So, as I pointed out in my last post, I'm no expert on finishing drywall. In fact, I've only tried to do some patch jobs here and there, and to say the work was less than impressive would be an understatement. However, I'm really happy (and a bit proud) of how well my latest finishing work went. I'm going to share the resources that helped me and the hints I found the most helpful.

After we had the sci-fi wall removed, we had two different drywall situations. There was a huge panel of drywall missing where they had to put in the support beam on top of the existing studs (a 6 foot section or so). That was going to require one seam to be mud and taped so it would blend in with the rest of the wall. The contractor also had to remove a 6 inch strip of drywall in order to tuck in the 2x4 supports. That area was much more tricky because we couldn't quite get the patch dry wall to sit flush. So, that area had some lumps and bumps to work around. 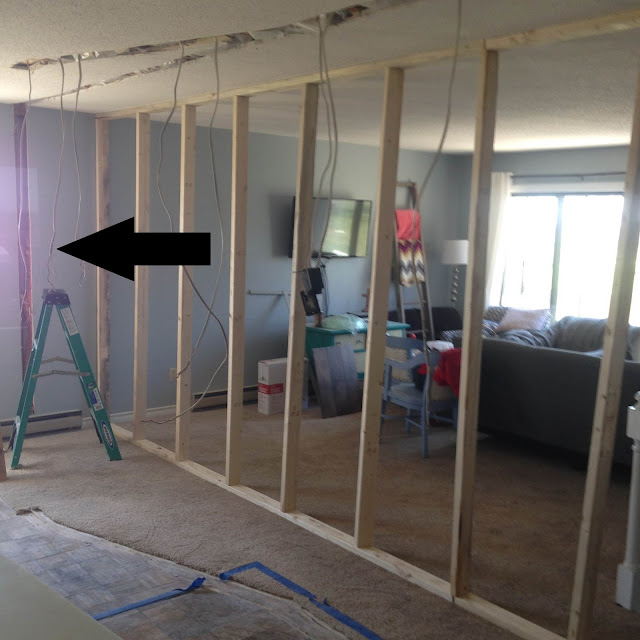 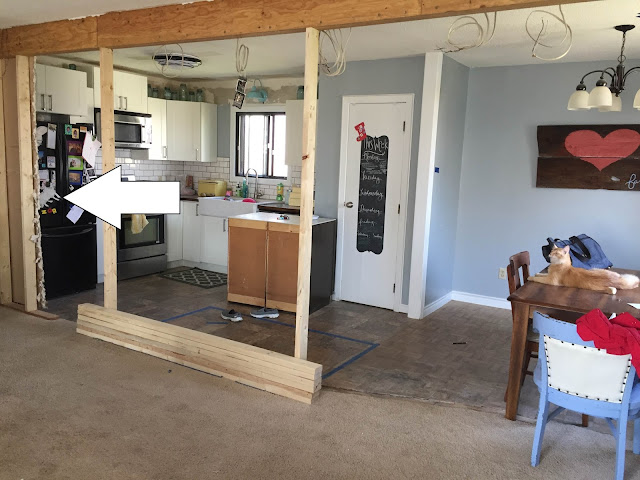 Finally, I've had unfinished drywall above my cabinets for about a year now, so I figured I may as well tackle that while I was working on everything else. 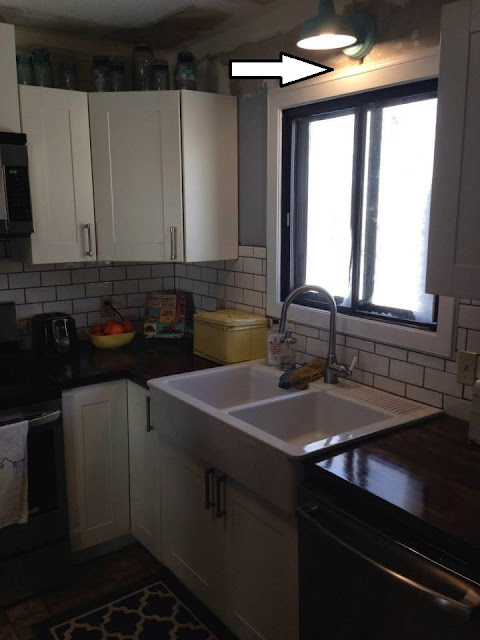 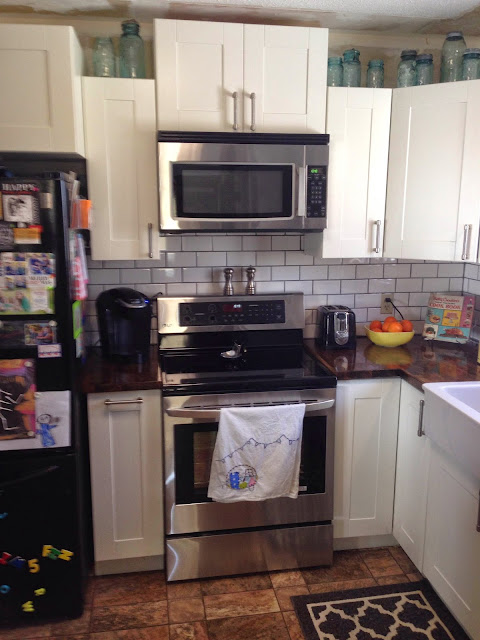 My husband cut up the drywall and put it up. Once he had the drywall up, I had to figure out this whole tape and mud thing. The first thing I did was read this article by Young House Love. I love how they used to (they no longer blog) give really simple explanations to different projects. It was a good place to start to get an idea of what I needed to do and learn the lingo and tools of the trade.

After I read that article, I moved on to YouTube. I watched several videos but I found this series of videos from a technical school particularly helpful. It was very simple and step by step. I would highly recommend watching the entire series from start to finish.

So, using those videos and various articles I read, I started the process. I think my mistake in the past has been not feathering the mud very well. Once I got the method of feathering the edges down, I noticed that my mud was blending much better. I also didn't previously know I should start with a narrow drywall knife and work my way up to a wider knife as I put layers on. Eventually the seam was about 18 inches wide.

Also keep in mind that the mud shrinks as it dries, so you will need more than one coat to fill in the screw holes.

I put my first layer of mud on and let it dry for 24 hours. Before I started the next coat, I would "knock down" (moving the blade lightly across the surface to scrape off any bumps or large ridges) any high points with a clean drywall knife/scraper. I did not sand between coats. When I was researching this entire process, I found that most pros did not sand between coats. The rationale was if you were smooth enough and feathered correctly, you could save sanding for the last step. That worked really well for me. 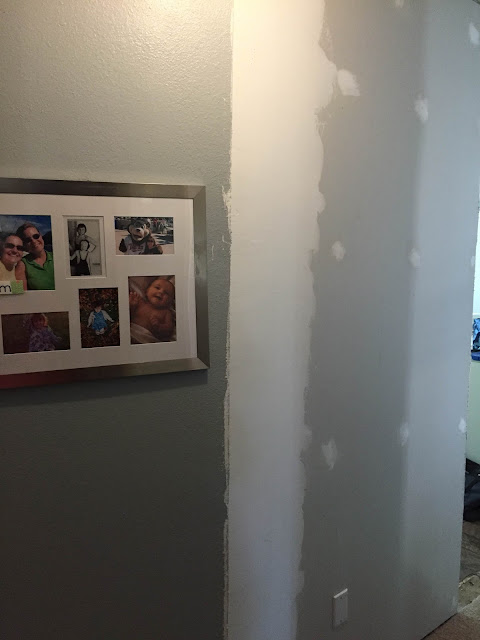 As you can imagine, working up from a 3 inch blade to a 12 inch blade took many coats. I think I ended up with around 5 or so. The last two coats I thinned out with some water. That was a hint I kept seeing thrown around and it really did create a nice smooth finish on top of the other coats.

For the 6" strip of wall that was uneven, I had to be a bit more creative with applying mud. I had to try to make the bump disappear slowly, so the mud kept going further and further out from the seam. I had to do more coats on this particular section just make sure that 1) a coat wasn't too thick where it would take days and days to dry, and 2) the tape on the high point was effectively covered so it wouldn't be exposed when I sanded it. It looked like a serious mess for the first 4 coats or so. 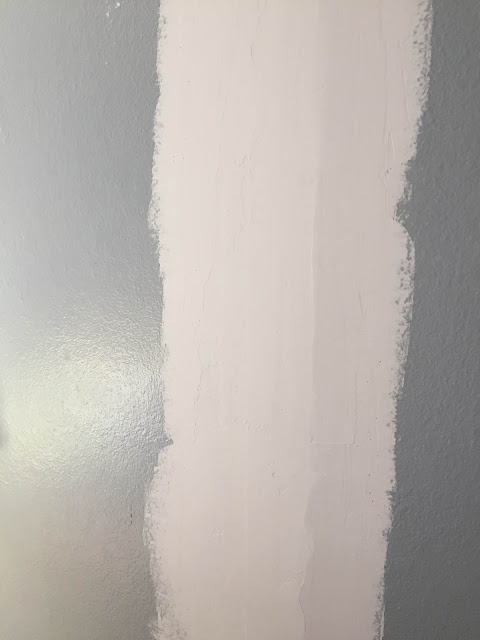 The area above the sink/cabinets had a hole I needed to fill in. I used some spare mesh tape to create a patch over the hole and then mudded right over the mesh. It took a couple of coats, but the hole disappeared.

Something a pro probably doesn't have to do (but I did) is go back through after my final coat and filled in any large divets in the smooth finish. So it wasn't a full coat, just a "patch" job on those areas that weren't even with the rest of the drywall.

I tried using a wet drywall sponge, but much like Young House Love, I found the sponge wasn't really all that helpful. I moved over to a fine grit sandpaper and dry sanded. It was definitely more messy, but was much easier to get a nice smooth finish. Most importantly, dry sanding allowed me to feel where there was still bumps or ridges as I went along. The final sanding went surprisingly fast. I didn't have to apply much pressure and was done within a half hour. 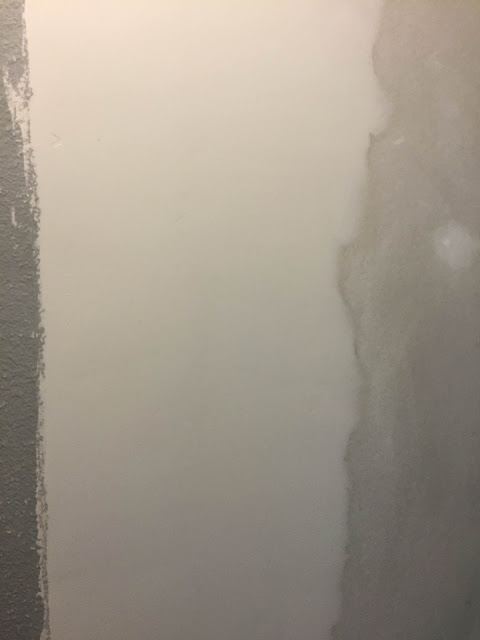 Once I was happy with a [mostly] smooth finish, I vacuumed the entire wall and started to apply texture. I had never noticed the texture on my walls until it came time to try and match it. Apparently it was a every man for himself project. The kitchen has no texture on the walls, the living room has a "normal" knocked down orange peel texture look, and the hallway was a random assortment. I used the Homax orange peel wall texture in a can. I used the water based version just so clean up would be a bit easier if things went crazy. I made sure to tape off areas with some drop cloths so it wouldn't spray everywhere (although I didn't bother with the floor since that's coming out within a few weeks). 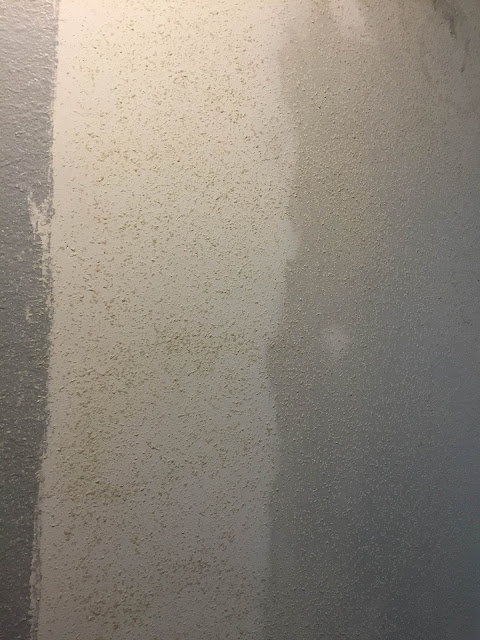 After texture, all I needed to do was paint the surfaces. I'm really happy with how everything turned out. Now, that doesn't mean I want to tackle this project ever again. I'll add drywall to the list of things I'll hire someone else to do in the future (along with tiling and laying pavers outside). 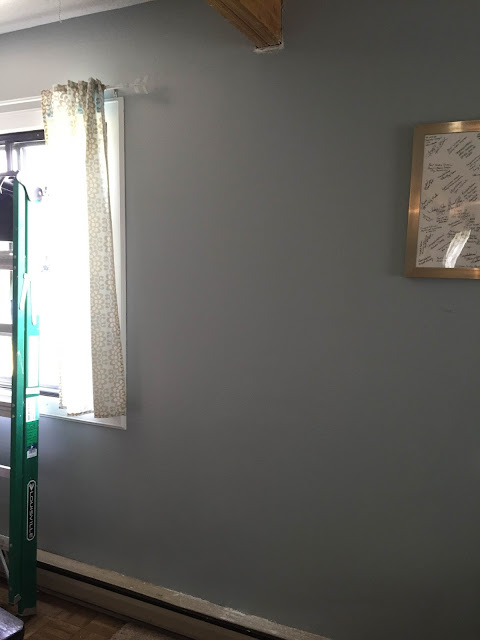 The area I patched is a 6 inch section directly below where the beam attached to the wall. Can't see it, can you? Success! 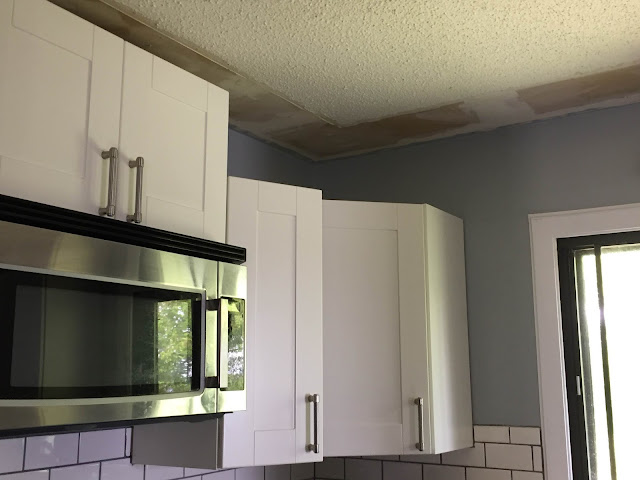 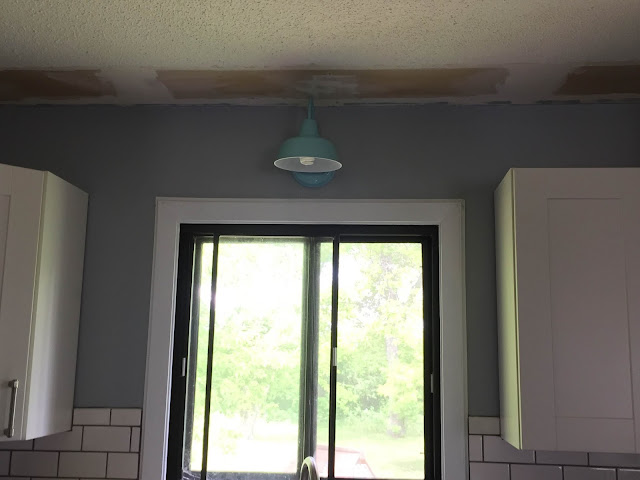 Since we're planking the ceiling, I didn't have to worry about finishing that area. 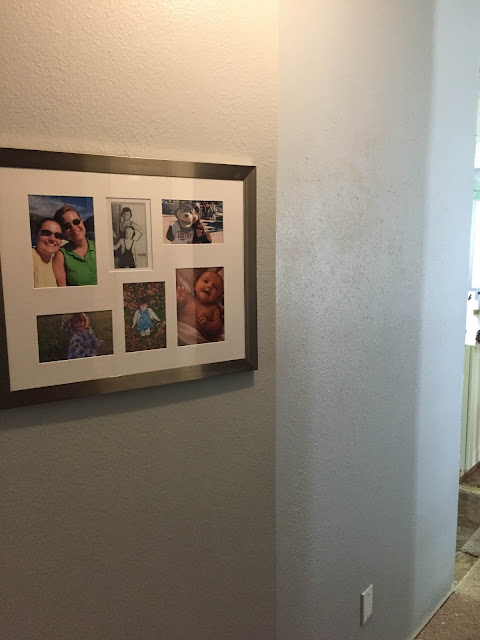 Hard to tell with the shadow of another wall showing, but there really isn't a seam showing. The texture isn't perfect on this wall, but I'm happy with the way it turned out.