Show & Tell: Art for Baby B 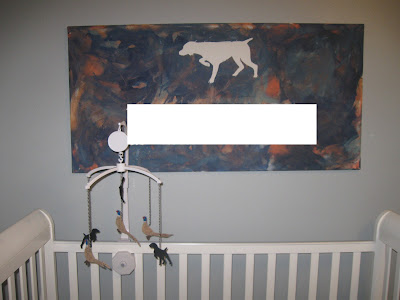 We decided (or maybe I should clarify, my husband decided) that we should keep the baby's name to ourselves until he's born. Our daughter's name was no question from the beginning. I had the name picked out from the time I was 8, and my husband liked it, so there was no discussion.

This little baby boy took much more discussion. Eventually we found two names that we liked, and finally I decided that one was better than the other with the middle name that was picked out years ago.

It's be quite quite difficult to keep it to ourselves. I slipped to my mom once (she claims she didn't hear it). I also have done a couple of projects with the baby's name and I really really really want to share them, but I can't. (Boo!)

Our nursery theme is "hunting lodge." I'm thinking hunting lodge like in the time of FDR. If you're from South Dakota (or have visited), I'm thinking the lodge in Custer State Park. Rustic, old and does not feature cameo from one end to the other. So I've been trying to use browns and oranges and greys. Works out well because my husband is a bird hunter, so his idea of hunting is some tan duck cloth and blaze orange.

One thing I knew from the minute we were expecting, is that the major piece of art over the crib would be done by our daughter. I thought it would a cool way to get her involved in the nursery, because, if I were her (and I suppose at one time I was since I'm a big sister to a little brother as well!) I wouldn't be so happy about little baby getting all this new stuff and getting to sleep in the same room as mom and dad!

After some Pinterest searching and thinking, I decided that with a 2 year old this method would work the best: I cut the name out of vinyl. I also cut out a silhouette of a pointing dog. I knew this would make my husband quite happy since he's in love with our german shorthair pointer. (and keeps saying things like "Little Boys should have puppies".....hmmm. I think new moms would agree that getting a puppy and baby at the same time is less than ideal!)

After I cut out the vinyl with my Silhouette, I had my daughter go to town painting it. I would use one color at a time, let it dry, then paint the next coat. I helped fill in some of the gaps along the way, but for the most part my daughter did everything. On the last coat while the paint was still wet, she (not me!) pulled up the vinyl (she had quite a lot of fun with this since they are basically giant stickers!) 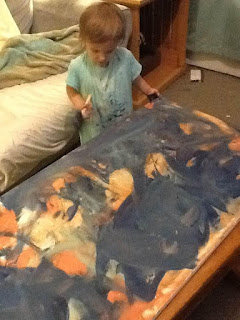 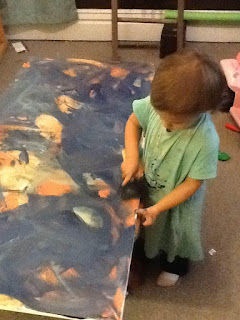 I can't share the name, but I can share the pointing dog. Once we have the baby I'll have a detailed post of the nursery to share (and better quality pictures). My daughter knows she made it. She often points to it and says, "Lila painted for baby brother!"