It's a blistery morning here in South Dakota. Our new puppy takes about a millisecond to go outside before he's whining and shivering to come back in.

We finally finished up "stage one" of Ugly House's kitchen remodel. There's still a ton to do in what I've dubbed "stage two," but the initial remodel is complete. Woot Woot!

As a reminder (as if you could forget the red), this is what the kitchen looked like before we moved in: 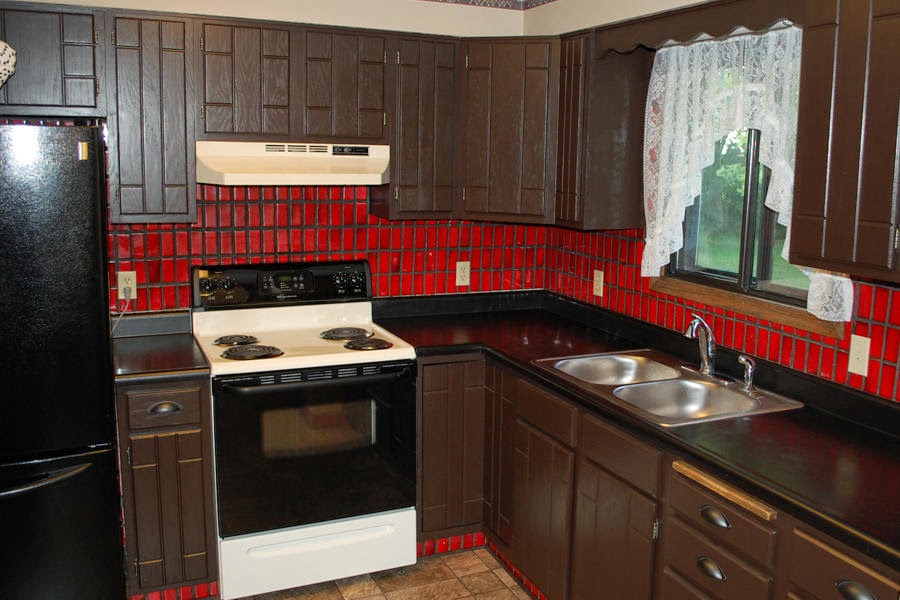 Note that in addition to the red tile that was both on the baseboards and on the ceiling, there's a soffet with a rooster border, the world's smallest sink and some pretty beat up sliver inducing brown cabinets. Also, there was hardly any counter space and no dishwasher.

This is the kitchen as of today: 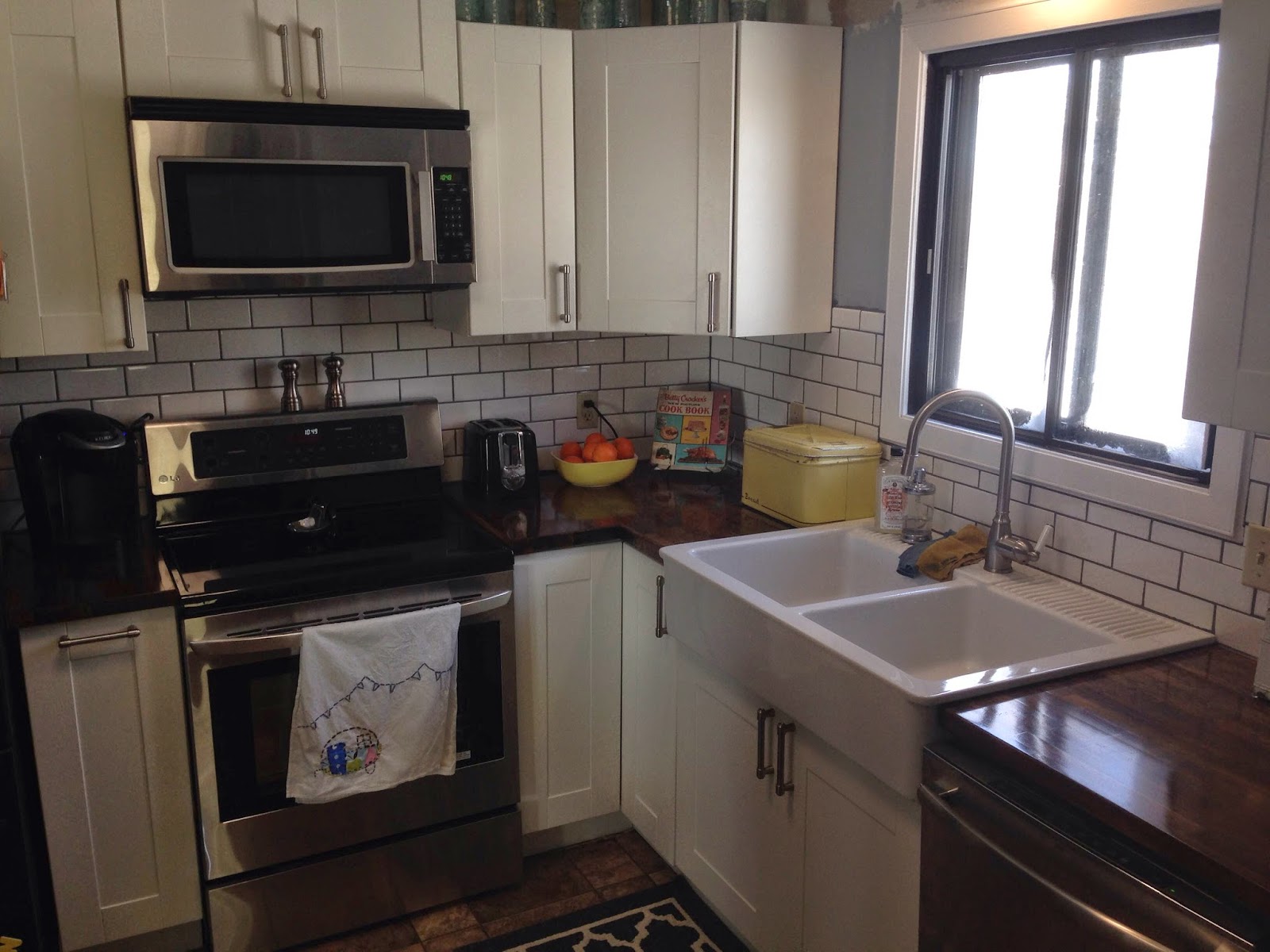 We just finished up the subway tile backsplash. I won't go through a complete tutorial, because to be honest, I probably did some things incorrect. Instead I'll steer you to the tutorials I did use as well as some of my tips that weren't mentioned on the various websites I looked to.

First of all, I used two main tutorials from some trusted resources. The main source was the Family Handyman website. I especially liked their grout tutorial. (Located here). This was the tutorial we printed out and referred back to often. I also watched this tutorial from DIY Network, which was also helpful. (Tutorial and Video located here) 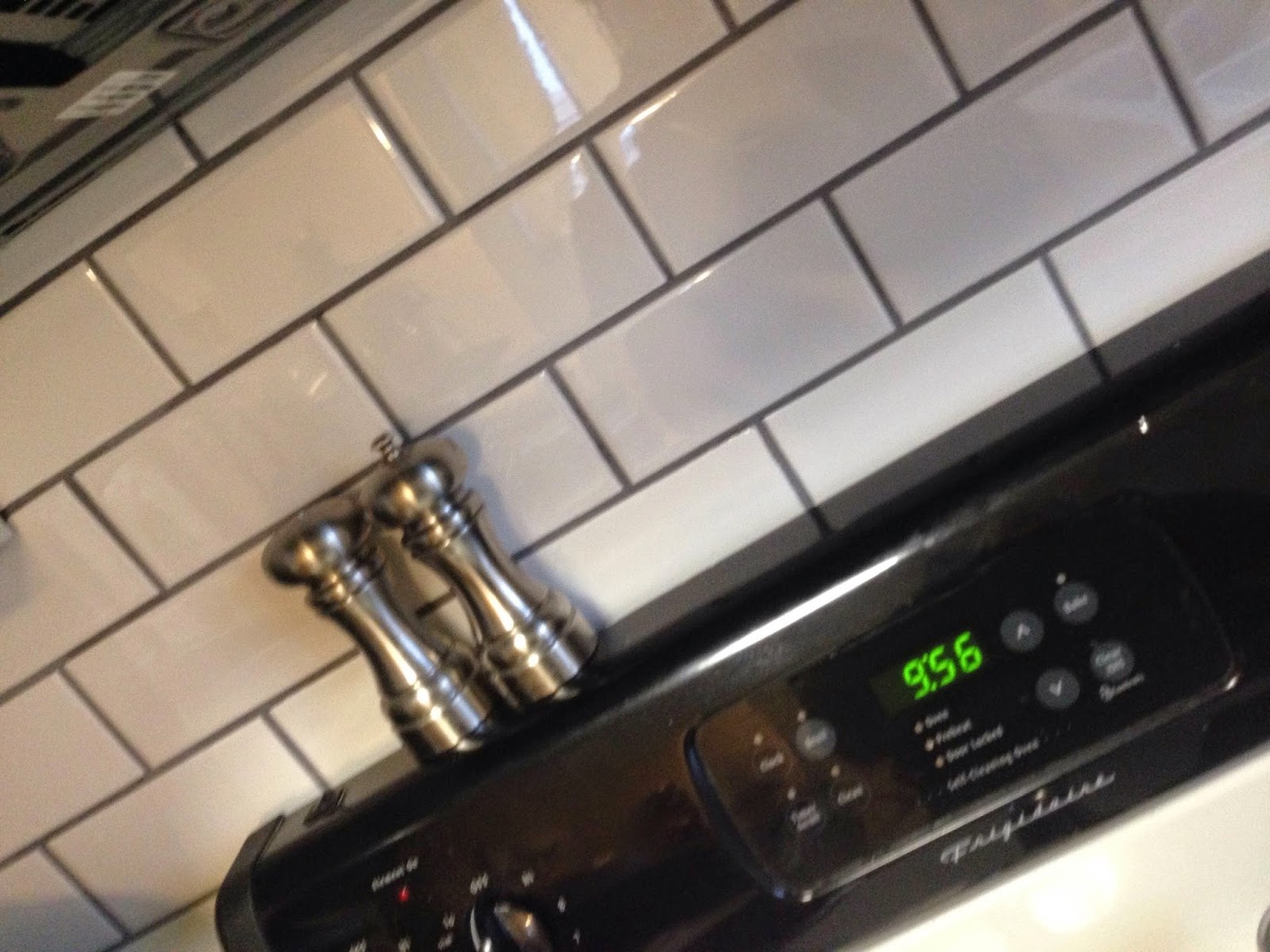 
Tile: 3 x 6 inch white subway tile bought at Lowe's. We have a fairly small area and used two boxes of tiles with only 15 or so left over. The tile is cheap (around $0.22 a tile), but you will break quite a few trying to cut it especially if you don't use a wet saw.

Spacers: We realized after we bought the spacers (and opened a bag) that the "x" type spacers we bought wouldn't work with this type of offset design. Duh. But luckily we had bought some wedge spacers for the bottom. We ended up using those for all the spacers. We went with a 1/8th inch spacer.

Grout: Mapei brand bought at Lowe's in "Pearl Grey." 1/8 inch is the in between of sanded and unsanded grout. We could have gone either way. We opted for unsanded because I prefer the smooth look. We also decided to go the way of powder rather than the premixed grout. It was pretty easy to mix and we could mix up just the portion we needed. We used 1 bag and had a bit left over. Lowes also sells the matching caulk.

Tile Adhesive: We decided to go with premixed adhesive. I don't know why I wanted this premixed and not the grout, but I am happy with that decision. We went with the big bucket and it was WAY too much. We used only 1/3 of the adhesive, and it doesn't really stay good once you open the bucket. We should have gotten two small ones so we could have returned what we didn't use.

Tools: We got help from the Lowe's associate when it came time to pick up all the little tools and gadgets. We got a tile scorer, and it worked really well for straight cuts. Cutting around outlets was a big pain in the arse. We tried the tile nippers and scorer at first, but it didn't work very well for some of the more complicated cuts. After the first night of my husband cursing my name, we went and picked up a $16.00 Dremel diamond disc tile cutter. Totally worth the extra money. It made it much easier to get some of those complicated cuts done. I also went back and got a laser level. That was a HUGE help. So save yourself the trouble and get a cheap laser level. 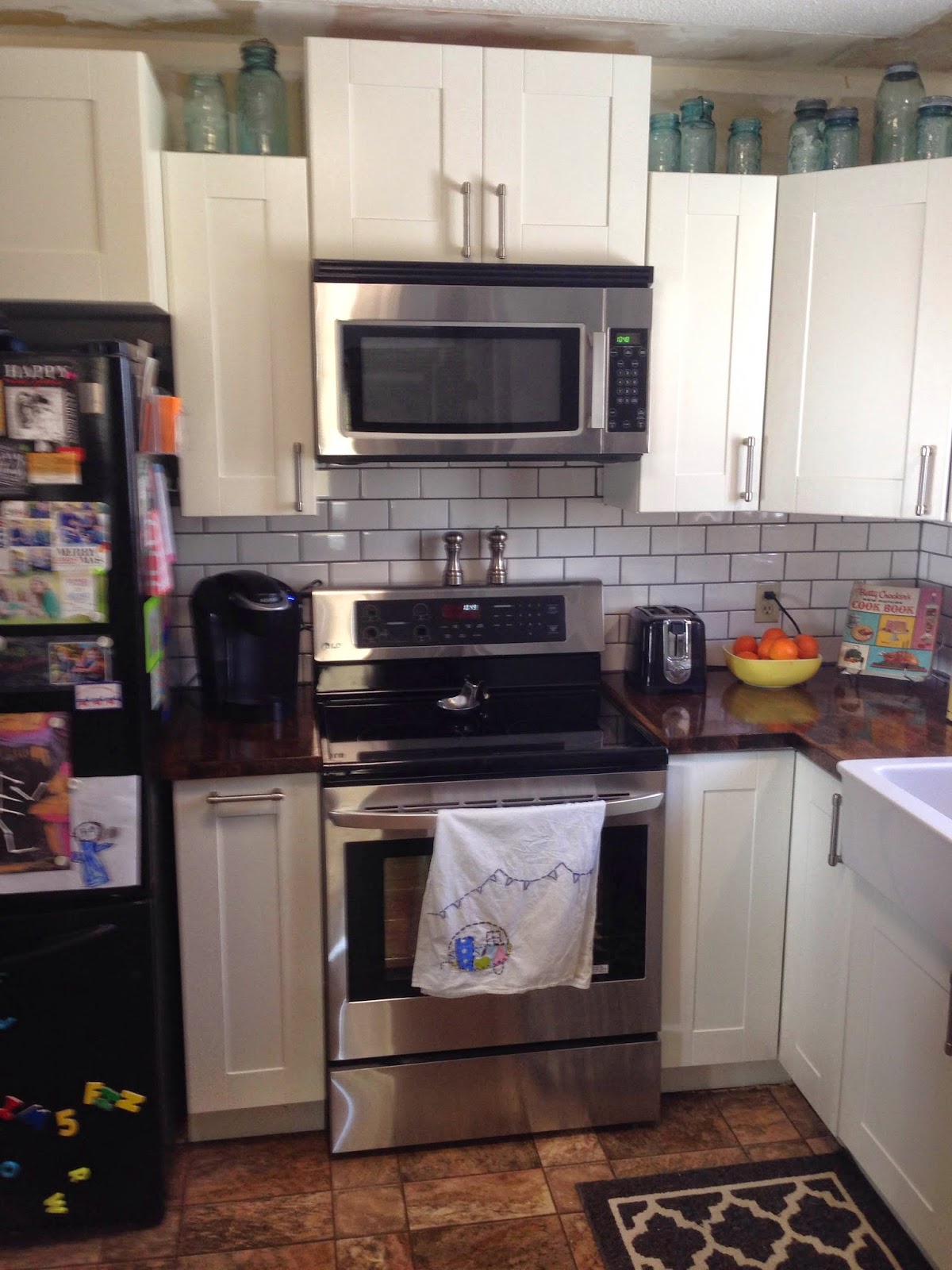 A new oven was my Christmas gift and it's looking pretty darn stylin' in my kitchen! 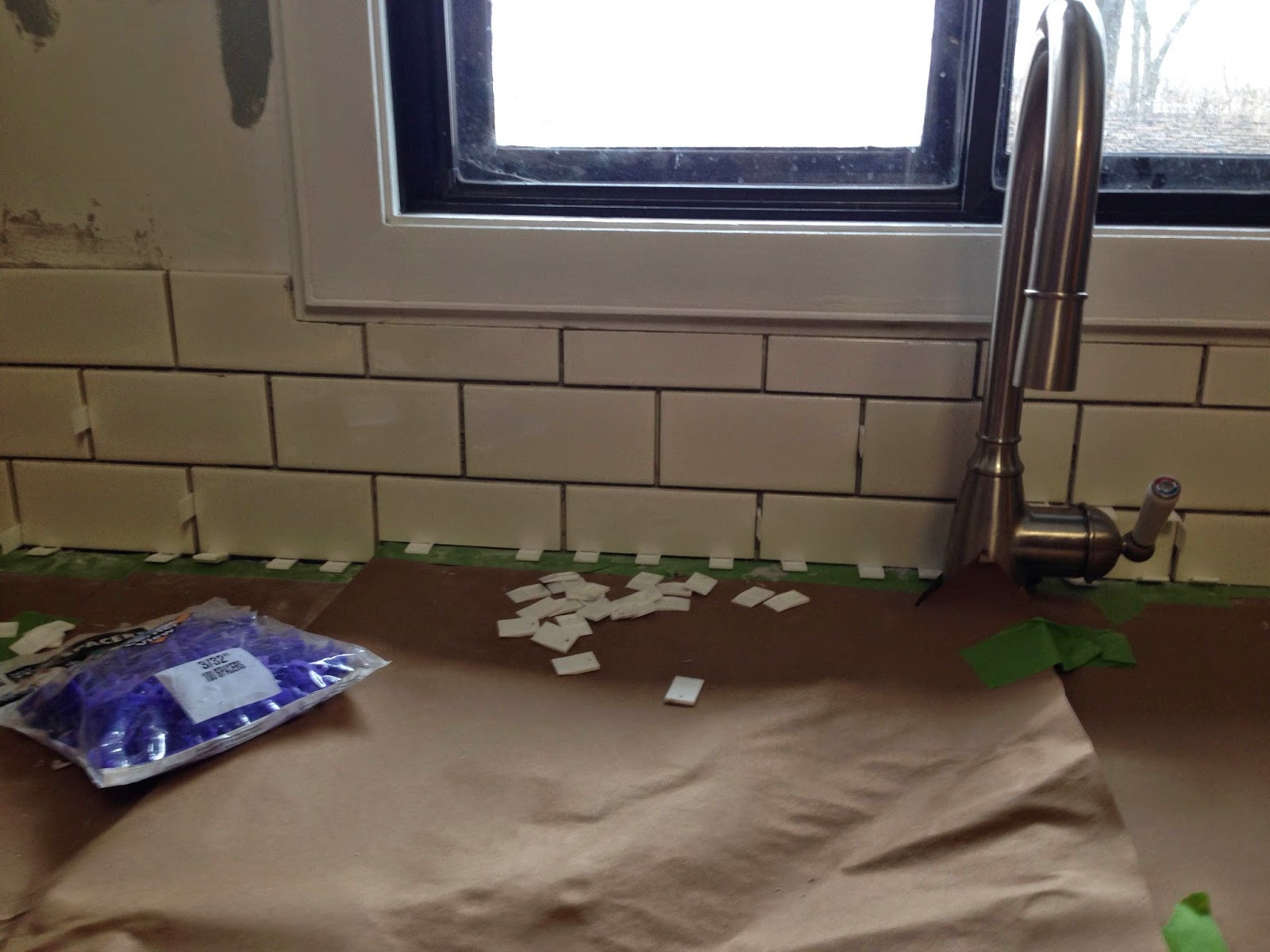 I forgot the contractor paper to put over the countertops during my first visit to Lowe's. We ended up going back for that before we started. It's located in the painting section with drop cloths. 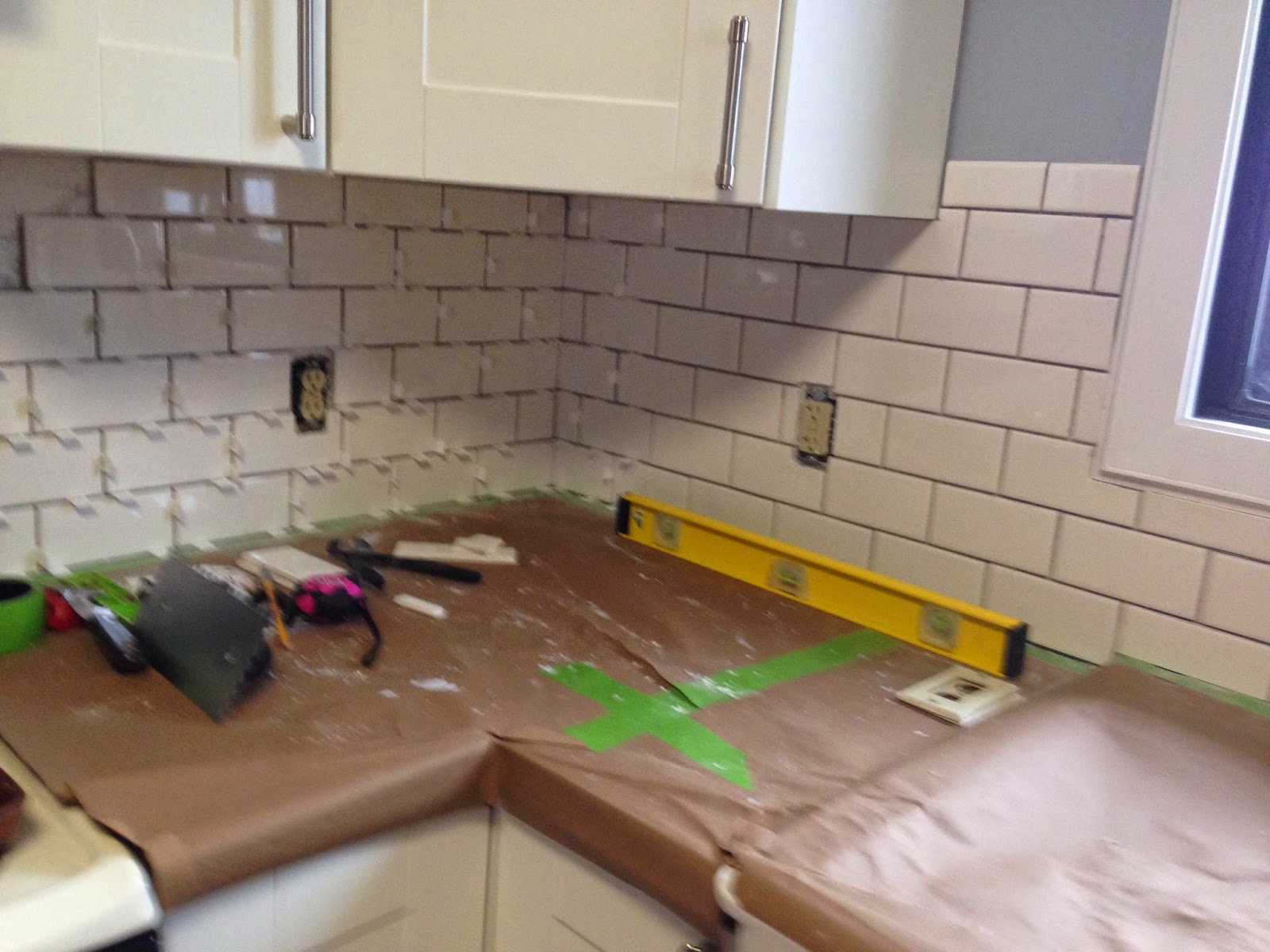 Don't forget to turn your power off when you're working around outlets. 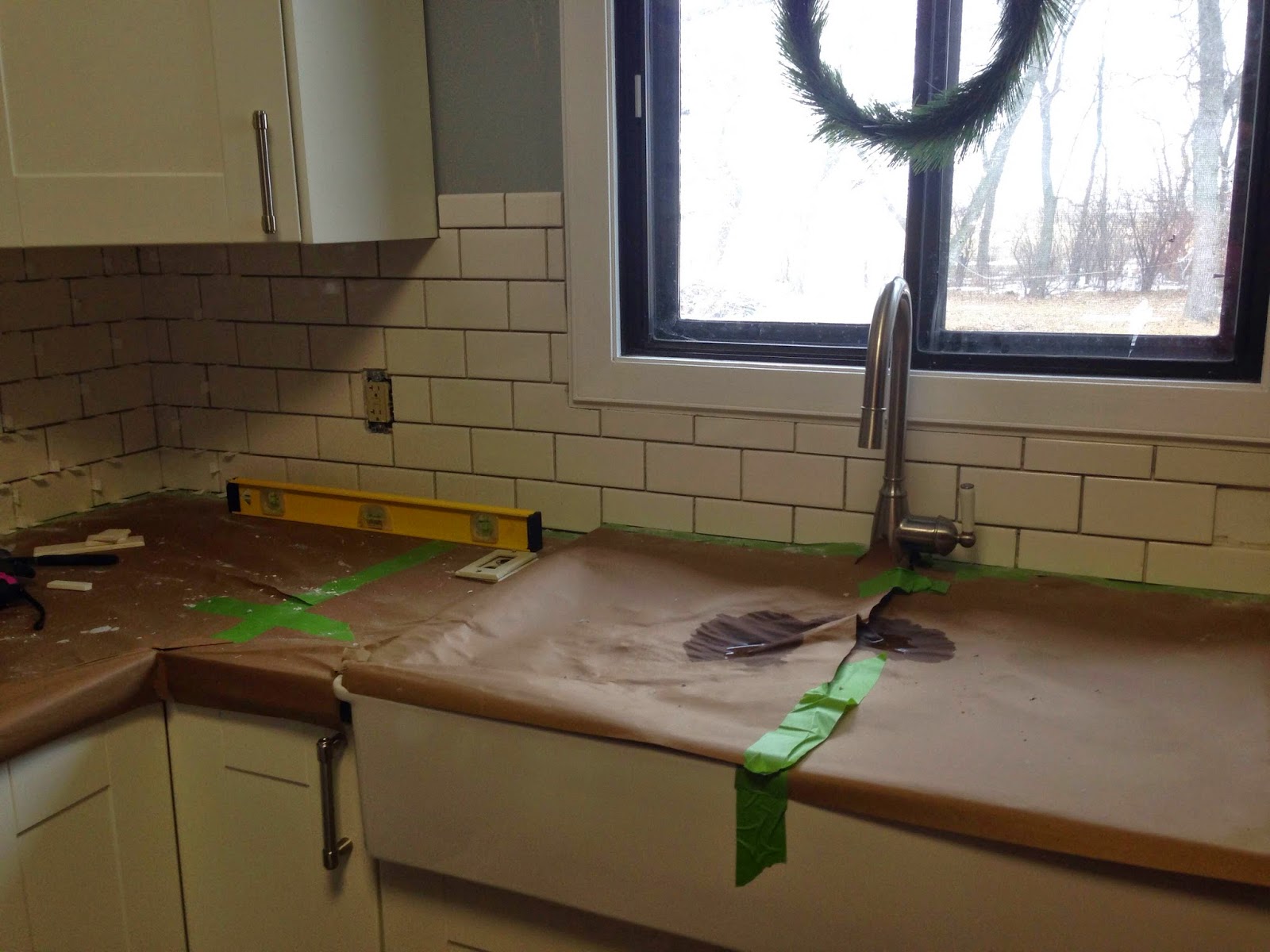 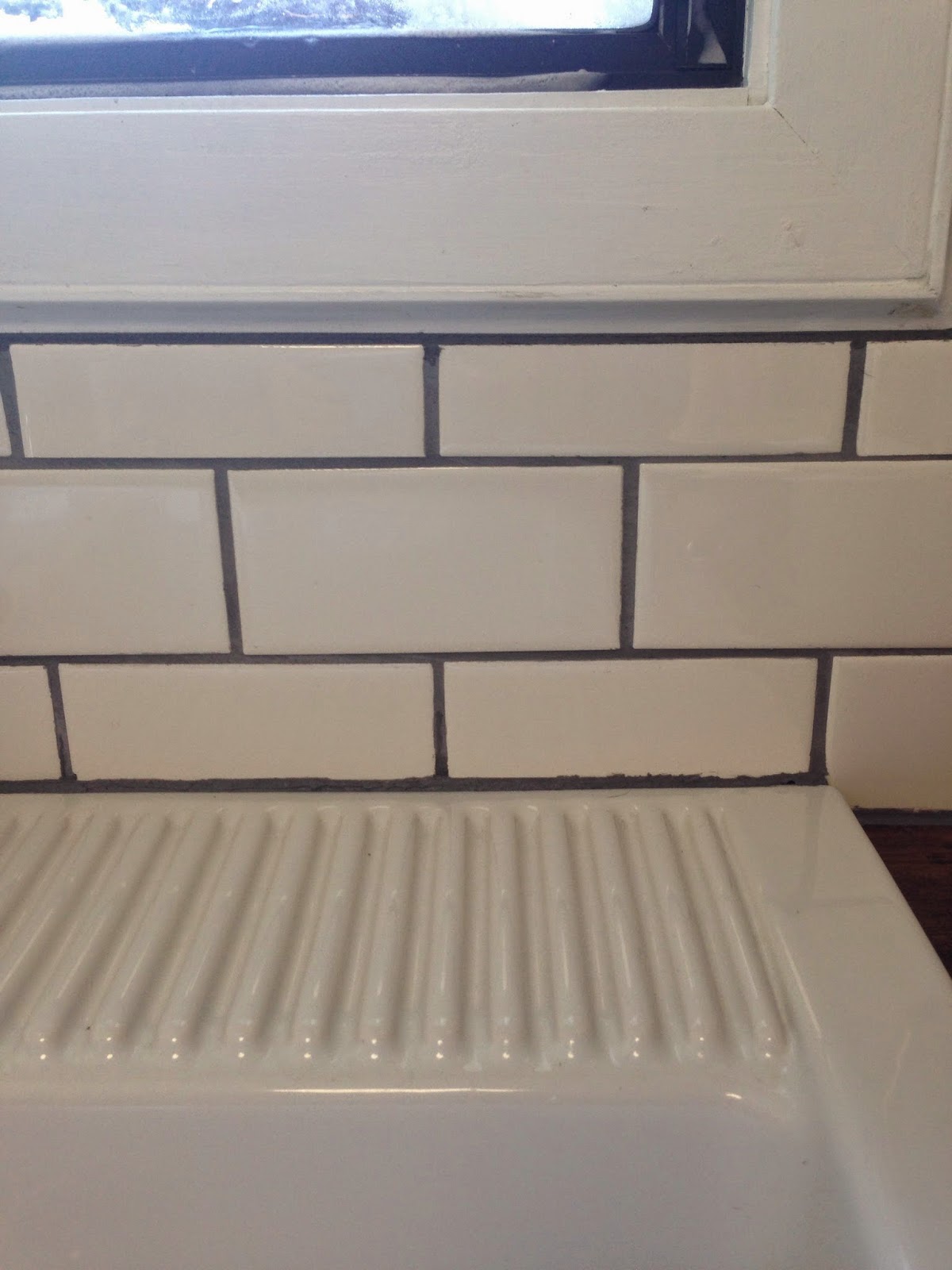 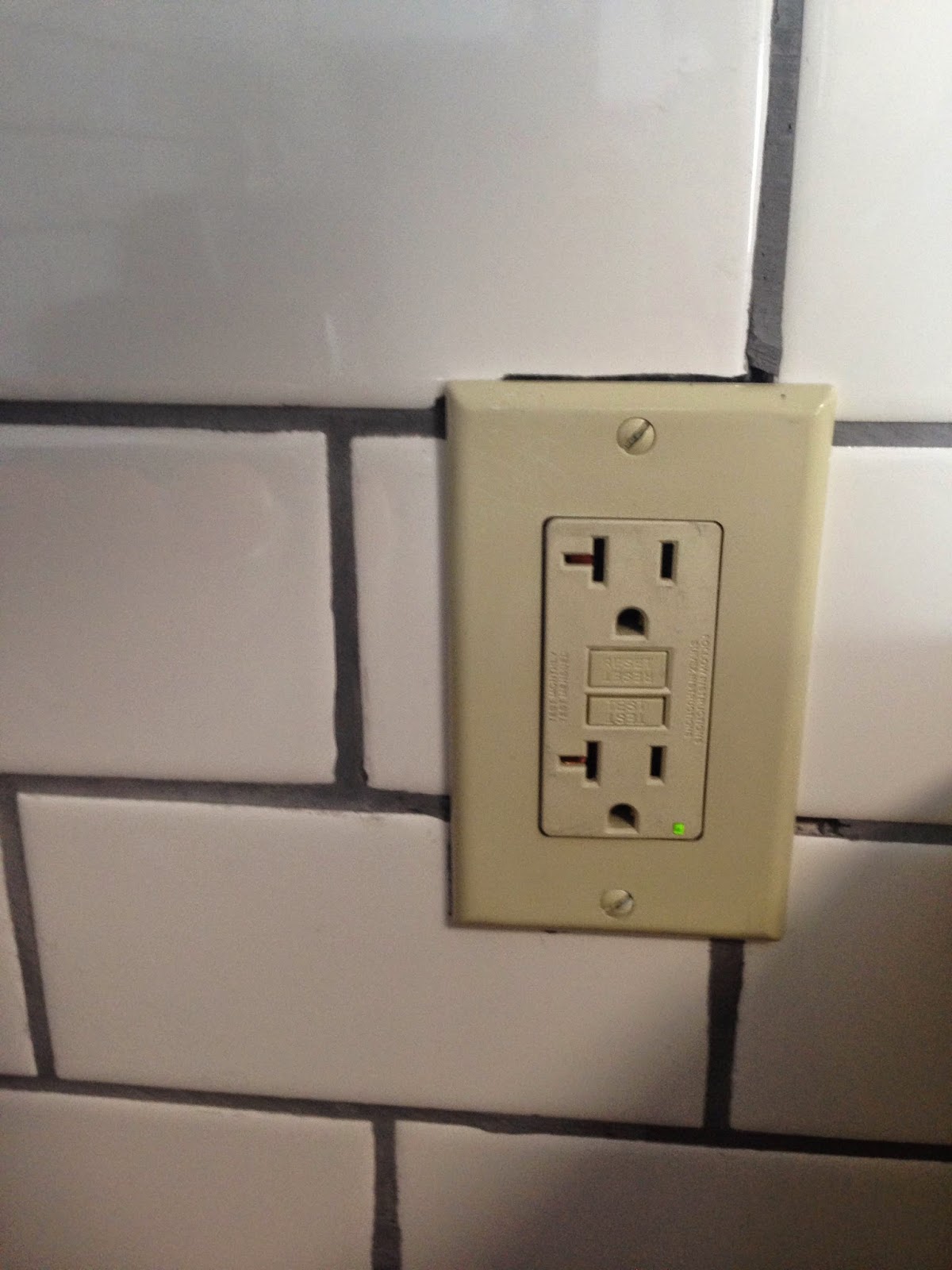 We had thought we had a good cut here, but not so much. We're replacing all the outlets with white, and when we do that, we'll get a oversized cover to cover up this oops. 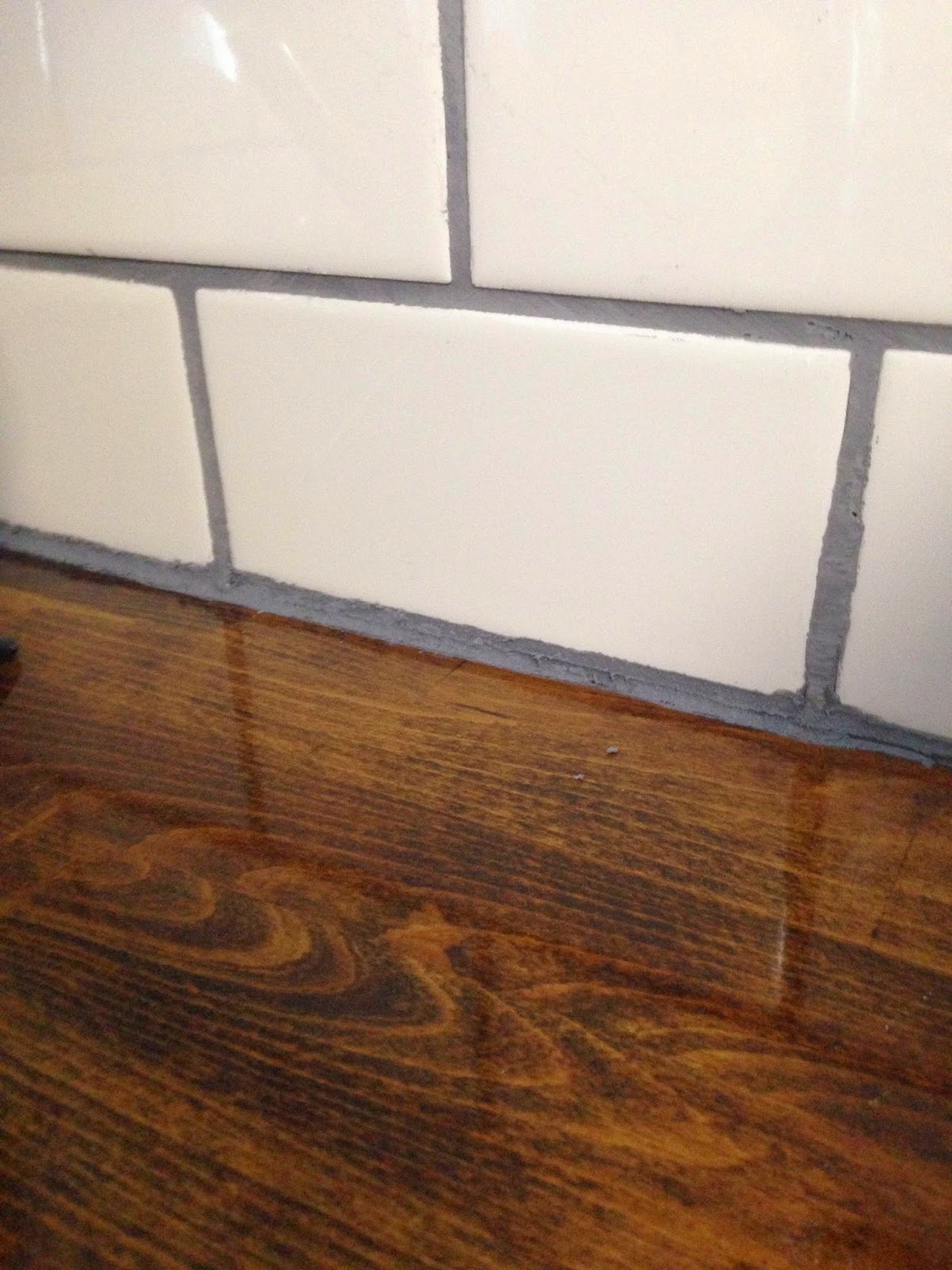 This was the big oops section of caulk. I had the tape too close to the wall and when I pulled it up, it pulled up the nice pretty caulk line. So now there's a ridge in the caulk that will drive no one crazy except me. 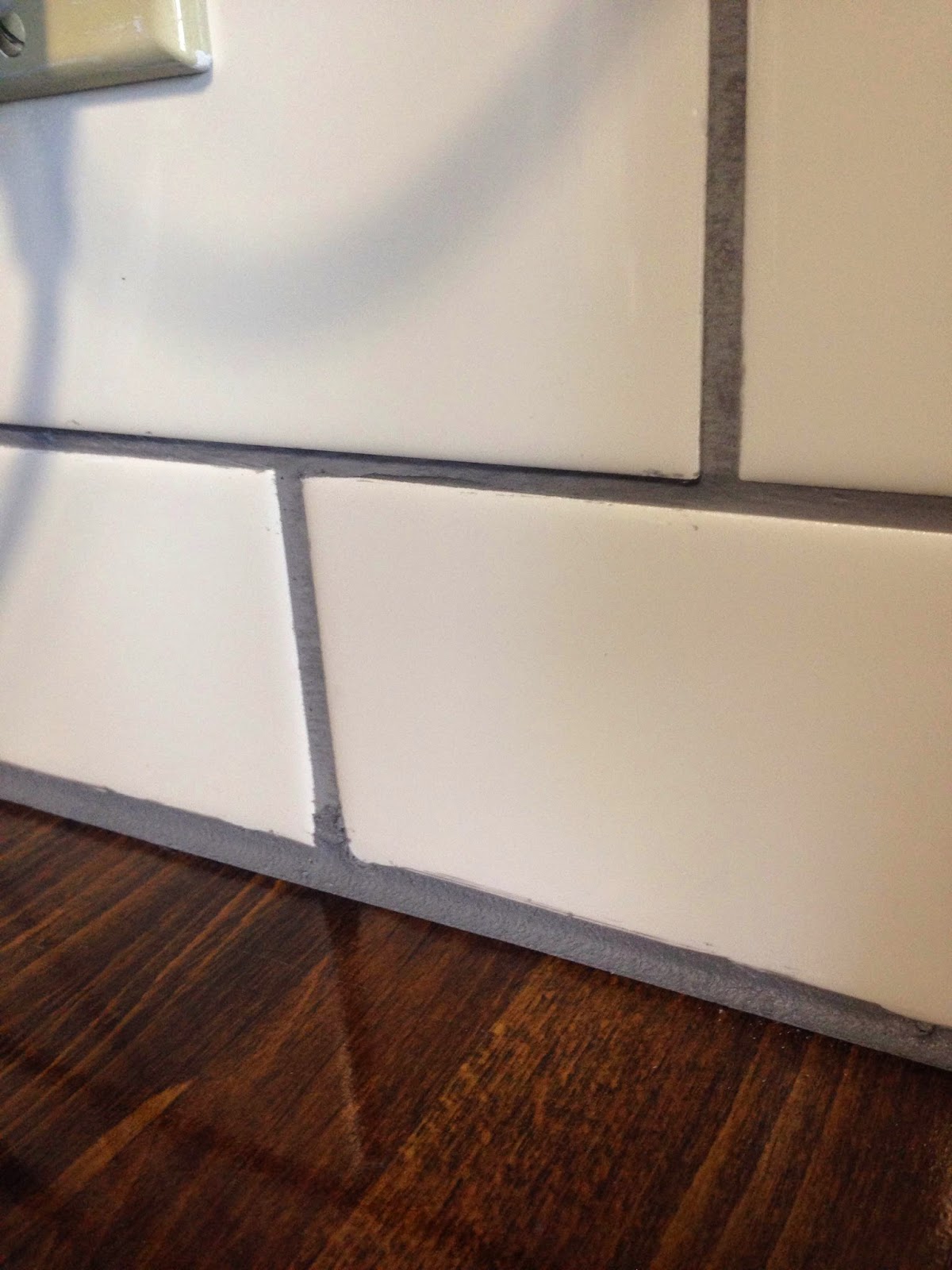 This is where I learned my lesson, and put the tape further from the wall. If you get big smudges on the tile, you can scrap them off with your finger nail. I would let the caulk dry a bit before do that though, since you don't want to mess up the caulk line you have. However, the caulk doesn't come off the countertops once dry. 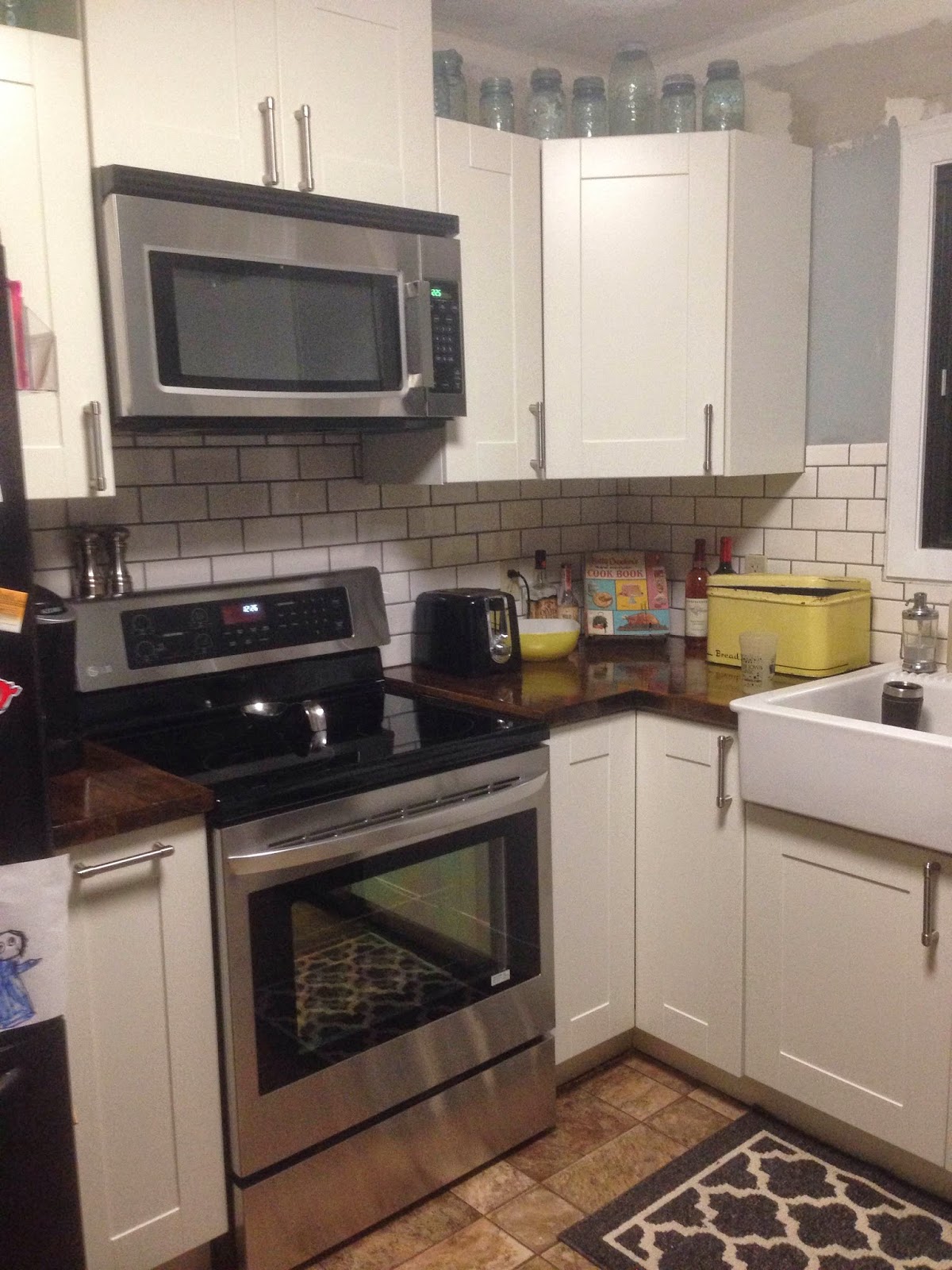 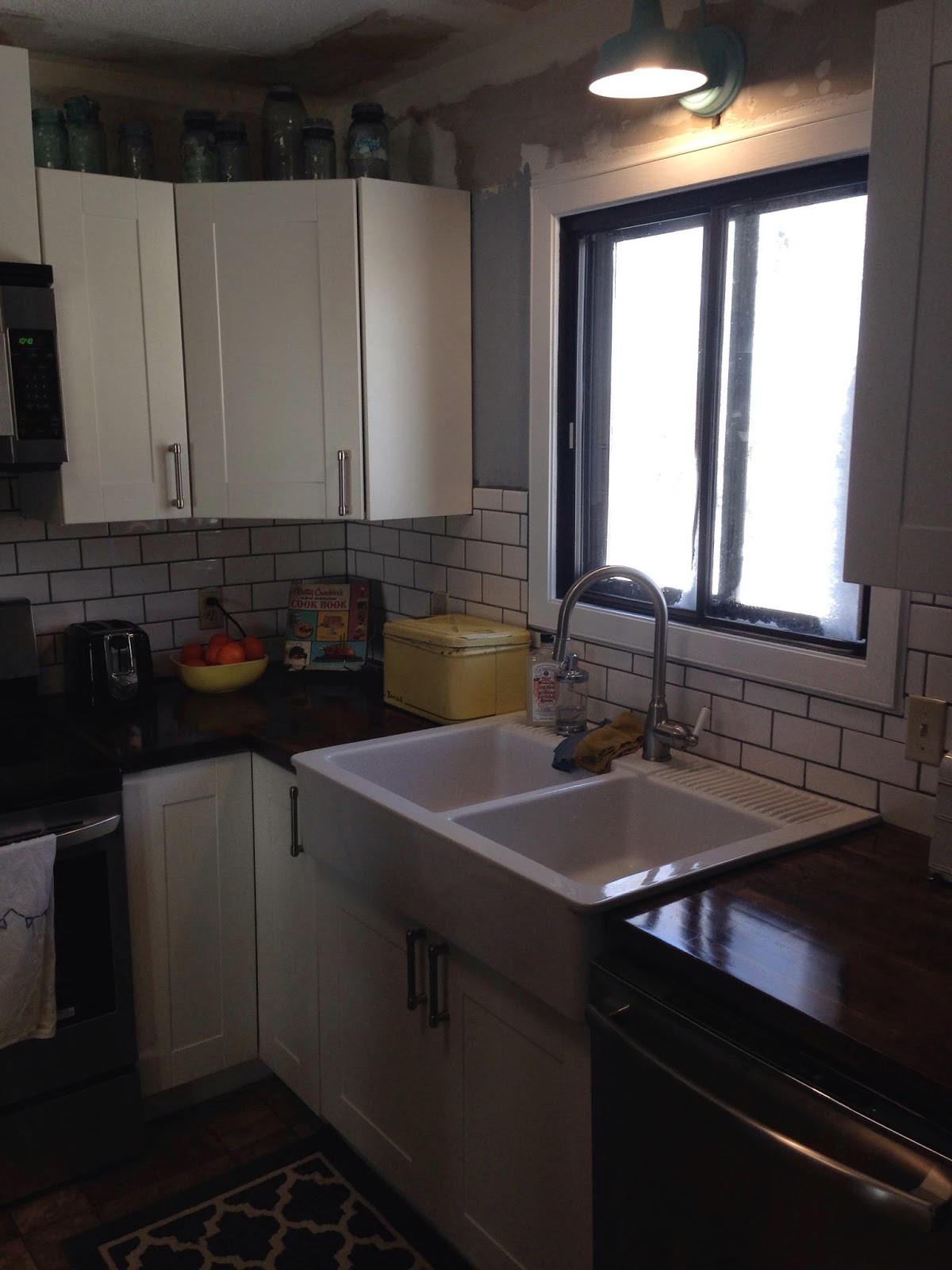 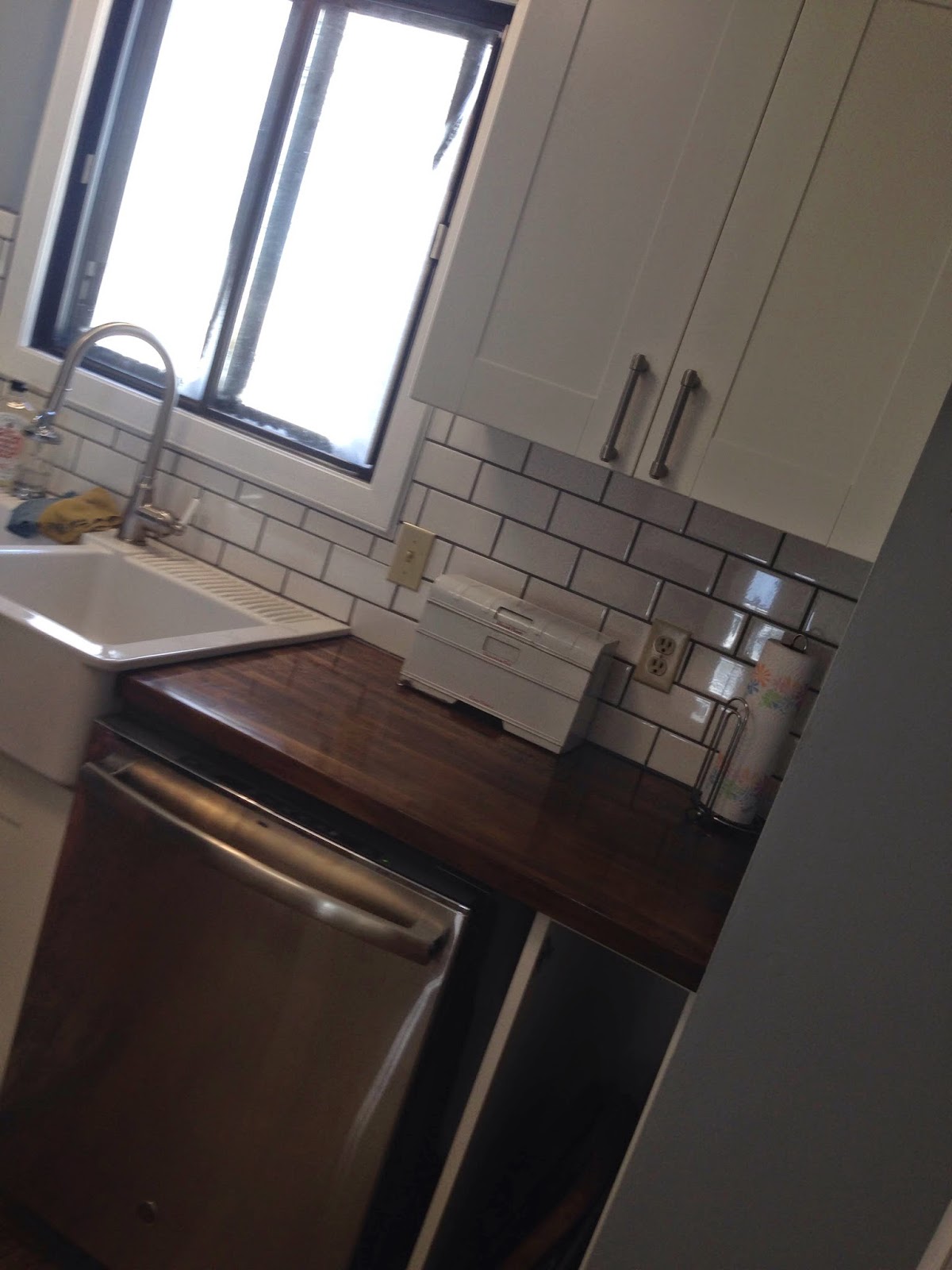 We also need to cut down the cabinet front for this cabinet my dad modified for the smaller space. 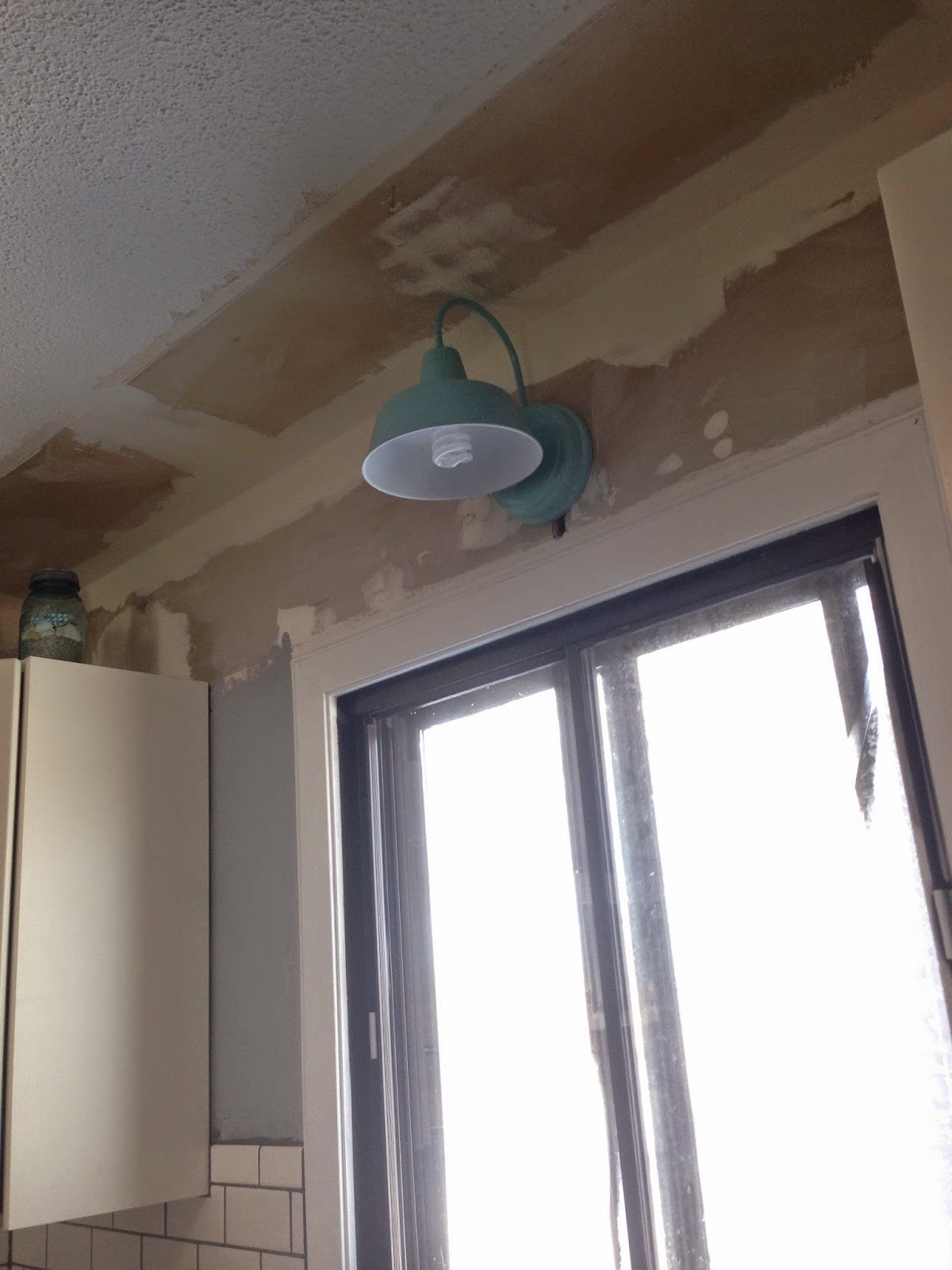 We still need to finish up the newly exposed wall from removing the soffet. 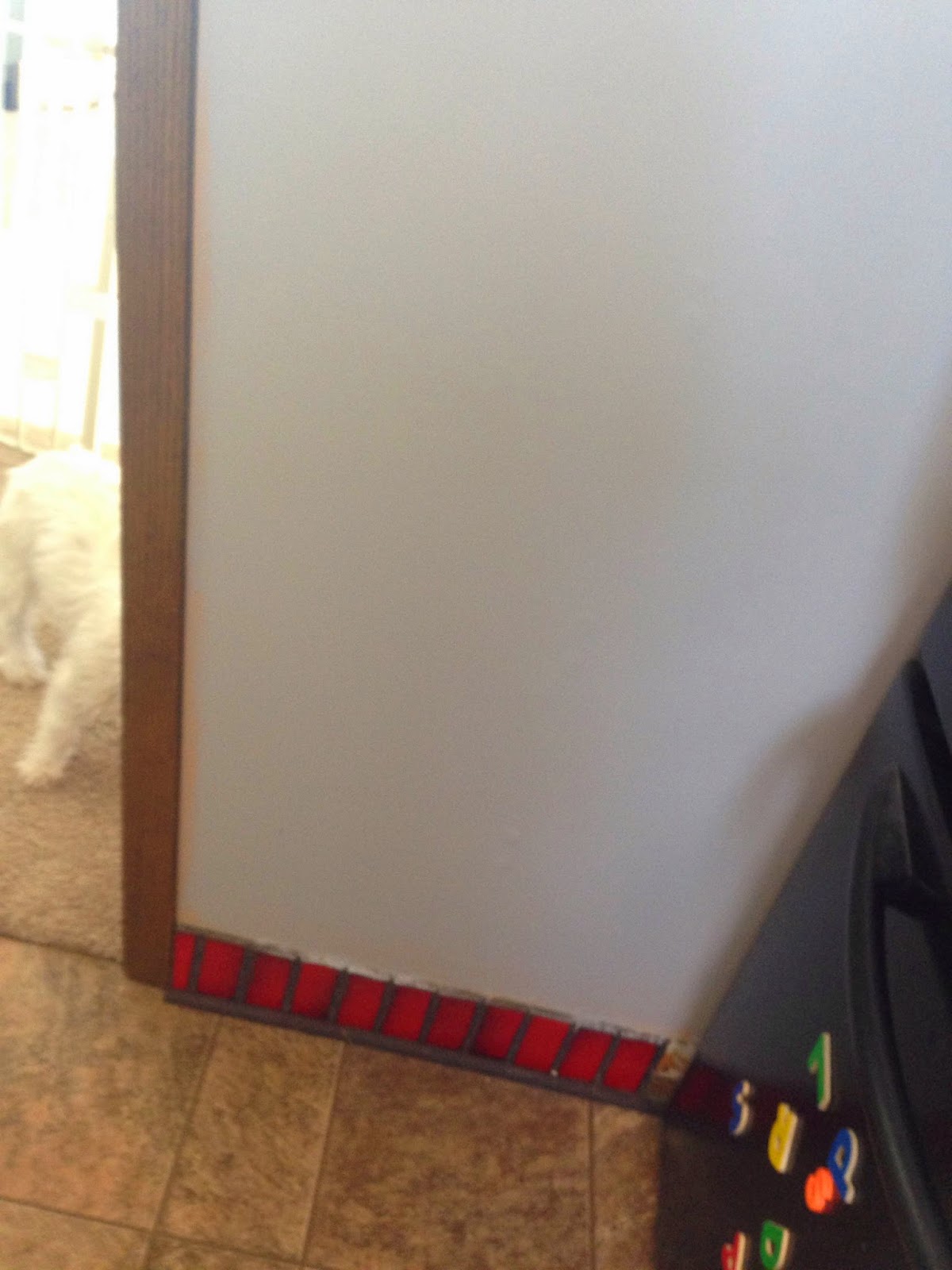 Never fear, some of the red tile remains. We are removing part of this wall, so we haven't gotten too crazy about pulling this tile off. 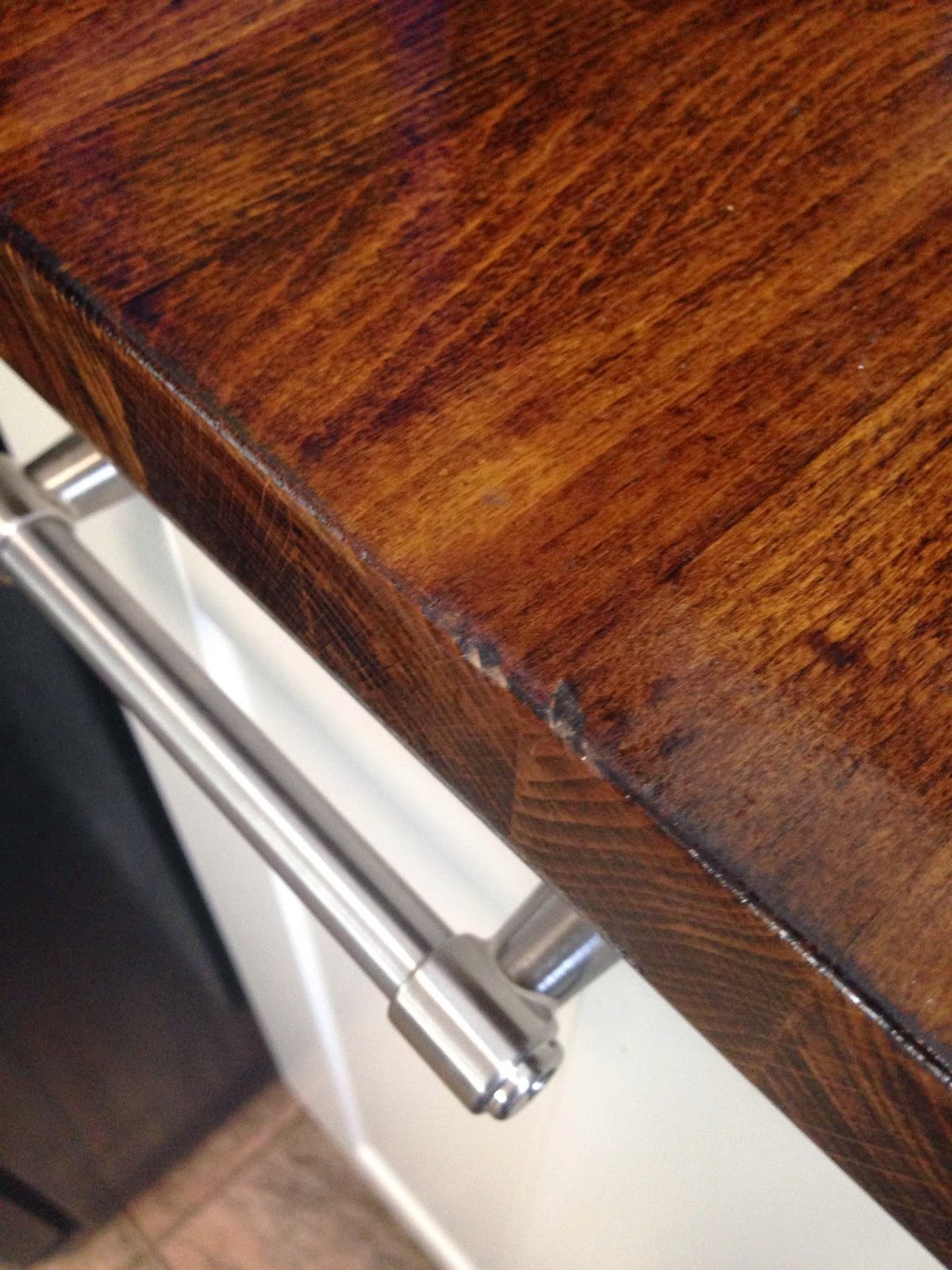 My husband scratched up the countertop installing my new stove. I bought a stain pen in the same color as the stain I used and it helped quite mask the scratch quite a bit. 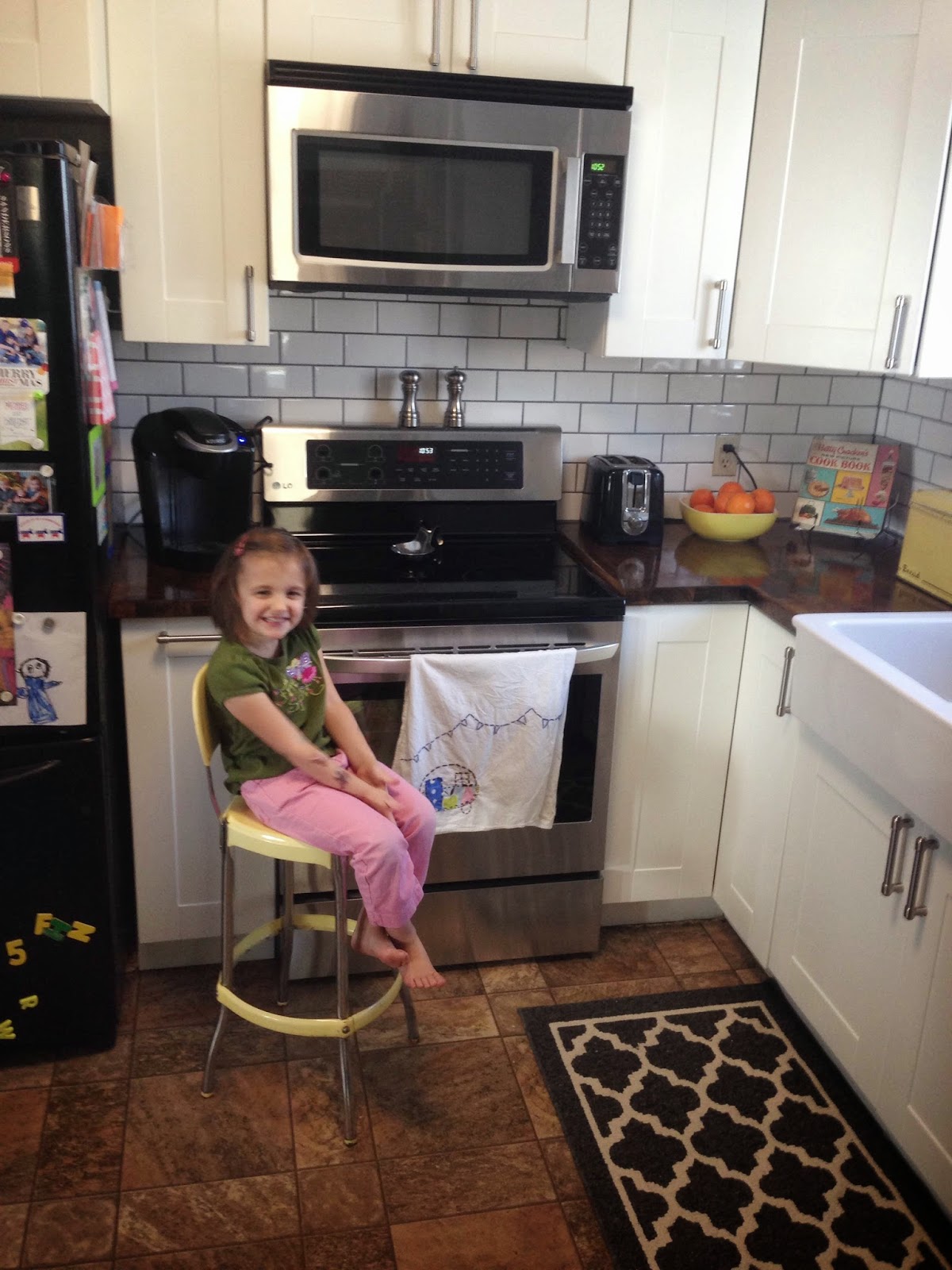 My daughter wanted to model in the kitchen. I picked up the vintage stool to match my other vintage yellow accessories. It's already been used many times over to help mix up cakes and cookies. 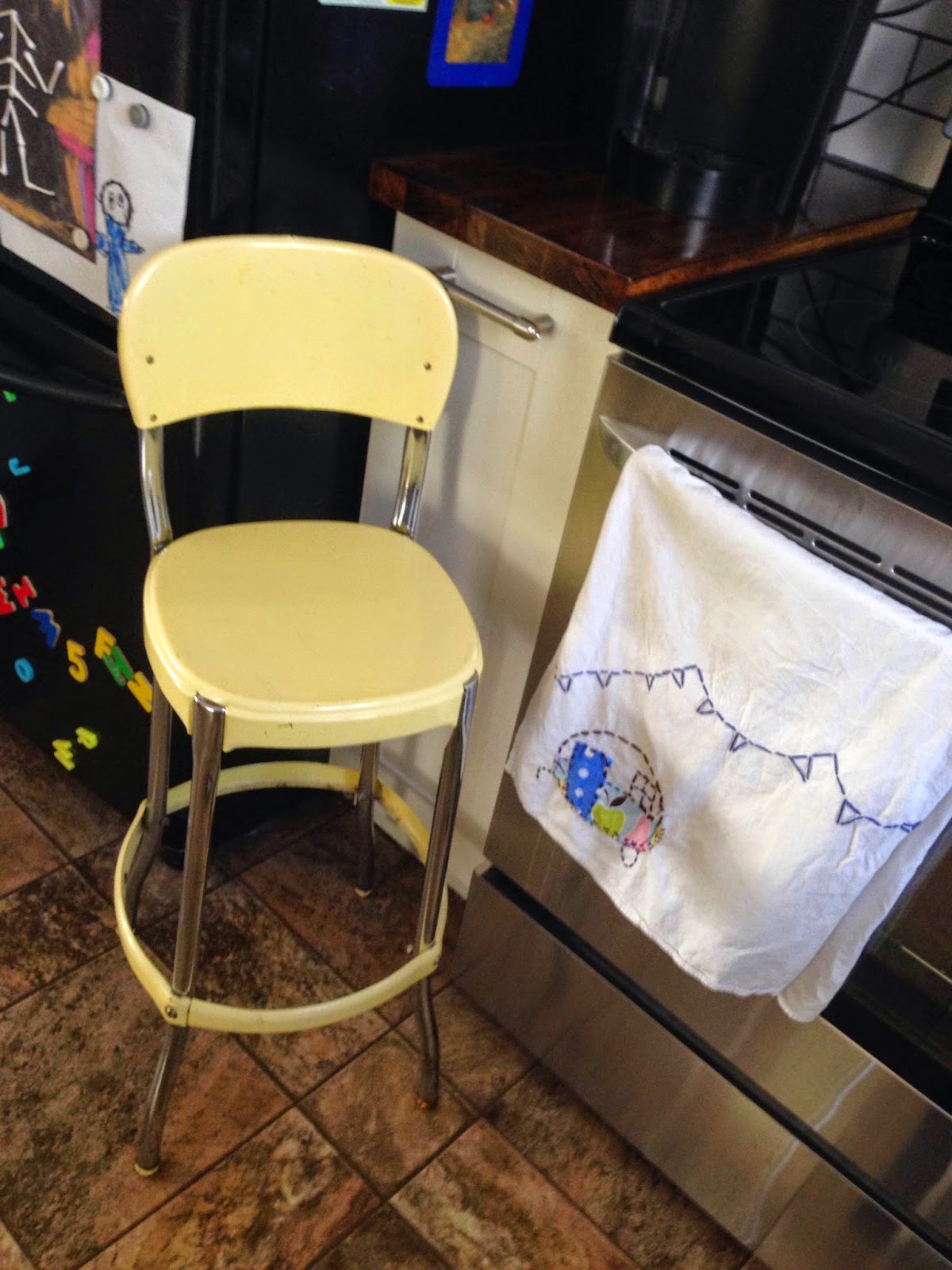 In case you made it this far, this is what "stage two" of the kitchen remodel looks like:

1. Remove wall between kitchen and living room. It's a supporting wall, so there is some extra considerations with removing it. We're thinking that it's a happy problem though because we're probably going to wrap the support with some rustic wood.

3. New lighting in dining room and above island. Probably add some lighting to the pantry and changing the outlets out at the same time.

4. New laminate flooring throughout the first floor of the house. Laminate makes more sense with three dogs than hardwood does.

5. Plank or bead board ceiling installed throughout the first floor.

Yes, a laser level was a huge help. Brilliant post!!

I'll try Remove wall between kitchen and living room. Thanks!