I finally finished up a huge project in the front of our house, and I couldn't wait to share. I was going to do a step by step tutorial, but these were measured out to custom fit our space. However, I will give you all the ramblings necessary to create your own planters!

When we moved into Ugly House, there was landscaping rock around the house. We thought about getting rid of the rock, but after some discussions, we decided that we didn't mind the rock. Not to mention we removed a small patch of rock, and it took over two days of hard labor. Uh no thanks. The rock will be there for the next 50 years.

However, one thing we hated was how much rock ended up on our front path and in the lawn. The only edging that was used by the previous owner was that short plastic type. Every time my husband went to mow, it was like he was shooting a rock machine gun. He just had to hope the rock missiles didn't hit a person or property.

If we were going to keep the rock, we had to do something with the edging between the lawn and pathway. We finished up the edging between the lawn and rock, but I'm waiting for more rock before sharing that project. We had to put our thinking caps on when it came to keeping the rock off the path. We could use brick like the rest of the project, but the pathway was not straight, and it wouldn't have looked right. We decided on a flower bed, but my husband made a valid point that our dogs would destroy anything that wasn't elevated. 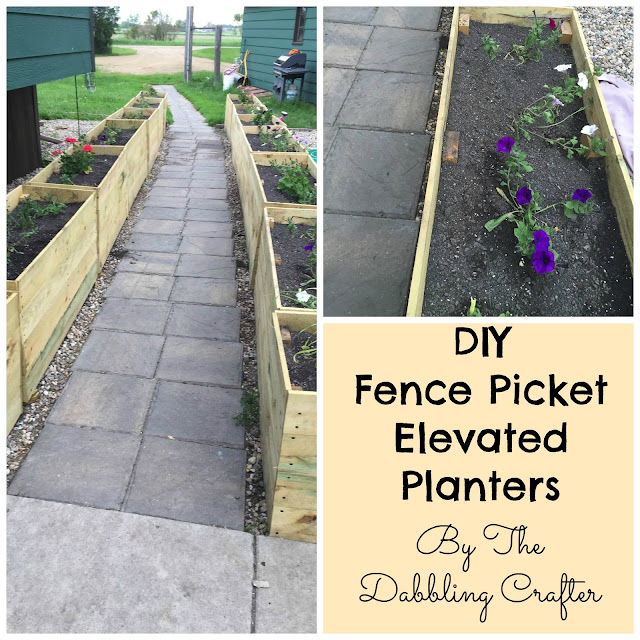 So, it was decided that we're going to make some elevated planter boxes. A ton boxes. If we would have used regular treated pine or cedar lumber, I would have had to sell Ugly House to finance it. One extremely affordable option is fence pickets. If you're going to grow editable plants, make sure you don't use treated lumber (chemicals + food = bad). You will want to use ceder fence pickets. That is still an affordable option ($2.00 per picket). Since I knew I was going to be using flowers, I used treated pine for $1.04 per picket.

Now was the hard part. Math. My husband is the math wiz in our house, but he couldn't envision what I wanted to do. I sat down and figured out how wide to make each planter to maximize each fence post. I measured how long the area we needed planters for and played around with my measurements until I could get 1 planter from 8 fence pickets. In the end, I ended up with over a 100 fence pickets plus some treated wood 2x4's for the supports. When I cut the fence pickets, we took into consideration that we needed to cut off the dog eared top. Those small dog eared tops were helpful to level out each planter. Every inch of material was used in this project.


My Clamps, My Lovely Lady Clamps

Through some trial and error, we found the best way to make each box was to do the long sides first and then attach the shorter sides to each long side. One way to keep everything nice and tight is to use clamps. I used one large clamp to keep the wood close together and then used a small one to keep the support close to the fence pickets as I drilled in. I also set up an assembly line where I just did long sides until I had 6 or so and then put together the planters. I found that best so I wasn't moving things around in our garage so often. You will be drilling from the front back, so be prepared to sit awkwardly as you drill from the bottom up.


DEAR GOD, SO MUCH DIRT

These planters are deep. Like I might lose a child deep. And potting soil isn't cheap. So, I had to come up with a solution to fill in the planters. We did the two small square ones with popcans, and that worked pretty good. But I would have had to take on a serious pop addiction to even get close to filling the other planters. And slept for 3 weeks after the inevitable caffeine crash. After playing around with some different things in the garage, I found this solution. Two buckets turned upside down with a piece of sheet insulation on top. That created a false bottom to the planter. You could also just make a false bottom out of treated wood. (We got all our buckets for free from the local ag center) I drilled some holes in the insulation for drainage and then stapled in some landscaping fabric. You will want to make sure your planters are in place and level before adding anything into them (buckets, soil, plants, small children). They won't be easy to move once you start adding items to them. Without anything added, they are going to heavy. I have bruises on my legs weeks later from carrying them out. And my chest feels like I have a elephant sitting on it from dead lifting the potting soil bags.

Ta Da! 14 huge planters made, filled and planted for about $300.00 bucks. Not a bad investment for such a large impact. 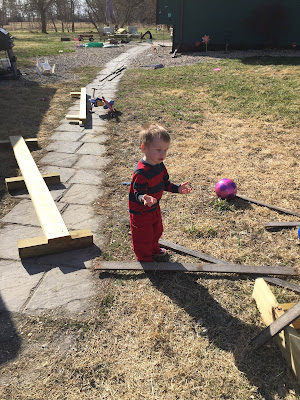 Here's a picture of the walkway before we started our edging and planter project. And my adorable sun creating a boat out of scrap wood. 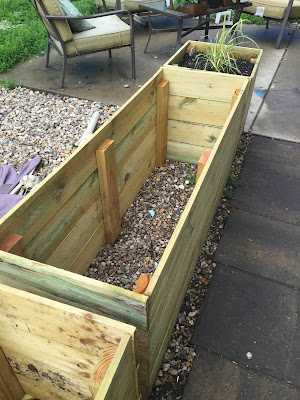 A completed planter ready to be leveled before getting anything added to the bottom. 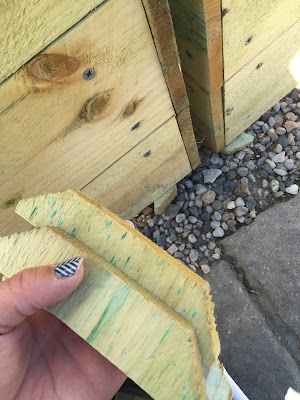 My DIY wood shims were the tops of the fence pickets. They worked great. If you put the angles facing out, they look like feet and more finished as a result. 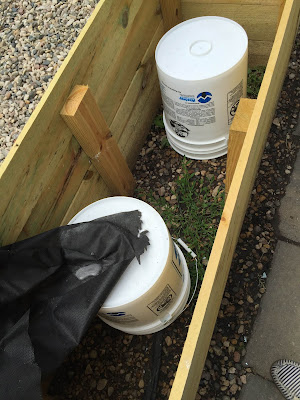 Buckets in the bottom of the planter. 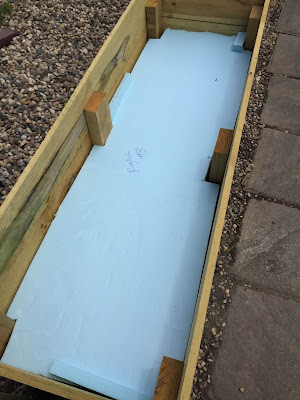 Sheet insulation cut to fit perfectly into the planter. I used a utility knife and jigsaw to make each cut. 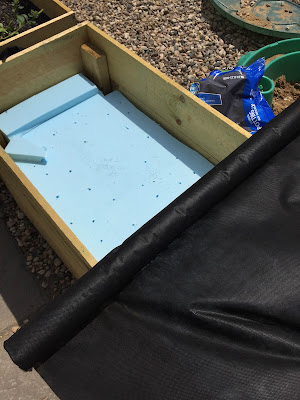 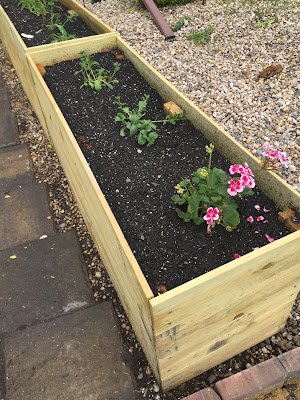 Finished planters! I wanted to keep the flowers simple and cheap this year since we had the expense of building them. I chose wave petunias that hopefully with spread out and over the sides. 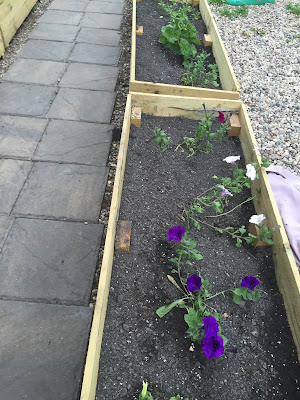 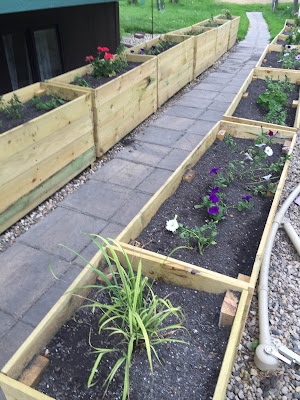 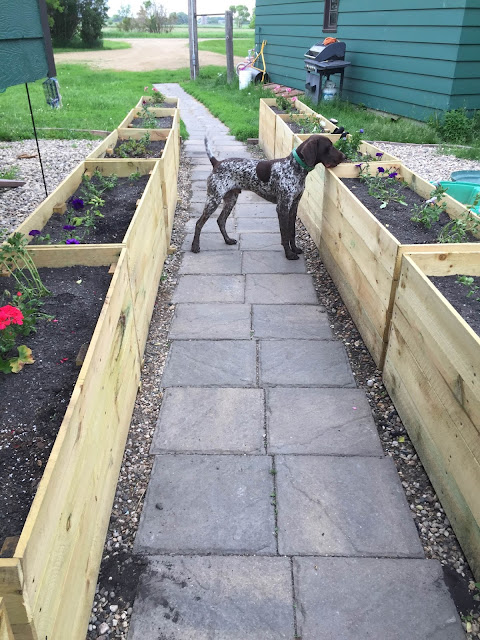 Finally I got the dogs out of my flowers. Until they start jumping up on them.

You may begin with the aid of connecting the broken components of the chain-hyperlink fence the same manner you’d patch a torn piece of fabric get quotes click this site that this time it’s a fence and the use of pliers rather than using a needle. You may determine this hack out in your very own once you have got the tools. At an occasion that the damage is large, you want might need to keep in mind the help of specialists in getting this completed.