Hello There!
I wouldn't call this a project so much as a desperate attempt to make something seem like fun to my toddler.
Our daughter is just about 3. We were waiting until things settled down with the baby before we tried the whole potty training business.

Now that we're getting closer to her third birthday, we're doing much more potty training. What are children motivated by? Chocolate and stickers. (and as you'll see below, Band-aids). Generally I can get her do what ever I need her to do by promising chocolate or stickers. I thought potty training might also be the case.

I made this chart and filled in random rewards. I didn't want to give her candy every single time she sat on the potty, but I wanted there to be some sort of reward beyond the sticker. She's been doing pretty good; although I didn't realize I would have to also convince her to stay on the potty. So that usually means a snack. So I ended up losing the "food for reward" game even after my colorful chart. 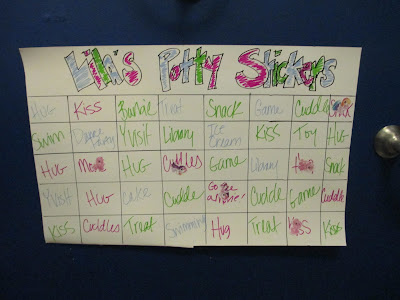 Some how, without the ability to read, the first sticker she put in the board was the most expensive "big" prize (going to see a movie). She enjoyed Monsters, Inc in 3D sans 3D glasses. I tried to convince her to wear them but she turned to me and said. ."No sunglasses. It's dark in here." I didn't even have a come back for that. She made a valid point. 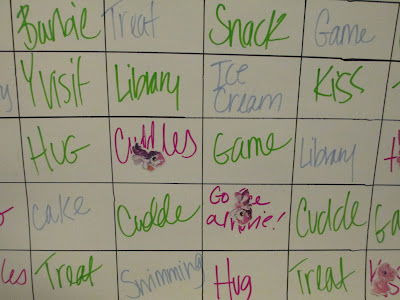 Some where down the line, she translated "stickers" to "Band-aids"...so now she wants a Band-aid every single time she goes potty. Argh. So if you see my child, she isn't being abused at home. She just has an unnatural obsession with Band-aids, Buzz Lightyear and Cinderella. 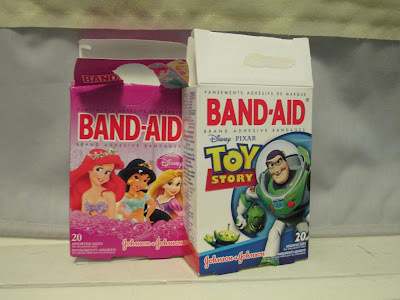