Whew! It's been a crazy couple of weeks. I went to NYC for work and was "lucky" enough to have strep before I left and a cold after. However, I wasn't sick on my trip so maybe it really was luck.

I have quite a few projects to share over the next couple of weeks. I'm also finishing up a couple of projects this week. Today I am sharing a really fun party we had for my husband's co-workers a few weeks ago.

Once we had our yard fenced it and the patio done, my husband wanted to have some people over. He thought that it would be fun to invite his co-workers from the clinic and all their dogs. I thought this idea was both terrifying and great. I could just imagine dog tug-of-war over my new patio cushions. But we are dog people and miss the dog parks in the previous towns we lived in. So, we created our own dog park for the evening.

Surprisingly everything went extremely smooth and guests of both the four and two leg variety seemed to have fun.

I didn't get too crazy with the DIY projects. I have enough party supplies now that I can go into my stash and find stuff to entertain and decorate. (Which is a nice way of saying I have hoarded too many things)

The first thing I did was whip up some invites. My husband decided it was going to be called the "big summer blow out" based off Frozen. Apparently everyone thinks my husband looks or sounds like the shop owner from Frozen. I did a Google search for coloring pages and used those images for the invite. Then I did some coloring of my own to color each invite in. (I don't have a color printer so this was my solution. And I love to color anyways) 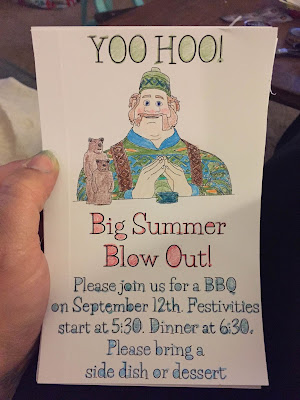 My go to decoration is a ton of cheap chalkboards. Did you know that the dollar store now has small chalkboards? I added some ribbon to the backs of them so they could hang easily. I have been a fan of chalkboards long before they blew up Pinterest, but they are popular for good reason. You can reuse them and make them unique and fun. I had several "stations" set up through out our yard with different supplies. I also put a sign up in our entry directing people to the restroom, since that has the be the number 1 question guests have in a strange house. 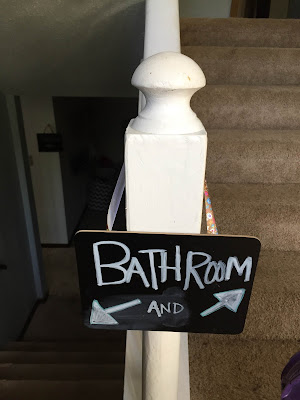 The first station was necessary on our acreage: bug  spray and sunscreen. The second was for the doggie guests. I picked up a bunch of different toys from the dollar section of our local big box store. The investment was totally worth it because we could just keep whatever wasn't used. My dogs were happy for the influx of toys. They are used to hearing "No, that's not a toy!" We also had two large water dishes set out for the dogs. 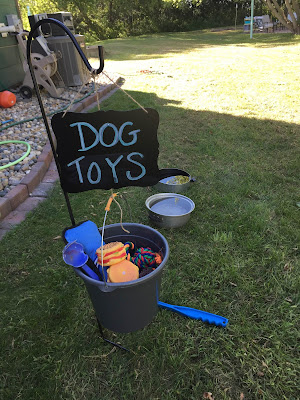 The last station was necessity for having so many dogs. I had a time out with kennels and leashes in case any dogs got unruly. We also got waste bags from the dollar store and tied them to each garbage can. 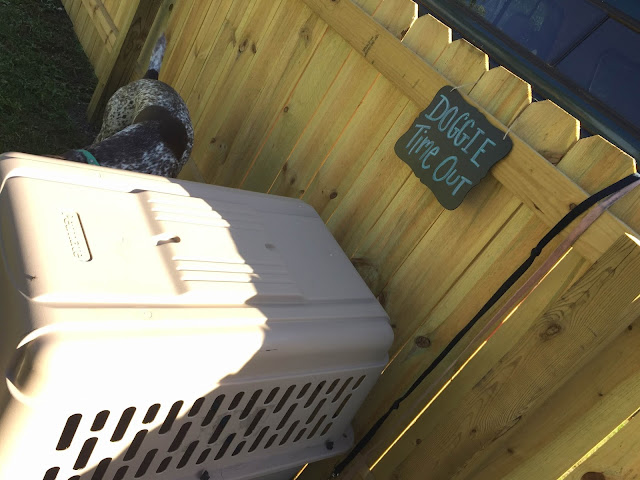 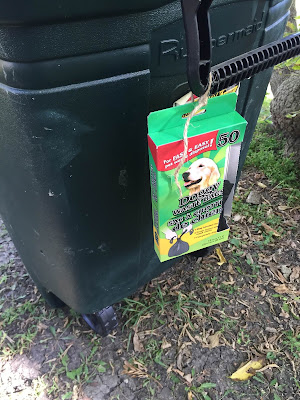 For entertainment we pulled out the lawn games we haven't had the chance to use in years (plus my new yard Yahtzee game. Click here for the DIY) 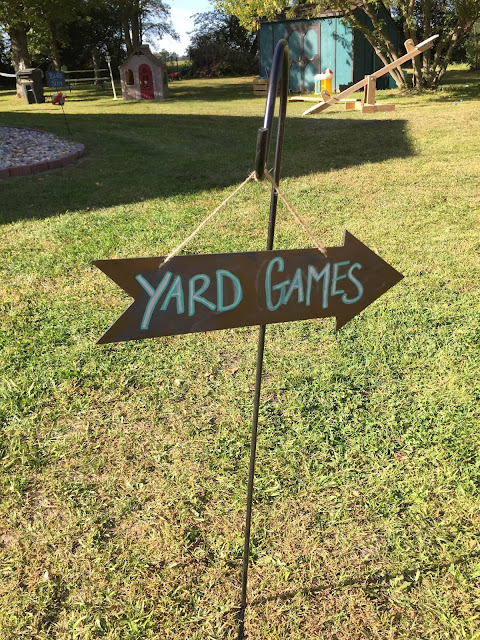 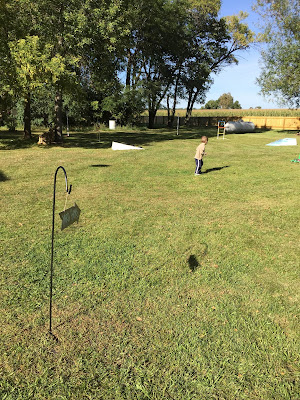 My mother in law has this wash basin that I absolutely love for drinks. I keep trying to steal it for my house, but they use it a fair bit as well. Someday I will succeed and it will be mine. ;) 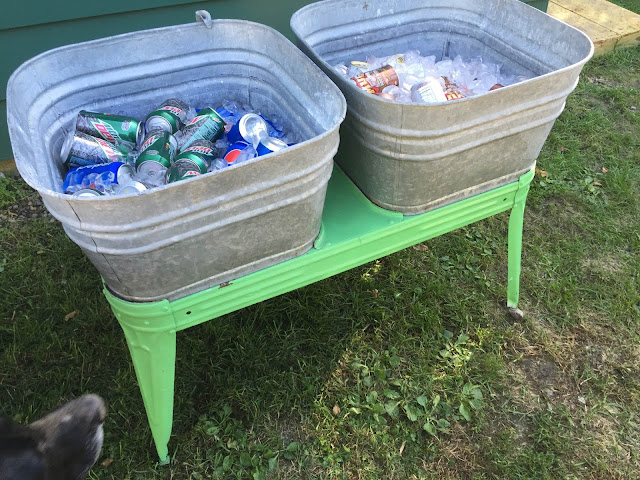 One final touch that I decided to do at the last minute was take some Christmas lights I had stored in the garage and hang them from a few trees. I loved the way they look and will plan on doing more the next time we have a party (Housewarming in 2016? When the kitchen remodel is finally done?) 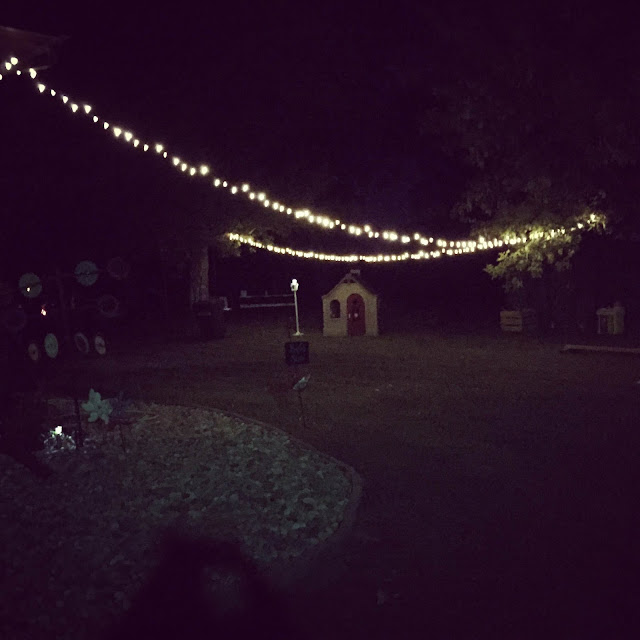 It happen to be a bit chilly that evening so I pulled out some spare blankets that morning. We cut some logs up to be side tables around the fire pit. We also had plenty of s'more supplies on hand. My daughter would have never let us have a fire without s'mores. It's inconceivable! 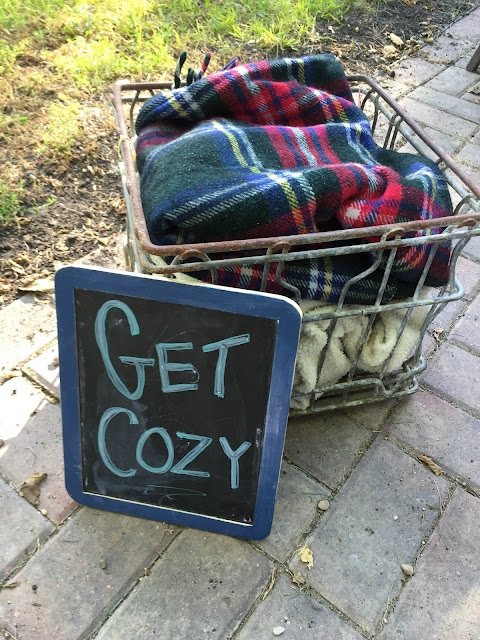 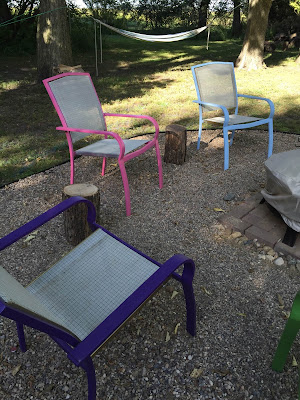