I'm happy to share a project I've been working on for about a week. When we got Myrtle, the original 1963 cushions were included and were a fashionable shade of brown and stinky. 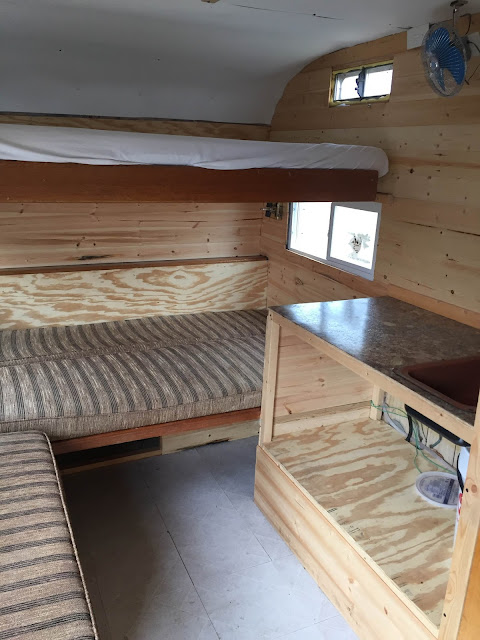 Yeah. Since I planned on sleeping on those cushions, it was time to get new ones. However, foam is not cheap. In fact, when I was planning the renovation, I assumed this was going to be one of the more expensive things we updated.


After doing some research and asking around the vintage trailer community, it was clear buying online was the cheapest way to get foam. The important thing to note about foam is you definitely get what you pay for. The foam from Joann's isn't quite up to the challenge of heavy use. It's not as firm and high density as what you would find online.

So, I got some recommendations and started getting quotes. These are the quotes for (2) Gaucho Bed/Sofa Cushions, (4) Dinette Cushions and (1) Love Seat Cushions. (I should note I also reached out to local upholsterers, but either they didn't return my calls or wouldn't sell just cushions)

For 4" thick cushions of medium quality/high density, the quote was $391.50. If I increased the thickness to 6", I was looking at $462.32 for all the cushions. The batting wrap (recommended when you make cushions in order to have a more rounded appearance) would add an additional $70.00. That $70.00 for the wrap was pretty on par with all the different retailers. Shipping wasn't free either and was estimated to add an additional $60.32 to the cost.

For 4" thick cushions of medium quality and high density, the quote was $410.80. However, shipping was free. I didn't get a quote for 6" after the first retailer, because I knew the cost would have been higher than what I was willing to pay.

For 4" thick cushions (Lux/High Density), the quote was $379.18. Shipping was also free with Foam Factory.

I decided to at least take a look at how much the foam would have cost even if it wasn't as high quality as the above retailers. The high density foam would have been around $439.98.

This is a favorite retailer of vintage trailer owners when it comes to awning materials and fabric. I decided I'd at least price them out for cushions. The cost for all the cushions was around $444.80.

I thought about ordering from Foam Factory since they were the cheapest and by far the most recommended company throughout the owners groups I'm apart of. However, the more I thought about it, I got a different idea. I wasn't sure if it was crazy, but if it worked out, I could save a bunch of money.

Enter Walmart.com. Wal-Mart now sells mattresses including foam versions. The mattresses vary in depth, but for the most part they were 6" or deeper. Really...how much difference could there be between the fancy foam and these mattresses? 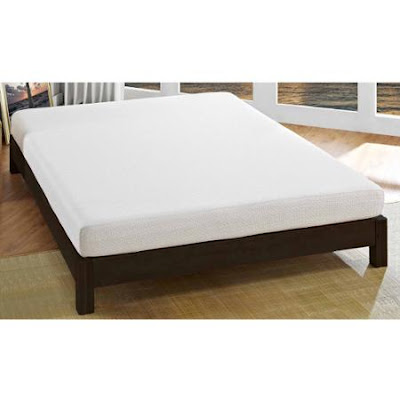 So I sat down with a pencil and paper and started figuring my cushions into standard mattress sizes. It was a bit of a jigsaw puzzle to see what size mattresses would optimize the amount of foam used. I figured out that if I got a full size mattress I could get cuts for the couch and love seat. If I got a Twin XL, I would have exactly enough foam for the dinette set.

When I sat down and price everything out, I could get those two mattresses with free shipping for $288.00. So if you compare that to the cheapest quote I got for 4" thick foam, I was still saving about a $100.00. If you compare it to the 6" quote, I was saving almost $200.00. That was some pretty impressive savings. I bought two rolls of quilting batting to wrap each cushions for less than $30.00. My final expense was a new electric meat carving knife for $10.00 (I could have bought a used one but I was already at the store and the price was right)

So, if I would have gotten 6" foam with the wrap plus shipping from Foam Order, I would have spent just shy of $600.00. Using a foam mattress from Wal-Mart, I only spent $328.00. That's about half price from online retailers. Sweet! (Side note: I also purchased a 4" mattress memory foam topper from Wal-Mart for $60.00 and cut that down to size for the bunk. The kids will be on the bunk so I wasn't overly worried about it being extremely plush...it is camping after all!)

Cutting the foam was extremely easy. I removed the fabric cover, marked the cuts using a marker and straight edge, and cut along the line with my meat carver. 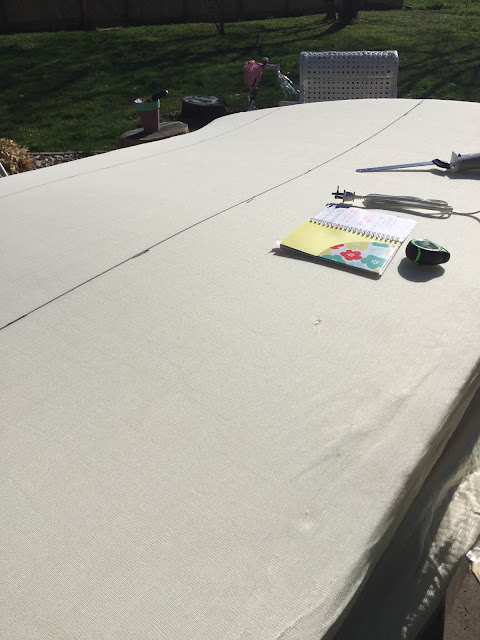 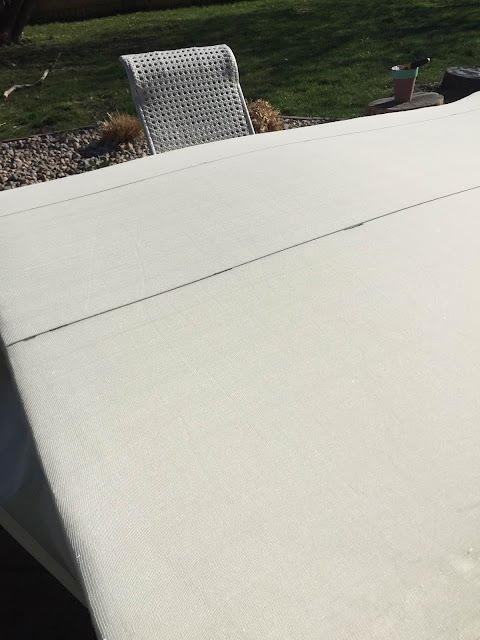 
As for fabric, it took me forever to decide what I wanted to do. After watching a tutorial on using vinyl fabric and piping over foam and plywood, I decided that was the method I was going to try. By just sewing a top and extra long sides, I was able to save money on bottom side fabric and avoid zippers completely.

I bought my white vinyl from Fabric.com. I've been really happy with my purchases from their website except two things: 1) Shipping takes longer than other retailers, and 2) My vinyl came with a tiny rip that went through three layers of the fabric. Otherwise, it was only around $5.00 per yard which is extremely affordable for upholstering.

As for the piping, I couldn't find ready made piping in the right color. I was pretty intimated to make my own. I had never (ever) used piping. And this was quite the large first project to try it out. I found this tutorial on Make It, Love It. Then, I found this awesome tutorial on how to cut continuously on the bias on the same website. Those two tutorials are essential when making your own piping. I had to make over 24 yards of piping for all the cushions. That's a TON of cutting on the bias. If it wasn't for the continuous cutting tutorial, I would have been doing it forever. 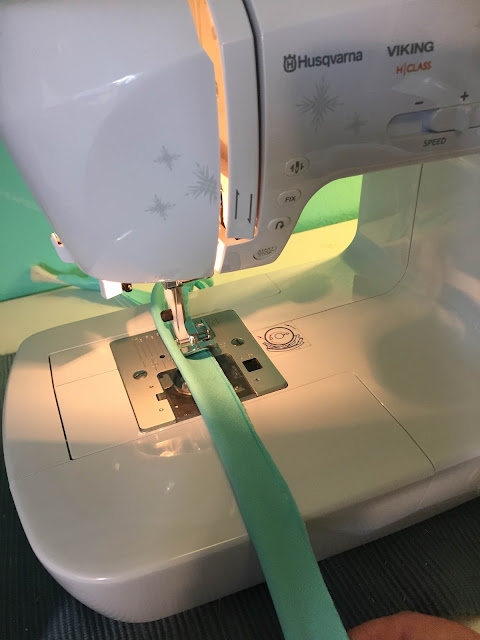 The cushions were a pain to make just because the fabric was heavy and large, but it wasn't very difficult. I cut everything first. I made all the piping next. Finally I went cushion by cushion to attach the piping and then attached the side fabric. When I was done, I had a top and over sized sides. 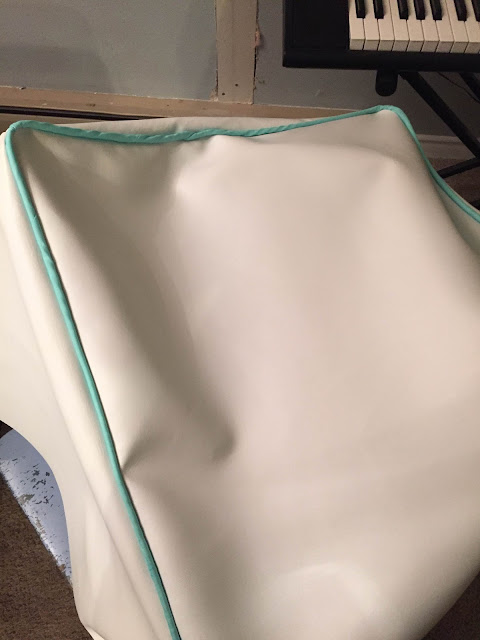 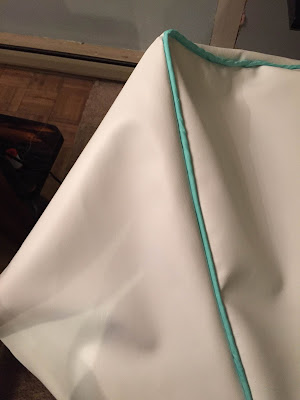 
The final step was putting everything together. This was pretty darn easy because all the major work was already done.

First, I wrapped each piece of foam in the batting. I had some spray basting adhesive that I use with my Silhouette cutting machine. That was just enough stick so the batting wouldn't slip around even during a [very] windy day. 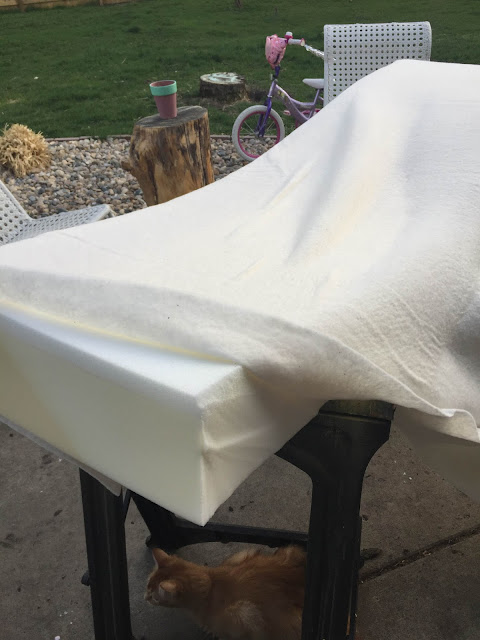 Once the foam was wrapped, I slipped the cover over the top of the foam. Next, I flipped the foam over, and then placed the plywood in the center of the foam. 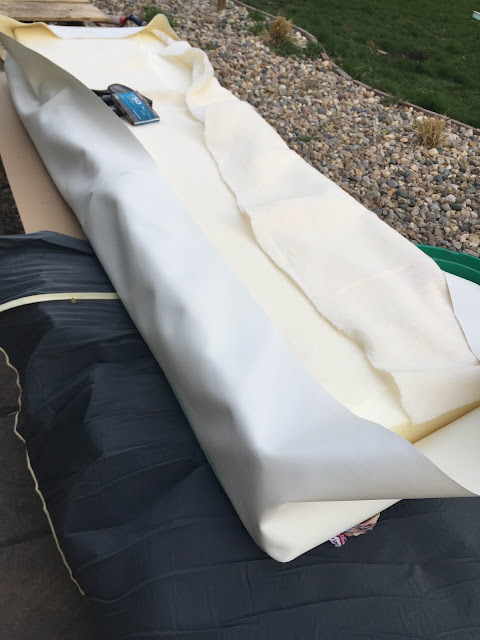 I cut all the plywood (it's a very thin plywood) 2 inches shorter than the sides of the foam so the hard side of the plywood wouldn't stick out.

It's not perfect. My piping got a little wonky as I was pulling it to staple, but it's a really great look for spending less than $400.00 on seven cushions and covers. 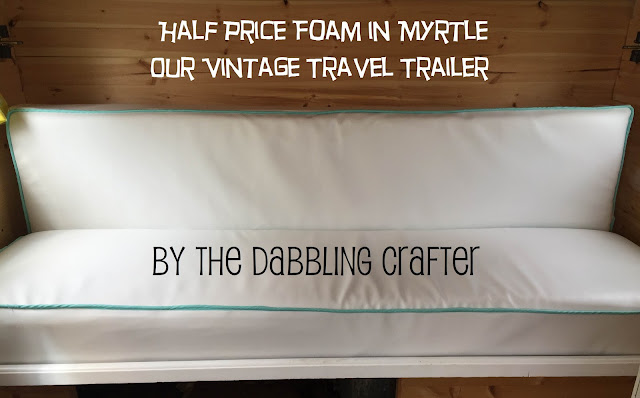 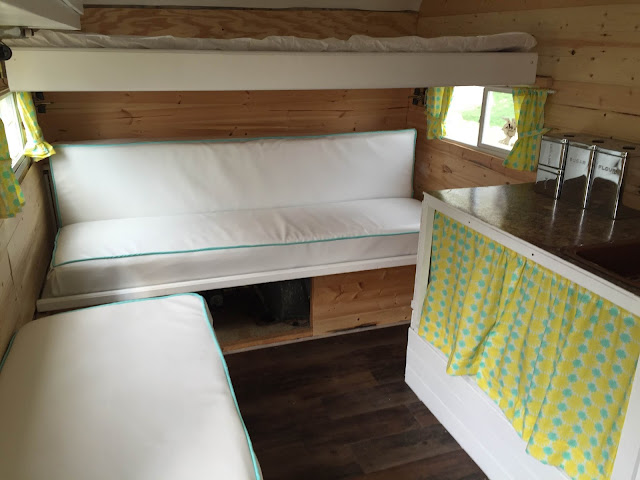 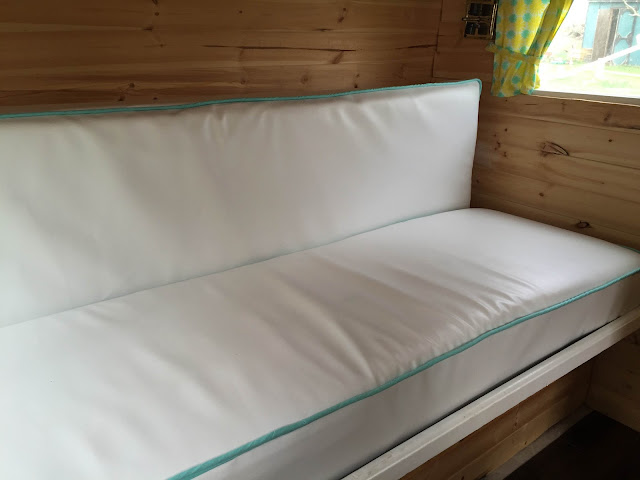 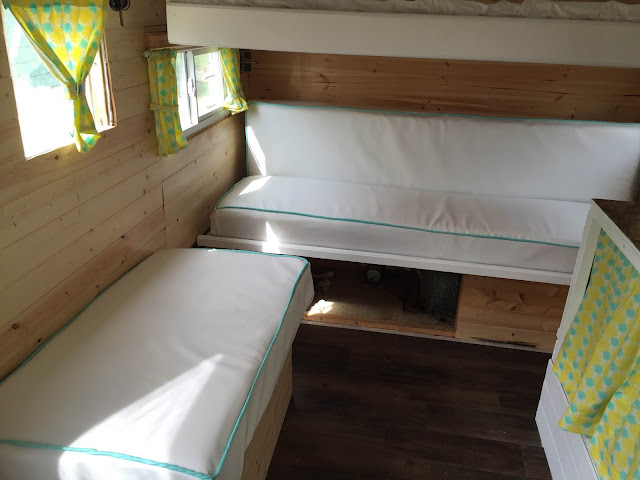 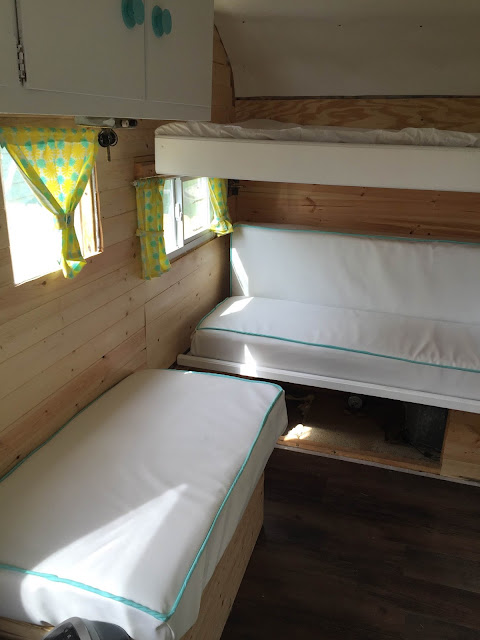 I have to be honest...I have been staring at one little cushion from my trailer for months!!! I am scared to try the piping & order the foam! But now after seeing your great results on your first upholstery job, I am finally getting the courage! Thank you for blogging the details!! I owe you a big hug! Many fun times ahead for your family in Myrtle! Cathy