We had a very exciting week at Ugly House. The sci-fi wall we've been trying to remove for almost 2 years finally came down! When you watch those home improvement shows, it seems like you just decide to remove the wall, call someone and ta da! After the commercial break, there's no wall and you're ready to start staging your new open space.

In the real world, you have five or so contractors come out to look at the wall, have all them agree that we need a support beam and wait for one of them to call you back.

This is how the wall looked when we moved into the house: 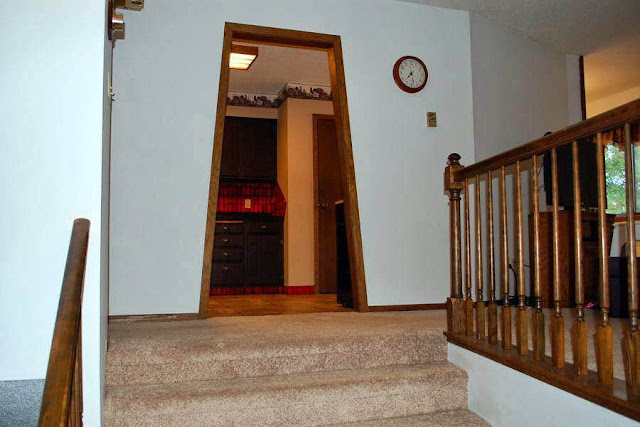 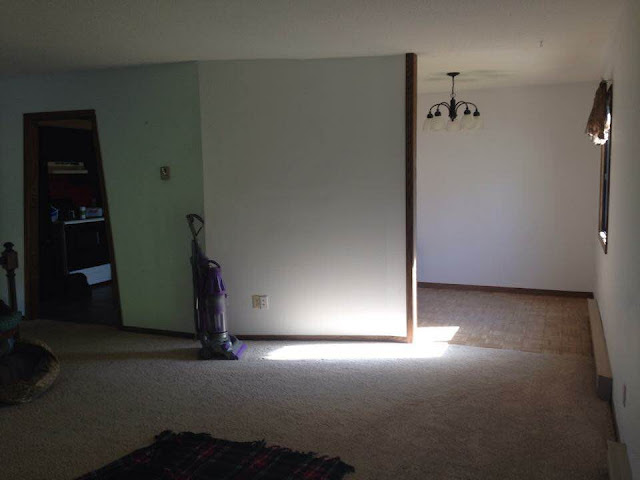 One of our neighbors went out on his own and started a construction company. We had briefly spoken with him about hiring his company, but he was finishing up his own home, having a baby, and we got distracted with our many outdoor projects. After I started feeling better in my pregnancy, we refocused and came back to the Indiana Jones and The Lost Tomb wall.

We messaged our neighbor, he came and took a look, got a quote and bam, we were on his schedule. I was very excited at this point to even have a rough date the wall would come down.

We said we would take care of removing sheet rock, and man, that was a dirty job. However, the kids thought it was pretty darn amazing. They started to ask if they could take down other walls in the house. There was a very long discussion about not taking a hammer to the rest of the house. 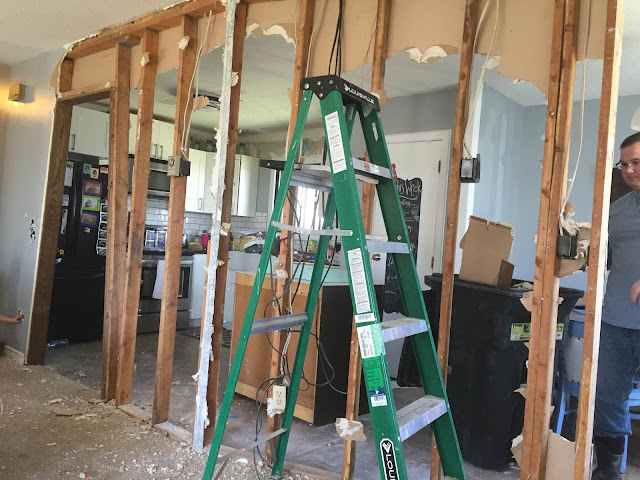 That's my son mopping...take a mental picture, because it may never happen again. 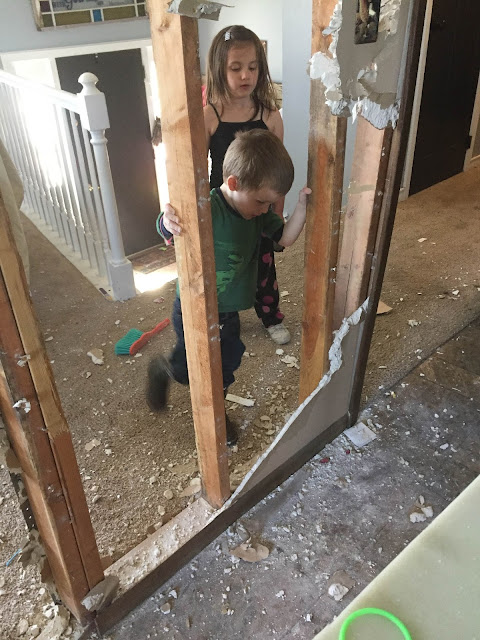 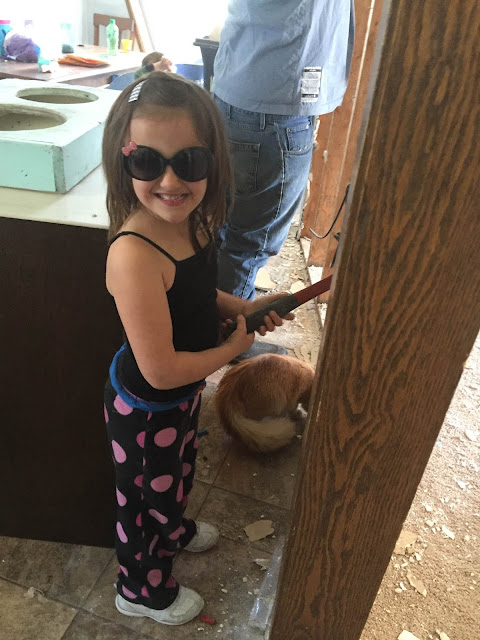 After we had the sheet rock down, we got a bit more excited because we could start to see what the space might look like. The air flow increased by about a 100%, the living room wasn't a dark dungeon, and I realized I might actually be able to keep my larger dining room table without having to toss children to the opposite side or have them crawl underneath.

When the big day came, I was pretty excited. We moved all our furniture (no easy feat when you're 21 weeks pregnant) and prepped the space by taping out the island location and new light locations. 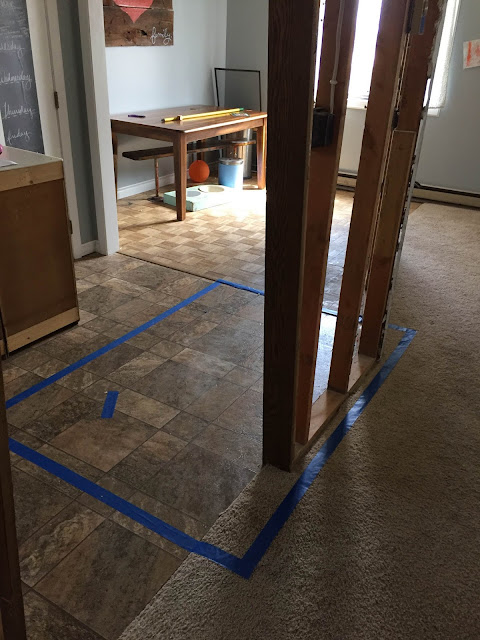 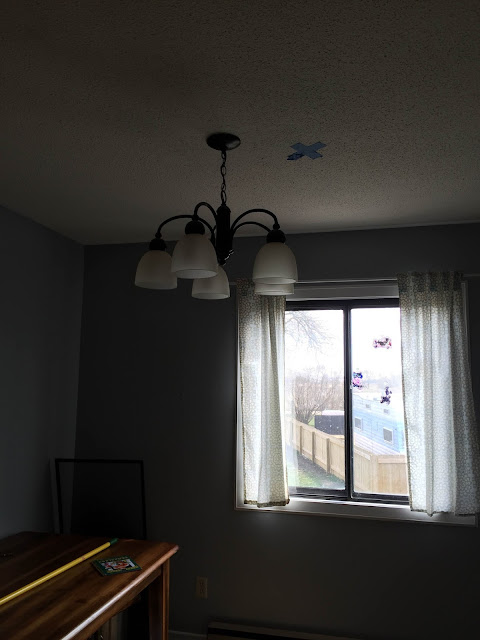 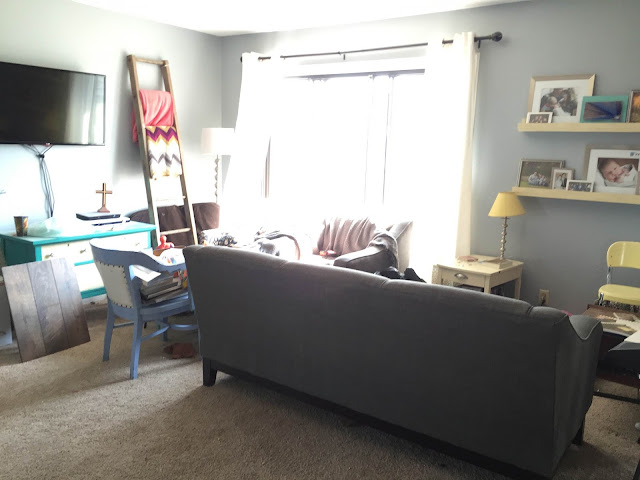 Charles and his team arrived nice and early in the morning and started their work. The first task was putting up the temporary wall. I was shocked by how fast that process went. They were practically done before I was out the door with my coffee. After they got the temporary wall up, they went to town removing the studs. One of his workers commented that the studs were in there really (really) securely. That process took several hours. Then it was time for a break while we waited for the beam to be delivered. 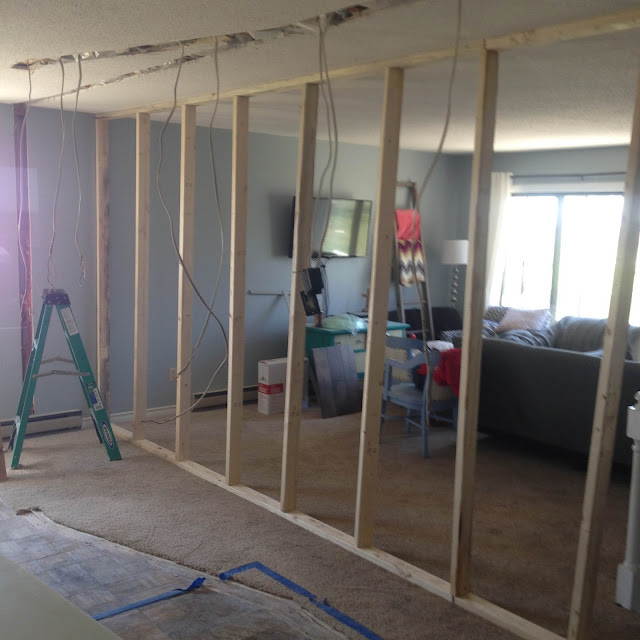 At this point I snuck back inside to take a look at the progress. First of all, the CWB team was insanely good at keeping the space clean. In fact, I'm pretty sure the room looked more clean after the work than before. (Yes...I have sad housekeeping skills) Second, Charles was great with keeping me updated where they were in the process and what came next. I work from home so I took up residence in Myrtle for the day. His workers were very polite and quick with their work. Did I mention the cleaning? Seriously.

Once the beam arrived, the team went back to work and had everything up and cleaned before the end of the work day. I think I accomplished two contracts, and they removed an entire wall in that day. Makes my two contracts look pitiful in comparison. I spent the evening reveling in the fact I actually had a dining room. I should have been excited about the island and the fact it was doubling my counter space and cabinet space, but look at that dining room! 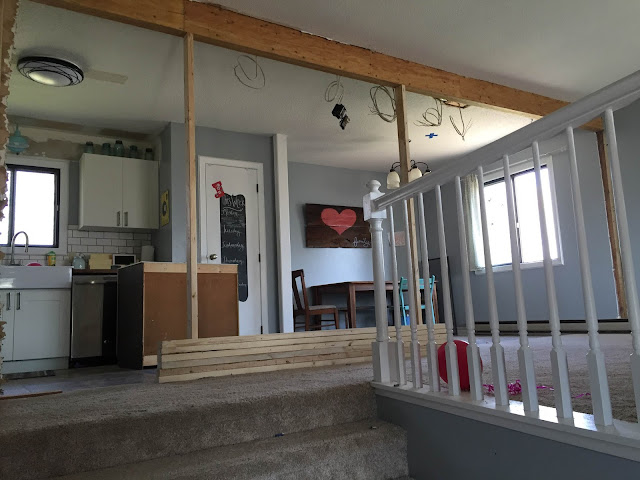 How our dining room table used to sit.... 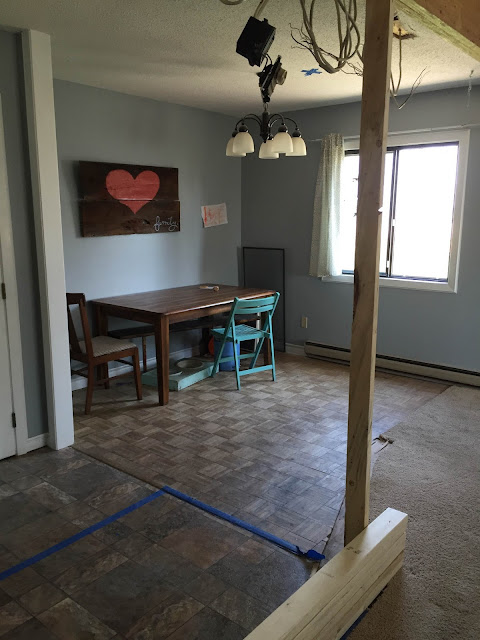 How we can now have it sit. Yay! 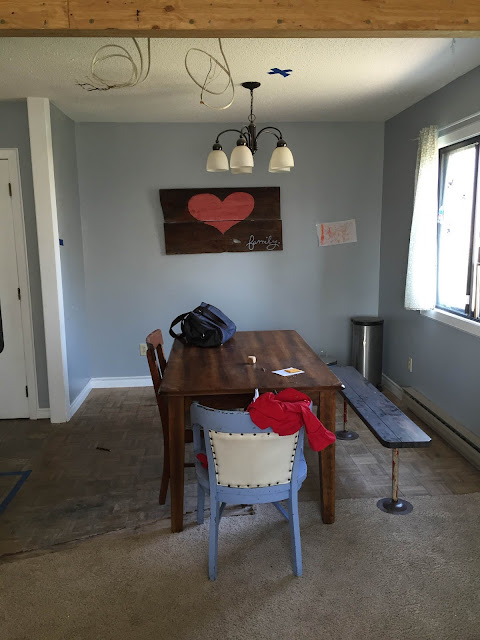 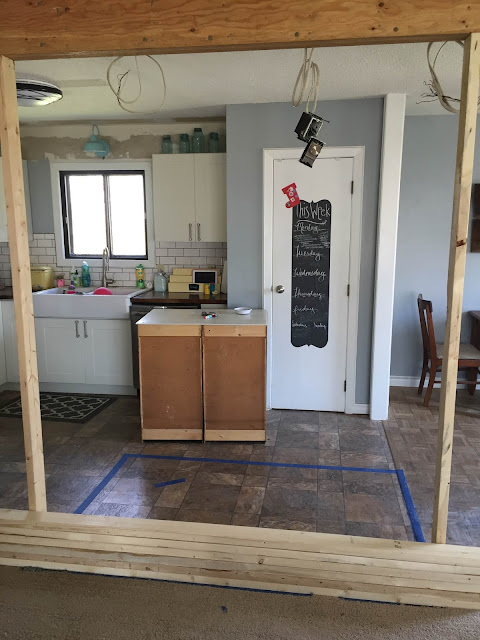 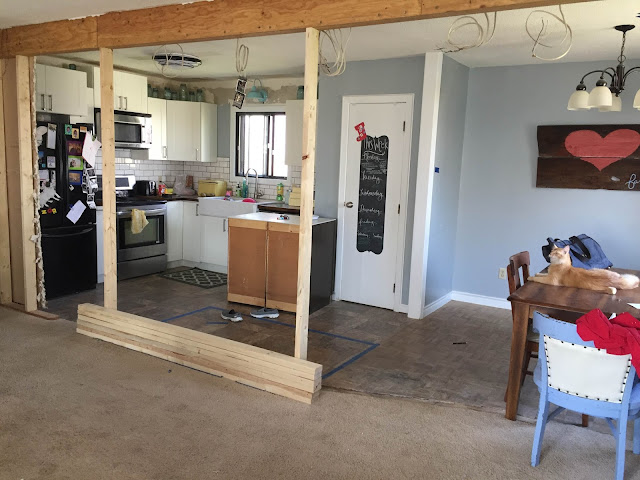 The next day the electrician from Muth Electric came out and roughed in all the lights and outlets that had to move and put in my three new lights. The electrician was extremely professional and kind. Ironic enough his wife is having a baby and their ultrasound was that day. We practically had the same due date. He worked quickly, efficiently and to say I was excited to have my new lights in would be an understatement. I picked up a simple dining room light from Lowe's, and the week before work started, I picked up these super cheap pendant lights ($20.00). I gave the shades a quick coat of spray paint and voila, they were just like the Barn Light Electric lights but 1/10th the cost. 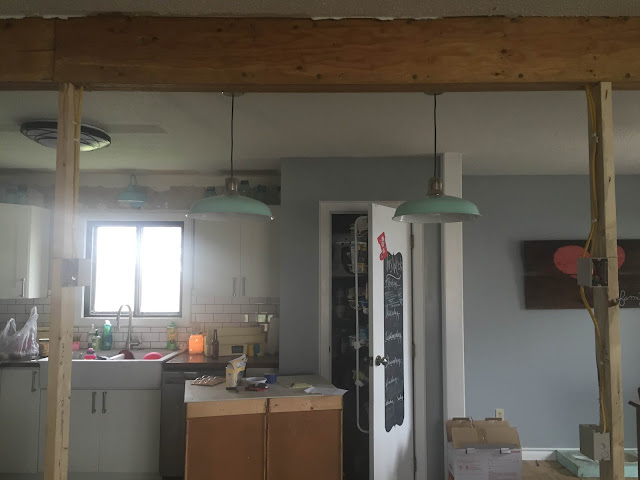 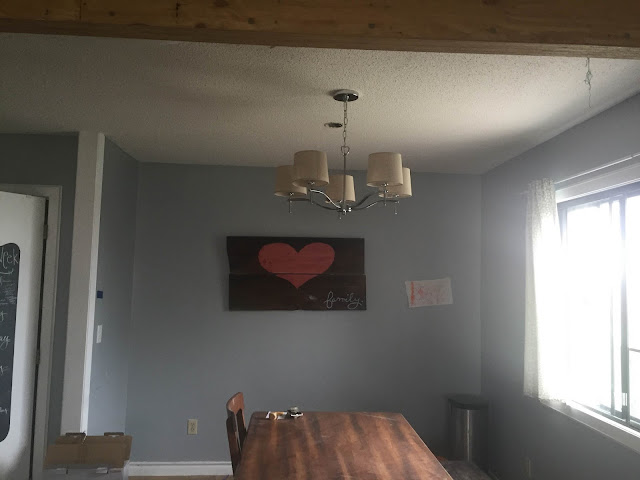 Over-all, I would have to say the process was fantastic. Two days and the wall was gone. If you're in the Brookings area, I would highly recommend CWB Construction. I started to think about all the next projects I could have them do, but then I remembered I still have to build an island, plank an entire ceiling, put new floors in...oh and have a baby somewhere in there. I probably should just keep going with kitchen/living room and baby thing.

Here's a sneak peek of how the island building is going. I'm in love with it already. :) My husband is just happy to reclaim half his garage after two years of storage. 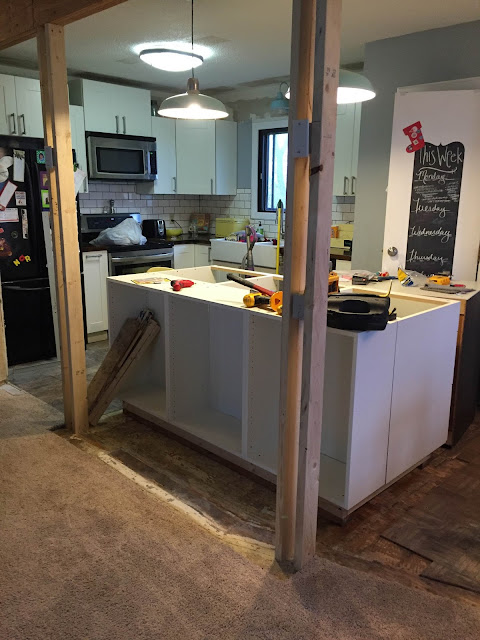