I'm excited to share this massive project we have completed in Ugly House. It was quite a bit of trial and error, so I'm hoping sharing our process will help anyone who is thinking of tackling this project. With all the going back and forth and refining the process, I finished painting and caulking the ceiling about 1 month after we started the project. So, this project isn't for the faint of heart if you're going to tackle a large surface area, but the impact is pretty incredible. 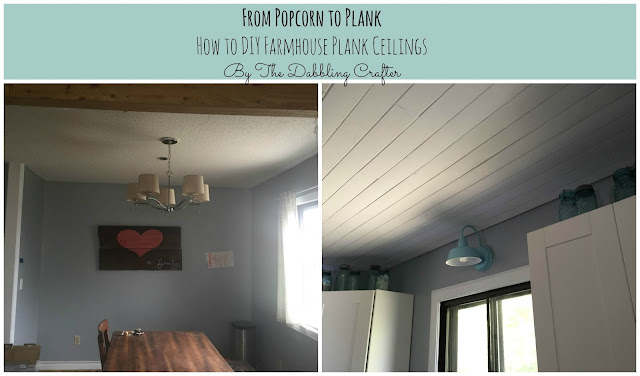 
Plank Pine Boards (We used ultra thin pine plank boards that were about 8 feet long, available at Lowes. They were the EverTrue brand just like this one but pine.)
Ceiling Paint (We used Olympic One ceiling paint and primer in one.)
Nail gun & Compressor
Caulk & Caulk Gun
Wood Filler
Stud Finder
Saw (We used our compound miter saw and a jig saw for cuts around light fixtures.)
Ladder (We found a step stool with a wide platform was more comfortable than a ladder.)
Optional: Paint Sprayer

Cost of this project for approximately 600 square feet was around $500.00 dollars.

The first step will be to decide how you want to finish the boards. You'll want to decide that before you start putting anything on the ceiling, because it's infinitely easier to deal with painting planks on a couple of saw horses than on the ceiling.

We did a couple of boards with a white wash effect (just a thin layer of primer on top). 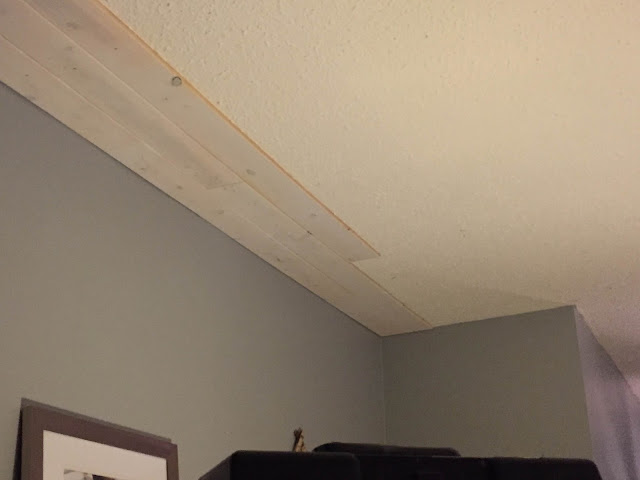 I decided I didn't like the white wash look as much as a crisp white, so we went back to painting the boards. Since I knew I would be painting a LOT of boards, I bought a paint sprayer for the job. I went with this Wagner paint sprayer. For the most part it worked really well for the job. I didn't have to thin the paint to get it to go through the paint sprayer. So long as I kept working steadily, it didn't clog up. Cleaning up has been easy even if I let it set for too long because everything is plastic so the paint peels right off. Just like most paint sprayers, there will be a ton of over spray so I would definitely cover anything you don't want paint on. I gave each plank two coats of paint.

Before you start putting any boards up, you will want to use a stud finder to find the location of the ceiling joists so you can nail the plank into something more solid that drywall. I've seen a couple of ways people mark this out. You could find the joists and make a chalk line across the entire ceiling. We decided to just mark the joist locations for the first row and then keep nailing in a straight line from those first nail holes. It did mean that we would have to put some extra nails in if we got a bit off kilter, but for the most part it worked just fine.

This is where I should remark since we were going perpendicular to the ceiling joists, we got away with just nailing into the ceiling. If you wanted your planks to go parallel to the joists, you would need to take a moment to put in firing strips across the entire ceiling so you would have something solid to nail into. I also saw some paranoid people using liquid nails on top of the nailing into the joists. Since our ceilings were popcorn, we figured that step would be useless (it would just stick to the texture which already was falling apart). Since the boards snap into one another, we didn't have any issues with boards sagging even if an end wasn't at a joist.

FYI: Some of the popcorn ceilings are made with asbestos, so make sure you do your homework first. Thankfully our house was built after the time of asbestos so it wasn't something we had to be concerned with.

Our method to get a staggered look is much like the one you use when you're doing a floor. You start with a full piece of plank. You work your way down the row and cut the last piece to size. Using the remnant of the cut piece, you start the next row. That way your seams don't match up and you get a nice staggered look. I do not recommend my husband's handy platform as a good way to reach vaulted ceilings. It's a sure fire way to give your pregnant wife a case of terrible heartburn. 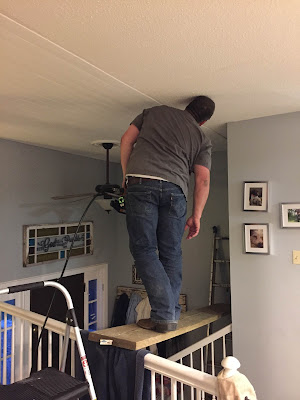 FYI: Put the planks on the wall in such a way that you're putting the male end into the female end. It's much easier to get the planks to snap into place. 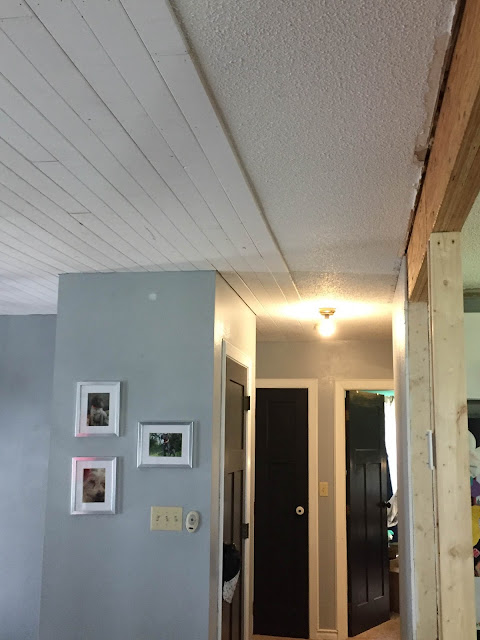 FYI: Keep an eye out around light fixtures and do your research. You will need to remove the light (or at least loosen it in such a way to slip planks underneath). You may need to buy a box extender if you extend the ceiling downwards too far. We were okay without the extenders because the planks were so thin, but if you use anything much thicker, you would need to extend the box to be up to most code ordinances.

FYI: Make sure you have nails in your gun or you will get a bunch of extra holes to fill in. Case in point: 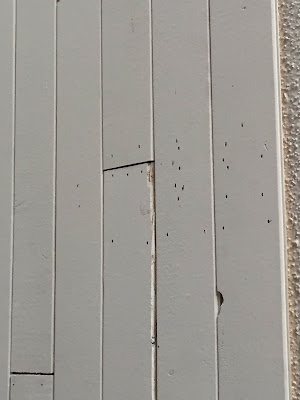 As my husband was hanging planks, I would come behind him and use a bit of white wood filler in each hole. Now, I could have used caulk as part of the caulking step below, but I find that for small holes wood filler is much easier to sand out and look natural than caulk. After the filler had time to dry (look on the package to see approximate drying times), I would go back through and sand out any excess filler. It looks rather scary before you start sanding off the excess filler: 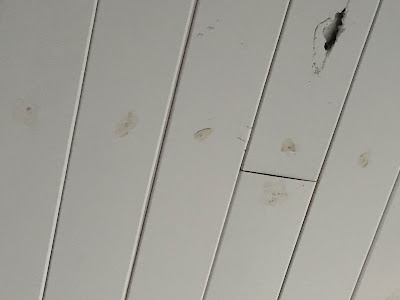 So, I thought I would just do a final coat of paint and be done after the wood filler. Nope. I tried putting a final coat of paint on and it was clear that grooves were darker and looked unfinished. Plus, we decided not to be overly picky and not use knotted pine boards, so there were some big holes that were dark on the white crisp wall. 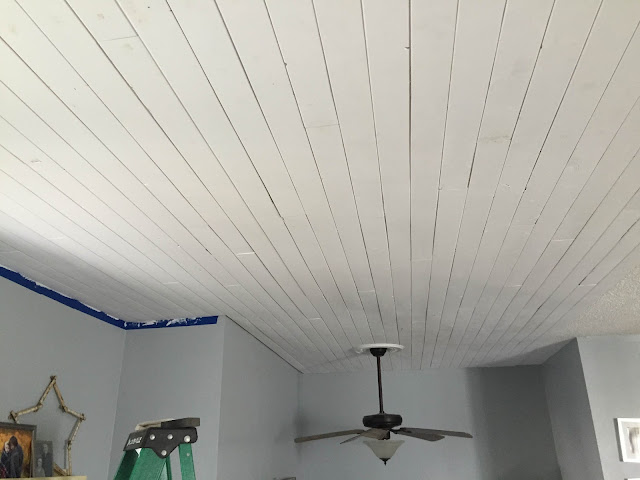 See what I mean? It was clear after painting a portion of the wood filled ceiling, I was going to have to go over every single groove with a line of caulk. I almost cried because I knew that part of the process was going to take forever. However, it completely changed the look of the ceiling. Caulk does that. It makes a DIY job look about a 100 times better, so it was worth the extra effort.

I decided that with the height of my step stool, my arm length (which is minuscule), and dry time, I could do about seven planks at a time. So I just started in one corner of the room, did the seven planks in front of me, and then moved my ladder down the line until I reached the next wall. Applying caulk is fairly easy. I would cut a small angled slit in the end of the caulk tube, put a bead of caulk in the groove (working towards me, not away from me), and then smooth the bead with a damp finger. I would wipe the entire board with a damp cloth to get the excess caulk and then go back over the groove one more time with a damp finger to make sure everything was smooth. I would fill in any other imperfections in the plank with caulk as I went along.

Since I had filled in holes and caulked the boards, one final clean coat of paint was necessary. Covering all the furniture with drop cloths, I did a quick final coat with a roller and extended handle. Don't be surprised if you're boards look dirty before the final paint coat. Chances are you're going to get sweaty and dirty putting them up and make them look terrible in the process. As you can see, my husband had no shortage of dirt when he put them up. 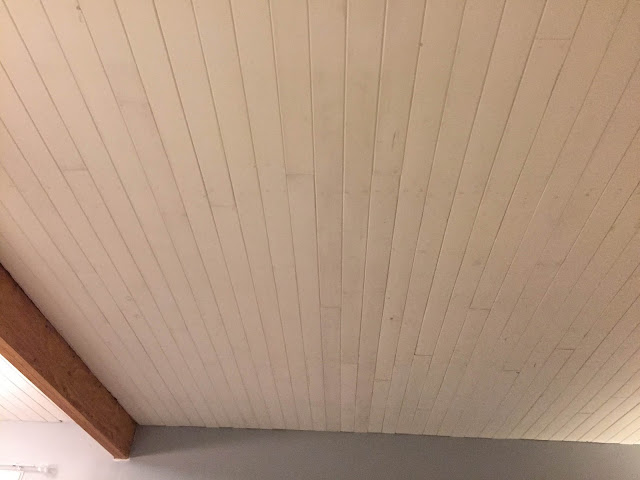 The final step to this entire process is to hang trim around the edges of the ceiling. We haven't completed this step because we're deciding between a simple 1x4 as a trim or a clean line crown molding. However, compared to the headache of the rest of the ceiling, that part of the process will be simple. 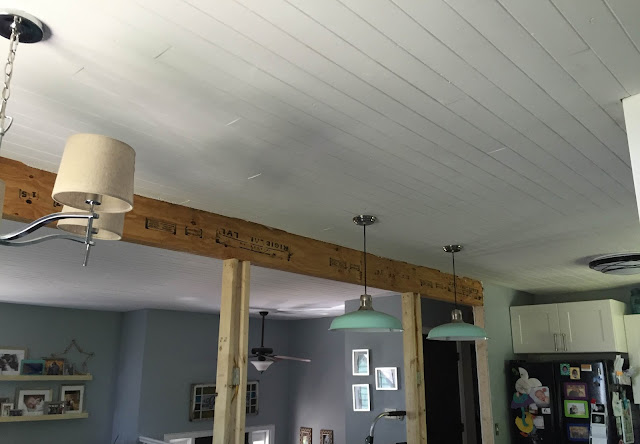 One step closer to wrapping the support beams so they look pretty! 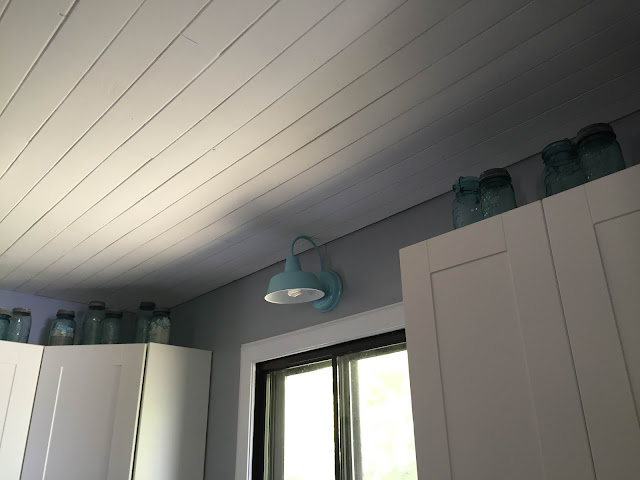 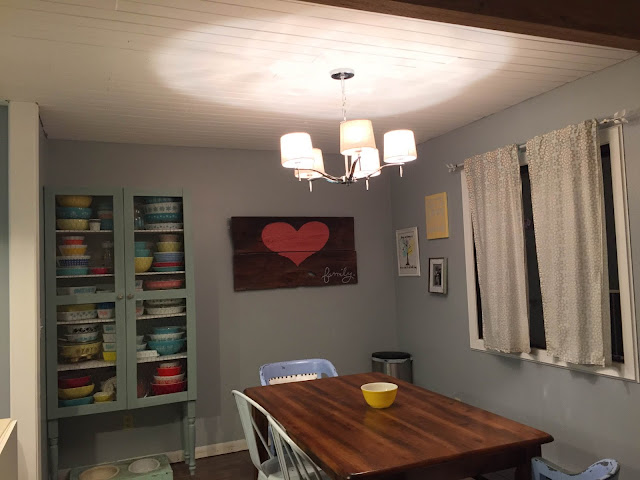 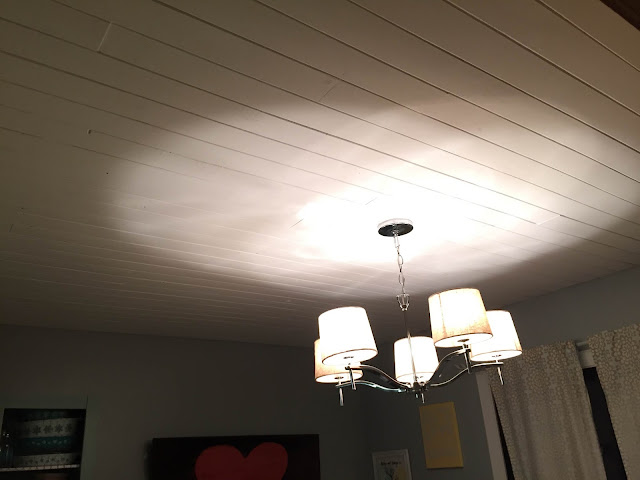 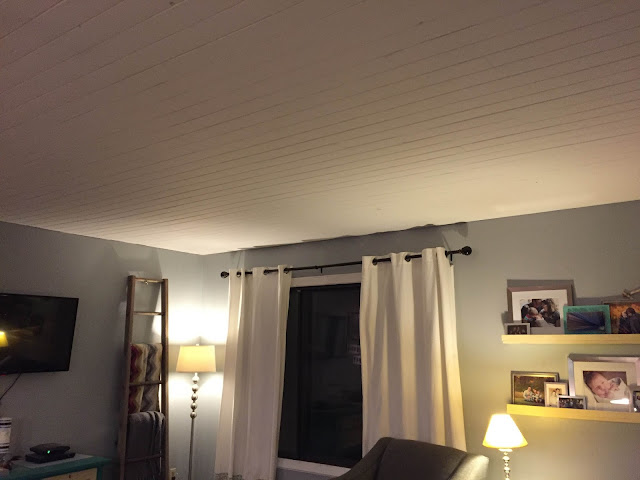