A couple of weeks ago I saw a sponsored post on Facebook that featured a scratch off map of the United States. As you visit a state, you scratch off the state to reveal a pretty watercolor underneath.

I was about to purchase one when I thought to myself, "I think I can make this with what I already have in my house." I watched some videos, read some blogs, and I decided to give it a try.

I tried a couple different methods I found online so I could give the best recommendation and directions. I would first recommend a quick reading through the directions, because I do give many alternatives to listed materials. So even if you don't think you have or can find the supplies listed, you might have an alternative option available.

Using a simple map image, fonts I've downloaded, and Photoshop Elements, I created a mock up of what I wanted my map to look like. I hand lettered the state names, but you could easily add that to your mock up as well. 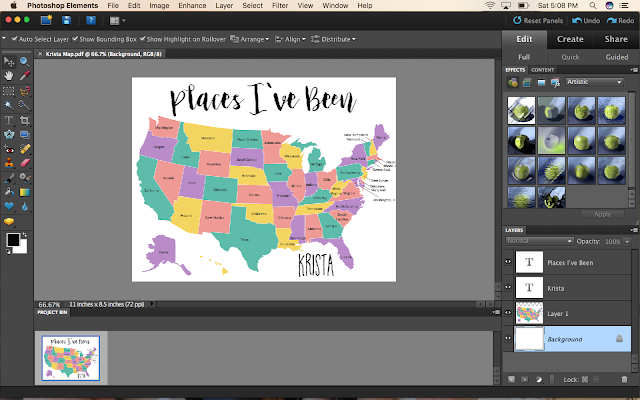 However, there are alternatives if you don't have these resources available to you. Instead of Photoshop Elements, you could easily use Microsoft Word or Paint to create your mock up. If you don't have a computer, you could free hand draw the map right on the card stock.

If you wanted to make a larger version of the map, you could also use these programs and print on several sheets and tape together. Instead of card stock, you could use foam board or poster board.

Now, I thought about just printing my mock up right on to the card stock and moving on to the next step. However, the more I thought about it, I thought it was likely the watercolor would cause the printer ink to bleed. Really, graphite (i.e. pencil) would be a better option. If I wanted to get really crazy, I suppose I could have hooked up my Silhouette to draw the image with a pencil.

What I did was grab some carbon transfer paper and sandwich it between a printed version of the document (on regular printer paper) and the card stock. I kept everything in place using a clipboard (but you could easily just tape everything down to the table or desk). I just traced the image with a ball point pen, and it transferred the image over. If you don't have carbon paper (it's inexpensive, reuseable, and available at craft stores), you could also try using your laptop as a light box, pushing hard enough to make an indent in the card stock or even just trying to print straight on the card stock. 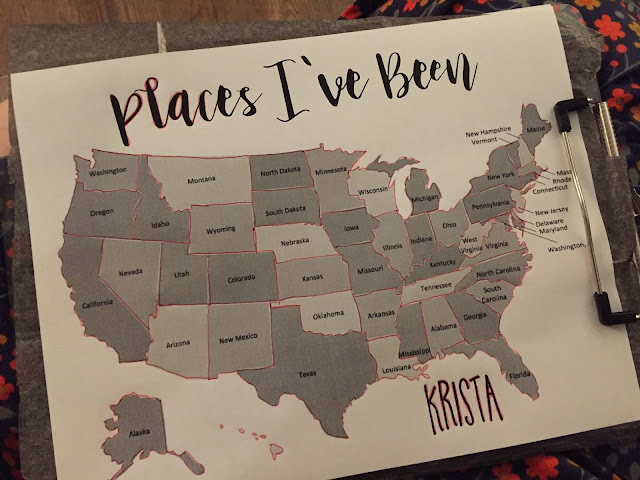 I'm no artist, but blending two colors is something I can do. I did each state separately. To blend the colors, I would start on one end of the state so the color was bright and then lightly move towards the center. I would then clean my brush in some water and blend the other color from the opposite side towards the center. Sometimes the colors would mix on their own beautifully. Other times I had to add a bit of water or dab up excess water with a paper towel. I worked around the entire map until each state was painted. 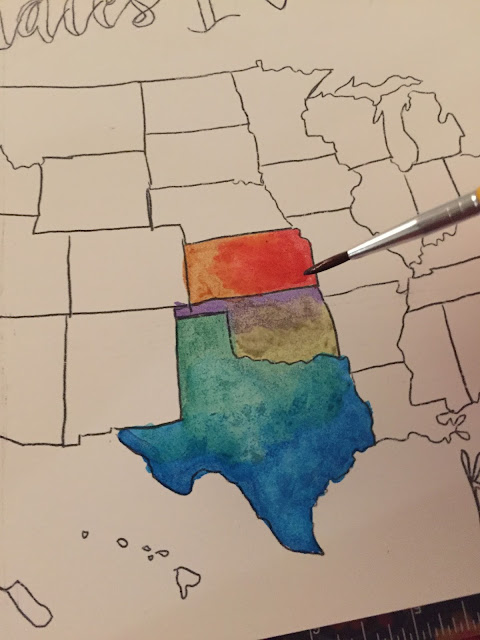 After the map was all painted, I waited for it to dry. If you happen to have a mistake (I had a couple), you can clean it up with some White Out or even try to wipe it away with a clean damp paper towel. Since the card stock is heavier, the watercolors shouldn't bleed through or distort the paper. Once the paper is dry, you can color in the lettering with a Sharpie. I also took the Sharpie marker and traced the outline of all the states. I then added the names of each state with a Sharpie. 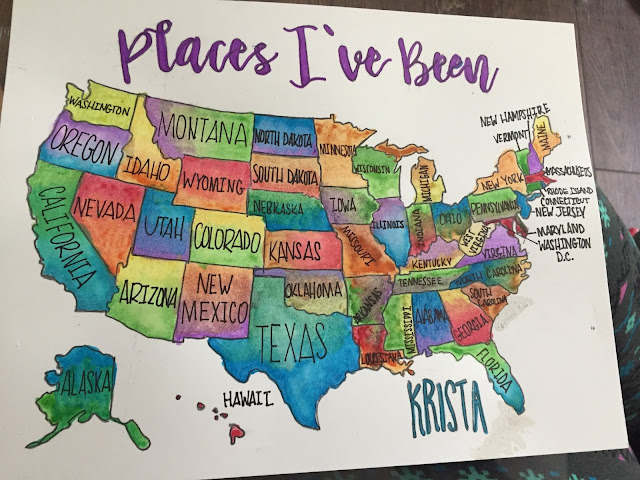 So this is where I did some experimentation. I found many tutorials online that suggested using acrylic paint in a 3 to 1 ratio with dish soap. So, I thought I would try that out with some paint I had sitting around. 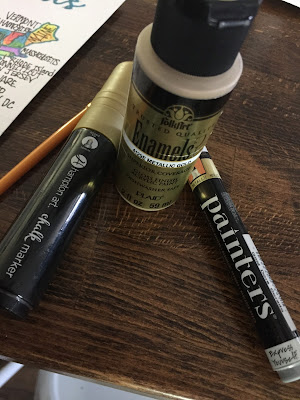 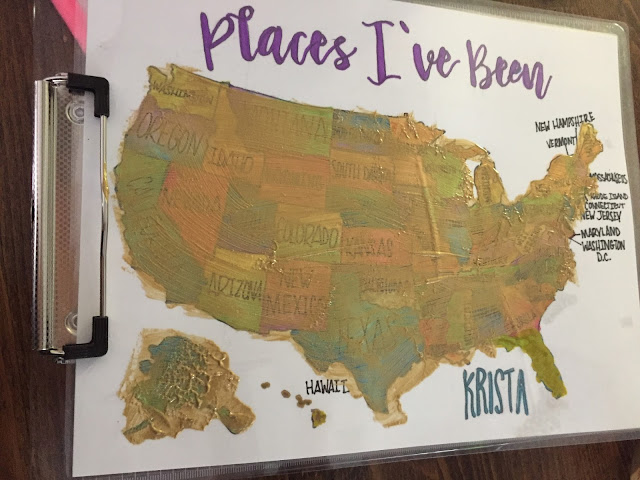 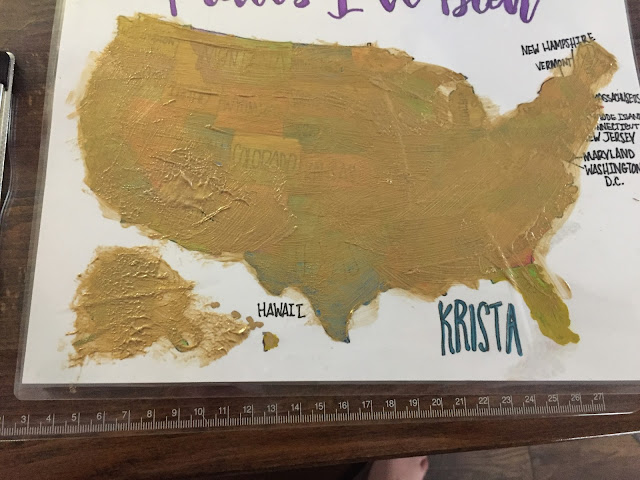 I wasn't overly impressed with the result. The paint wasn't smooth. Perhaps I was just too impatient and the paint wasn't quite dry yet or maybe I had the wrong type of paint, but it didn't scratch off so much as rolled off in big sticky bunches.  The left behind paint was a wreck as well. I tried a paint pen, but it didn't have that soap addition so it didn't work well either. 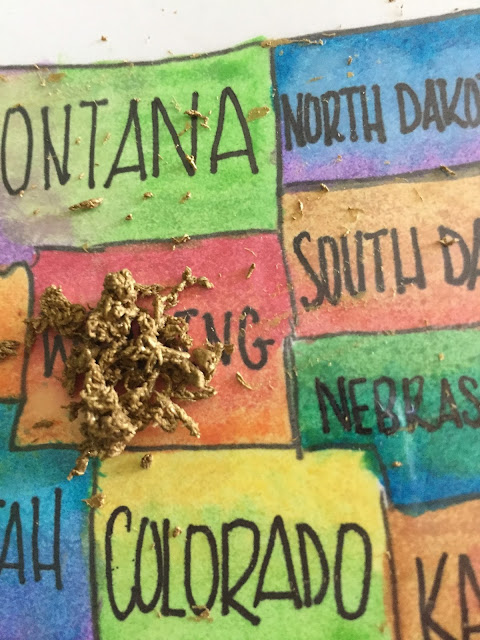 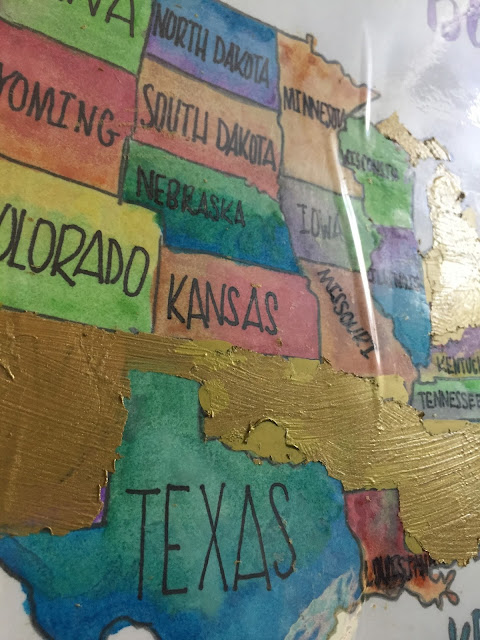 However, the paint option did allow me to put on multiple layers.  With each layer, the top layer got less and less opaque. I decided not to get too caught up in staying within the lines since 1) it was a pain and, 2) it was fairly easy to scratch off where I went outside the lines.

I found a blog that suggested using a chalk marker as the top layer, so I tried that as well. The chalk marker worked fantastic. It's not as solid as the paint and it scratches off easily enough that you can't add a second layer. However, I actually liked that it wasn't as solid so you could see where the states were underneath. I also liked that if I made a mistake and scratched off something I didn't mean to, I could easily go back and recolor in that section with the marker. The gold chalk marker isn't quite as metallic looking. Since it's chalk, it's matte finish. 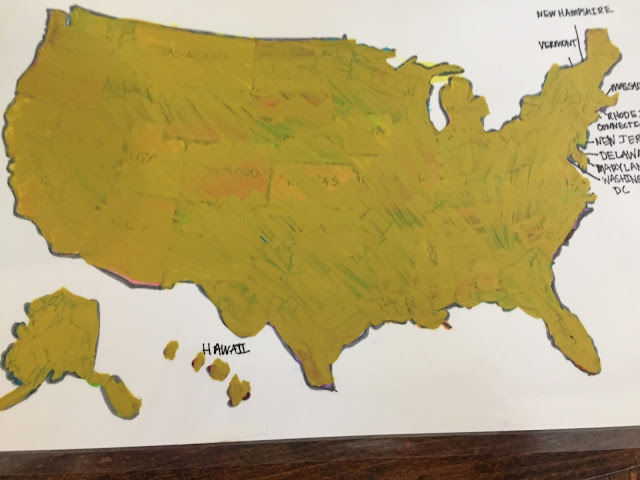 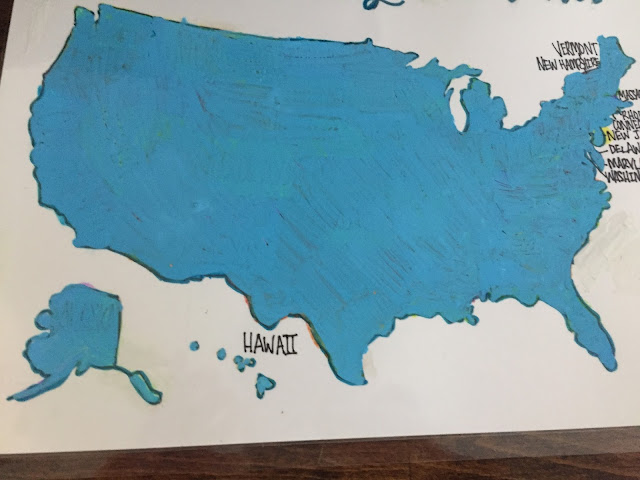 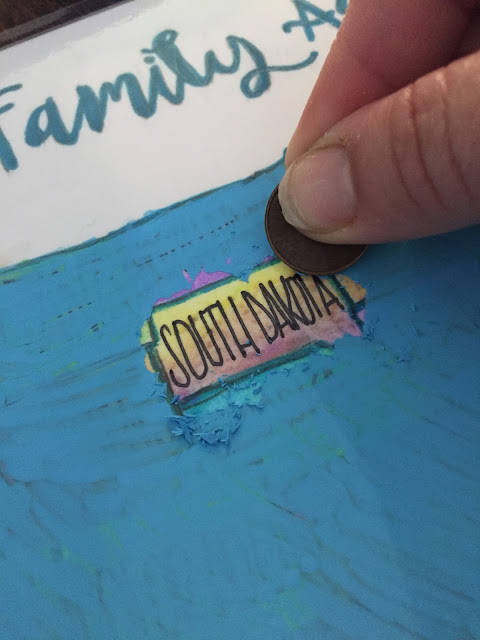 If you chose, the final step is to put the map in a frame. A document frame works well since the card stock is the same dimensions as most certificates. Take the glass out of the frame so you can scratch off states as you visit them. 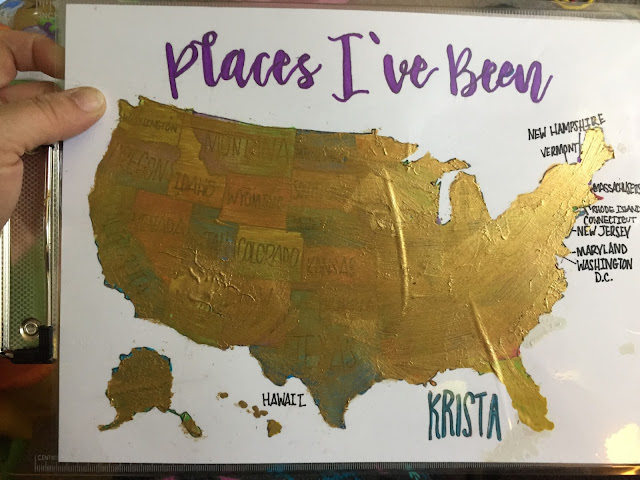 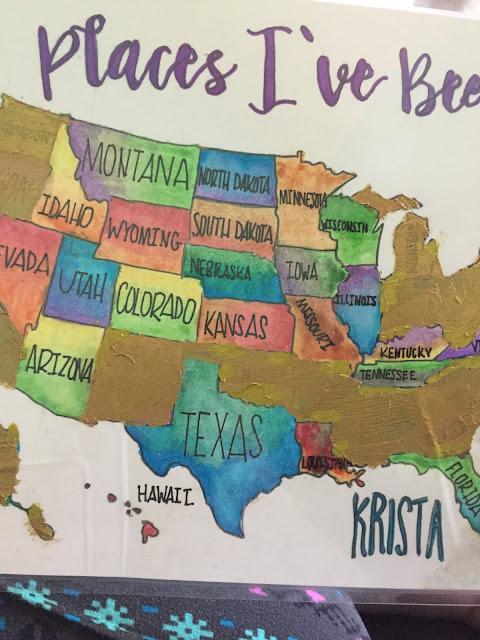 I hope this tutorial worked for you, and please let me know if you have any questions or comments below!