Hello Everyone,
Going with the kitchen remodel projects, I have another project my husband and I did over the past few weeks. We have an awkward kitchen. I have a mobile dishwasher and it would just hover in the middle of the room by itself. We also had a table shoved up against a wall. You would watch the wall while you ate.

So I wanted a super easy cheap fast island. I drew up these designs to allow the dishwasher to slide underneath. I also got a rolling silver cart to put my standing mixer on. (There isn't a cabinet that fits it) I got two stools for $60.00. So, I think the entire thing, including the two stools, cost around $100.00.

So my husband made the island. It's simple plain plywood with two supports on the sides. I got decorative trim and painted the island white. I could have gotten a legitimate countertop, but I decided to do something simple (and cheap) since we're going to be moving in a few months. So for the top, I just got an inexpensive heavy-duty shelf liner. I put some decorative scrapbook paper underneath since the liner was see through. This type of top can be removed and changed when I feel like I want to change the design. 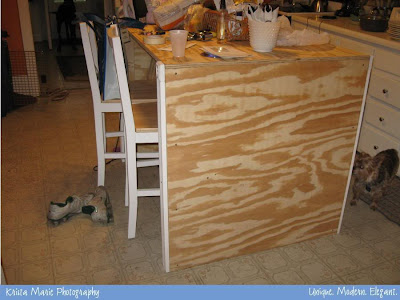 This is the island right after my husband built it, and I nailed the trim on the island. I (proudly) put together the stools. 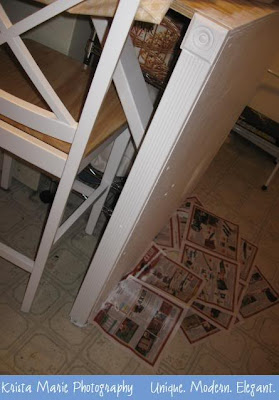 This picture depicts the "after" when I painted the supports and the side. I didn't have the top quite done, but it's nothing particularly exciting. Just a light blue top with a white-ish clear top. 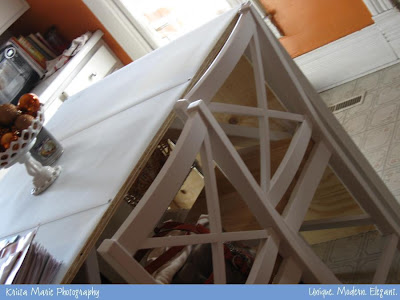 Finished top and all.