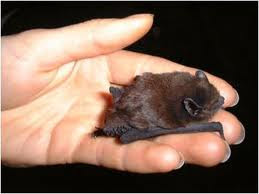 My husband is a man’s man. He likes sports, hunting, guns and his new cowboy boots. However, he turns into a 13 year old girl when it comes to spiders. I’ve been the household spider killer since we got married. While I certainly am not going to have a spider as a pet in the near future, I don’t have a problem killing them, especially if I have a vacuum with a really long hose or a nice flat shoe.

I don’t particularly like most creepy crawly things. As a child, I was fearless and would “hunt” snakes with my brother. We even tried to sell them out of our wagon on the corner of the street. (Surprisingly no one bought our prisoners) So, while I don’t like snakes or mice or spiders, I can deal with them when need be.

I met my match in college though. After bringing my brother home from his first college party as the responsible older sister, we were unlocking our front door on our enclosed porch. All of a sudden, a bat swooped down on us. My brother, being ever so loving and a bit tipsy, pushed the door open, fell inside the kitchen and promptly locked the door behind him. All the while screaming “BAT!” During this encounter, I was trying to figure out what was going on and why I was now locked out of my house. Since my brother couldn’t do his manly duty of pest removal, I asked a couple of drunken neighbors to come and take care of the little beast. In my neighbor’s infinite wisdom, he donned a golf glove, picked the bat up, and threw him outside. I didn’t point out to him that a golf glove with its several holes wasn’t doing a lick of good. They were, after all, providing a much needed public service. I thanked them with my brother’s beer.

My second encounter with a bat didn’t go much better. I was newly married, and my husband was out of town. I made a late night run to the grocery store. As I was coming in the front door, I had the same encounter with a bat swooping down on me. I panicked. My 26 year old self now realizes there is little to no threat of a bat outside your house in your enclosed porch. What was that bat going to do? However, my 22 year old self thought this was a life or death situation. So what do you do in a life or death situation? Well you call the cops, right? So, I call the non-emergency line and ask them to send an officer at their convenience. Maybe I thought maybe this was an animal control issue. And bless their hearts, they didn’t laugh and actually offered to help.

While I waited for the officer, I decided to Google ways to remove bats. There was an informative article about air currents and basically says, open a door and window and see if they will fly out. (Duh) So, I decide to try this “innovative” suggestion. Of course it works, and I have to explain to the officer why there is no longer a bat to rescue me from.

A Rude Awakening
So, I have a brief history with bats. I know that I don’t deal well in the situation. I’m not completely stupid (although I’m sure you think so after I called the police over what is basically a flying mouse). I know that they’re probably bats in my old house’s attic. After all, bats are like little contortionists. They can squeeze through super tiny holes. I don’t care if there are there so long as they aren’t in the actual house.

Three days ago I was about to go to bed. I usually read a bit with the nightstand light on before sleeping. As usual Adam is asleep before his head even hits the pillow. I see our westie jumping up at something. She loves to chase moths, and she’s a bit nutty, so I didn’t think much of it. Then I thought to myself, wow, that’s a really big moth. As the “moth” flew towards me, it was clear this was not a moth. I threw the covers over myself and shook my husband awake. I mean, after all, this isn’t a spider and he’s a manly man.

My husband reacted by yelling, “what?!?!?!?” (in a voice that suggested that I just told him a serial killer was in the room) Then, he accused me of lying and creating some elaborate ruse. I can’t blame him for thinking this. I am so nervous by the entire thing that I can’t stop giggling. How absurd is this situation?!?

Finally, I point out to him that the two dogs were clearly going nutty at this point. The westie had taken to jumping on the bed and diving off trying to get enough air to catch the bat. Our german shorthair was now in on the game and also jumping on the bed. Every time one would jump on top of me, I would flinch since I knew the bat had just flown over my head.

So, I ask him what we’re going to do. I expect that in his manly man class they explained pest control including bats that were dive bombing you in your bed. He suggests we just stay under the covers. At one point one of the dogs touches him and he’s sure the bat has landed on him. Hmmm. I suggest he gets up and deals with it because a) he’s a man and b) he has the rabies vaccine (a prerequisite of veterinary school). I am normally all about gender equality, but a bat is where I draw the line.

We go back and forth about what we should do (all the while under the covers and the dogs are on a mad hunt for the bat.) I explain that we have a couple of different options. We could open the window in our bedroom and take out the screen. However, we would have to lock the dogs up in the other room to prevent them from chasing the bat out of the second story window. We could try to capture it in a laundry basket or something of that nature. Or he could go to the basement and get his racquetball racquet and beat the thing senseless.

Guess which option my husband picked. Racquet it is.

He decides to cowboy up and get out from under the covers to assess the situation. At this point the crazy dogs have lost the bat. Great. Now we don’t know where the thing is. We go on a search. Turning lights on and peeking around corners like we’re about to come upon a vampire. I find the thing hiding in the corner of the bathroom ceiling. My husband keeps saying he just doesn’t want to deal with this. At this point, it’s apparent that the beating plan needs a back-up. So I sequester the dogs to another room, take the screen out of a window and explain to my husband that he should hit it towards the window. Since I’m not the one with rabies vaccine, I choose to hide in the other room with the dogs.

Before I close the door, I see my husband gingerly walking towards the bathroom with a racquet in one hand and a towel in the other. I have absolutely no idea what the towel is for, but I thought it best to keep my mouth shut.

With the noises I just heard, I thought it was certain that a) the bat was still on the loose, b) the bat had eaten my husband’s arm, and c) something was broken.

As I slowly peek my head out of the room, I see my husband leaning over my bathroom supplies. You know. Toothbrush, hair brush and make-up. Uh. He did kill the bat but not before beating it against the mirror and it landing on top of all my stuff. So, as I rock our daughter back to sleep, Adam does a clean-up effort.

We got little sleep that night, but we had a good laugh about the entire thing. My husband wasn’t afraid to admit that he reacted like a little girl, and I admit I probably should have been a bit more helpful and maybe stopped laughing for a few minutes.

Last night we were both asleep when I am slowly pulled from sleep. I hear our shorthair chasing something. My husband must have woken up before me, because I hear him say, “G** d*** it, I think there is another bat in here.” In my sleepy state, I thought (and maybe said out loud), “I don’t think he’s jumping up. It’s probably just a mouse or something.” It’s a sad day when a mouse becomes the better alternative. As I slowly wake up and my eyes adjust, I move the covers down and peek. And sure enough, there is another bat flying around. I then exclaim, “What the h***?!?!? Why do we have to deal with this again? What are we going to do?” We sit under the covers for a few minutes cursing our bad luck. I tell my husband that his racket is still by the bathroom. He starts talking himself up some courage to dart from his side of the bed (away from the door) to the bathroom. You know how guys do that? Where they keep saying the plan out loud hoping it makes them want to do it more?

He jumps up, starts yelling and turns on the light. I hear him start yelling, “Whoa!” to our shorthair, who normally is whoa trained….but not so much when it comes to flying bats swooping at him. Can you blame the poor guy? Then Adam yells, “There are two!” I groan. Really? So I ask him if I can get up to hide in the guest room. He kinda laughs and says, “No, they are right above your head.” So, he decides he’s going to hit them with his racquet while they are 8 inches from my head. I’m just envisioning him just knocking one down right on top of me. I’m cringing thinking of it. I know I would definitely lose it then. He smacks one and I hear it going over me and against the wall. He struggles but finally hits the other one. On top of my clean dress clothes. Of course. As I sit up, he says, “Oh, this one isn’t dead” and smacks it dead. On top of my clean dress clothes. Thankfully, this time our daughter slept through the entire ordeal.

We went on a quick search to find where they could possibly be coming in. We think it’s the craft room where there are these odd shelves in the alcove. We’re going to plastic them today, and hopefully we’re bat free here out. But, if we do have another bat attack, I know my husband will be there for me. He might scream like a sally, but he has defended me from three bats thus far. Just don’t tell PETA.

That is my worst nightmare! Hope you got everything sorted out and don't have any more surprise visitors! Great story, though. I was laughing the whole way through.

That was hilarious! To me, it would be time to move. :)

No matter how inhumane it sounds-- always KILL them. We learned from experience that if you take them outside and let them go, they will come right back in. Had about 5 last year. I HATE them!