Hopefully you read the title of the post as it was intended: in a monster truck announcer voice. Last week was one of "those" weeks. It wasn't particularly bad per se, but it did seem like I was down on my luck in the stupidest ways. First of all, my external hard drive where pretty much my entire life exists has become corrupt. I should blame either a) my new Mac...but we are still in the honeymoon phase, and that beautiful machine can do no wrong, or (b) my blatant disregard to the constant warnings to eject my hard drive properly. What can I say? I'm one bad arse.

Either way, all my videos, pictures and documents are gone..including my daughter's birth, first years of life, and all those pesky job applications and resumes I had so dearly written and slaved over during my 85 applications. At least I am a Facebook-aholic and most of my pictures are saved on my profile. Thank goodness for addictions! ;) I just imagine my Mac saying, "I told you so" about the hard drive. Oh Mac, you are so mean to me, but I still love you.

After that hard drive fiasco, my husband had his first "bad" test (I use quotations because we have very different views of "bad"...I view failing as "bad" where he views less than an A as "bad". I actually really view failing as a "well that sucks but I can't do anything about it now, so I'm going to enjoy this glass of wine." but I digress.) On Wednesday, my alarm decided not to go off, Thursday, the baby wasn't feeling good and Friday we found out she has an ear infection, and then I had an "incident" with chalkboard paint on Saturday.

Ah. Chalkboard paint. I have a love-hate relationship with it. First of all, I love the look of it. It's so 90's "coffee shop" (and I had many fond memories of coffee shops in the 90's...although I've had more with bars in the 2000's). But unfortunately, it involves chalk. I hate chalk. I hate the feel of it. I hate cleaning it. I hate having the dust everywhere (but it's only marginally better than those dry erase boards. I can't stand that static-like shavings that come off) 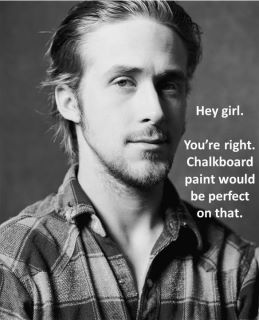 So, I gave into the trend and  bought some chalkboard spray paint the other day. It's kinda expensive, but I had all these wonderful beautiful ideas pinned, and I was just waiting for a marginally warm day to create them.

On Saturday, my husband had to study, the baby was down for a nap, I had prepped the surface and it wasn't ten below. It was like all the planets aligned and were like "USE YOUR CHALKBOARD PAINT PRONTO!"

The surface I was going to paint (well the first one...I had big plans for this little can of paint) was from this desk: 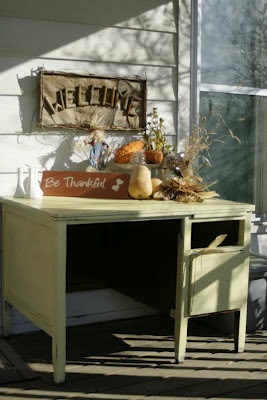 I got this desk for free on a chilly dark night in an alley. Well kinda. I actually found a listing for a desk on Craigslist and after agreeing to get the desk, I found out it was at a frat. The giver also alluded to "having to help him move it." I arrived in the dark alley behind the frat (said a little prayer to myself about not getting abducted) and soon found out that "helping him move it" really meant moving a solid wood desk down four floors in a decrepit frat house with unrecognizable stains and sticky substances abound. With much sweat and cursing, I got the desk to my car. I tried to put it on my porch but it was so big, and it looked plain silly. I found a replacement desk on a dark corner last week (apparently most my furniture hunting is done at that time) and this big one was out. But there was no WAY I was just tossing the frat desk after the work it took to get it. It had to have a bright future somewhere. Enter Chalkboard paint.

So, I had my surface on a drop cloth ready to be painted. I was trying to get the spray paint lid off with a screwdriver (it had one of those stupid tops you have to pry off) and what do you know, I punctured the spray paint can.

If you know me, I don't deal well with surprise situations. When my daughter decided to empty oil primer on to her face and try to eat it, I panicked and threw her in the shower. When she ate something out of the trash she shouldn't have, I took the water I was drinking and threw it at her. When my parent's house was on fire and I was in it, I kinda just stood there staring at the flames on the roof until my husband told me what to do. So, when I punctured the paint can, I didn't grab a rag to stop the spraying. I ran with it.

I'm sure all of those with simple logic can deduce what happened when one runs with a paint can spraying paint. It gets everywhere. I was very focused on my mission, and got to the board I had all ready. As the paint sprayed out the can in all directions, I attempted to save some of the chalkboard paint by letting it spray all over the board. After it coated the board thoroughly, I threw the can on the lawn. And by that I mean, I actually threw a can of compressed paint instead of walking it to the lawn. The can continued to spray in the air like a sprinkler. My lawn is officially a chalkboard.

After I threw the paint can, I looked around to see the damage. I had gotten some on the ground. I mostly got it on me. I was wearing my husband's new heavy coat. It was coated. My glasses? Completely covered in paint specks. My shoes were ruined. My pants, which were once white, are now this paint speck I venture was very popular in the 80's or during a 90's homecoming. My hands were black...including my engagement and wedding band. My tools were also sprayed.

What about that board I had prepped? My haphazard coat ended up not working, and I had to scrap that project.

After all that, I realize that the entire time, I could have just made my own chalkboard paint. I bought all the supplies for it at the beginning of the summer for these chalkboard windows. 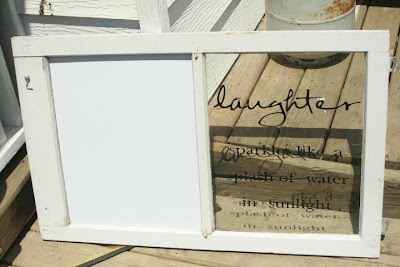 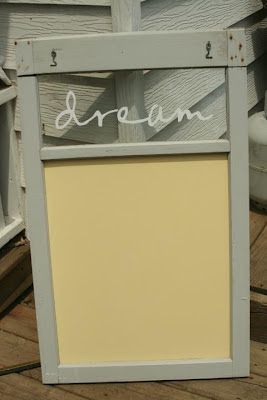 So, I went to work making my own paint. (Here's the recipe in case you haven't seen it pinned one million times on Pinterest) And to just show that the chalkboard paint it wouldn't beat me, I made a ton of it and ended up making like ten chalkboards in my house. Take that chalkboard paint! You will not conquer me!

I'm sitting on the couch feeling pretty dang good about my chalkboard adventure when my husband comes home. He looks straight me with a look of concern, "What is all over your face?!?" I had no idea what he was talking about. I go to the mirror, and I have black specks all over my face. I had chalkboard freckles! Compared to the other damage, they weren't that bad, but I had been walking around in public with black freckles all over my face. I got them off along with a couple of layers of skin. I think my various chalkboards turned out pretty good considering the collateral damage that came along with it. 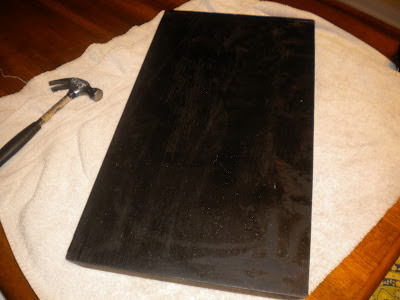 The board I had planned on turning into a chalkboard. It looks like it would work. Then I tried to write on it and all the paint came off. 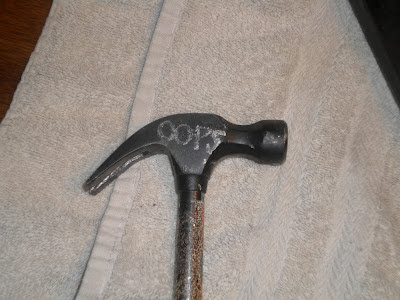 I now have a chalkboard hammer. 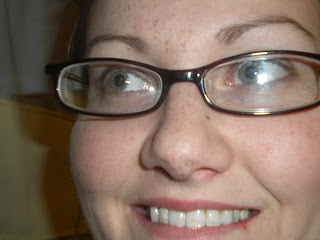 I was walking around with chalkboard freckles and didn't know it. 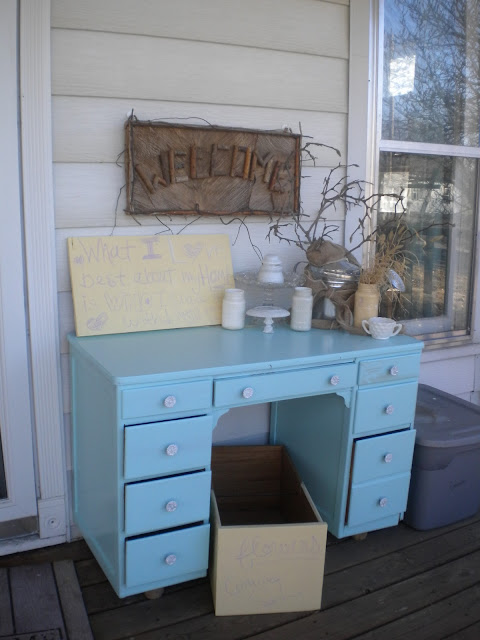 New desk with chalkboard on it. 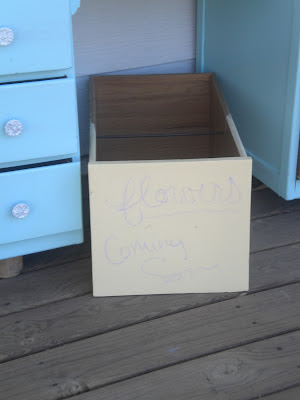 Chalkboard drawer from other desk. Will be used as a planter this spring. 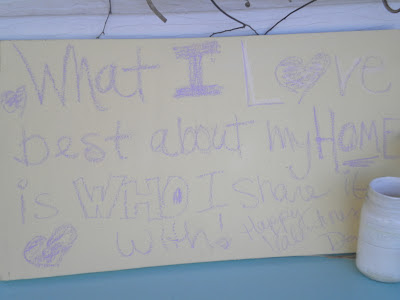 My chalkboard after making my own chalkboard paint and painting over the black. I'm going to change the words or drawing based on the season. This one was for Valentine's Day and said, "What I love best about my home is who I share it with." 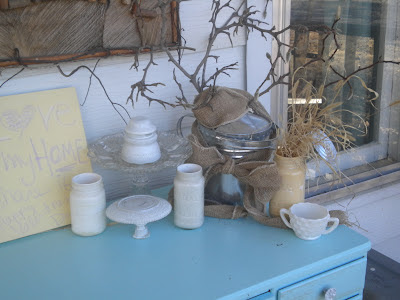 My painted glass jars. They will eventually have flowers or something in them. I have been dressing up that tree with seasonal stuff. I meant to put some heart ornaments on it, but I'm going to move on to Easter themed. 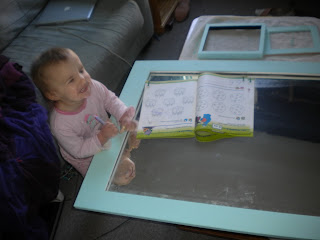 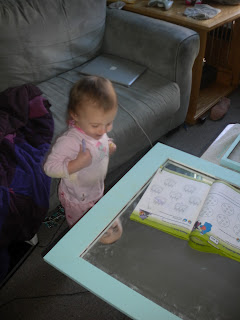 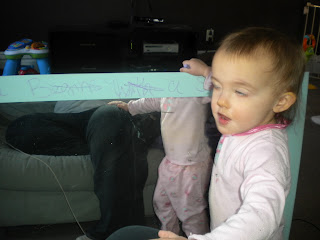 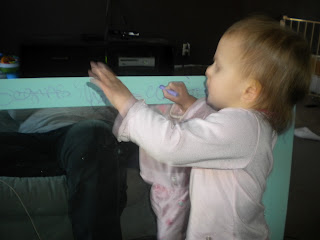 It did say, before my daughter's drawings, "Peace begins with a Smile."

LOVE this!!! You have a wonderful eye for color and form!

How fun is this for kids.. love it!
The blue color is my favorite.. :)
thanks for linking up at Friday Fun Party
Hani
craftionary.net

P.s:thanks for the lesson in the beginning.. I happen to do that all the time too, and it will be a heart attack if I ever lose my stuff from a usb..

Too funny! Not the black chalkboard paint fiasco, but your retelling of the mayhem. ;)

Thanks for linking to Time Travel Thursday. I hope you'll join the fun each week.