This last weekend was my 10 year high school reunion. It was a great weekend. I saw a concert, went to a couple of events with my class and did another color run!

It was by chance that I ended up doing two color runs within 2 weeks of each other. I had already signed up for one, and my friends all started signing up for the second one...so I have two to compare now.

The two events were for pretty different size. The Color Run was in Des Moines, Iowa. It had around 30,000 participants and went around downtown. Run or Dye was in Rapid City, South Dakota. It definitely didn't have nearly that much...maybe 5,000 or so? It might be less. That's the number the Rapid City Journal is reporting.

If you'd like my tips about running a Color Run and keeping the color, see my other post here.

I understand that The Color Run was in a metro area compared to the location I ran the Run or Dye at, but the Run or Dye run was terribly planned. First off, they didn't leave the fairgrounds they started on. That meant that you ran on grass, asphalt, a trail with potholes the size of a small child, and the best part...in circles inside a building. It was crazy. Plus, I had my Nike+ on for both races. The Color Run was right on. Run or Dye was only 2.6 miles! I imagine people thought they got killer times when they cut a half mile off the race! 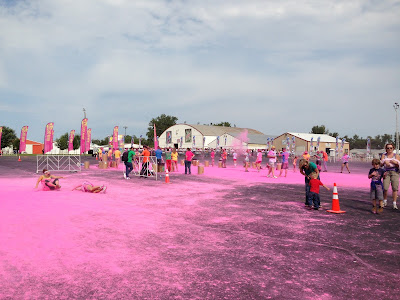 The Color Run had Blue, Yellow, Orange and Pink. They also had purple and green available in packets. They had a mist water thing too so you would pick up more color. It was a good idea, but the color didn't seem that bright or saturated. Run or Dye had Green, Blue, Yellow, Pink. Purple was also available in packets. You got a bit more color in your packet and it seemed much brighter.

The Color Run had a main stage that was pumping out dance music and doing Zumba before the race. Then when you got to the chute, the DJ was pumping music, throwing out free stuff and generally rocking. Not to mention the packet pick up was also a dance party in its own right. They also had a bad arse store to get all sorts of different stuff. (Run or Dye didn't have as much of a selection). Run or Dye didn't have a main stage playing music before the event and the music they did play in the chute was terrible. I mean...come on! Play music to pump me up...not slow songs! The stage they did have after the race was the same problem. Not to mention I swear I heard the "DJ" yelling at people every five seconds ("I told you not to use your packet yet" "You need to pay attention to what's going on up here"). Not the go lucky attitude of The Color Run. Plus The Color Run had more signage that was fun, more people moving around, a unicorn and a conga line!

So, I had tons of fun at each race, but I'll definitely hit up The Color Run again and pass on Run or Dye. I did hear that "Color Me Rad" is a fun race and they use liquid color as well. 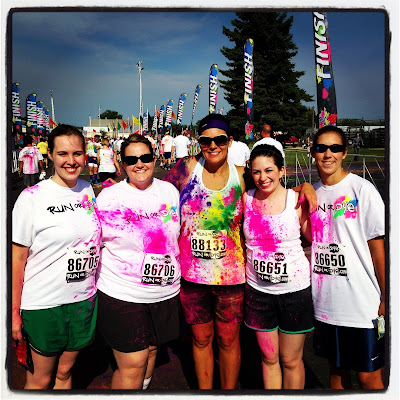 Our "Before" Picture...we may have gotten some paint before the race started. 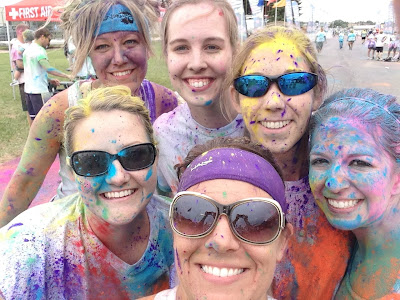 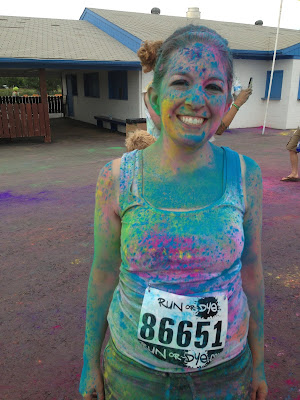 Our friend got crazy insane color! 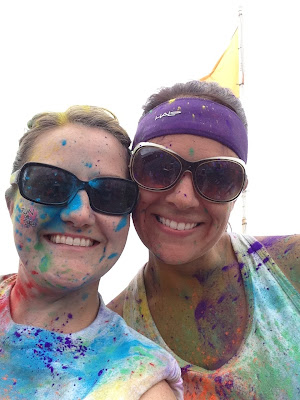 Loved reading this! Thanks so much for getting colorful with us at The Happiest 5k in Des Moines! What an amazing day. We take a lot of pride in putting on amazing events, and LOVE that you left smiling. Here's a GIANT virtual high five! Hopefully we'll see you again!

Did you by chance try to preserve this run shirt? I read your earlier attempt and was wondering if you had the same results? Or did you find a method that worked better? Thanks for sharing :)

Hi Chanda! I didn't even have a chance to try. The color shook off before we even got it in a bag to get in the car. I've decided that I'll probably just use it for tie dying. I'm thinking I'm going to try the ice dye method. :)