DIY Thursday: How to Remove That Ugly Backsplash

The Ugly House is slowly making progress to no longer fitting its nickname. One huge leap occurred over the past three weeks. The infamous red tile is gone. (This red tile really is infamous….I would mention the house we bought to people I just met, and they already knew about the red tile. It has a reputation among fellow Zillow listing stalkers.) 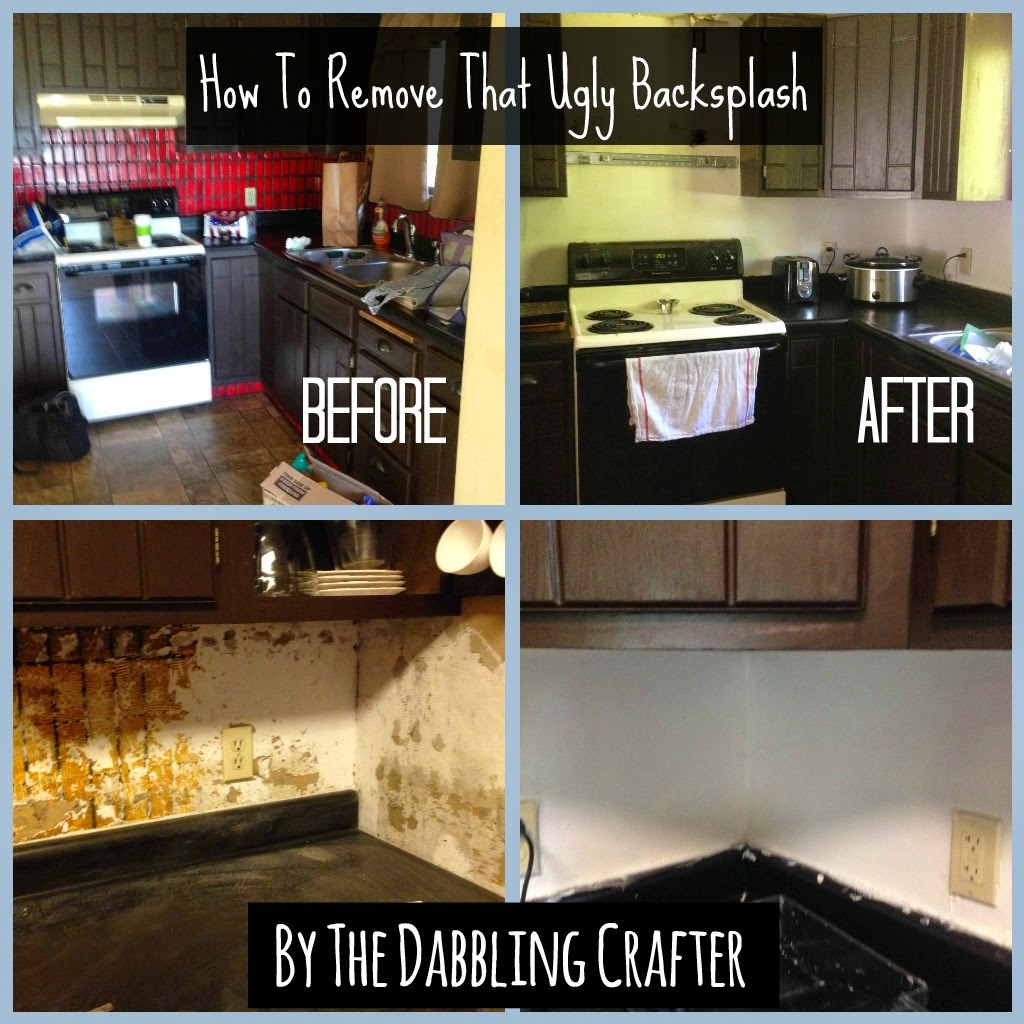 How To Remove Backsplash Tile in 1 Billion Steps


Okay. 1 billion is an exaggeration. (Fun fact, my husband once dumped me when we were dating because I exaggerated too much. No joke.) However, removing ceramic tile really is no joke. It was a solid three weeks of 4-5 hours of work. I am still sore. It was like cross fit for DIY’ers. Okay. Probably more like “Curves” but you get the idea.


**Note: Due to the dust, may of these pictures are blurrier than I'd like. Sorry about the terrible photography!** 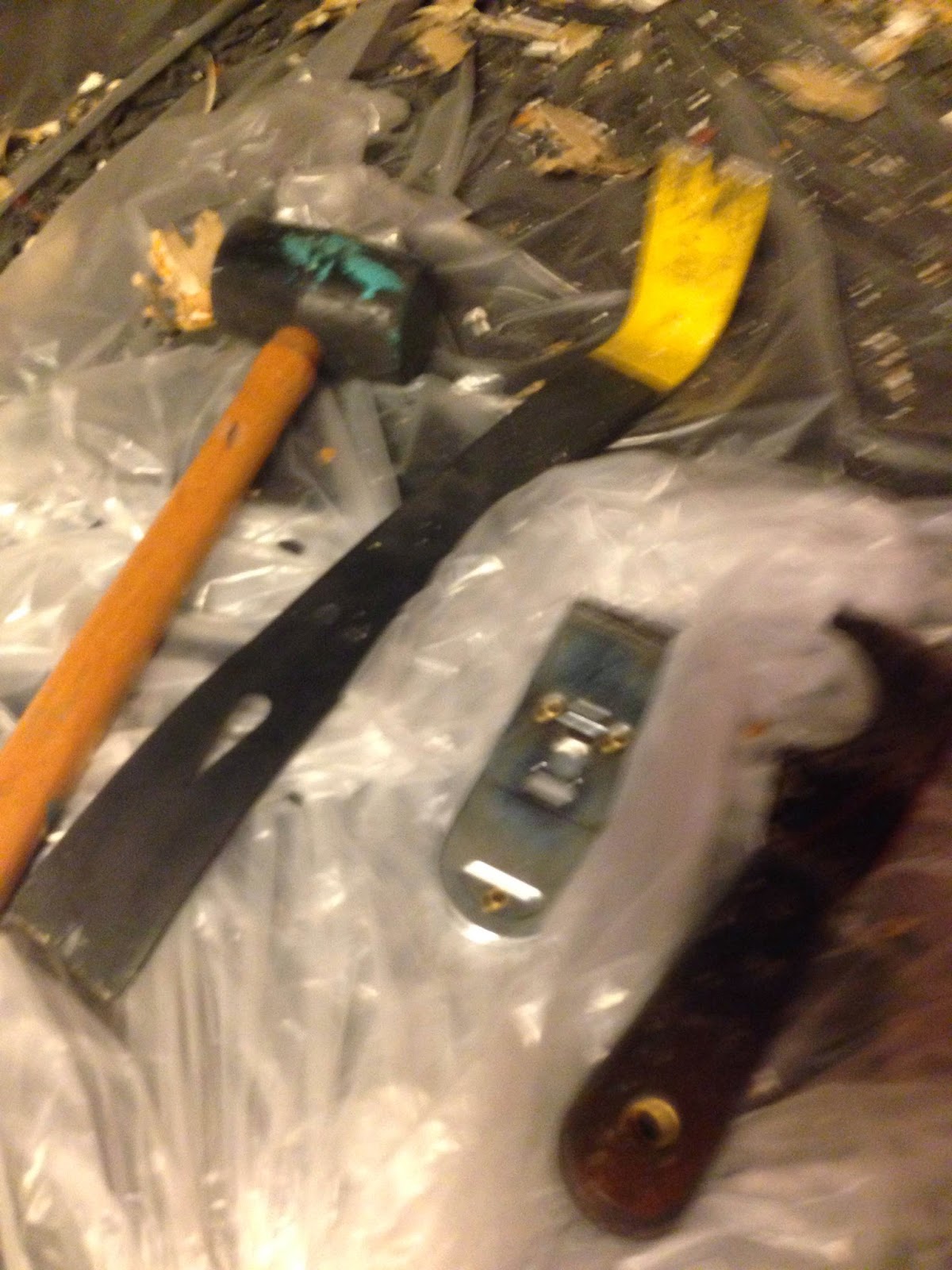 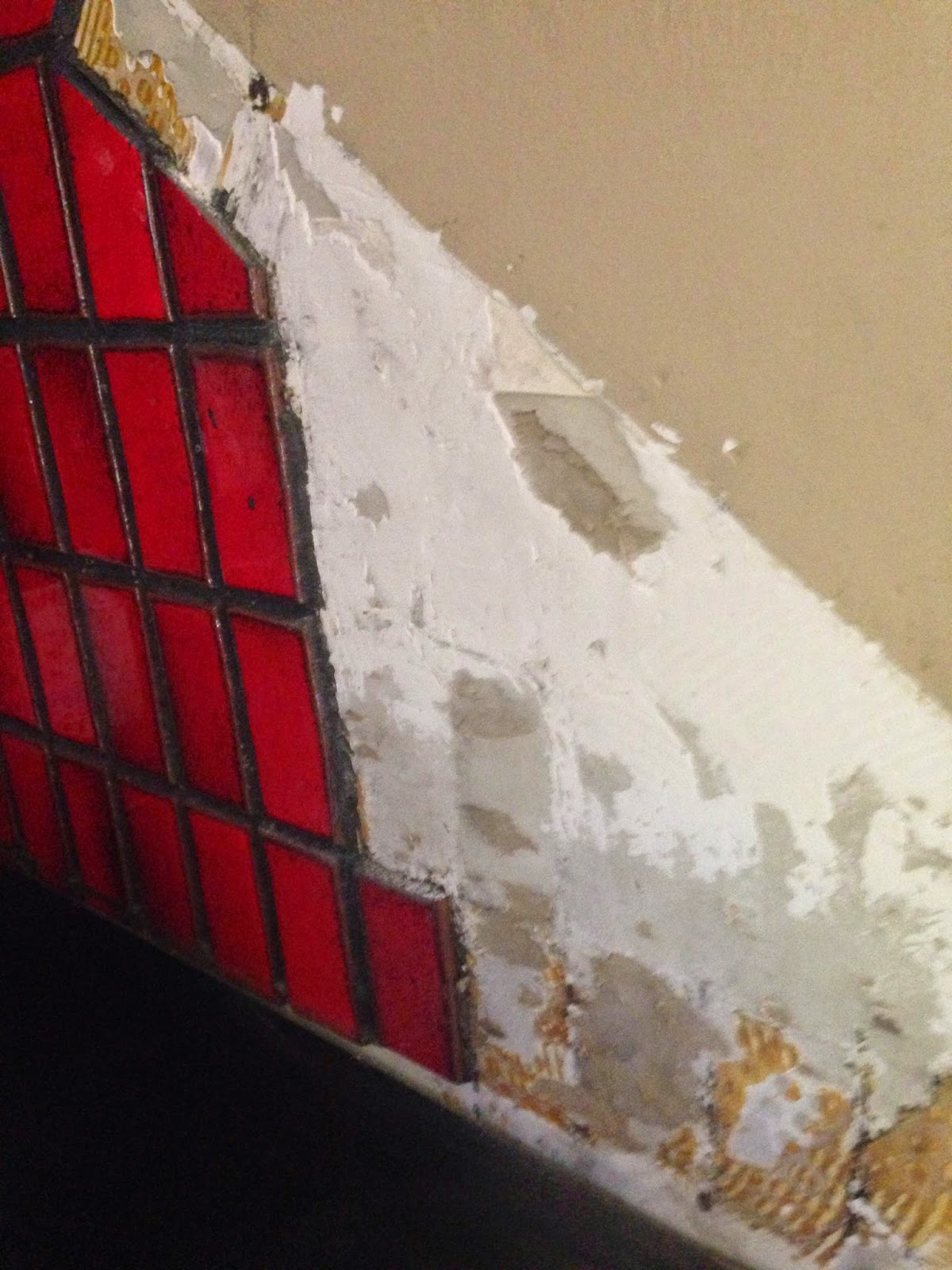 I did a ton of research before I started breaking tile. The first consideration, is the tile even worth removing?

Many people will tell you that removing the drywall is going to be faster and easier than just trying to remove tile & salvaging the drywall. What if you start removing the tile and you destroy the drywall? All your time carefully scraping thin set will be all for not. If you have plaster walls, you have even more decisions to make. Patch drywall back in? Try to save the historic plaster?

We weighed the pros and cons of each. We didn’t want to remove the cabinets until we were ready to replace them, so removing and patching drywall would have been difficult. We also didn’t want to spend the extra money on drywall. (We can spend time scraping, but not the mo-la replacin’)

Removing the tile it was. Now came several tutorials online and You Tube videos to make sure we had the proper technique. It’s pretty simple. You need to use something nice and flat to get under the tile, but avoid gouging the drywall. I tried a putty knife, but it just wasn’t strong enough. A 5 way paint scraper was flat enough to get under the tile but also keep the dry wall in pretty good shape.

(a)     Turn off the power to all outlets and switches you will be working around. My husband learned the hard way that a metal scraper and an exposed outlet don’t mix well. (And they gave this guy a doctorate?)

(b)      You may want to take the time to put down a drop cloth and secure it below the tile with painter tape. The grout creates quite a bit of dust and cleanup is much easier if you can just throw away a drop cloth. Keep in mind, we are trashing our countertops, so we weren’t concerned with getting them dented or dirty. If you have larger tiles, you may want to also cushion the countertops to avoid dents.

(c)      I would slip my scraper up to the grout, tap a couple of times using my rubber mallet until my scraper slid under the tile. For the most part, our tile came down pretty easy. Some corners were tricky since we didn’t have an exposed edge. That’s when we would use the crowbar, although it usually made a nice gouge in the drywall.

(d)      You will want to start with an exposed edge if you have one (if not, you might need to hammer up a tile to have somewhere to start). I did a three foot section and then would scrap the thin set that was left behind.

(e)      Rather than using a trashbag, we chose to use a bucket for tile that came off. I found that helpful hint on one of the pages I read. The tile is sharp and even cuts the flex trash bags. Plus, a bunch of tile is quite heavy. A bucket is a nice sturdy container for tile that comes off the wall.

(f)      Our grout was pretty thick, so each time we took a tile off, the grout would easily come off with it. The grout was a dark black, so there was a ton of black dust in the area. I found that it was necessary to wear a dust mask as I was removing tile. Also, some genius decided to just cover part of the soffet with a layer of grout. That was extremely dusty to scrape off. 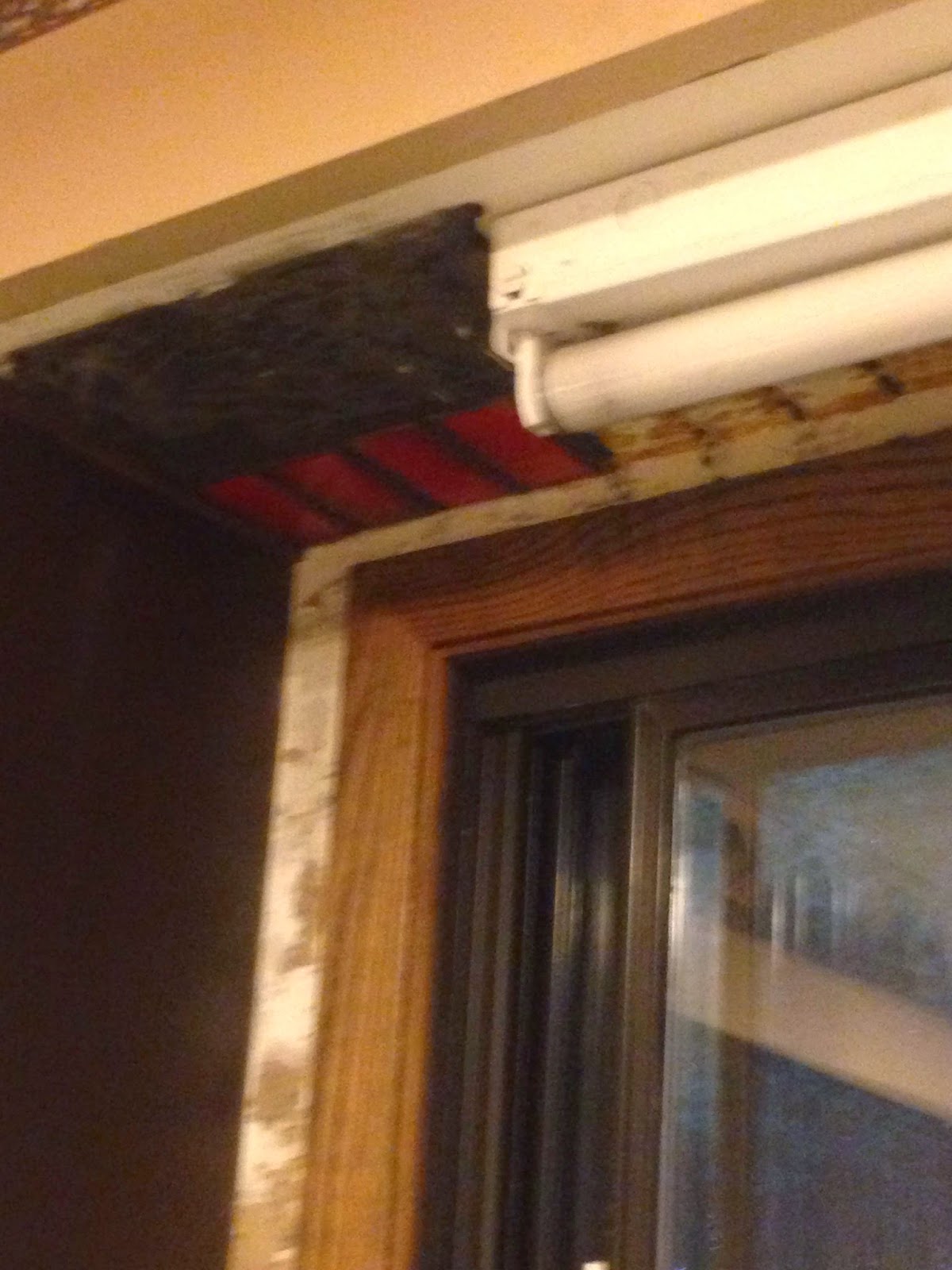 Grout and tile on the ceiling/soffit. And a crooked ugly light. 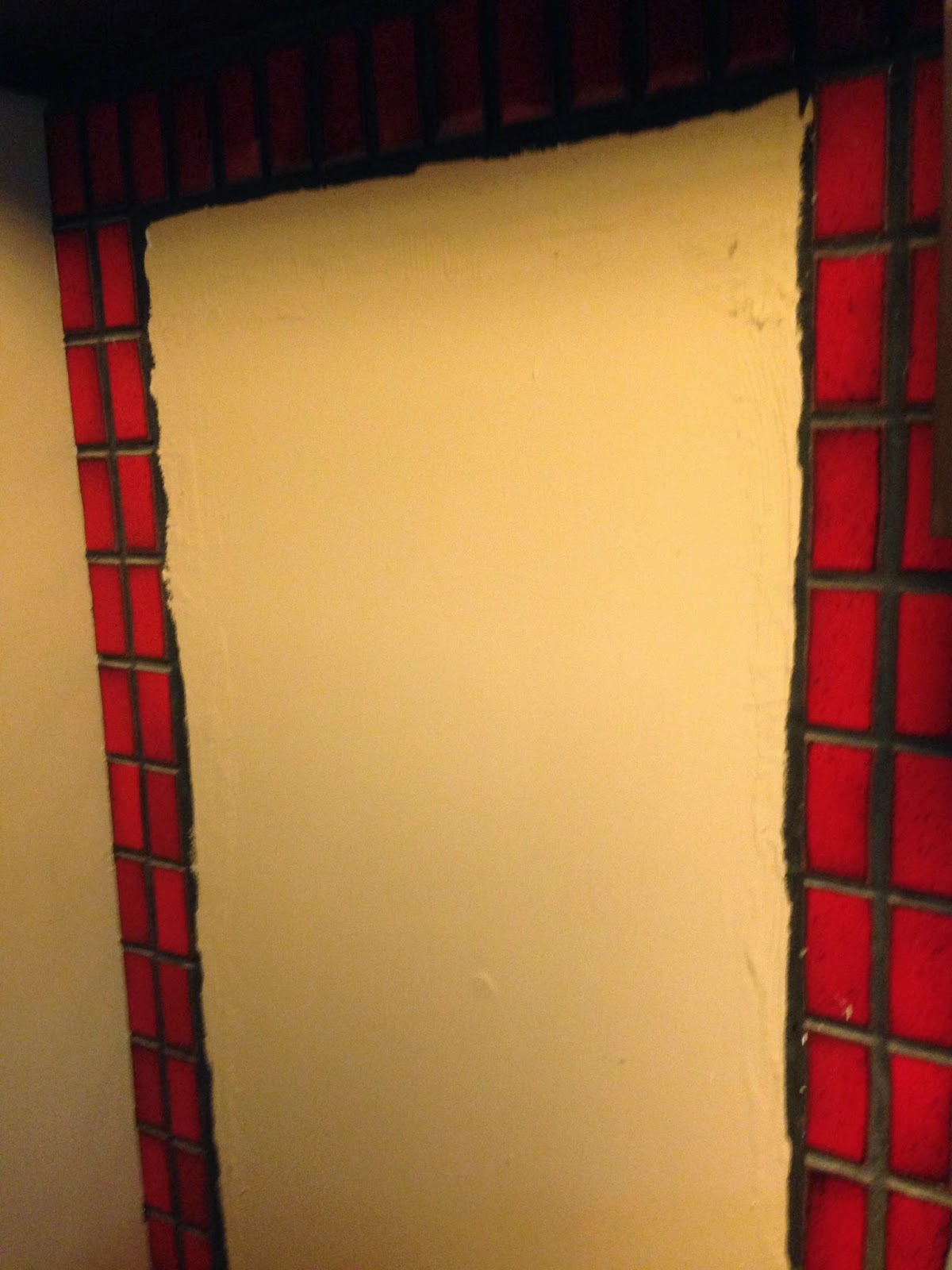 I was so relieved to learn they didn't tile the entire wall behind the fridge...but they had black grout in between and then painted it. So, a ton of dust from scraping! 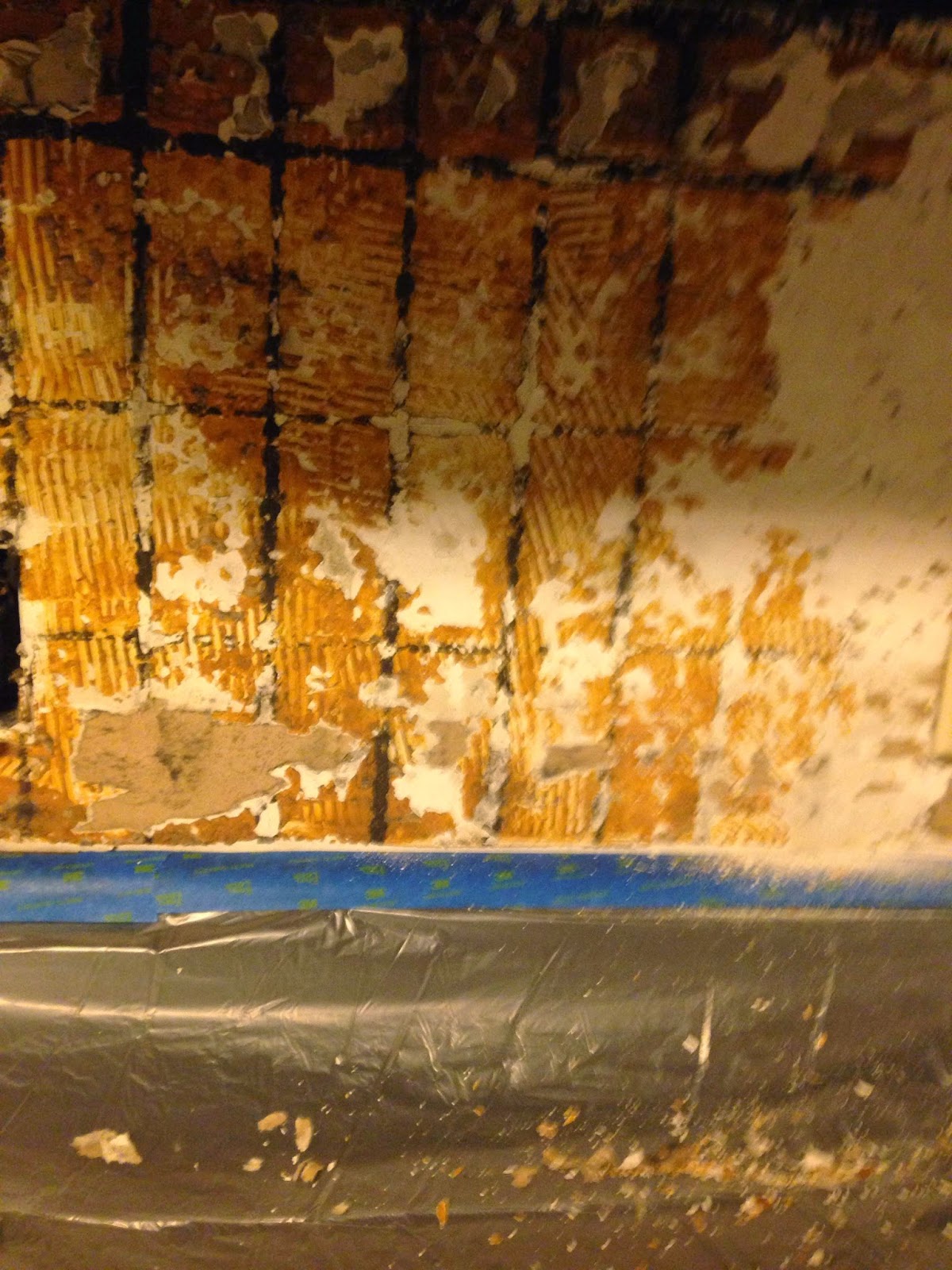 The glue/thin set. As you can see, the bottom didn't have the skim coat so the drywall came off with the tile. 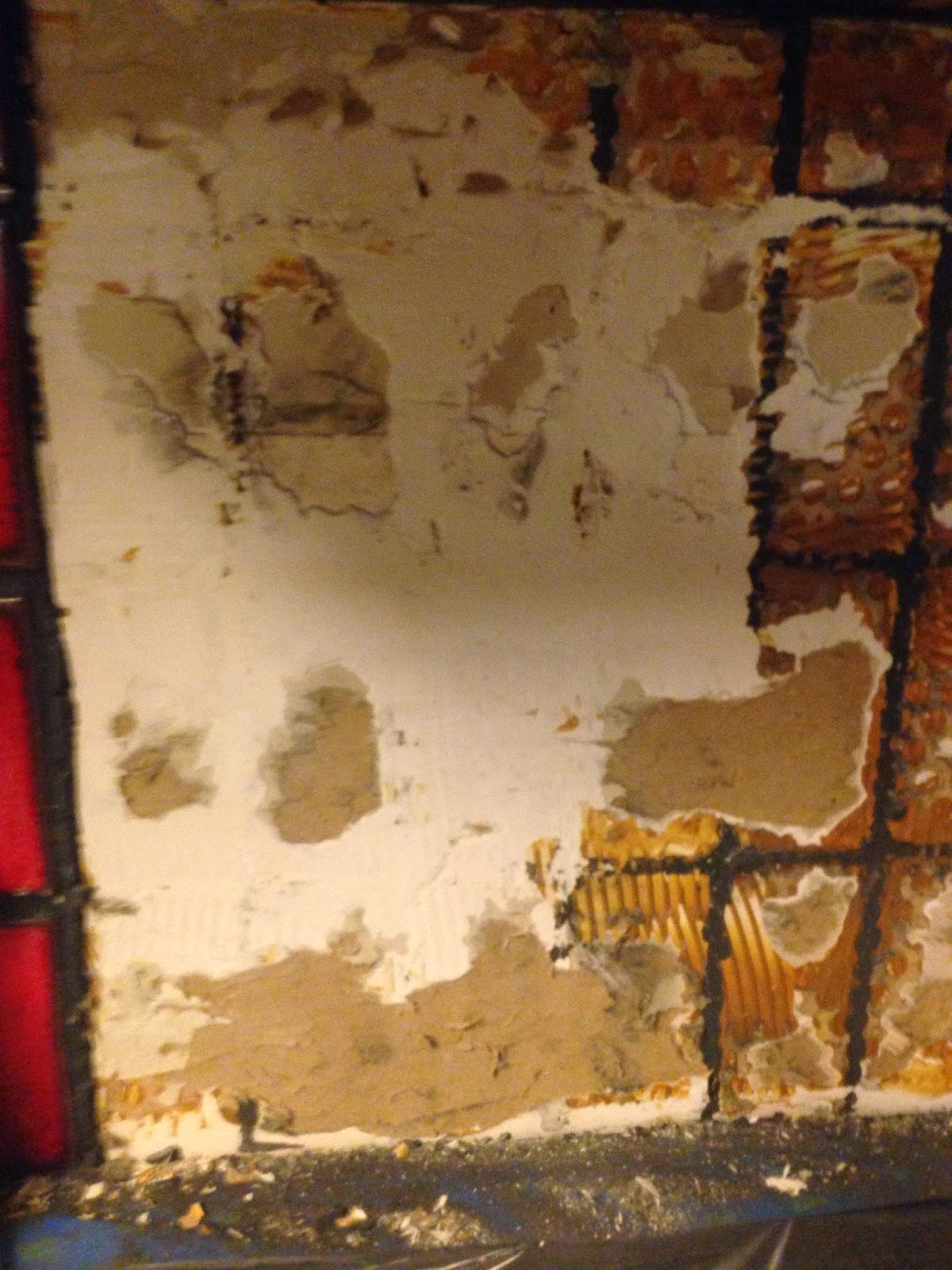 What the wall looks like after getting some of the glue off. The white portion is the old skim coat. 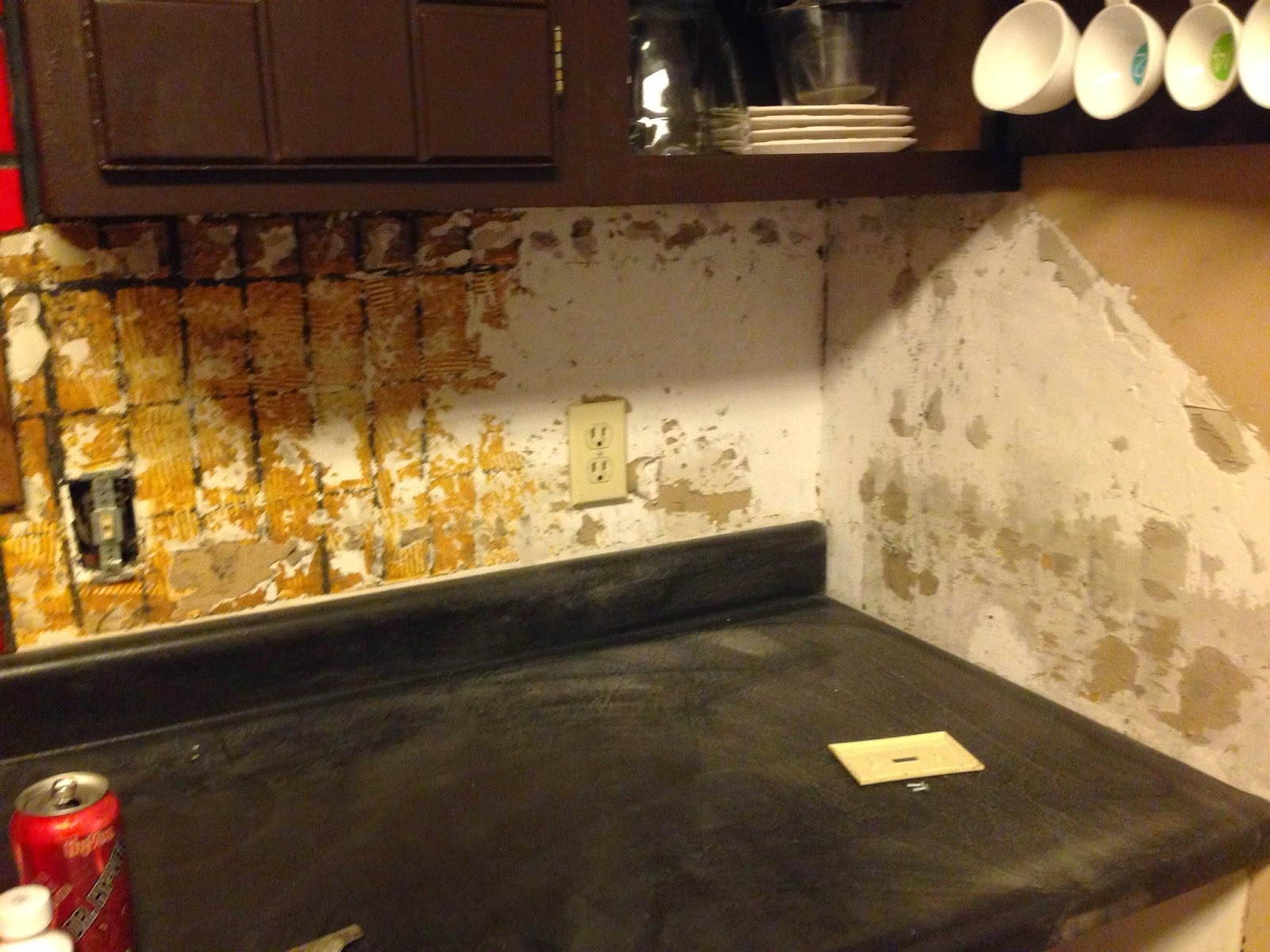 We found that getting the tile off the wall wasn’t terribly hard. It seemed to move pretty quick, plus it was fun. The real work as removing the thin set (we are calling it glue) that remained.

Our wall seemed to be a bit unique compared to what I saw online. When the tile was put up (which turns out, from speaking with our neighbors, the tile was put in just a couple of years ago…not the 1980’s that I would have sworn by) they did a skim coat with joint compound. That was a God send. The tile that was stuck to those areas came off without pulling the dry wall off. However, that skim coat didn’t cover everything so some of the tile pulled off the top paper layer of dry wall with it. That can be fixed, but it makes scraping more difficult.

(a)       We found that a combination of the paint scraper and window scraper (The kind that uses a razor blade) worked well. For the areas that were attached to the skim coat, the window scraper cut off part of that layer along with the glue without harming the dry wall underneath. Those areas went quick. For areas next to exposed paper, the paint scraper was a bit gentler to try to remove the glue.

(b)       You may know this, but dry wall is in layers. Layers of paper cover a gypsum core. We only got down to the gypsum layer twice. That’s good. Patching becomes more complicated if you have exposed gypsum. Exposed gypsum cannot come into contact with water. Priming is extra important. If you have exposed paper, use a utility knife to cut the pulled away paper instead of ripping. A nice clean line is better than a jagged rip across the entire piece of drywall.

(c)       Prepare for this to take a long time. Some of the glue came off super easy, but some areas were extremely tedious. I spent an entire evening on a little 12 inch square. My husband doesn’t have a soft touch when it comes to things like this so he was ripping paper like no one’s business. That isn’t a terrible thing, but it does add more work down the line. Best to work slow and steady. And keep that power off to the outlets! 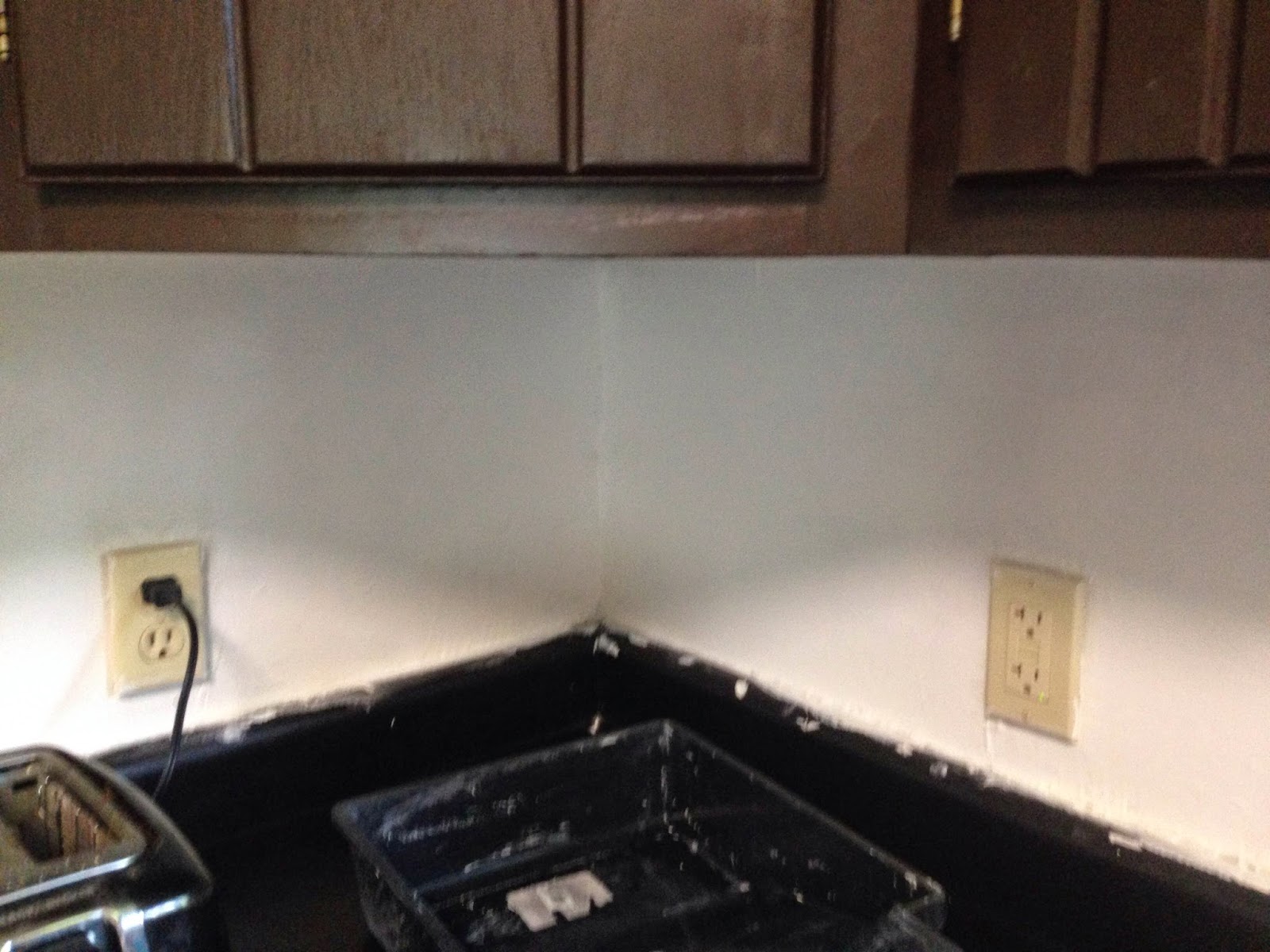 Once you have removed all the glue, you are now ready to prime the remaining dry wall.

First, you need to prep your surface. Look for pieces of paper sticking up. You need to cut those with a utility knife, or you can lightly sand with a fine grit sandpaper…but be careful not to make more rips! Get the remaining dust off the wall. I have a large brush/small broom I use to remove dust when I’m sanding. That worked great.


You must use oil based paint.

No latex. Nothing water based! Dry wall needs to remain dry, and water based primers/paint will cause the exposed areas to bubble. I read a tutorial that said the author just uses random oil based paint he find in the mistint area of the big box stores especially if he’s going to cover up with new tile. It doesn’t matter what you chose, you need to make sure it’s oil based. Now, there is always an exception to the rule. There is one primer on the market that is meant for repairing ripped dry wall and its water based. I believe it’s the Kilz Klear (but I might be wrong on that). I had some Zinsser oil based primer, so I used that to prime my walls. Since we’re replacing the countertops, I didn’t have to tape anything off. 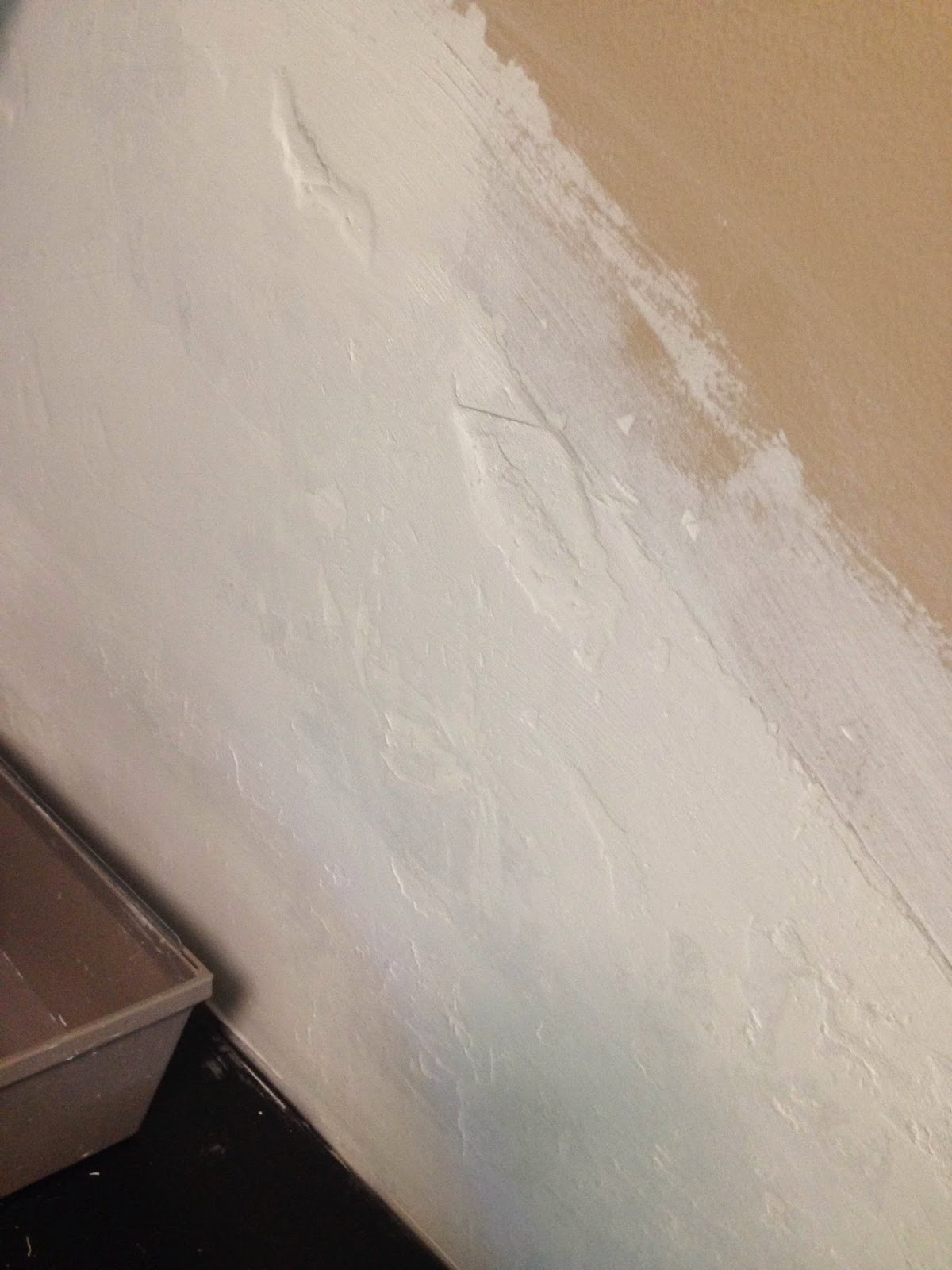 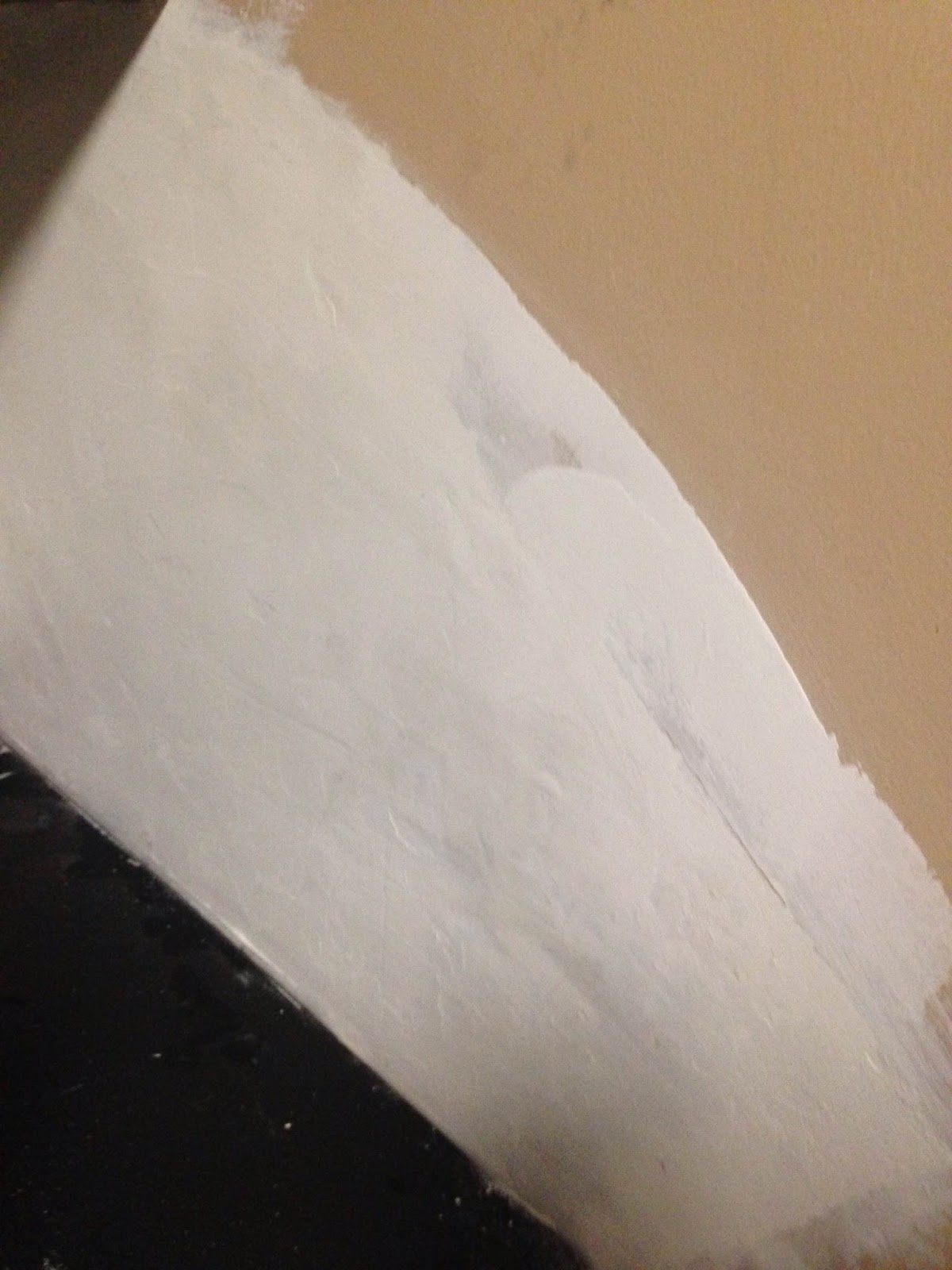 Now that you have a dried primed wall, you need to do a skim coat with joint compound. I’m no expert at joint compound. This was the first time I had ever used it. Basically you use the putty knife and place the joint compound on the wall much like you ice a cake. Follow the directions on the container. My joint compound had to sit for 24 hours before moving on to the next coat.

Once your joint compound has sat for 24 hours, lightly sand using your wet sanding sponge. These sponges are pretty much the best invention ever. No drywall dust to cover everything in your home. You just need to lightly sand…I got a bit crazy with my first sanding and ended up having to do extra coat.

For my second layer, I looked and felt what was uneven and only did a skim coat in those areas. I repeated my waiting and sanding process from before. On the last coat I filled in the large holes that still needed some extra compound to even out. Is it perfect? No. Would have new dry wall been better? Perhaps. I am not versed in doing dry wall (it’s been about 10 years since I’ve done it), so it probably would have been equally uneven. 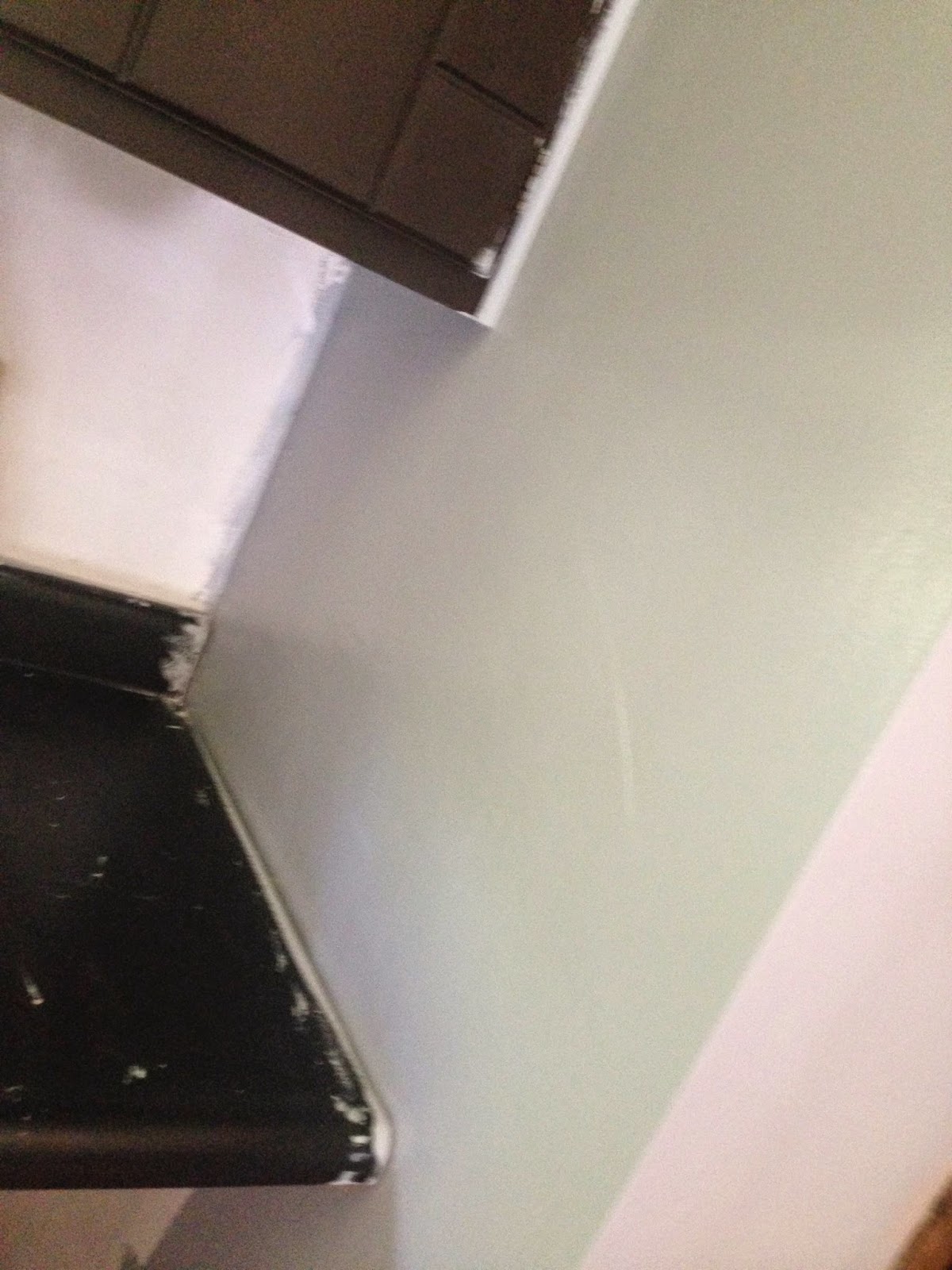 Go ahead and do another coat of primer. You can use water based at this time if you wish to, or use a paint and primer in one. On the areas that are getting tile in the future, I just did primer. On areas that are going to remain painted, I did a Paint & Primer in one. Olympic One is my all-time favorite brand, so that’s what I used.

Side note on the paint color. I picked this grey because I loved it my old house. I do like this color in our living room, but it seems to have turned really blue in the kitchen. I can’t figure out if it’s the lighting or the fact it’s going over the tan in some places, but I’m not so sure I like the color. Might need to change that in the future.