This past weekend my family threw my mother a surprise 50th birthday party. When my dad decided on the party a few months ago, I volunteered to do the decorations. One, I love to do party decorations because it's a way to try out new DIY projects. Two, I knew as a fellow woman I wouldn't be all that thrilled to have a party full of references to my ever growing age. So instead of using the typical party store "Over the Hill" theme, I decided to do something more appropriate for my mother. The theme was "Aged to Perfection" and played off her love of wine. This theme would also work great for a whiskey lover as well.

The color scheme did use black, but paired with gold, it's not quite as morbid as the normal 50th birthday decorations. When I started planning the party decorations, I gave myself a budget of $100.00. I figured that was do-able since I already have a rather large party decoration stash (although it's mostly vintage not old Hollywood glam). I'm happy to say with a ton of DIY, I mostly stayed within that budget.

I'll show you those various DIY projects in a second, but I wanted to take a minute to point out the photo booth. I did a really simple photo booth knowing what a ham my daughter (well...and my entire family) is. It was a real hit and was a good way to remind everyone to take pictures. I would highly recommend whipping something up for your next party. I know I will do it again. 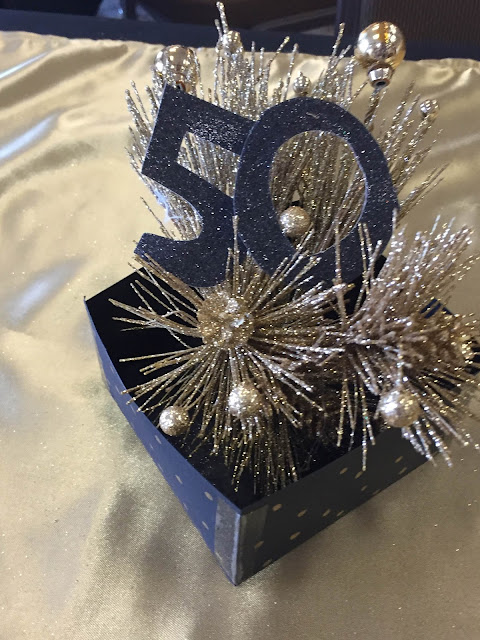 When I plan my decorations for parties, I become a bit obsessed with making lists. I like to have things organized in my head so I know what to make when, where to pack it and what order to unpack on the day of decorating. I usually organize the decorations by a "zone" and then come up with ideas from there. So the first "zone" is the table scape. I rented black table cloths from a local party supply store. I then bought 4 yards of this satin fabric. I cut it down the middle and hemmed the edges. Those became my gold table runners.
As for center pieces I had three different items. The first was this DIY black box. I made the boxes out of black cardstock I already had on hand. I then jazzed up the boxes with dots from a gold Sharpie marker. The boxes were stuffed with these Christmas tree picks. Can you believe Christmas decorations s are already available at stores?!?! I had some extra black glitter cardstock which I used to make the "50" numbers. 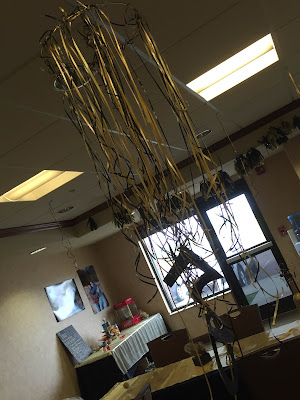 I made a "chandelier" using black and gold curling ribbon, a metal hoop and black glitter cardstock. If you have a drop ceiling in your space, it's very easy to hang decorations from it without any damage to the property. I simply used paper clips to secure this decoration. 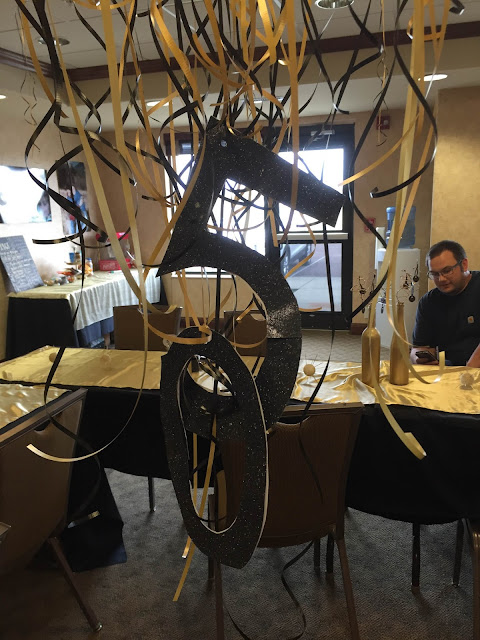 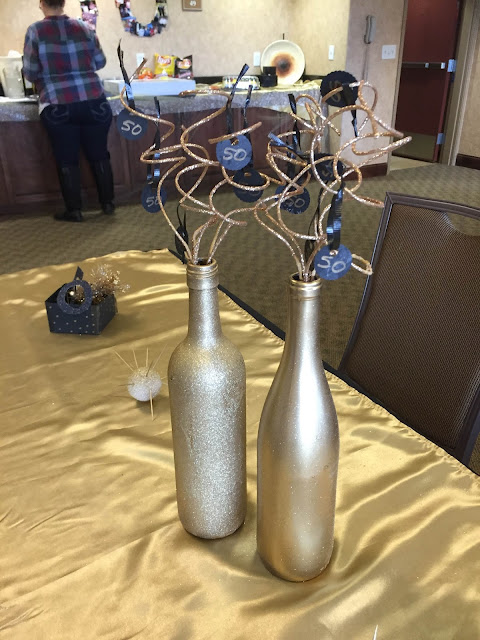 Since wine was the theme of this party, I used empty wine glasses as decorations. Each wine glass had the label removed, spray painted gold with gold spray paint and then gold glitter blast was applied on top, followed by a clear coat. Christmas tree picks were inserted with DIY "50" ornaments hanging from the branches. 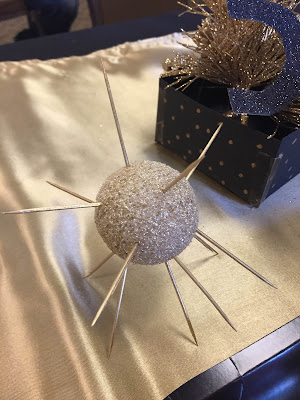 Admittedly these decorations were a bit strange. I saw the idea on Pinterest and decided to give it a try. The center is a styrofoam ball spray painted with glitter blast. The tooth picks got a coat of gold metallic spray paint. It's supposed to be a throw back to the atomic star decor, but it's kinda like a food fight land mine. These styrofoam balls sans toothpicks *may* have become a glitter snow ball fight at the party. 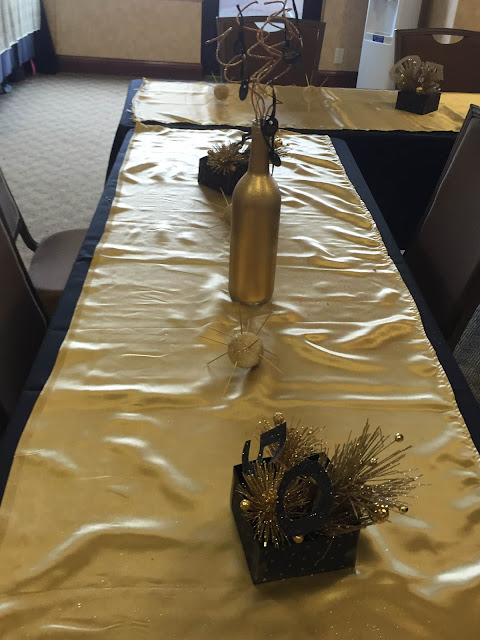 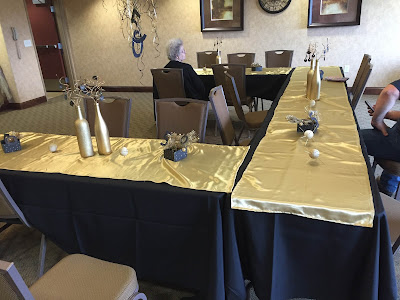 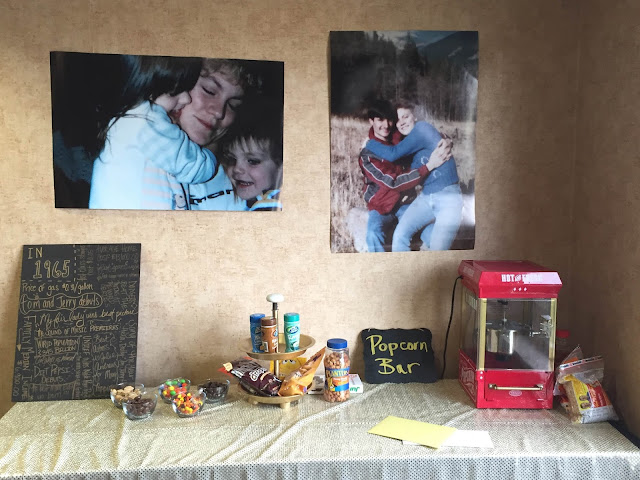 Since my mom is a big fan of popcorn and we needed some snack food for our game night, a popcorn bar was perfect. My mom has a mini popcorn machine that my dad covertly got to me before the party. I got candy toppings as well as different seasonings. You can't tell very well from the pictures but the top of the table is covered in gold sequin fabric. I got two yards of this cut and without doing anything to it, it ended up being the perfect size for the table. 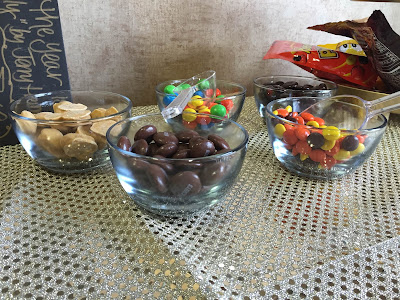 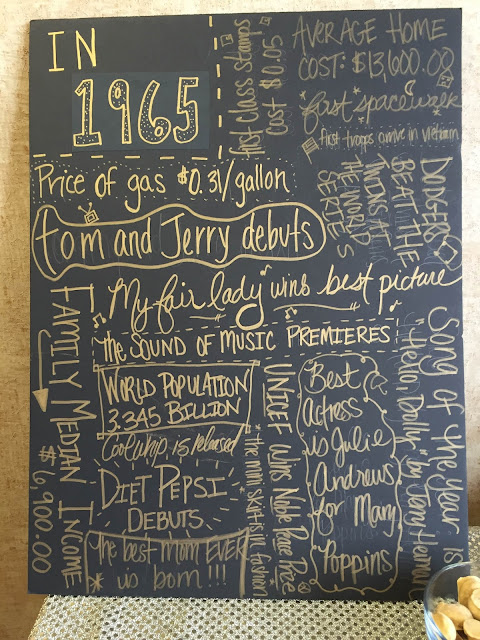 This project was a really easy one. I got a small piece of black foam board and, using a gold metallic Sharpie, I added some facts from the year my mother was born (Google for the win!). Ironic enough, my mom is a huge Diet Pepsi fan. Apparently it was just meant to be. 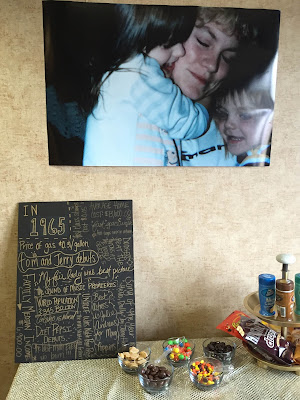 One easy decoration was these large poster size prints of my mother from when she was younger. Wasn't I a cute kid? I found these snap shots as I went through all the pictures my dad gave me. They both came from 3x4 prints. I did some research and found the trick to blowing up pictures from small prints is the resolution of your scanner. Set your scanner to the highest quality resolution it will scan and then you can get pretty good quality large format pictures. I did touch up both pictures to remove any dust or scratches from the pictures. If I would have left them, they would have looked huge once the print was enlarged. 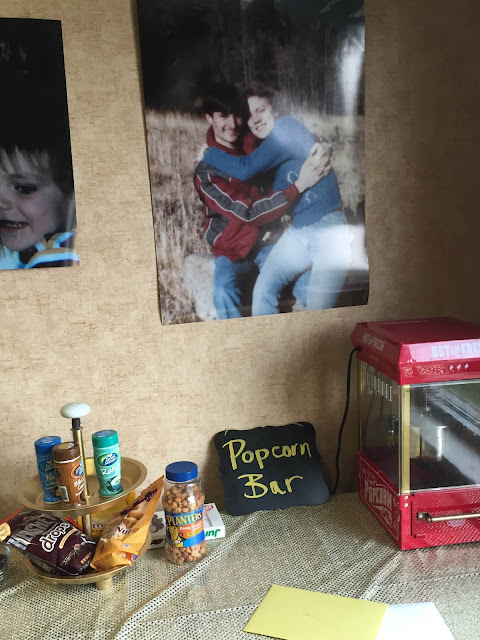 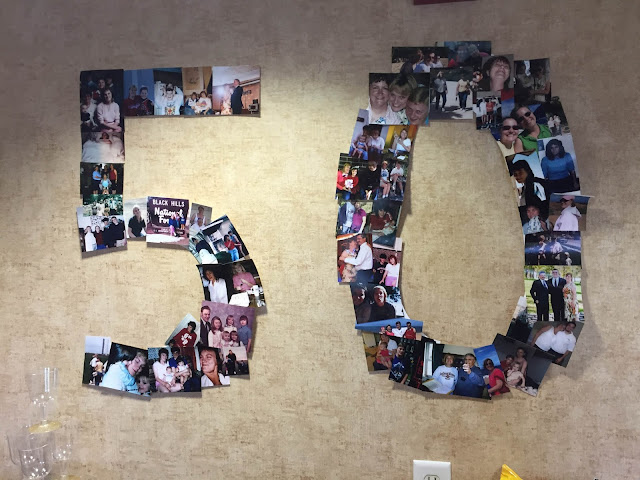 This project was rather easy. It's a 50 cut out from poster board with prints taped to it. I had to scan and hunt down pictures, which actually, was pretty fun. Once I reprinted a bunch of pictures, I just had to tape and trim the pictures to the 50 I cut out. 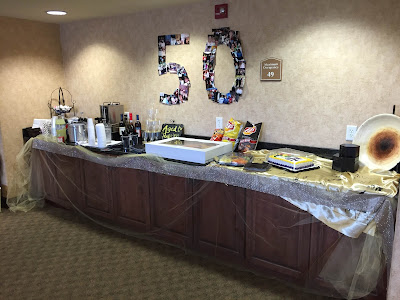 The front of the food area was just a couple of yards of gold tulle and a crystal ribbon along the front. I secured everything with some tape and safety pins. 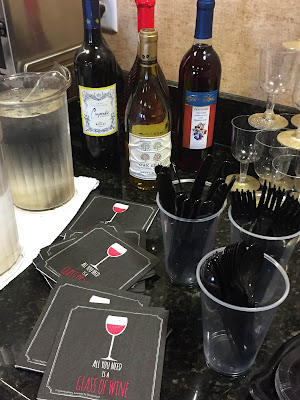 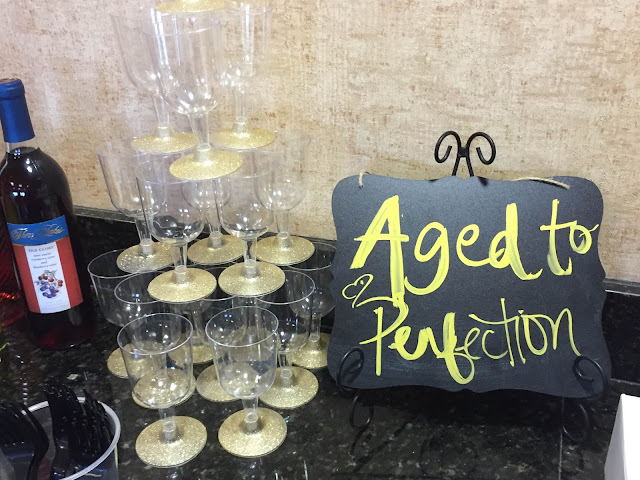 If you know anything about me, I love chalkboards. I found a gold chalk board marker to use. It wasn't all that gold though. It seemed very yellow when I first used it. It did turn more gold as it dried. One thing that irritates me to no end is that I didn't take the time to draw nicely on the boards. My mom was almost there so I just wrote something really quick. Oh well.

The wine glasses were a really fun easy project. The bases disconnect from the top part. I took glitter blast and clear spray to the bases to make a sparkly wine glass that was a bit more fancy than the normal disposable wine glasses. 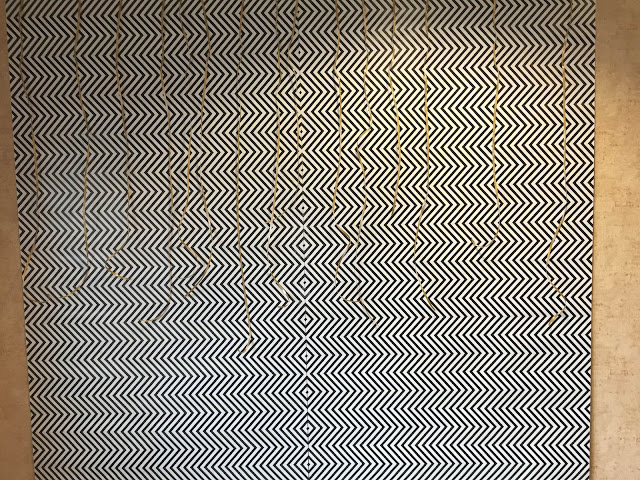 Our photo booth was pretty simple. I bought a role of black reversible wrapping paper and taped it to the wall. We added some gold ribbon to the top. Does this make you a bit dizzy? 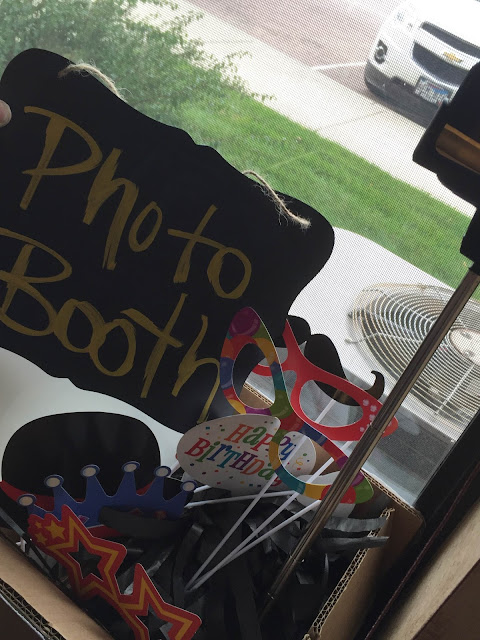 I bought a package of props from my local party store. I also made a set of "50" glasses since they didn't have any at the store. To take the pictures, we had a selfie stick on hand. I was going to grab my tripod, fancy camera and remote, but honestly the selfie stick worked just as well. 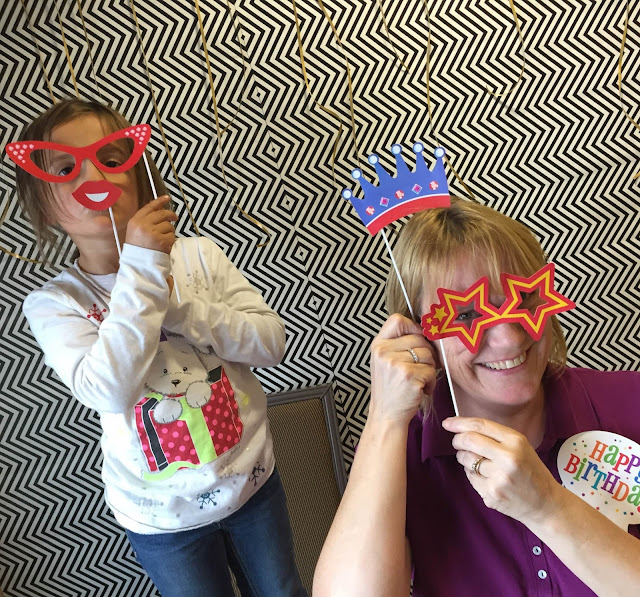 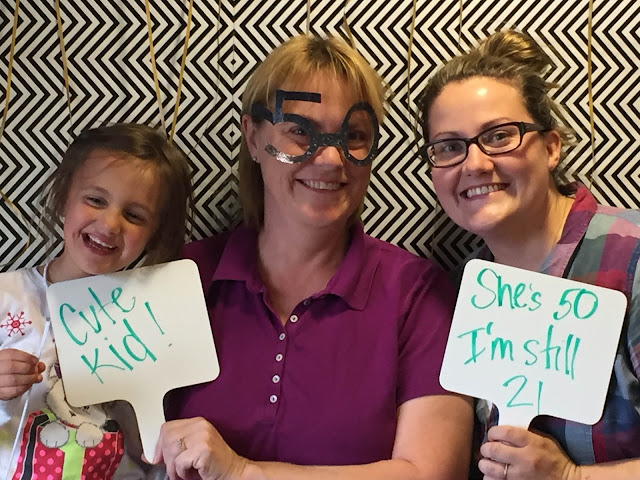 These dollar store white boards ended up being a pretty big hit. They are in the kids education section. 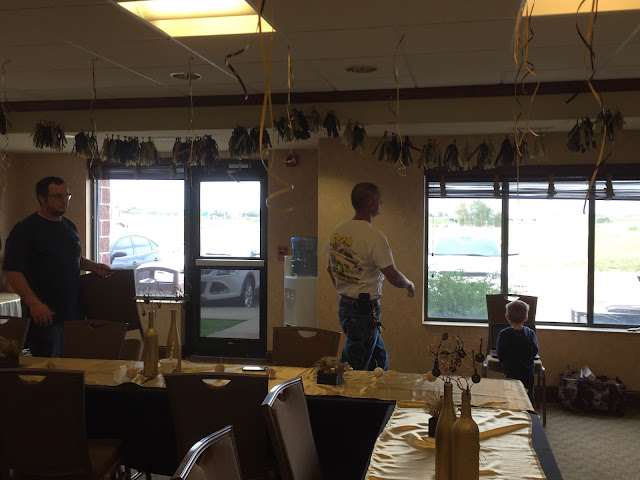 One last touch was tissue paper garland. I made it over a couple of nights watching tv, and it ended up being a fun little addition to one side of the room. 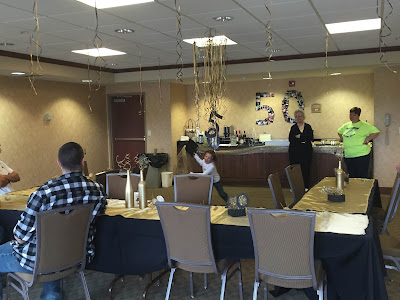 I also hung random bundles of curling ribbon from the ceiling using paper clips as anchors. 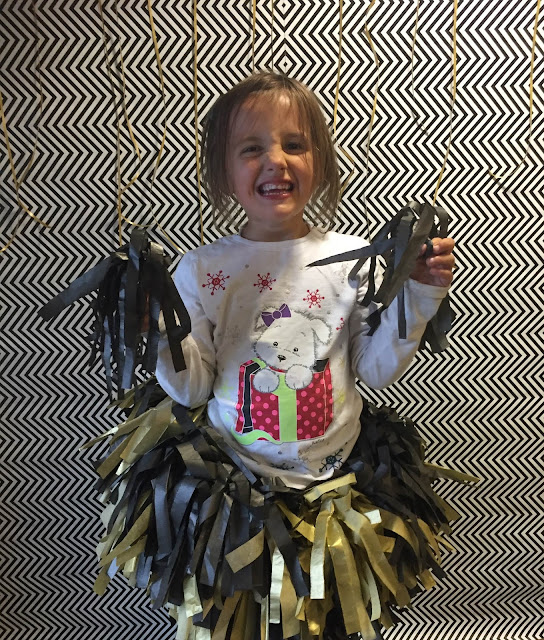 The tissue paper garland also made one great tutu for a very excited five year old!