I have finally decided what to name our trailer. I put the question out to my readers on my Facebook page and got tons of great ideas. I liked Ethel, Blue Betty, and many of the others. But after brainstorming about it and changing my mind 100 times, I decided to pick something completely different. The 63 Rambler is now officially named Myrtle.

Myrtle. You probably are thinking...what in the heck? Well there's a story behind that name. My grandmother's name was Myrtle. My husband and I have always thought that a child's middle name should mean something. My daughter is named after his great aunt and mother. My son is named after my grandfather and my husband's grandfather. When we were pregnant with my daughter, my grandmother told my mom that under NO circumstances was she to allowed to let me name a child after her. My grandmother didn't like her name, and she didn't want to pass it along to her great-grandchildren. I haven't considered her name for my children because of this request (she didn't have a middle name I could use instead).

However, for a cool retro travel trailer, I think Myrtle will do just fine. In fact, as you can imagine, she was often associated with "Myrtle Turtle." I think that almost makes sense as well since the trailer is like a little turtle with it's aluminium shell. I thought about using green in the color scheme, but I think I'll stick with red as my accent color.

So, right now I have done some work to add personality into the trailer. Keeping in mind I tried to keep the changes to a minimum, since I'll be doing a more full restoration this fall. (Window restoration, new seals and refinishing the interior walls) 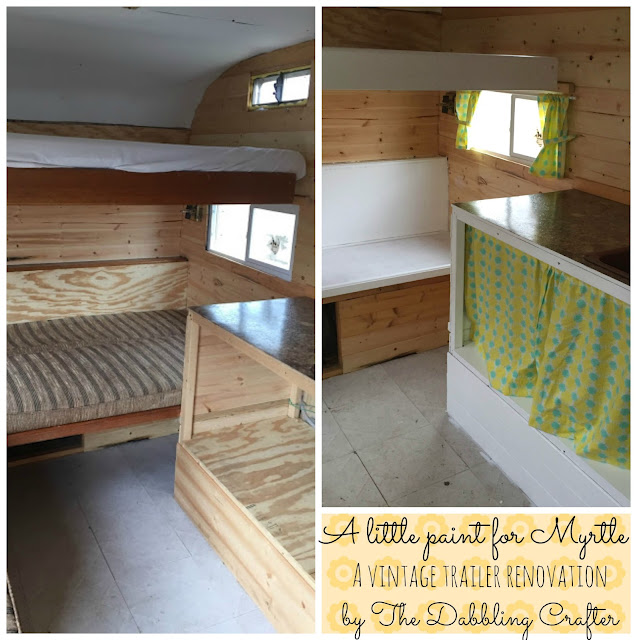 The first thing I did was pull out all the cushions. I thought I might reuse them but it was pretty clear these were the original cushions, and they were pretty darn gross. I decided it was worth the cost of new foam and fabric not to have to sleep on a cess pool of other people's bodily fluids. (Yeah...I took it there) I have a cost saving idea for new foam, which I'll share once we get to that step. After pulling all the cushions out, I disinfected everything so we had a nice clean start.

After all those housekeeping items, it was time to paint. I primed everything that was original to the trailer. I know, I know. There has to be some vintage trailer purest out there that is shaking his/her fists at me. The problem was there was only a few original items that remained. Those few items didn't match the new pine tongue and groove. I decided one of the two needed to get painted, and I decided not to paint the tongue and groove because 1) there is a ton of it, 2) it's unfinished and 3) would use gallons of paint.

I used a new primer for this project..the high end Valspar Primer (meant for glossy surfaces). The original birch has a very shiny finish. I didn't sand the surface, so I really hope that the primer does what it claims to do. I did two coats of primer and three/four coats of Olympic One in a custom bright white mix. The original birch was interesting because a yellow-ish hue kept showing through the paint. After the six coats of paint, I decided I would live with the little yellow coming through.

As a reminder, here's what she looked like before I started my work... 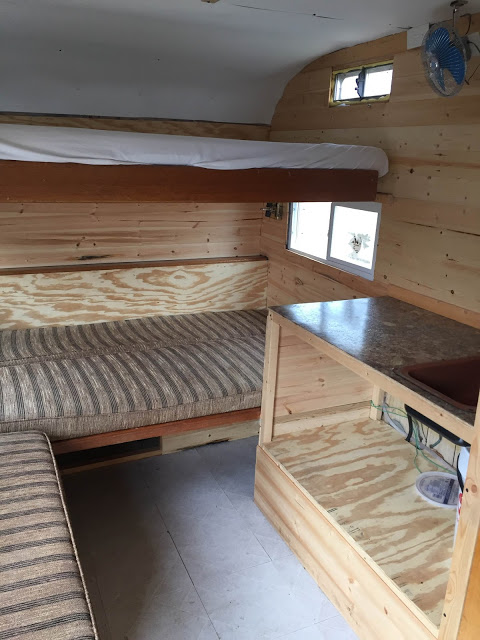 And here she is after bit of paint... 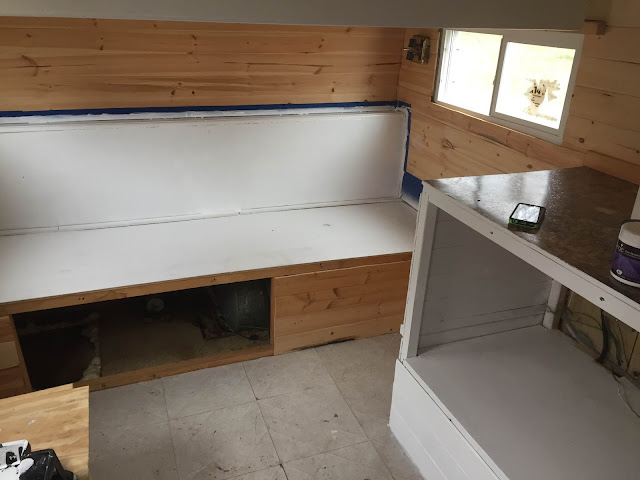 So, she's starting to look a bit brighter. Now it was time to add in some color. I took the scratched up old knobs and gave them a new life with some Valspar spray paint in Nautical. 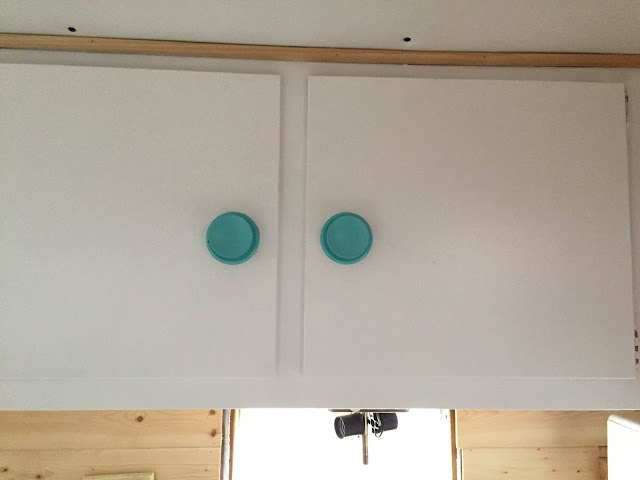 My final update is adding curtains. I search and searched for fabric to fit into my color scheme (Aqua, Yellow and Red(?)). I finally found a Moda fabric that was a bit vintage and a bit modern. I made curtains for each of the windows and under the sink. The final step was making straps for each curtain and curtain rods out of wooden dowels. I really love how they look in the trailer. 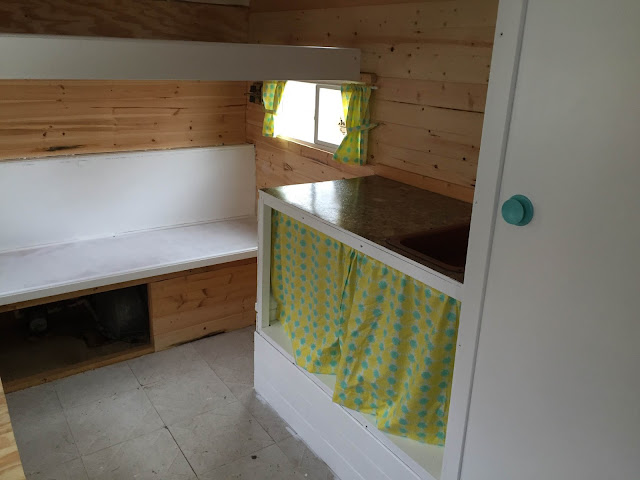 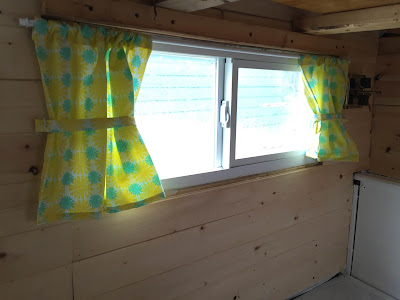 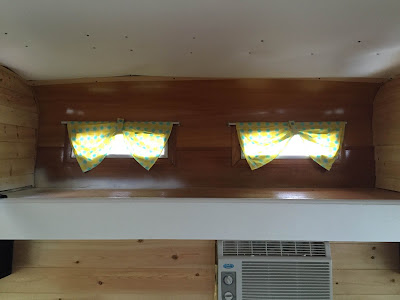 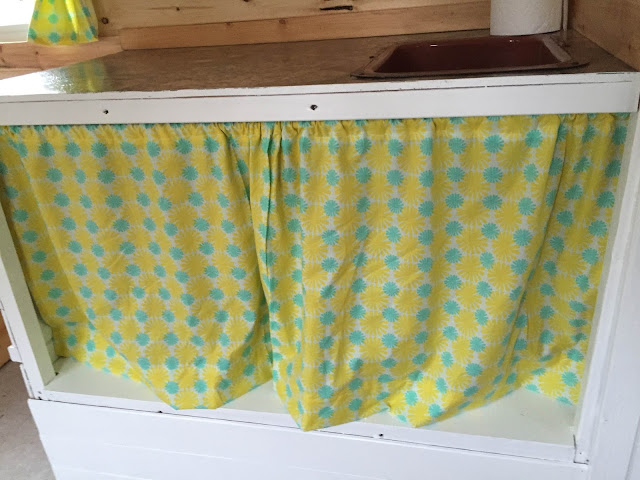 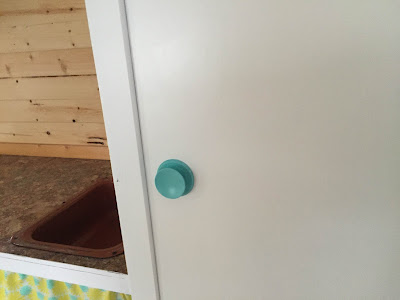 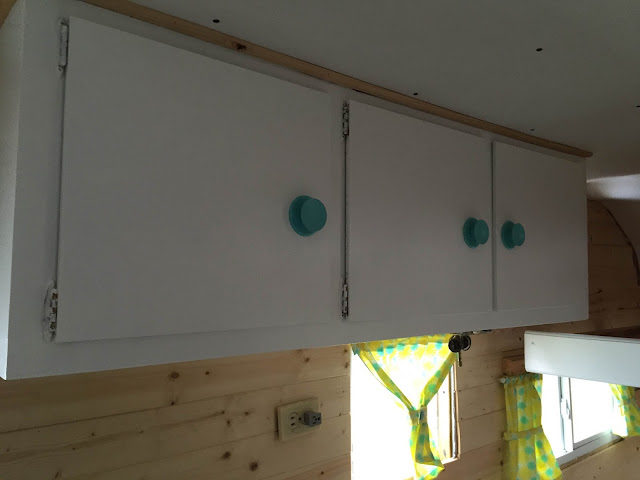 Our next steps involves new foam, new upholstery and new flooring. Then it just might be time to take Myrtle on the road.