Why NOT to go to Disney World: My Honest Review

It may seem a bit crazy or hypocritical to write a post about why not to go to Disney right after our trip to Disney World.

I went to Disney twice as a kid. I loved those trips. I have fond memories of those vacations, and I was eager to share more memories with my own children.

I did have fun with our children, and we did make fantastic memories. I am grateful we had the opportunity to take our children. However, after our trip, I'm not so sure if I would chose to go again, and here's my honest review why. (Click here for DIY Disney World Projects and other tips and tricks for your vacation) 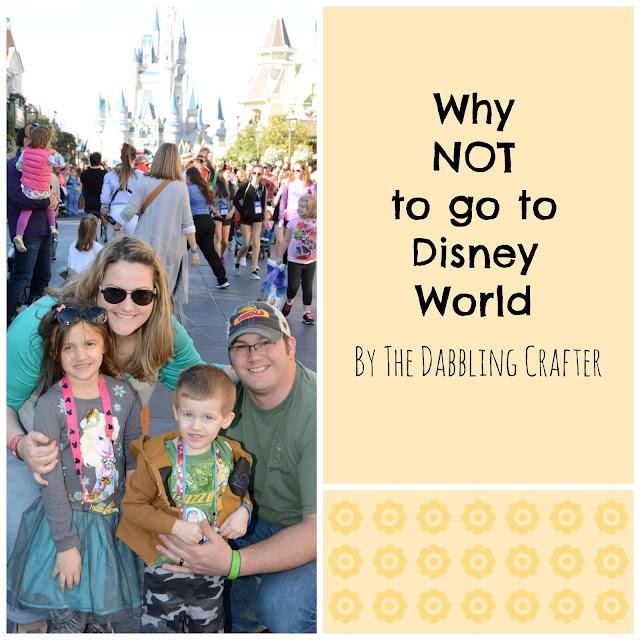 Most vacation destinations are expensive. No one will be surprised to hear that a Disney vacation is one of them. What I found a bit shocking was the lack of bang for your buck.

So, you spend approximately $400.00 to take a family of four to Magic Kingdom for one day. That doesn't include food or hotel. We went during a non-peak time. Most rides had a 40 to 90 minute wait. You get three fast passes to use. So, unless you get to the park at rope drop or stay late (both not great options with young children), you may ride 5 or so rides. That's almost $80.00 a ride. A ride that you waited an hour to get on and only took 5 minutes to do. Ouch.

Those rides aren't exactly the most exciting rides either. As an adult (and after visiting Universal Studios last year), the rides seem pretty dated. Our children didn't want to visit the thrill rides (which are also fairly old apart from the seven dwarfs ride). 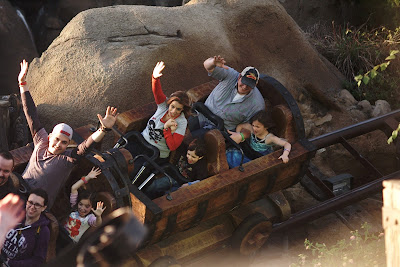 Our daughter very much not enjoying the new Seven Dwarfs roller coaster.

Now to be fair, my children thought they were all pretty cool since we don't do amusement parks often. I know there's a delicate line of keeping classic rides and adding new rides. However, I found some of the new rides (Pan, Pooh and the Little Mermaid) were pretty boring. Lots of animatronics with black lights. Little Mermaid broke down a few times as well as the Buzz Lightyear ride. Toy Story Midway Mania was a blast, but it was the only ride that had the same technology that Universal uses almost exclusively. The wait on that ride was around 2 hours without a Fastpass+. I noticed that Universal studios often uses a mixture of 3D technology with a roller coaster like experience so you feel like you're actually inside the movie. I wish Disney would catch up with the times and use the same technology.

I know there's many people out there that are going to think that I'm crazy for saying that the customer service wasn't good at Disney. They, after all, have rules like the "No Sad Kids Rule." However, I had two particularly bad experiences with my time at Disney and nothing came of talking to their customer service team about it.

First of all, I got food poisoning. We ate at our hotel (Pop Century) the last night we were there, and like clock work 3 to 4 hours later, I was very sick. Not only does being sick simply suck, but I'm also pregnant. So, I spent the entire morning feeling terrible and then had to get on a plane for 3 hours and in a car for 4 hours. It was a LONG day. I'm glad that we didn't get the dining package because I would have been terrified to eat at the same restaurant after that experience, not to mention that I would have been freaked out to eat at any quick service restaurant after that.

The second experience really got my feathers ruffled. I decided before we went to Disney, we would purchase the Memory Maker package. The main goal of getting the package was to get the pictures of the character interactions, because I knew I'd be busy handling the kids and autograph books. The pictures with the characters aren't anything particularly special, but at least I got the pictures.

Until we went to see Anna and Elsa. Yes. The two characters my daughter was so excited to see didn't have functional cameras. Now the real pain, what really makes me angry, is they didn't realize that the cameras weren't working. So, I didn't take my own pictures. Stupid, I know. But, I trusted since every other time the cameras worked, they would that time. This is our picture with Elsa. 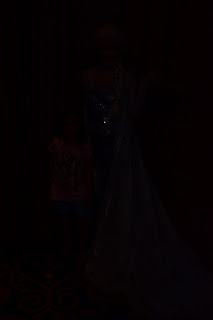 Really great huh? When I contacted customer service, I was basically told, too bad, too sad. So, in what world would anyone ever purchase Memory Maker in advance when it's possible the pictures won't even turn out? I won't be doing it in the future for this simple reason. When you purchase a service, you expect that service to work. If the service doesn't work, which I understands happens sometimes, there seems like there should be some sort of response other than "Well darn, that happens some times." Avoid Memory Maker and purchase the pictures after the fact if you want them.

Can we also take a minute to say that many cast members were down right grumpy? I can think of maybe 2 or 3 that actually seemed to like their jobs...and they included the Jungle Cruise captain, a security guard one day we went into Magic Kingdom and....well that's really the only people that left a lasting impression.

I think my expectations on character interactions was probably too high. Maybe I remember the days when you'd run into a character at Disney and they would take some time to have fun. I remember when I went on my first trip, Chip and Dale stole my autograph book. My brother and I had a good laugh at the entire thing. Goofy and Pluto did dance with our kids, but other than that it was pretty clear that the goal was to get as many people in front of the characters as possible. The children were practically pushed out after their picture. The picture that may or may not turn out.

I do have to say the story time with Belle was one exception. That experience really is exceptional. My daughter loved the fact she could be part of the story. And I couldn't help but laugh at my son being a little salt shaker. I would say of all the experiences at Disney, that one was the one that lived up to the Disney magic I have heard so much about. 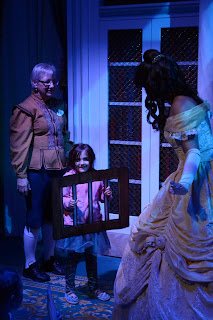 On the flip side, we did the Disney Junior character meal at Hollywood and Vine. I have a feeling our experience is probably on par with most character meals. The food was marginal, the kids got maybe a minute with the characters and it was our most expensive meal. Plus, no photographers for your Memory Maker that may or may not work.

So, if you decide to go to Disney this is what I would suggest:

1. Don't do the Disney Dining Plan. Now, I know if you have two hungry teenage boys, the plan might make sense for you. However, we did the math and to get our money's worth our five year old would have had to start eating like a NFL linebacker. We decided to spend our money on ordering groceries and one nice meal (our character meal). That being said, we only spent approximately $400.00 on dining for the 5 days we were there (plus $50.00 on groceries).

2. Make Fastpass+ reservations early in the morning. Once you use up your Fastpasses, you can get more. Really they are the only way you're going to get do some of the rides. During our 2 1/2 day visit, I didn't see the wait for Peter Pan go down to below 60 minutes. That's a long wait in a boring queue for a short ride. Even the Jungle Cruise was 60 minutes or more most of the time. And that ride has been around since my parents were diapers.

3. Plan out important character interactions. If you're kids are into character experiences, make sure you plan out which ones are the "must see" ones. We knew that Anna & Elsa and Mickey were the most important so we had Fastpasses for those. Lines often go down for Mickey during parades, so keep that in mind. And think about the time you're going to spend waiting v. how much time you get with the character. 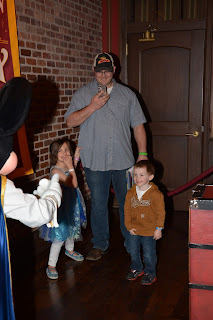 That's one kid that is excited to meet Mickey.


4. Think twice about Memory Maker. My son doesn't like pictures. I didn't think of this when I bought my package. He rarely would look at the camera. I could have easily gotten the pictures taken without Memory Maker and just purchased the ones he was actually looking in. Plus, as I stated above, you never know if the pictures will actually work. So, you need to take your own back ups anyways. 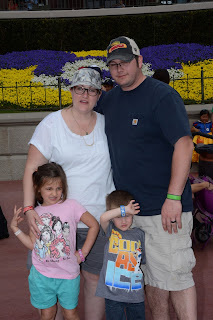 Isn't this one flattering photo?!? Yikes.

5. Think twice about character meals. At our meal we got maybe a minute with each character. The food was okay. We had to wait almost a half hour for our reservation and since we didn't get seated quickly, the characters left before we were done with our meal. It cost our family of four (with a 5 and 3 year old) almost $200.00. Really, that's pretty crazy. I don't think we'd bother with a character meal in the future simply because there is nothing special about the interaction. We could have gotten more time with the characters if we had found them "in the wild."

Over-all, we did have fun and I don't want to be a complete downer. It was a family vacation we'll remember forever. I just think we'll do something else for our next family vacation (an all-inclusive resort sounds pretty amazing).