Our kids each have tablets they get to use sparingly. In fact, I refuse to charge them, so they are dead about 90% of the time. I *might* take a little pleasure in saying "It's not my responsibility" every time they complain they aren't charged. I thought the You Tube Kids app would be full of interesting educational content. Uh no. It's full of strange videos of people opening toys up. (Why?!?!?) I deleted the app after a torturous week of hearing people opening surprise whatevers. I downloaded Epic instead. (Great app..requires a small monthly subscription but it's totally worth it FYI)

During the You Tube week, my daughter saw a craft video of someone making a Barbie clothes closet out of a shoebox. She asked if we could make one together, and I decided that was certainly a better idea than the other junk on there. When we were at a local general store, we saw a box on clearance and snatched it up. 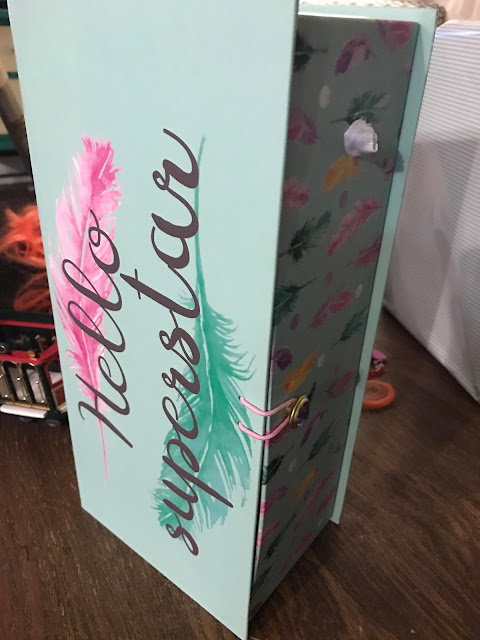 So, let's get one thing straight. Do I honestly think my daughter will suddenly start hanging all her doll clothes neatly on the mini hangers and organize all her shoes by color? HA! HAHAHAHA. No way. It will never happen. I will continue to pull tiny shoes out of my baby's grasp and step on them in the middle of the night.

However, that isn't the point of this project. What is the point you ask? Why would I help create a tiny closet that's more organized and pretty than my own sad miserable closet? The act of making something. Would I have picked this particular project myself...probably not. However, I love when my daughter asks to make something rather than go out and purchase it. I love sitting in my office/craft room and brainstorming how we're going to take her big idea and use what we already have in the house. At this point I have to help to some degree. The hot glue gun is a bit scary in her hands, but she is perfectly capable of gathering supplies, cutting and placing items. (In fact my son insisted on creating his own version from a box we had sitting around. He uses it to hide things I need on a daily basis)

We had to make some modifications from what we saw in the video to match what we already had on hand. The closet rod is a pencil that we pushed through the cardboard and then cut off the sharp end (hot glued to keep it from moving). The shelf is a simple piece of cardboard with scrap paper glued to it (with a glue stick...all her doing) then secured with some hot glue. 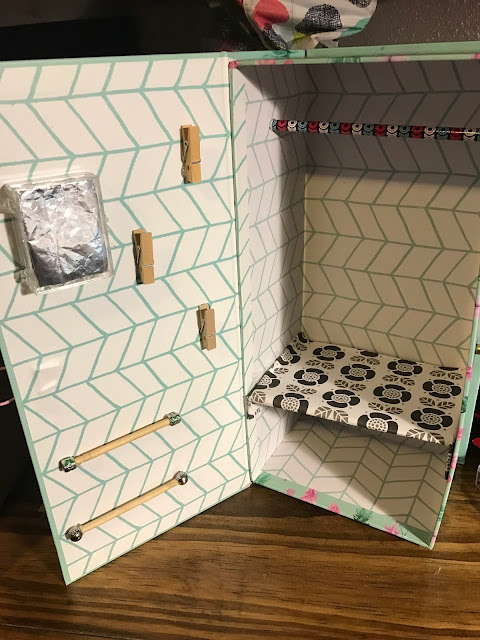 Once we had the rod and shelf done, my daughter wanted to add some items to the door. She came up with the mirror idea with a random box we had sitting around and aluminum foil. We used some left over clothes pins to make hooks. The final touch was four beads, a cut up chop stick (yes...I keep chopsticks for projects) and hot glue for a shoe shelf. 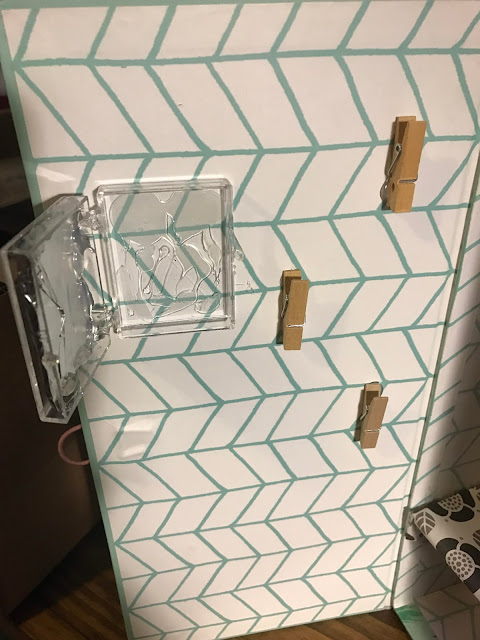 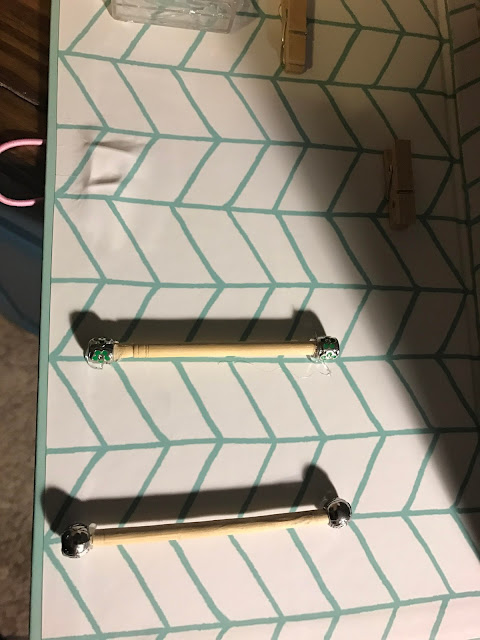 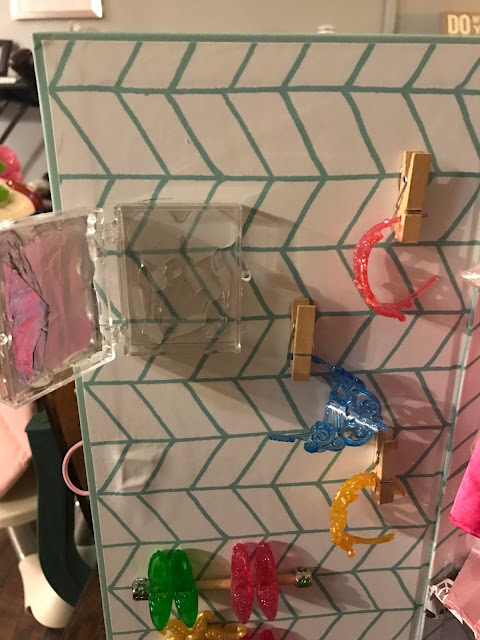 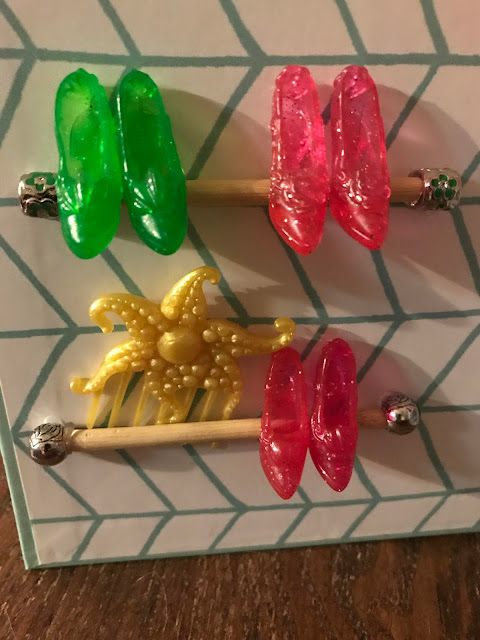 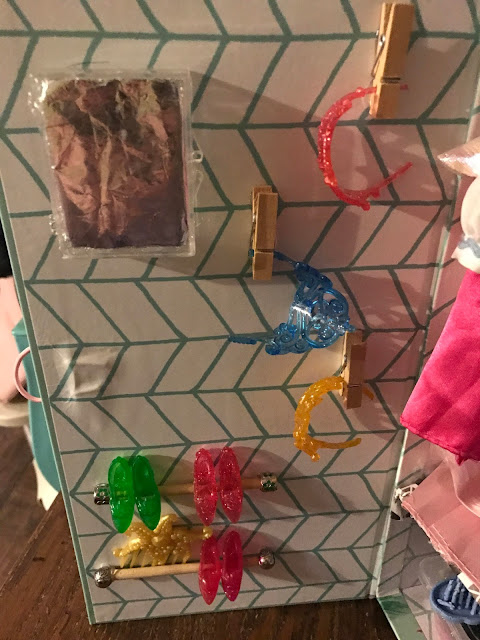 After all that work, my daughter asked if we could make hangers. I wasn't really sure where to start, but Pinterest showed me that it was pretty easy to make some hangers out of paperclips. I used a pair of pliers and made a dozen or so in a few minutes. My daughter hunting down baby food containers, cleaned them out and used them for shoes and other accessories. 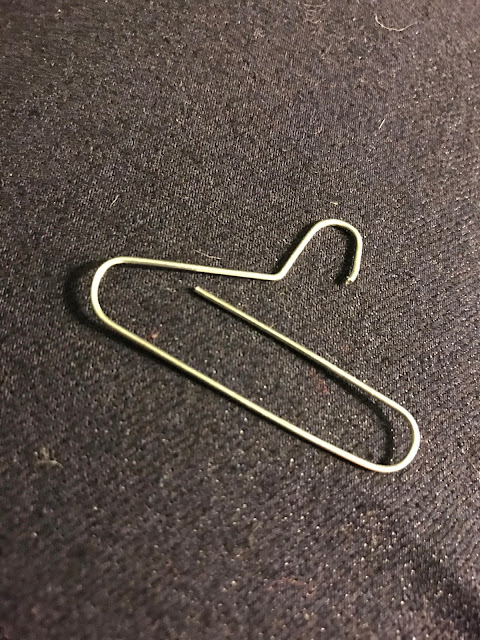 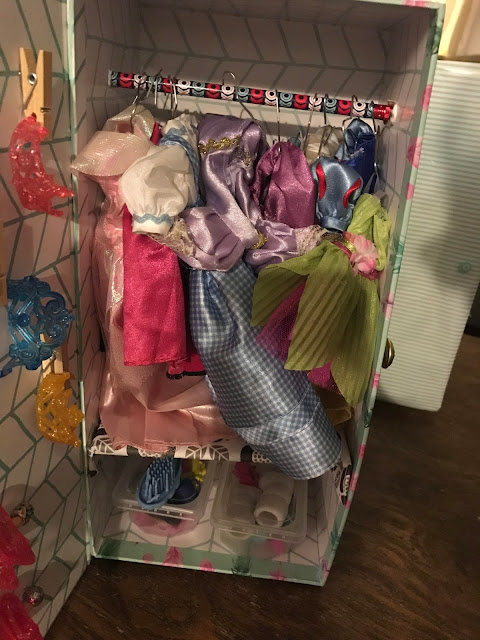 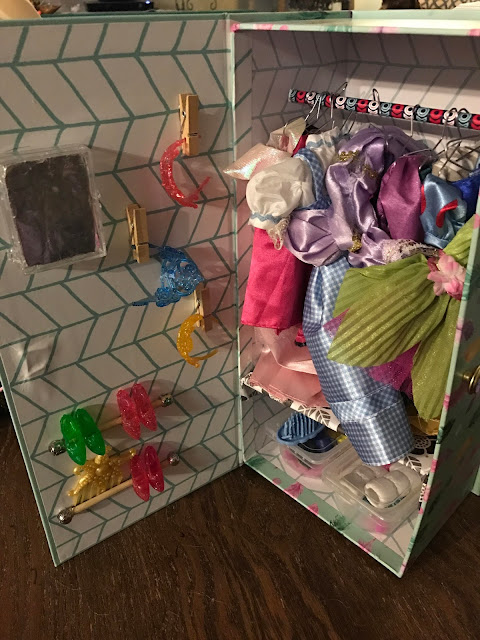 All in all, it was fun way to spend an afternoon together. She always tells me way more when we're working on projects like this ("OMG...a boy and girl almost kissed under the slide Mom!"). I hope that trend continues into her teen years. Hey...a mom can wish, right?

The blog has been a bit slow due to the new baby and winter months, but I can promise that is going to change in the very near future. I have a HUGE to do list once the weather decides to stay above 50 for more than 12 hours. So, keep an eye out! Until then, check out my social media for pictures of projects, dogs and cute kids.