Hello There,
Well, it's not Wednesday but I'll be home tomorrow and won't be able to post. Welcome to a HUGE POST especially since I'll be talking about the Bridal Shower over several weeks. Those of you who know me know I have been working on this bridal shower for a year. Yes, an entire flipping year. Was it worth it? To be honest, probably not considering the amount of time and money ratio, but it doesn't matter if it's worth it to me! That's not the point of putting on a shower. The bride and guests are the ones that are suppose to enjoy it!

Many MANY elements of the shower are DIY. I'll first start with a general explanation of the shower. I was going for an elegant yet relaxed theme. I chose the Museum of Visual Materials in Sioux Falls for the local. Not only do they have an beautiful building, they also have an extremely nice kitchen for you to use and are extremely affordable for the beauty of the building. 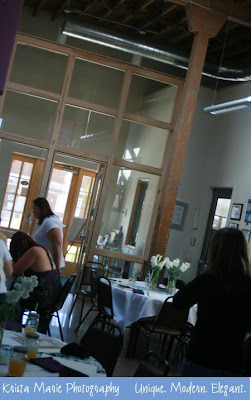 Building on this "elegant" theme, I decided to dress the tables. So, instead of just doing just tableclothes, I created a place setting for each seat. Each place setting was cost-effective while still (trying) to be elegant and classy. This post will surround the tables I created. 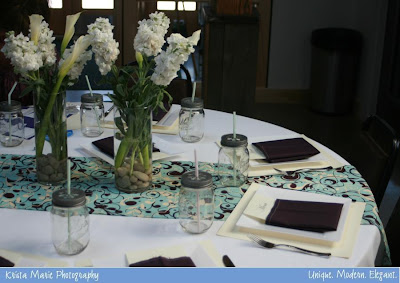 First of all, I started out with a DIY table runner. I bought the fabric from Hobby Lobby (a LOT of fabric) and cut each runner with a rotary cutter (a quilters best friend) and clear ruler. The runner pattern was a lovely purple, ivory and aqua color combination. The rest of the colors of the shower played around this idea. I created a pattern in my head using the measurements of the tables.

I have several vases left over from my own wedding. We are using the heck out of these vases. They have appeared I believe at 3 or 4 other weddings and 2 or 3 other parties. I used these vases on the table with river rock I purchased from Hobby Lobby for this shower exclusively. The flowers were purchased the day of the shower in bouquets and separated among the vases. The flowers were quite fragrant, but not too bad so they overwhelmed the meal. I hope. :) 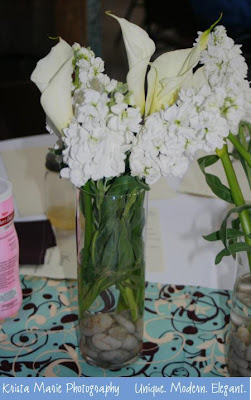 Second, I marked the individual place setting with a little trick I picked up on Hostess with the Mostess....scrapbook paper instead of a traditional charger. It's more cost effective, and I'm not stuck with tons of chargers. Next, I added the plate. Not just any ordinary plastic plate but a square heavy-duty plate. I wanted the plate to look and feel like a real plate, but not have the same cost and clean-up issues. I feel like this picture doesn't quite capture the place setting, but it works. 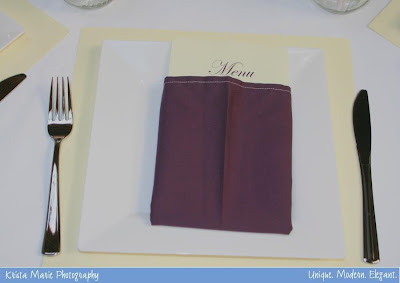 After the plates, came the napkins and menus. The napkins were DIY from purple light cotton fabric from Hobby Lobby. They were also cut with the rotary cutter and sewn together by my very helpful mother. :)

The menus were also DIY. I printed them with dark purple ink, using fonts from the invites (talked about in this post) on resume ivory paper. They were then cut with a straight cutter and the corners were rounded with the rounding hole punch. The menu with recipes will be featured on a different post a different day. :) 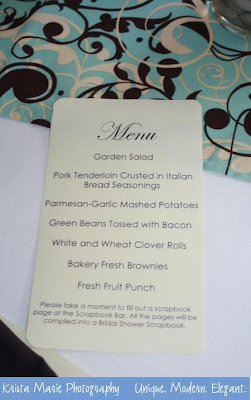 To finish the place settings off, I had silver-colored plastic silverware. They look and feel like actual silverware. Once again, more cost-effective yet still within the theme.

Instead of plain glasses, I took another hint from Hostess with the Mostess and used mason jars. Instead of plain mason jars, I ordered lids with this daisy cut pattern. I then slipped straws into the hole in the center. Fun but still functional. 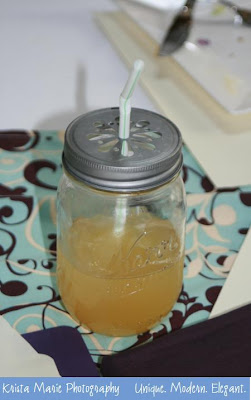 Next week, I'll be discussing the "games" I had at the shower. The latest trend in bridal showers is to avoid the traditional, sometimes cheesy, bridal shower games. I took a more passive approach to getting guests involved. There was a mixed response to it since it's not traditional in the midwest to forgo games.