Hello There,
I posted a couple of weeks ago about my project ADD. I had decided to paint my craft room and it had taken it while to actually finish the project. I'm happy to say that the painting portion is done! I still have some plans for those shelves that hang over as well as that window that we have insulation in right now. (So, it's not completely done yet!)
I had thought about using a green floral fabric as my inspiration. I decided I couldn't do that because I love color too much. I try to tone it down around the house, but I can't tone it down in the one room that is really mine.
The inspiration for my craft room was Amy Butler's Love Periwinkle Paradise Garden print. 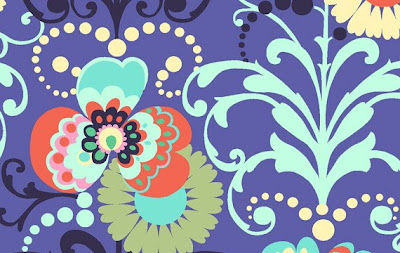 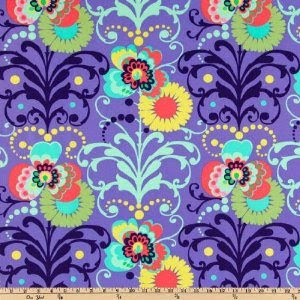 Color is more correct in the first picture, but you get the idea of the print in the second
Craft Room "Before" 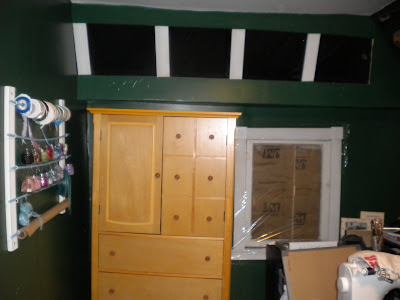 Green walls and a loud armoire..not so pretty
Craft Room After 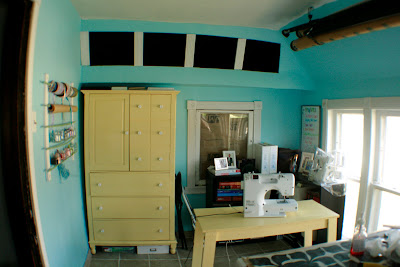 New blue walls and yellow armoire...desk is now yellow too. 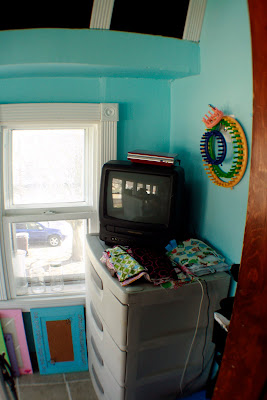 Opposite corner....just brought a tv into the room. Makes sewing go faster. 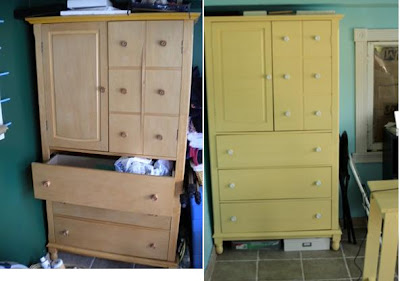 Just a little information about my painting experience. 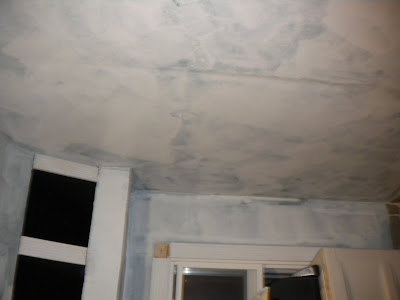 Walls with their first coat of primer

To cover the dark green, I did two coats with a primer. The paint experts at my local Ace Hardware said I'd probably be good with just one coat, but it was pretty clear that the green was going to show through without two.

I went for the more expensive Kilz in a hope it would help cover. I didn't see much difference between the least expensive Kilz and this mid-level Kilz 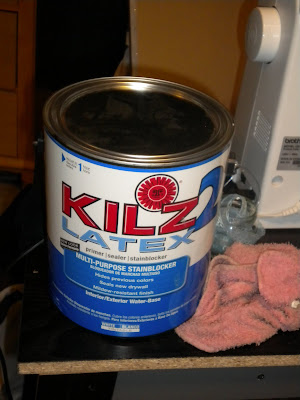 I decided to try the very expensive ($50 a gallon!?!?) Benjamin Moore Aura paint to see if it would cover better and thus be around the same price as two gallons of the cheap stuff.
Well, it definately covered better than Dutch Boy & Walmart's Colorplace. Hands down. Not only did it go on thicker and prevent color from showing through, but it also seems to go further. It spreads out and creates a nice smooth finish. The coverage was about the same as the Kilz paint I've used before, but the smooth finish is better with the Benjamin Moore Aura.
I should note that the armoire was painted with Benjamin Moore's lowest price point paint "Ben." The coverage seemed to be the same; however, the finish wasn't as smooth. I think that the "Ben" would have worked for what I needed...however it's not low VOC either..which was nice. I liked the fact the Aura didn't stink up the house and is better for the environment.
All in all I had to do two coats of primer and two coats of paint.
The color is "Crystal River." That isn't a Benjamin Moore color (I found their colors to be a bit fuddy duddy). It's an Ace Hardware color I had tinted with the Benjamin Moore Aura paint.
The armoire is in "Golden Honey" which is a Benjamin Moore color. 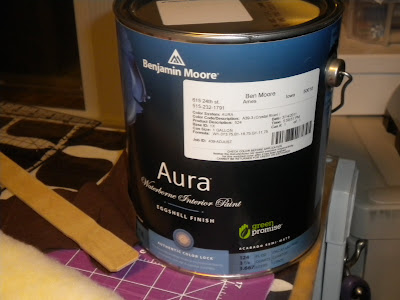 I sprung for Benjamin Moore's expensive Aura paint hoping to save myself some time painting. 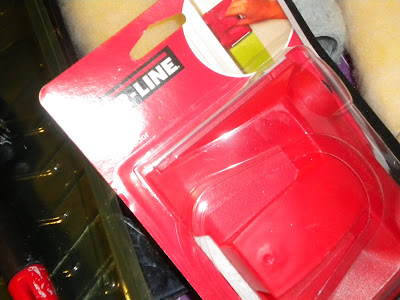 I used the heck out of these cheap edging paint pads.
The process I used was new for me, but probably isn't for your paint pros. I didn't bother to tape. I used a drop cloth. I "cut" in along the edges with the paint pad (it actually did a really good job keeping paint off the trim and making a straight line) then used a roller on the wall, keeping a wet edge as I went. This process worked really well and I would definately do it again.
To paint the armoire and the desk, I first sanded everything. Both were that fake wood/mdf junk you find with cheaper furniture. Since the black desk was so far from the yellow, I also used some spray primer I had sitting around. Both used three coats of the "Ben" paint. I used a "smooth" finish roller and paint brush. The knobs on the armoire were spray painted white. I think I'm going to eventually change them out, but that worked for now. Both the desk and armoire got a coat of clear glossy spray paint over the top of the paint to keep it durable.
Hope that helps someone who is thinking about painting!