Hi There!
This project was really exciting. I've been a bit obsessed with solar mason jars since I saw a feature about different solar yard decorations. I knew there must be a way to do it on the cheap. I mean, I found the jars online for $15.00 and above.
Here's how to make the jars for about $2.00 a piece.
Click here for the PDF printable tutorial.
Outdoor Solar Jars 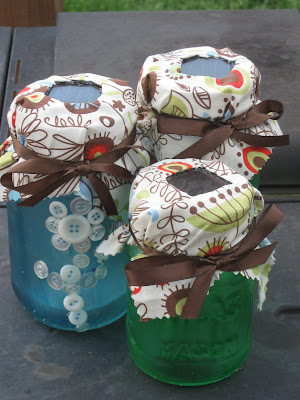 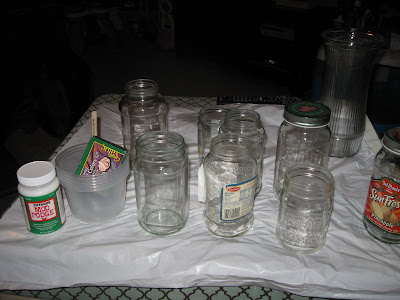 Total for Project: Around $2.00
Directions:
Step One: Decorate the Jars
I used this tutorial from Gingerbread Snowflakes to color the jars. Basically, you mix Outdoor Mod Podge and food coloring together and paint it on to the jars. Something I noticed is Mod Podge doesn’t cure very quickly especially if it’s humid in your area. To speed up the process, a coat of clear spray paint will do the trick.
I also tried to use buttons to dress up one of the jars. I’m not sure if I’m a fan of the look, but it’s an option if you want to do more. You could also add something sparkly on the bottom of the jar to cause more reflection. 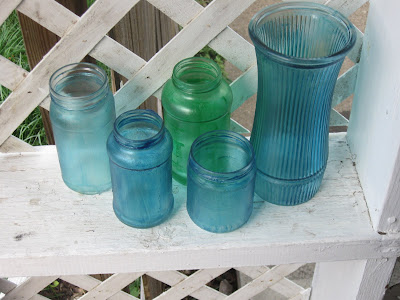 Jars all painted and ready to go!
Step Two: Cut the Bowl
FYI: You have a couple of options. You could get the larger, more expensive solar light and glue it to the top of the jar. (You’d want the kind with a lip that comes out). The only problem with this is you’d have to find the right kind of jar that would be small enough to fit under the lip but big enough to accommodate the light. I wanted different types of jars, so I decided to use the smaller solar light. (That’s basically a long paragraph to justify using the cheaper light!)
I decided to use the smaller much cheaper 1$ solar lights. Since they are so small, you have to use something to attach them to the jar. I looked around my house for a while to find something that would do the job.
Finally I spotted some plastic bowls I had gotten from my aunt. They were used for ice cream at her gas station. I imagine that a plastic cup would also do the trick as well.
I first cut a hole in the bottom of the bowl big enough for the solar light to firmly fit in. Next, I cut off the excess bowl from the top, so when the solar light is placed in the jar, the plastic bowl touches the jar, but doesn’t peek up over the top of the jar. 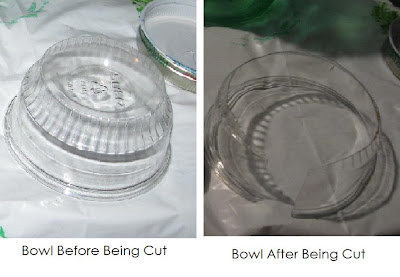 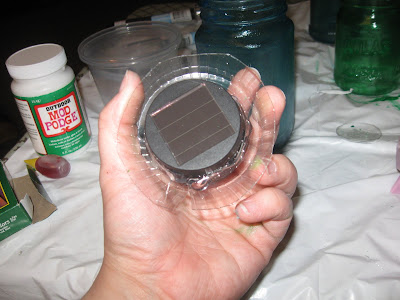 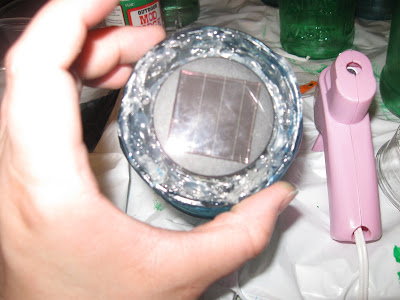 Plastic Attached to the Sides of the Jar: Top View 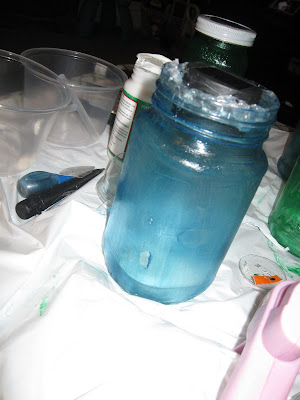 Side View…Not so pretty yet..but it will be! See that smudge on the side. That’s what you get when you don’t spray the clear coat first!
Step Four: Attach Fabric Top
Since the jars don’t look so pretty right now, we need to make them look better. Cut a square of fabric. I’d recommend using an “outdoor” fabric to prevent mildew; however, I personally just used a cotton fabric. I figured the fabric will dry out in the sun. If need be I can replace the fabric later on.
I used pinking shears to prevent a ton of fraying. Flip the square of fabric over and use a pen to trace the solar light part. I originally cut a circle in the fabric. To be honest, it looks much better to cut a square in the fabric and match the square to the square solar panel. 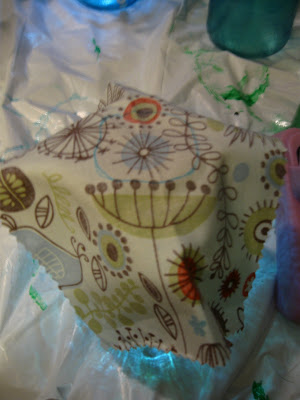 Originally I cut a circle, but I’d recommend a square instead.
Next, you will want to attach the fabric with hot glue right around the solar panel. This really is the trickiest part of the entire project. It can be difficult to fold down the fabric and glue it at the same time and keep the fabric from bubbling funny. 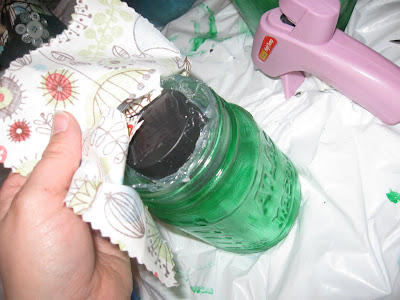 Attempting to glue down the fabric.
Step Five: Attach the Ribbon
This step is simple. Make a bow with your ribbon. To make sure the bow stays, use the hot glue gun to secure the loops.
You’re done! 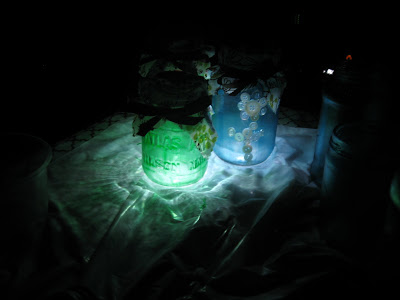 those are so cool!

This is really cool and I'm so glad your project was featured on Mod Podge Rocks.

Thank you! I didn't even know it was on the Mod Podge Rocks website until you told me, so thanks for letting me know!

Do you have to color the glass? Or can you leave them clear and get the same effect? I want to try and make these. Keep the awesome projects coming :)

Absolutely! I did a bunch and did one without color and it looks just fine. If you do that, you could also skip the fabric on the top and do a larger solar light.

Love this idea!! Have to start collecting glass jars today! Thanks for sharing!

What kind of solar lights did you use? Where can I find them? I want to make some of these! This is an awesome project!