You Really Can Fix Anything With Google

I am quite sad to announce a few nights ago my computer died a rather sudden death. One minute I was enjoying some Dexter while using my new favorite website Pinterest and the next it's frozen, restarted and giving me a random error. I spent an entire night Googling and removing the back off the computer (I tried the old Nintendo trick of just blowing...which was actually recommended by one of the websites) No dice. I might try a couple more things, but it looks like the hard drive doesn't even exist when I try to recover. On a side note, it honestly feels like I'm opening nuclear launch codes when I cut open the plastic to open the recovery disk for the first time.

Since we just bought some new tires for our impossible to find rim size, we won't be replacing it for a while. I had thought about getting an Ipad to replace the lap top since I'm not doing a whole lot of word processing nowadays, but I've decided that the inability to multi task would drive me insane.

I digress. Back to the moral of the story. Armed with Google and my purple tool kit, I usually get s**t done. This week it was a rather tricky screen for a storm door. Last fall my in-laws, my husband and I couldn't figure out how to get the glass in nor the screen back in. I asked my husband to do it, but with him working 70 plus hours a week and me now staying home, I better do it myself.

So, I tried to find the manufacturer of the door. Nothing on the door indicating what it was. So I just Googled glass front storm doors plus "difficult to change screen" and my exact door came right up! (I imagine there are hundreds of people around the United States cursing this stupid door)

After watching a little You Tube video, I grabbed a hammer and got the screen attached. Then, I had to tackle the fact the door wasn't opening at all since a storm this winter. I had tried some WD-40 a few weeks ago and tried to just bang it and lift it..but it just wouldn't budge. I decide to be a bit more aggressive and just use a hammer to muscle it open. Ta Da..it actually worked! I was feeling pretty good after fixing the front door. I spent all afternoon bragging to my one year old daughter. (She reacted by pretending to chat on her fake phone...only a year old and trying to ignore me) 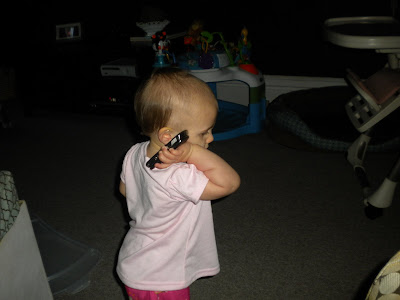 My question is, how did us strong smart stay at home moms get things done before Google? I'm sure it was those handy 101 uses for ______ books. Now along with Google, I can get twice as many tasks done before nap time is over. 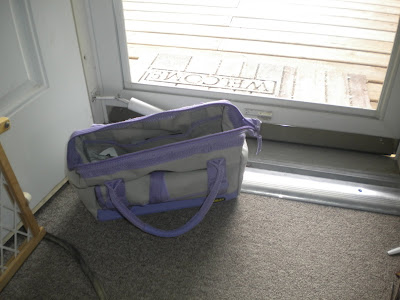 Conquering the house with my trusty side kicks: Google & my purple toolkit!