On Saturday, I went out thrift shopping with some friends. My daughter got to tag along since my husband had to work. In a thrift store, my daughter found two Barbies. One was apparently "Walk of Shame" Barbie because she was quite disheveled with a broken strap on her dress, missing pants and  crazy sleep hair. The other was an Ariel Barbie, which is right down my daughter's alley since we have watch Little Mermaid none stop on every road trip we've gone on (and that's 5 to 6 hours one way).

My daughter is only 2 years old, so I didn't know she was to the Barbie stage yet. She wouldn't let them go in the store though, so I figured two thrift store Barbies were a good place to start. I imagine that if this were Toy Story, those two Barbies must be terrified to be in my house, because they have bonked every surface in the house and have been forced into two bathes in less than 24 hours. Oh and "Walk of Shame" Barbie misplaced her clothing, so she was just naked Barbie.

I decided to make a dress for naked Barbie. My own mother made clothes for my Barbies, and I remember how much fun it was to have custom clothes. I decided to hand sew this dress mostly because its something I could do while watching tv with my husband. Of course it makes it a bit messy, but I don't think my daughter will care much. I found this tutorial from Craftiness is Not Optional. It was a great easy pattern. I'll probably make some more out of fabric scraps I have sitting around eventually. 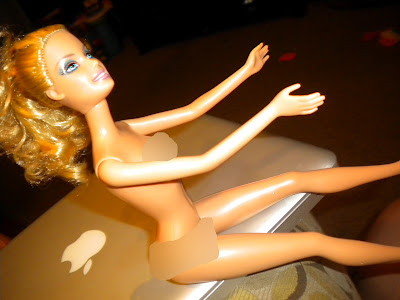 He he...yes I blurred out her lady bits. It just felt wrong not to... 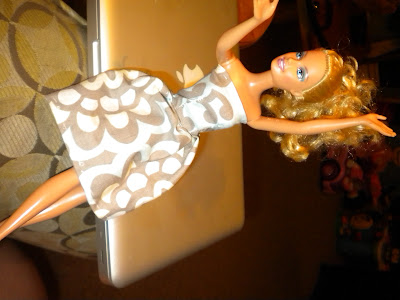 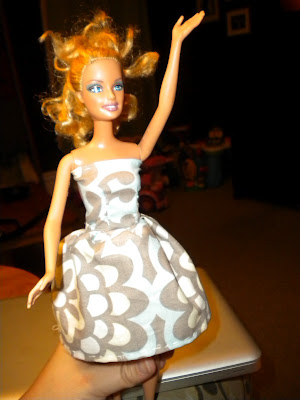 Yeah for not being naked anymore!!!! 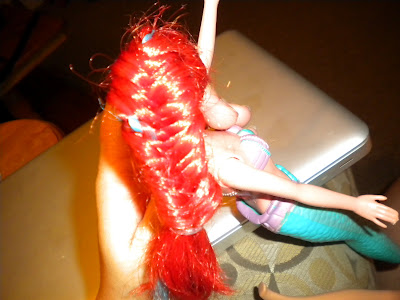 While I was at it, I gave Ariel my first ever fishtail braid. Get it. She's a mermaid, and I did a fish tail braid. I'm so witty. (Just Kidding....Kinda)