I curse you Wal-Mart Paint!

And of course I will tell you why.

My previous post had a wonderful desk I had inherited from my in-laws. It had beautiful lines but the wood left much to be desired, and we decided I needed to paint it. Being pregnant in my first trimester, I didn’t feel good. By “didn’t feel good” I meant I was pretty sure I had picked up a case of the plague in addition to being pregnant. I had morning sickness (no surprise since I had that the first 6 months of my last pregnancy). I could barely stay awake and often fell asleep while doing activities (and usually was quite confused when I woke up and I hadn’t finished folding clothes or my forehead was hitting the “H” key repeatedly). I also had headaches, sinus issues, and only slept a few hours a night. Basically, if you opened “What to Expect When You’re Expecting” I had every single thing they had listed, and usually it was prefaced with “A small number of pregnant woman suffer from _____.” To say the least, DIY projects were put on the back burner and just surviving the first trimester was priority number one.

Over the past week I’ve slowly started to come out of that first trimester fog, and actually find myself having a bit of energy. Then, I’d walk outside into the 100+ degree weather and that would be all zapped away.

After attempting to paint this desk twice before, but only getting as far as removing the knobs, I decided despite the weather I was going to get it done this week while my daughter was at grandma and grandpas. She is cute but a terrible painter. The paint jobs are terribly uneven. I did a through sanding, and the next day was painting day.

I have painted a ton of furniture, as you have seen on this blog. Usually I get my paint from Ace Hardware. I feel like you get what you pay for when it comes to paint. I was shopping for other items at Wal-Mart the day before painting the desk and saw they had the new Gidden Paint and Primer in One paint. It was one of Wal-Mart’s pricier paints, so I thought for simple white, it would be just fine. Plus it would save me the trip to the hardware store.

I was WRONG. SO WRONG.

(Side note: Wal-Mart used to carry Kitz paint, and I really did love that paint. I had great experiences with it)

On Tuesday, I did one coat. It didn’t cover very well, especially for being a primer too, but I could forgive that. I have found white is a pain for coverage on dark wood…but that’s pretty much common sense.

I let the coat dry all day Wednesday (well…I say that like it was intentional…I decided to spend my 4th in air conditioning and not painting a desk in 105 degree weather.)

This morning, I wake to the sound of thunder. At first I’m confused because we’re in quite the dry spell and thunder usually meant rain. Then I ran that thought through my head again….thunder means rain…..THE DESK IS OUTSIDE!!!! I jump out of bed, throw on some mildly appropriate clothes for public display and run outside. It hadn’t started raining. So, I quickly move all the desk pieces under the covered deck.

I’m thinking to myself, oh jeez. That was close. I almost had a soaked desk. Then I’d never finish this stupid project. Then I see the paint job on the desk top. It’s kinda bubbled in a few places..I pick at it thinking I would just have to touch up the scuff mark, and the paint starts to peel back. And not peel just a little bit, the ENTIRE top of the desk peels off in one peel. I don’t know if it was the humidity, the paint was just like a latex shell over the desk. It hadn’t adhered to the desk at all! 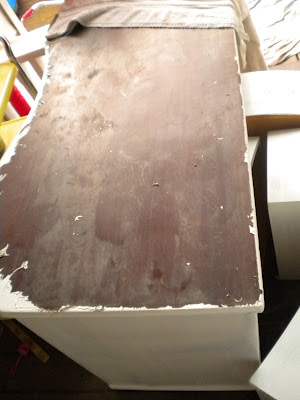 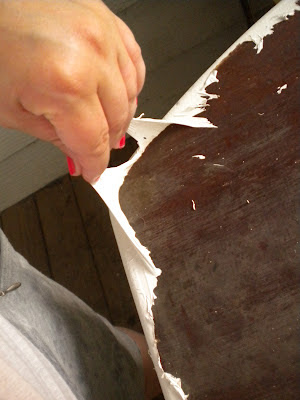 This did not go over well at 6 in the morning. I said a few choice words, I stomped my feet, threw a knob and yelled at the poor dogs who just looked up at me like “I don’t know what those babies do to mom, but she’s certifiably crazy.”

So, now I’ve got half a can of paint that has decided not to do the ONE thing it’s supposed to do…paint a surface. I’ve got a desk that is peeling off white paint like a bad sunburn. And I have to start completely over. And it’s a billion degrees outside and I’m pregnant. Oh and I have to buy more paint.

As always, love your rants! :)