Last week I decided to try something I saw a while back. I decided to paint some fabric. I had seen a couple different posts on how to do it. You could mix acrylic paint with a fabric medium so the paint dries soft. I thought about doing that but then I saw how expensive the fabric medium was.  Now, I have a tendency to mess up projects (please see below), and the last thing I wanted was the pressure of using expensive materials on an expensive piece of furniture with the possibility of permanently screwing up all of it. I got cold sweats thinking about it.

Then I saw a tutorial on using fabric spray paint. My local retailer had some in a three pack, so I decided to give it a go on a project I've been wanting to jazz up.

For Christmas, my daughter got an Ikea Poang chair. I had been wanting to give her a chair to sit in while she watch tv or read a book and at $19.99, it was a steal. The cushion doesn't come in fun patterns like it's adult counterpart, so I had decided eventually I would make a cover. Then I realized that would involve sewing and cutting large pieces of fabric, and I hate sewing a bunch of fabric. I always do something wrong where I bunch fabric or sew the wrong side and end up pulling stitches while watching a HBO series in it's entirety. (Recently, I did that while watching Six Feet Under)

It seemed like the perfect project to try out my fabric spray paint. 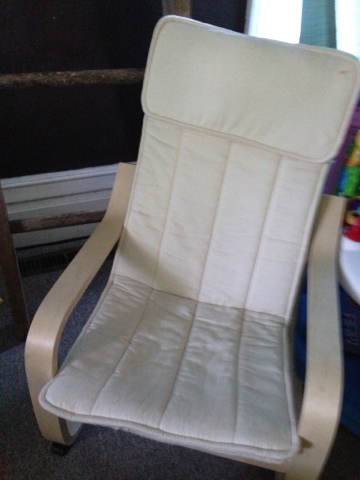 Simple linen colored cushion. I decided to use the "Caribbean Blue" color. The fabric paint was a bit spendy at $15.00 for a three pack (Blue, Pink and Green), so I decided to do a stripe pattern so I wouldn't have to buy another three pack. I grabbed some painters tape and went to work. 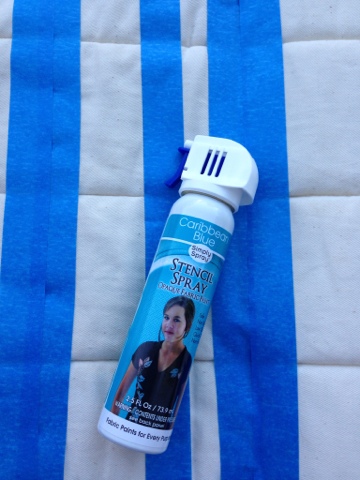 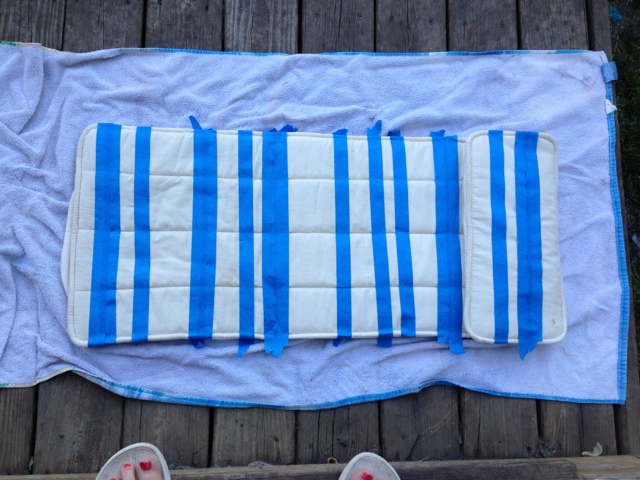 So I'm spraying along. Things are going great. It comes out pretty thick so it covers well. I was taking my time. Well...that's the thing about spray paint. You can't really take your time because you are practically spraying money out every millisecond. So, I ended up having a well saturated bottom half and only half of the headrest done. Son of a gun. 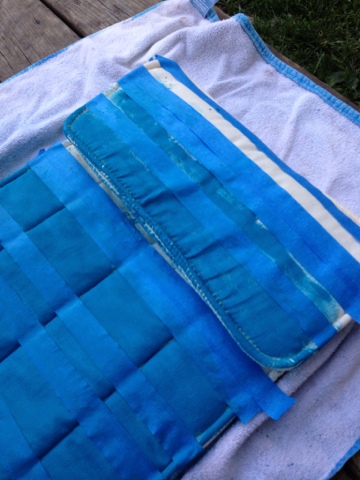 Hmph. So now I'm trying to figure out if I should just give up and run to the store and buy more paint. I look around at my daughter attempting to feed my hungry son sand and realize that a run to the store was more certainly not in my future. So, I figured I would just do the top head rest in Pink.

Err. Well that went well. First off, I was thinking the color might be a bit more muted. Instead it was neon pink. I was going for a teal color not highlighter pink. Plus I thought it would cover the blue. Yeah. Not so much. 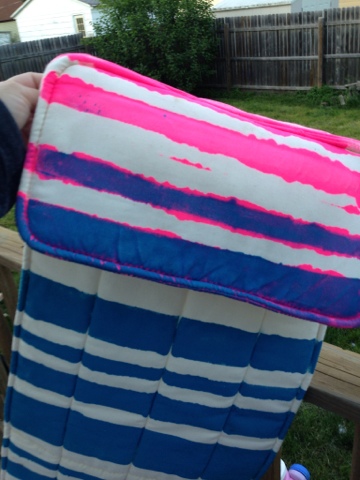 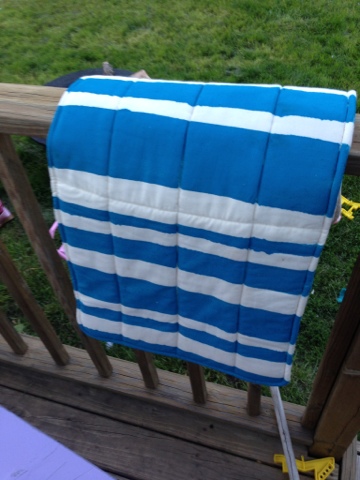 But the bottom part didn't look so bad.

So at this point I let the cushion dry and had a little brainstorming session. I decided I would make a cover just for the top portion, and hey, since I was at it, I could add my daughter's name.

I just so happen to have some Ikea fabric that would match this blue color. Perfect.

There's something else I probably should share. In addition to my inability to sew large pieces of fabric, I'm also pretty bad at measuring. So, yeah. I thought I had made a big enough cover. Turns out I was off by like an inch. Time for another silent shout of SON OF A GUN. Good thing my kids can't read minds. 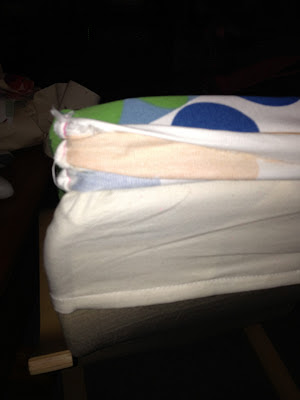 Errr... that's not going to slide down on the chair. I could have redone the entire thing, but it was late and I was finishing up Season 3 of West Wing. Plus, this is a kid's chair. It will enviably have some sort of bodily fluid on it eventually. I decided I could live with it being less than perfect. 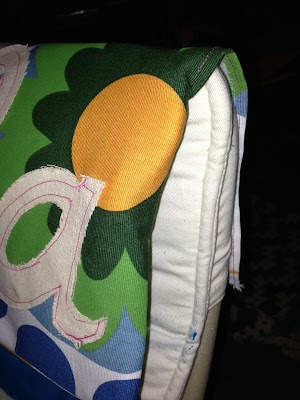 I just ripped the seam out of one side and hemmed up the side. I figured since the head rest folded over you wouldn't see it anyways. So I ripped and hemmed, and secured the back piece to the back with a little stitch. 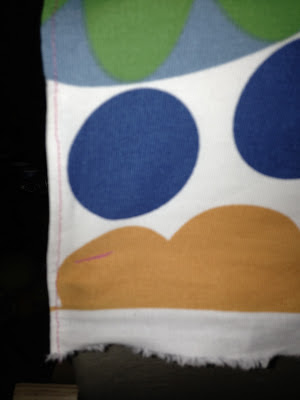 It does look a bit weird when you lift the head rest. 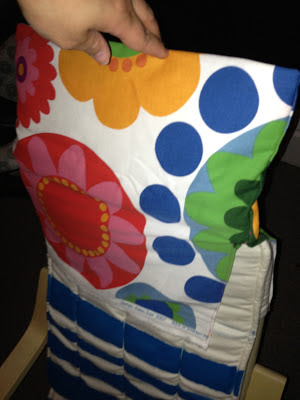 But after all that trouble, it does look okay when you put the head rest down. So, after many many screw ups, I'm glad to report my daughter told me it was "pretty" when she came downstairs this morning. Then, promptly spilled milk on it. 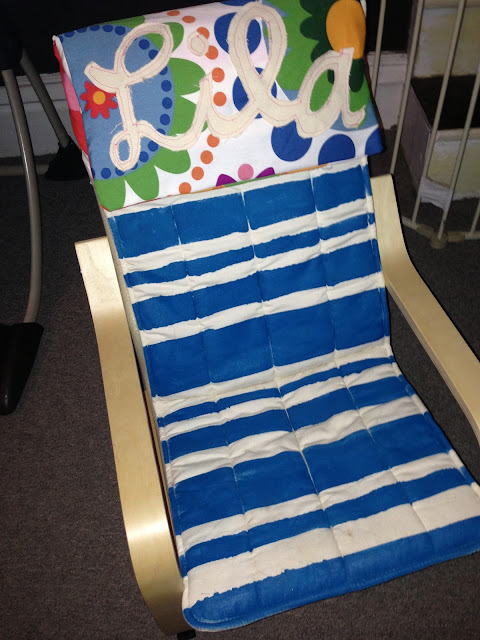 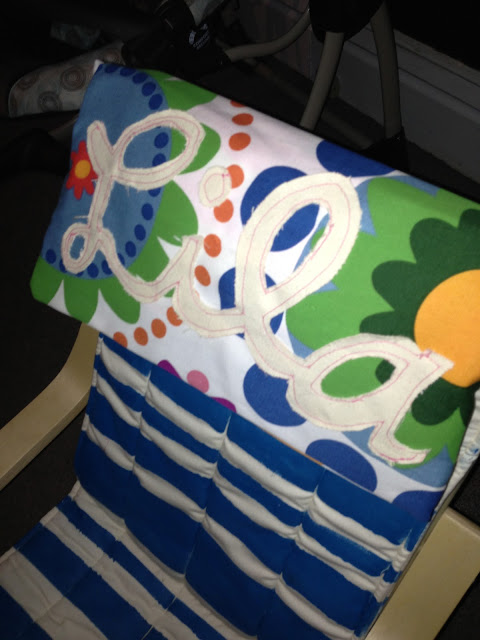