New Feature: What My Husband Did Last Night

I’m not sure if I have ever shared the hilarity of my husband’s night time escapades. I’ve decided they warrant a new feature called “What My Husband Did Last Night.” I'm sure he'll LOVE this feature.

Before I share what my husband actually did last night, I probably should catch you up on what he has done on previous nights. I’m sure many of you out there are either “the crazy sleep person” or know someone who is, and can probably relate to living with “a crazy sleep person.” I encourage you to share your own hilarious sleep hijinks in a comment below.

I first learned that my husband wasn’t a normal sleeper a few months into our relationship. I was back home visiting my parents when I got a phone call at 4 in the morning. It was my (now) husband, and he was whispering (why is whispering always SO much creepier?) “There’s ants all over the bathroom, and I can’t get them all.” Since most normal people do not call people in their sleep, I thought that a) he had clearly taken some sort of illegal substance, or b) was having a complete nervous breakdown. I answered back, “What do you mean?” He went on a tirade about ants in the bathroom and the total mess they were. Then, he abruptly hung up. I was worried that I had just received some sort of “mayday” call, so I called back. He answered in a voice that indicated he had just woken up, which was a bit alarming since he was so alert just seconds earlier on the phone. He argued with me for calling him so late and insisted he hadn’t called me. It took one view of his recent calls to realize he had called me, and it was a fairly long phone call.

Next time we were around his family, I told them about his late night sleep call. His brother informed me that this wasn’t anything new. My husband shared a room with his brother throughout their childhood. Sometimes my husband would go to bed before his brother and when his brother came in the room, my husband would yell at him, or simply sit at the end of the bed glaring at him. Many times they would just have unusual conversations.

The second incident was another late night phone call. He called to yell at me for saying "something" to his sister (this was a fabricated story made up in my husband’s mind, and I never found out what the "something" was). At this point I knew he was sleeping because he was talking nonsense. I decided to mess with him a bit. I fed into the story and argued back. Eventually, he got so worked up that he hung up on me. I should explain that this is the only time in our ten years together he has ever hung up on me, and one of a few times he’s been angry. He’s one of the most patient people I know.

I was having a good laugh about the phone call when my phone rang again. He sleep called me back to say sorry for hanging up on me, but then continued the argument! Eventually he hung up again. I called him back until he answered. He was groggy, and once again, in disbelief that he had called me, let alone several times.

Once we got married and moved in with one another, I got to discover a whole new level of sleep talking and walking. I’m lucky that, for the most part, he doesn’t sleep walk. I haven’t caught him doing anything like eating everything in the fridge or leaving the house. I know some people have to deal with that ordeal. I just get funny conversations and occasionally he’ll walk around turning lights on.

One night he shook me awake. I turned around to look at him, and he’s lying on his side. He flexed his arm, kissed his bicep and gave me a “What’s up” head nod. Then, he went back to bed without saying another word. It was very “Jersey Shore” of him. I laughed so hard it was difficult to get back to sleep.

A different night he woke me up and pointed at the window. He exclaimed there was someone out there. Well, we’re on the second story, and there was no way that was possible, but it pretty much gave me a heart attack. There have been a couple of different times when I have woken up to him whispering in my ear that there’s something outside the door. Makes sleeping real peaceful.

Another time he got up, stood at the doorway and just kept opening and shutting the door until I told him to go back to bed.

One night I was reading in bed and he started listing a grocery list. He stopped on “bread” and kept asking how much it was. I asked him how much he thought it was, and in a sing-song voice he responded, “About a buck-ninety-five.” Then, he started giggling like a school girl.

I did catch him once making a severe miscalculation of our closet for the bathroom. Thankfully I caught him. I recently heard several people on the morning radio show I listen to commiserate their bathroom incidents.

Sometimes he’ll wake up and just start yelling things. Random words. Sometimes he’ll sit up or start doing odd maneuvers (Wrestling moves? Dance moves? Who knows…) I’ve learned that if I say “Husband, you’re sleeping. Go back to bed” to him he usually stops and goes back to bed.

About two months ago I woke up at 4:00 am to my husband standing on the bed with one hand on the ceiling jumping up and down. I asked him what the heck he was doing. He responded “Waiting in line for tickets.” I did the normal go back to bed routine, but this one time he wasn’t having it. He kept jumping. Finally after three times of asking him, he laid back down. But then he grumbled for about 5 minutes about how he wasn’t going to get the tickets now and it was all my fault.

One night recently I was downstairs working on something. I heard someone/thing fall out of bed. Our dog came racing down the stairs. Suddenly, my husband came running down the stairs like he was being chased by a herd of bulls. (It sure sounded like a herd of bulls) I jumped up and asked him what was wrong. (I had assumed we were having yet another bat incident. Read about our other incidents here and here.) He kept shaking his head and mumbling something about fish. (?!?) He walked into  the kitchen, and got a drink of water. He was still mumbling about random animals. Finally, he told  me there was a bunch of spiders. At that point I realized he was still sleeping! The next morning he only vaguely remembered getting a drink of water.

Last week I brought our three year old daughter into bed with us after she had a huge freak out. I set her down next to my sleeping husband, and I asked her why she woke up crying. She told me it was because there was a monster in her room. I was about to say “Monsters aren’t real.” Or “Monsters are friendly…remember Sully”….instead my husband said in his sleep “Monsters are really scary. You should probably sleep here. I’ll protect you.” Nice. Real nice. I’m sure she’s going to be super excited to sleep in her room now.

This brings me to our adventure last night. I woke up to my husband mid Kung Fu move on our German Shorthair Pointer. He thought the dog was a very small intruder dressed in black. I stopped him, and got him woke up enough to realize that not only was the dog not an intruder, but that he would have most certainly woke both kids up with the deafening howl the dog would have let out. 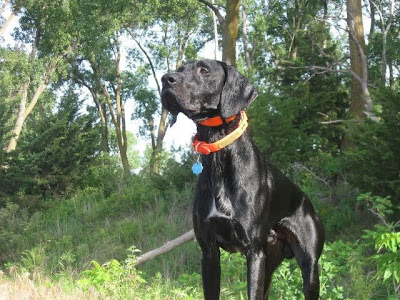 Share:
Labels: Humor, Just For Fun, What My Husband Did Last Night