We have a crazy month ahead of us with buying a house, moving and starting a major remodel project. If I'm hit and miss over the next month, I apologize in advance. I have a feeling I'll more than make up the posts once we move into our new home, and I get a sledgehammer. Bwahahaha (imagine an evil laugh here)

This Flashback Friday post is from last summer. It's been the most popular post on the blog over the past year. It's a bit of an experiment. I didn't find much success, but if you have somehow cracked the code of how to preserve a Color Run shirt, please let me know! I also have some hints on running a Color Run from a running novice.

I joined thousands of fellow Iowans yesterday to run "The Color Run" in downtown Des Moines. I did the Couch to 5K program earlier this year, and this was my second 5K. I couldn't find a number for attendance this year (2013) but last year (2012) it was around 30,000 thousand people, and I don't think it got any less popular!

I do have some hints based off my experience, but let's first talk about the important thing, how do you keep the color on your shirt??

The various websites for The Color Run (and other copycat races) say you should soak your shirt in vinger, iron it (to set the color) and then.....????. Most websites get pretty vague at this point. I read some other blogs, and no one seemed to have an exact example of a way to preserve color. I am lucky because I'm running another color race in two weeks (Run or Dye in Rapid City, SD). I hadn't planned on doing two but my high school friends were going to do it the weekend of our reunion, so I joined in. I will probably walk that one just to enjoy the company of people I don't get to see often. Anyways, now I two opportunities to get this color keeping thing right.

This was me "before" the race: 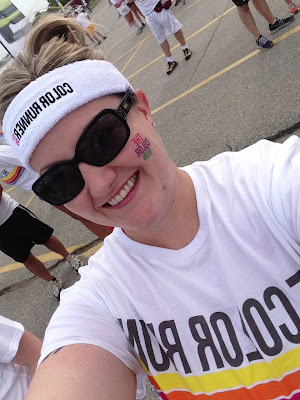 This was me "after" the race (before the color cloud): 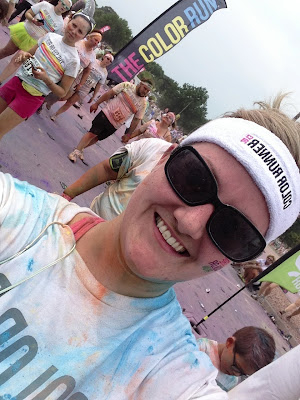 This was after the color cloud: 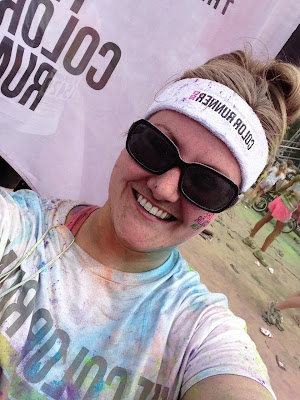 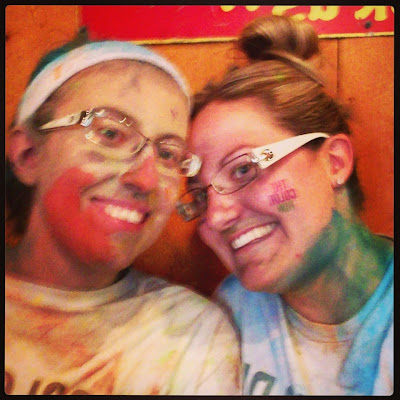 As you can see, you get more color in the color cloud.
So, when I got home, I sprayed the shirt with vinegar. I didn't soak it. I thought if I sprayed it on, it wouldn't smear. It was just as saturated as it would be if you soaked it, but I think laying it flat kept the colors from running together into a ugly brown.
Then I went to work ironing it. Beware. It stinks to high heaven. I opened two windows and worked quickly. 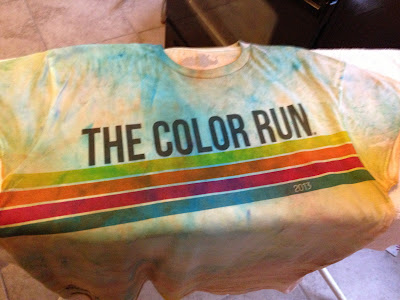 (Side note, you can kinda see that I modified the shirt sleeves to be a girl fit. See my hints below)

So, I decided that I wanted to ensure that my shirt had color. I had some spray fabric paint. I decided to do a couple of drops/sprays on the shirt to make sure I had some color. 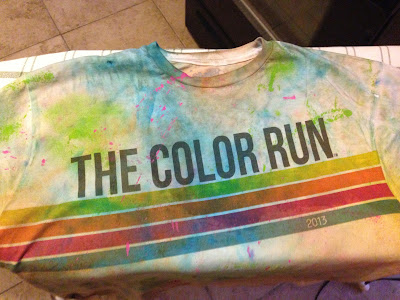 So now I've done the two steps The Color Run suggests. I have no idea where to go with it now. Line dry? Wash? Dryer. I decided that since the iron "set the color" I would put it in the dryer. I put it in the dryer with a old towel with the theory that it would absorb excess color (not sure if that worked, but I haven't seen any color in my dryer.).

Color is still good. I decided now it was a good time to wash it. I did a very very small amount of detergent and washed on cold. 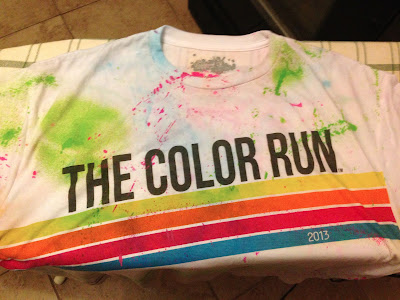 Uh Oh. Most of my color was gone. ARGH. 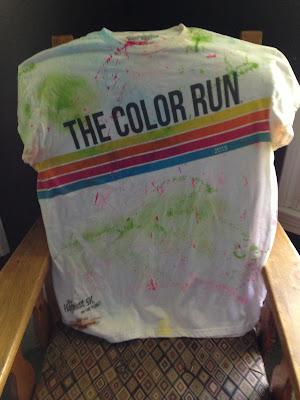 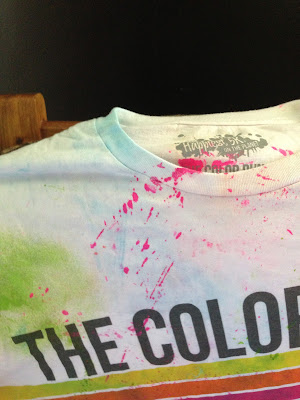 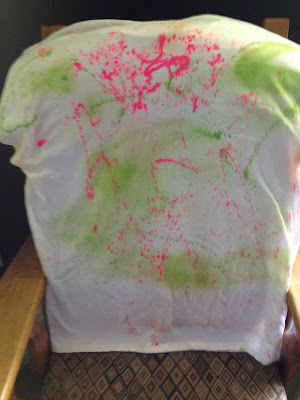 Thankfully I added some color so it's not completely white. Some of the blue stayed and a spot of orange and yellow.

Update: Wow. This post has been super popular! At my second race, I decided I'd try the soak method. However, before I even got home, the color was already knocked off the shirt, and I had some sort of brown mess on my shirt. I would recommend if you want color, you'll need to use actual fabric paint. (Hey, you could even include it in your pre-run festivities! Color people around you...with their permission of course) The color that is thrown isn't powerful enough to stay in the shirt. I am curious if anyone that has done Color Me Rad has had any success. From my research, they use a liquid color at some stations. Funny thing about all this is the color stayed in my Color Run socks...although it's a icky brown color after several races.

Observations and Hints for The Color Run.

1) I was told that there would be so many people that I wouldn't be able to run the entire thing. I would be stuck behind people walking or running slower than me (although I'm pretty sure that's not possible). I was pleasantly surprised. First of all, the majority of people walk it (at least in my wave they did). If you stay to the outside, you generally don't have to stop at all for walkers. Plus, you want to be on the outside to get some color! I walked through the color zones because what's the point of the race if you don't get some color!

2) How do you get the most color? That probably is the most popular question. I did some research prior to the race. First, you will see some water being sprayed down from the arch when you first walk through the arch. Don't hustle through it. The water doushing helps the color stick to you. Move slowly through the color zones on the edges. If you can, you may think about alternating what side you are on. Don't forget to turn your back to the color sprayers every once in a while. Some people did "color angels" right after the color zone. If you don't mind laying in the street, you can get some extra color that way. And the most important part of all....go to the color cloud after the race!!!! Not only is it really fun and cool to experience, you'll be covered in color!

3) It might be worth it to have a bandana or mask to cover your face. I don't usually have problems with smells or textures. However, it was pretty intense...especially during the color cloud. I can see why people do it.

4) Bring a change of clothes, a garbage bag and something to cover the car seats. I didn't because I have leather seats...I thought it would clean easy. It did come off, but I had to use a ton of wipes to get it clean. It would have been so much easier if I would have just covered the seats in the first place!

5) You will have to wait if you aren't waiting in line early. So this is what you can choose between. Either you join in the pre-party (there was some 'warm-up' Zumba at ours) and have fun that way. Or you can stand in line so you're one of the first waves. I had a ton of fun at the warm-up Zumba. So we weren't in line early and ended up waiting an hour for our wave to start. That kinda sucked. But, I think if I had the choice to do it again, I would still do the warm-up. It was fun to spend that time dancing.

6) We got to the race about an hour early. We got a close parking spot, and we easily got out of town too. It was nice change from most large events! (Yay for Des Moines planning!)

7) We did the 9 am start time instead of the 1 pm. It was crowded, but by the time we finished at noon, it was already getting warm. We were super lucky because it was a cool day to start out with!

8) You know all those cool Color Run pictures? If you do a little research, you would realize that purple is the magic color. Unfortunately, it's not a color zone. So if you can trade someone for that color (it does appear in some people's race packets), you might want to use it on yourself (and friends). Someone pointed out on the blog that orange doesn't tend to mix well with other colors (it tends to create brown). So you might want to avoid orange (or just get a little dusting). Blue and Green seem to have the most saying power. Green is also not available as a color zone.

9) The Color Run is fun with friends! Who else is going to take a picture of you feeling up the unicorn? Not that anyone did that...

10) If your friends don't bring their phones (and if you do, you will probably want to use a sleeve or a plastic sandwich bag), you will want to plan a place to meet up. Not only is there a ton of people, but at the end of the race everyone looks the same.

11) It's totally family friendly. I saw tons and tons of families doing the race. Two great ideas if you have kiddos that are too little be colored. 1) Use one of those convertible bike trailer/strollers. They have a plastic cover that can fold down, and 2) If you cover the stroller, use a white muslin blanket soaking in water. It will keep the dye from getting in the stroller, and it will great a cool dyed blanket! (alas, it might not stay that way).

12. The shirt is a unisex shirt, so it's not a woman's cut. I used this tutorial and made my sleeves a girl fit. The material of the shirt is pretty soft, so it didn't sew well. I ended up having to use a bit of tissue paper to sew through the shirt without skipping stitches.


13.  Make sure you wear your bib so it's clearly visible on the front. Why do you ask? Because that's how the professional photographers tag you when they upload all the pictures. At my second color run race, I was a little nutty with telling people around me. Most people realized they'd at least like the option to see the pictures even if they didn't purchase them, so they moved them to the front. So yes, you may think it's color to have the bib on your sleeve, or back or leg, but the photographer won't be able to tag you. You're potentially very cool picture will float out in the interwebs along with the 2000+ other untagged photographs.

That's all I can think of right now, but I'll post other things if I remember them! :)