The kids are napping and husband is mowing, so I decided it was a good time to take a break and write a blog post. For the past week my husband and I have been working on a project together. I thought we'd have it done in two days, but all my projects lately seem to be falling victim to Murphy's Law. So a week of work (two full days and a couple of evenings), and we finally have a DIY hutch for my Pyrex collection. 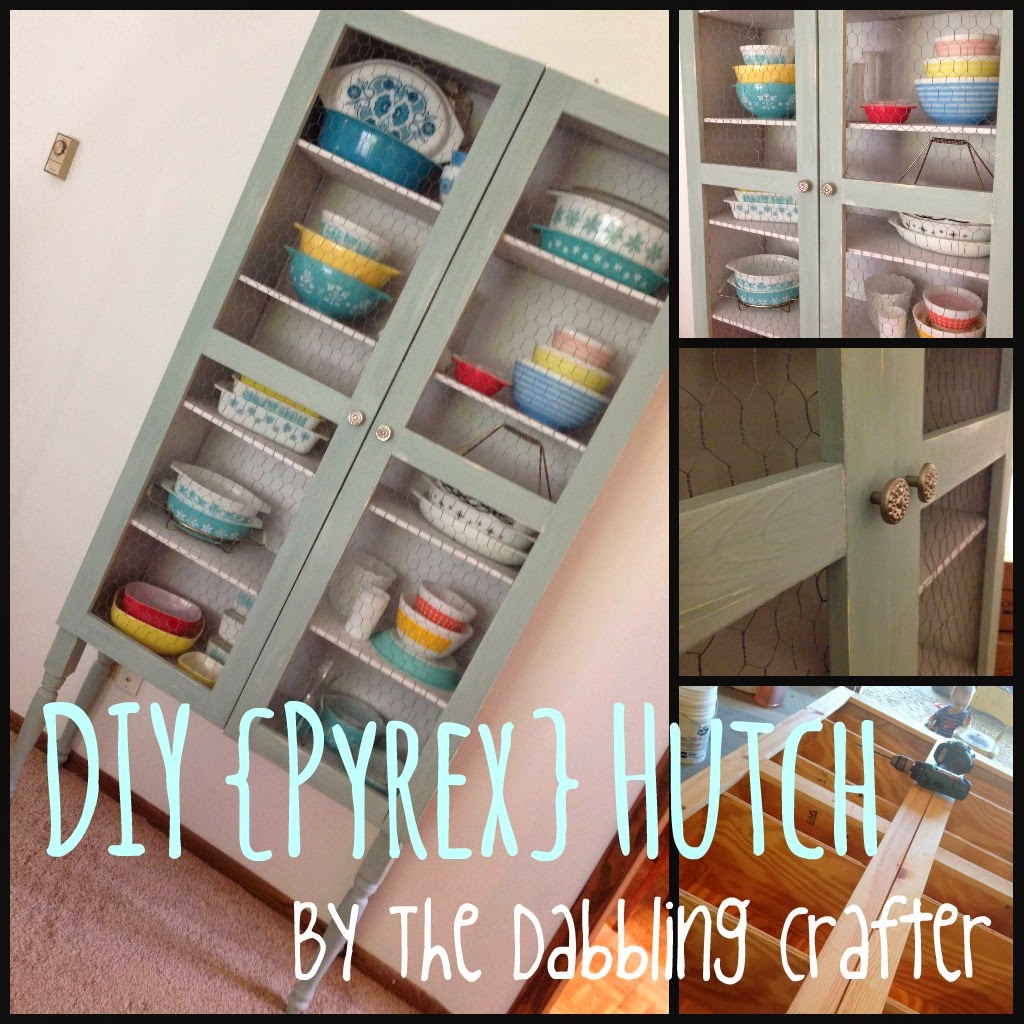 2 sheets of 1/2 inch plywood
4 1x3's
4 strips of lattice
4 hidden hinges
Four 15 1/3 inch table legs (About $15.00 a piece)
Chicken wire (I had on hand from a Restore visit a few years ago)
Knobs (About a 1$ for 8 knobs from a garage sale a few years ago)
Annie Sloan Chalk Paint in Duck Egg & Parisan Grey (2 sample pots at $10.00 a piece)
Johnson's Paste Wax
Olympic One Paint & Primer in One in bright white (Left over from another project)
Zinsser oil based primer (The good covers everything kind...and super stinky. Left over from another project)
Purdy paint brush (About 10$)
Table saw, jig saw, sander, Kreg Jig, drill, nail gun, air compressor & saw horses

I have been looking for a hutch for my Pyrex since we moved into Ugly House (a month ago already!). I wasn't finding much that would fit in the smaller space we had. I found more than a couple at antique stores, but each time they told me they weren't for sale, or one owner told me she'd sell me an old anthropology cabinet for $3,000.00. Uh. No thank you.

My husband was starting to get irritated with the only boxes left in the house...a big pile of boxes filled with Pyrex. I told him they weren't coming out of the boxes until they had somewhere to go. I joked that if he built me a hutch, I could get them put away. He took me up on my offer and said if I designed it, he would build it. Really? While we're at it, I want a new kitchen and the exterior of the house painted. Can you do that too? By next Wednesday?

I decided I wanted a tall skinny cabinet (but not too skinny). If I was going to build it myself, I thought chicken wire would work instead of glass. We are, after all, on a country acreage. I measured the space and decided I wanted a 5 foot by 3 foot cabinet. I didn't want it to stick out too far, so I only wanted it a foot deep. Since I had practically designed the bookcase equivalent of a real Barbie, I knew it would topple over without being anchored to the wall. I was fine with mounting it to the wall, especially with little kids.

I drew up some specs for a simple cabinet and expected the design to sit in my house notebook for the next couple of months. To my surprise, my husband looked at it and decided we'd make it that weekend. I'm pretty sure that has never happened before! I remember looking woefully at my hanging wine rack in a pile in the corner of my dining  room for 4 months when we moved into our last house. (Alas, the wine rack is again sitting in a pile in the corner.)

The timing was pretty good because we were sans one kid for the weekend. My in-laws were taking my daughter to the family cabin. We just had our 18 month old for the weekend. Normally that would be a nightmare. Our son is quite cute, but terribly clingy. There's no hope for dishes or laundry when he's around. Okay. Let's be honest. There's rarely hope for that anyways. He would rather be held all day long...but not in the baby carrier. That's fake holding and will not due for him. (Argh!)

To our surprise (two surprises in one week...whoa) he was a complete angel. Maybe he just needs to be held because his sister is SO intense. He played with his toys, attempted to build his own hutch, and swept up the shop. 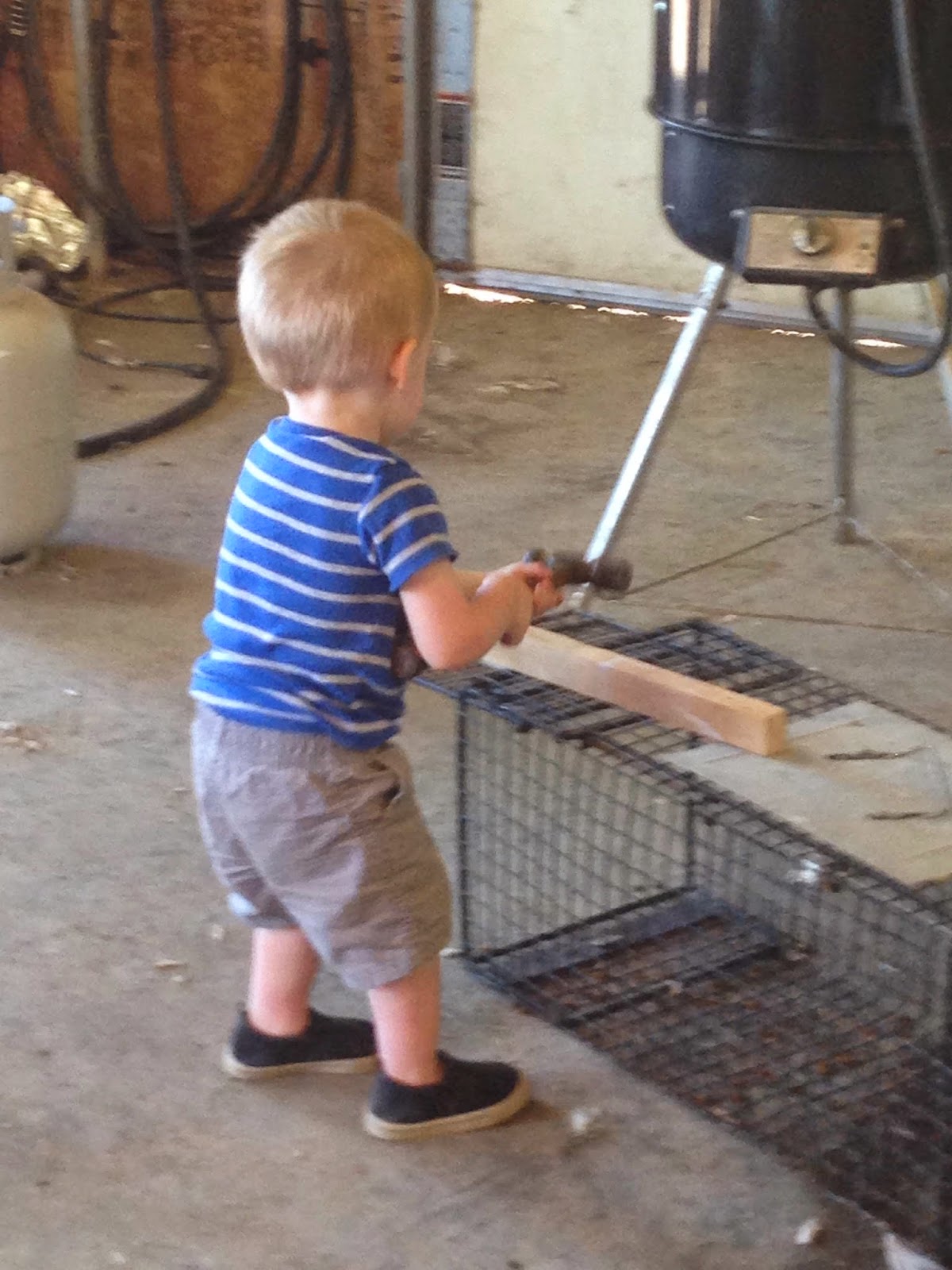 And that's where the good surprises end.


Murphy's Law, remember? We started to build the main part of the hutch which really was a bookcase. It came together pretty easy and in just a couple of hours. Then went to build the doors. We had found out that we had bought 1x4 which wouldn't work for the door. You would have have an opening just a few inches wide! 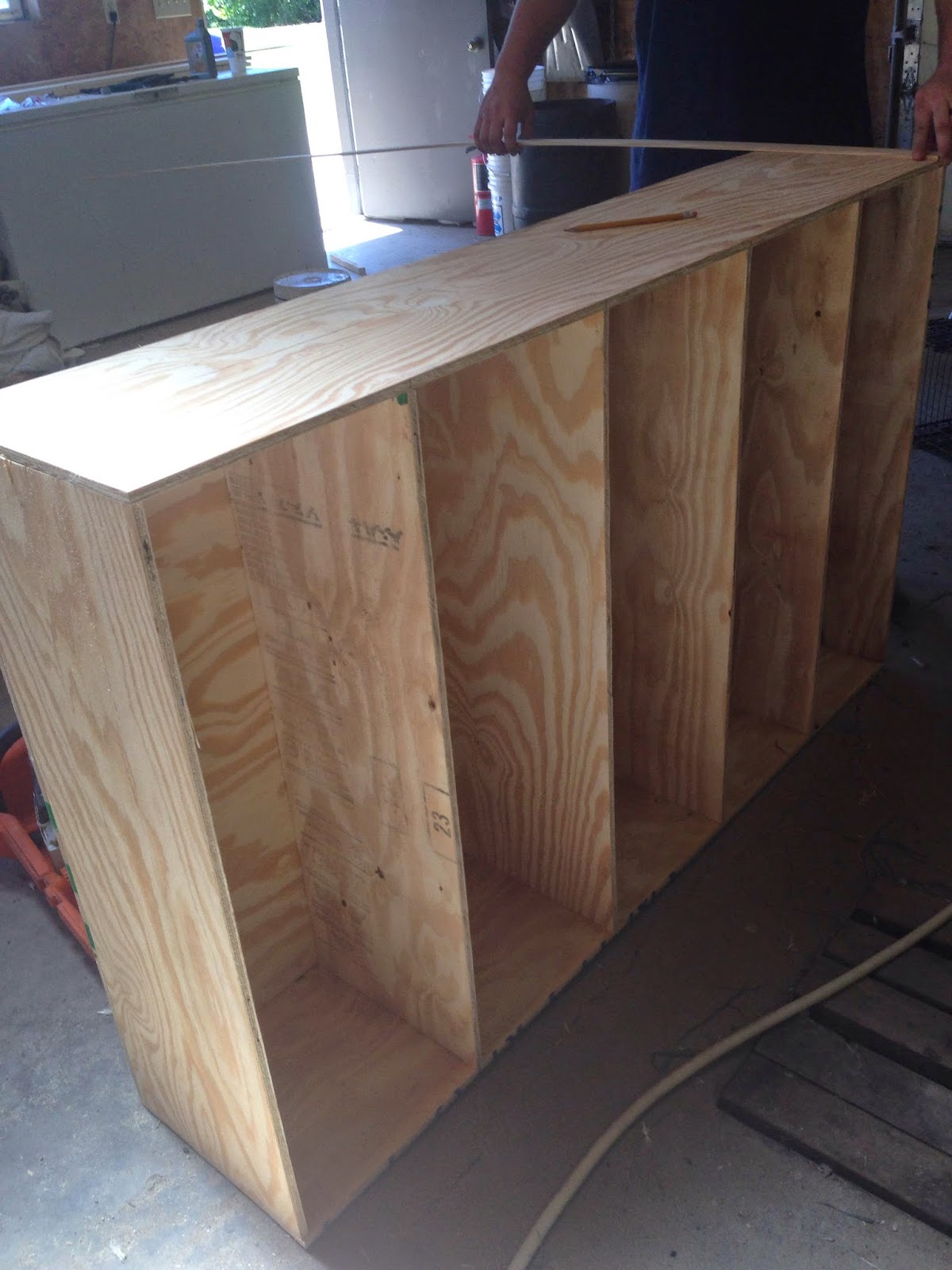 Then we looked at my design. I had one door. One large 3 foot long door. So now we've decided we need two doors with thinner wood, and we only had some 1x4's on hand. We went to cut them down the middle with the table saw and the saw decided to stop working. No matter how my husband tried (and by tried, I mean he jiggled stuff and plugged it in and out) it kept stopping about a foot in.

It was time to go home after we ran into that hiccup. The next day we went to Lowes to get some more wood. My husband also decided that we needed to jazz it up. Immediately I thought beadboard would look nice and country. But they don't sell wallpaper at Lowes. No wallpaper at all. Don't they realize that it's back in style?! And the beadboard paneling was going to be way too large to fit in a SUV with carseats...and I don't think I can strap my son's seat to the roof of the car. We decided on some thin lattice trim instead.

Once we got home, my husband got called into work. (Emergency with a dog) We were delayed again. Since our son was napping, I thought I would try to use the table saw to keep the project moving. Hint to those DIY out there. Watching someone use a table saw is not the same thing as knowing how to use a table saw. Crazy, I know.

I was extra careful not to get my extremities anywhere near the saw. I also put on safety goggles. However, I did not know that the wood would kick back at me. The piece of trim kicked back and hit me square in the boob. Let me tell you...I was glad it wasn't my face, but it doesn't feel good to get sucker punched in the tata's. I decided I'd wait for my husband to get back.

Once he got back, we continued to work, but we realized that the doors wouldn't stay together well with the nail gun. I did some hunting in the in laws shop and found the holy grail of Ana White....the kreg jig. I am pretty much in love with it now. It was everything I imagined it would be and more. I let my husband cut while I pieced together the door myself. Once we were done, we noticed that one of the pieces of the door had a slight bow. I was fine with it (it was going to be inperfect anyways), but my husband hated it. He decided to add in a center piece to the door to push the bow out. It worked and made everything square, but after we did all the painting, the bottom right corner of the right door stripped out and there was a gap. 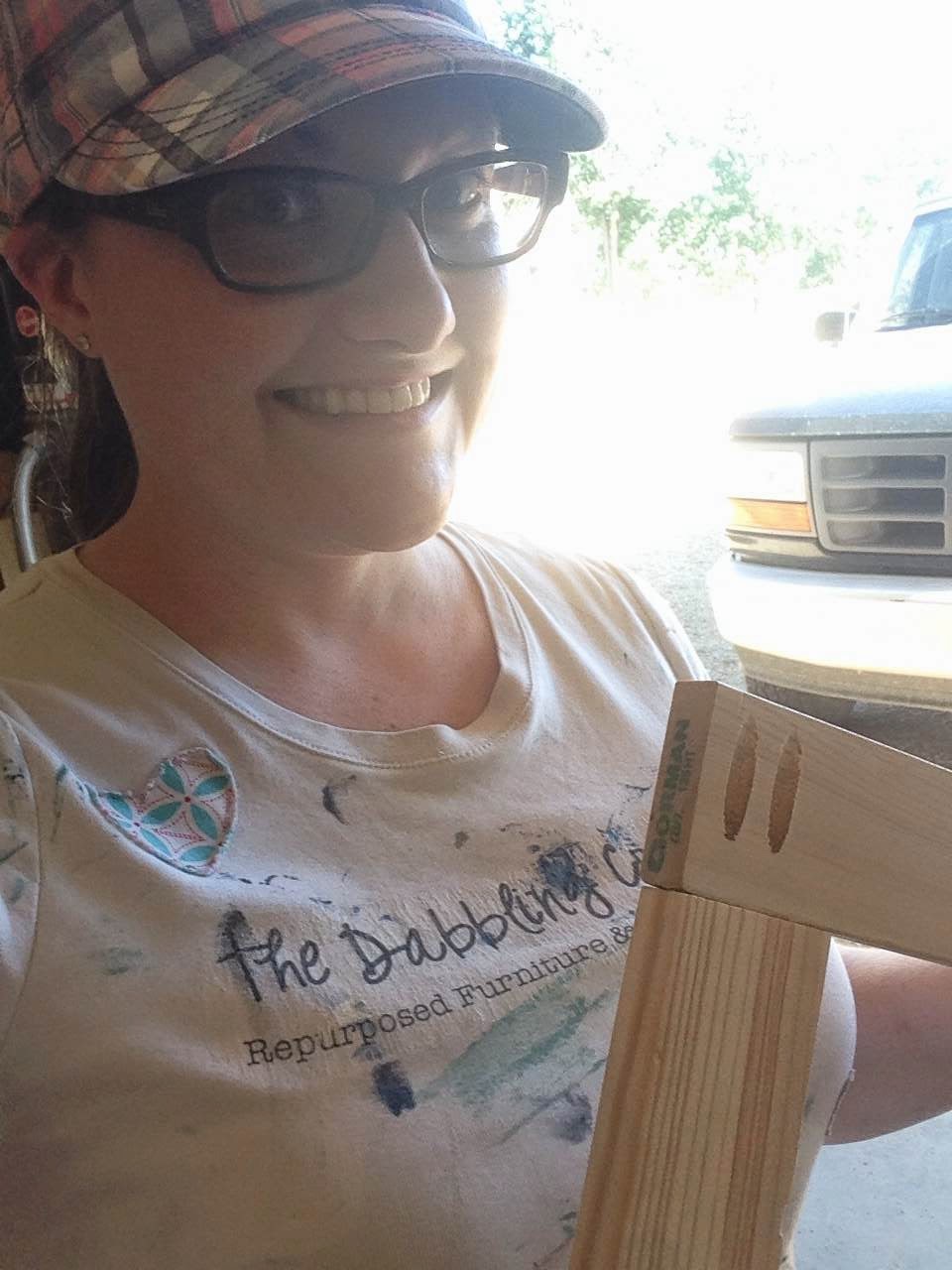 Husband claims it was my overzealous use of the drill on the pocket screws. I think it's the pressure of the center piece pushing the bowing board out. (I'm, of course, right. I'm the wife after all.) A long screw fixed the problem for now. Until that pressure pops it out again...and I am proven correct about the center piece. 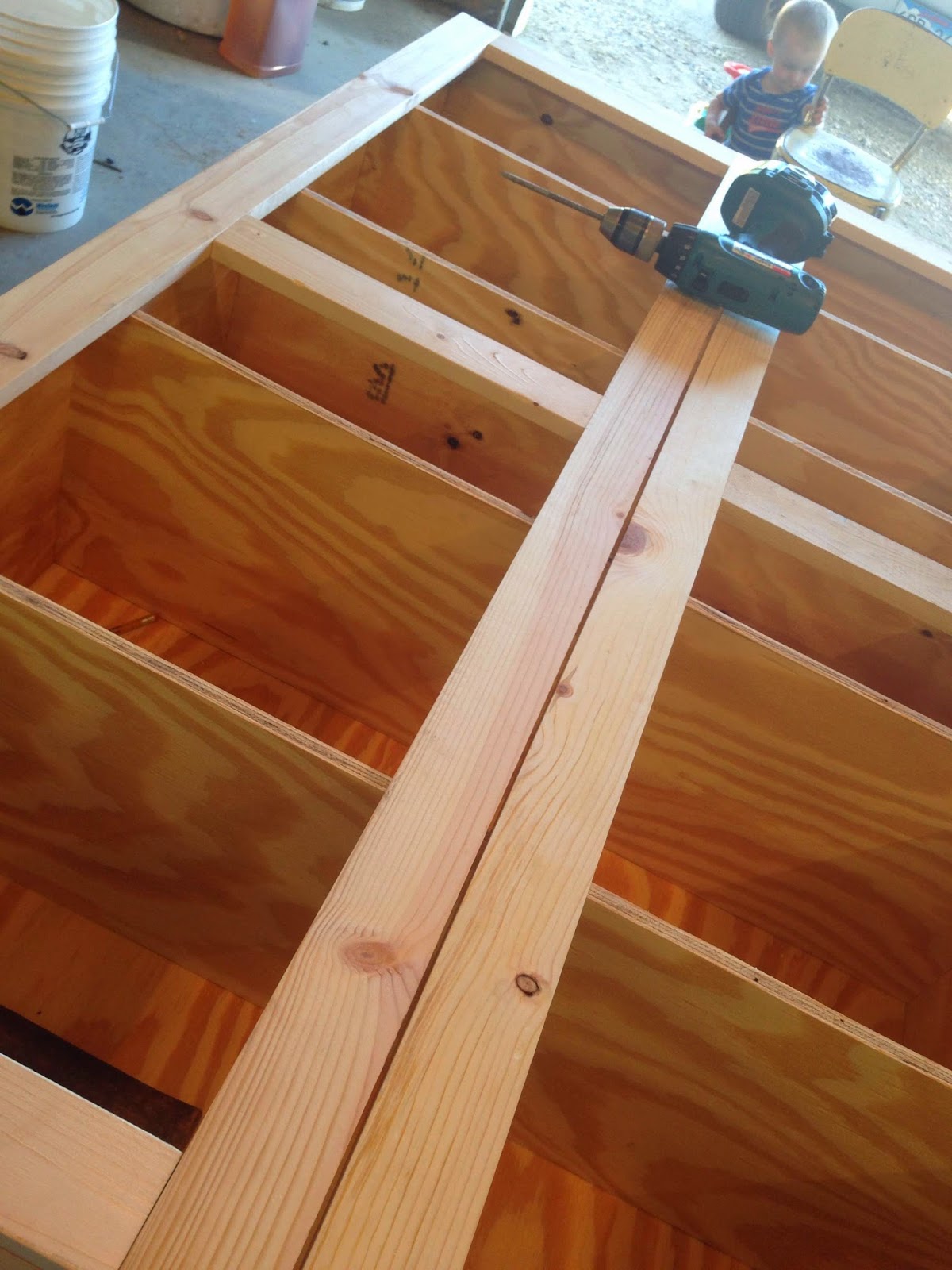 My husband went to install the hinges and table legs. We soon found that with the shelves installed, it was very difficult to install these items. The table legs are connected, but I wouldn't drag the hutch by them. We were mounting the cabinet to the wall anyways, so we didn't worry too much about it. 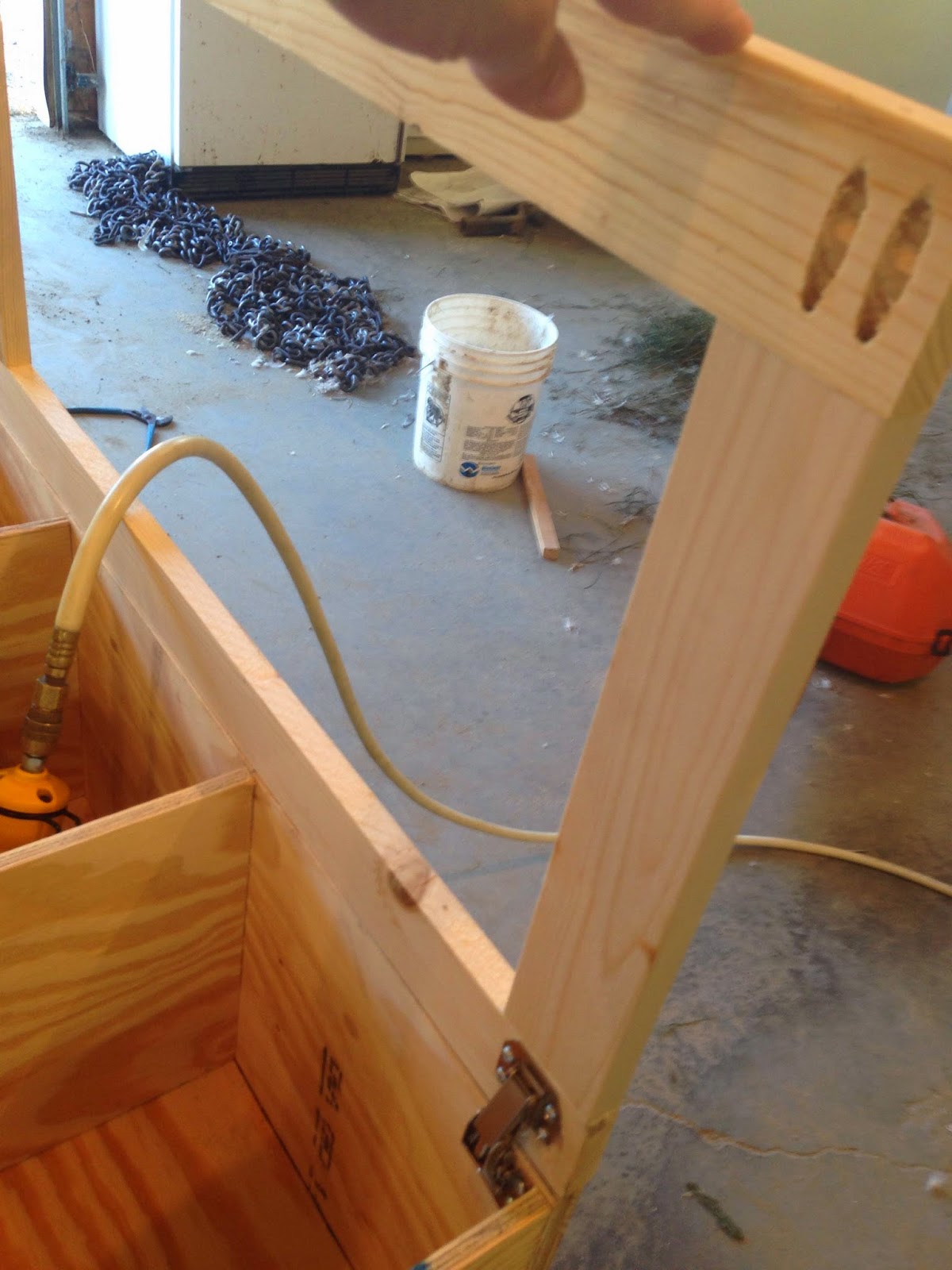 The hinges got removed and repositioned a half dozen times. Each time my husband used a drill without a magnet bit, cursed for 10 minutes while dropping the tiny screw before finally getting it in (while I made many inappropriate jokes), and I nagged him that he should just take a couple of minutes to find the magnetic bit.

Ah. Marriage and home improvement...goes together like a horse and carriage....on fire. 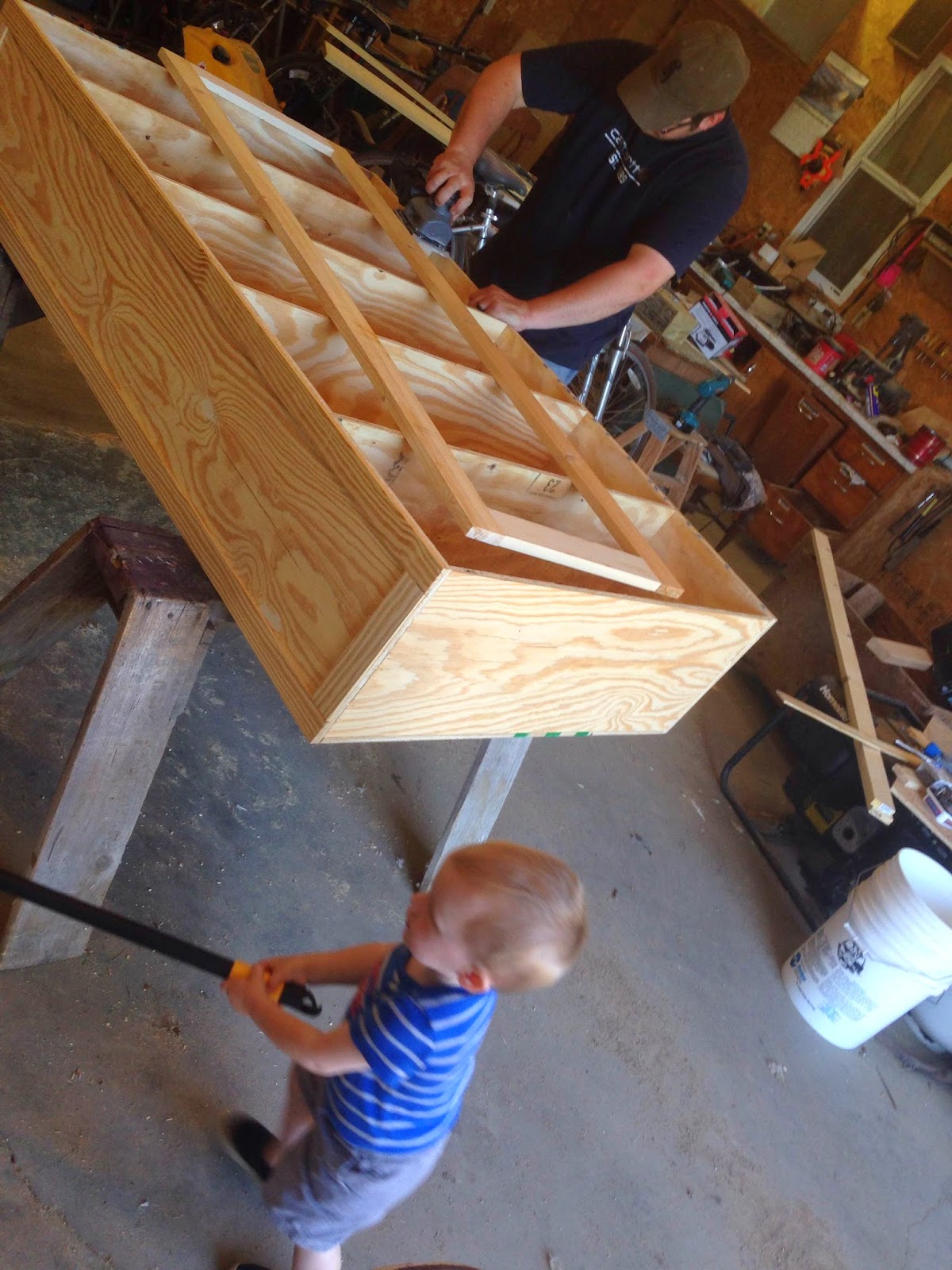 The second day, the hutch was completed. It was time for me to work my magic with paint. However, I was cheap and only bought sample pots of the Annie Sloan paint. I knew the unfinished wood would soak up the paint like no other, so I did a coat of primer. Once that was done, I mixed the interior grey color (Parisian Grey) with white latex paint in the hopes that it would stretch the paint over more square footage. The inside coat isn't all that great. We didn't take enough time to sand, and I attempted to use a roller and brush combo. Eventually the inside may get a new coat of all chalk paint with just a brush. But it works for now. So, don't look too close at the inside.

The outside got two coats of Annie Sloan duck egg. It's a paint that has a hint of blue and green in it. My little sample pot was just enough to cover the outside with a dash of white latex paint mixed in. I just used my new Purdy brush on the outside, and it worked great.

Before distressing the piece, I added in the chicken wire with a staple gun. It was a real pain to deal with, but part of the problem was trying to add the chicken wire while it was still on the saw horses. I am not tall enough to reach the middle parts. I eventually tipped it over. After all that was done and I was covered in stinky sweat, I just did some simple distressing with some steel wool and gave everything a good waxing.

I was feeling pretty good about having it done. My husband and I picked it up, hauled it inside and then realized the spot I had picked....the spot I had built the entire cabinet to fit...was over a baseboard heater.


ARGH. Three options. One: attempt to build it out so it would still fit there. However, that means one pretty large board on the wall to attempt to anchor in so it wouldn't hit the heater. Two: Mount it about three feet over from where I had originally wanted it. But, that was in the middle of our living room. Super awkward. or Three: Mount it on the wall we're going to eventually tear down and just figure it out then. We went with option three. A problem for a different day. 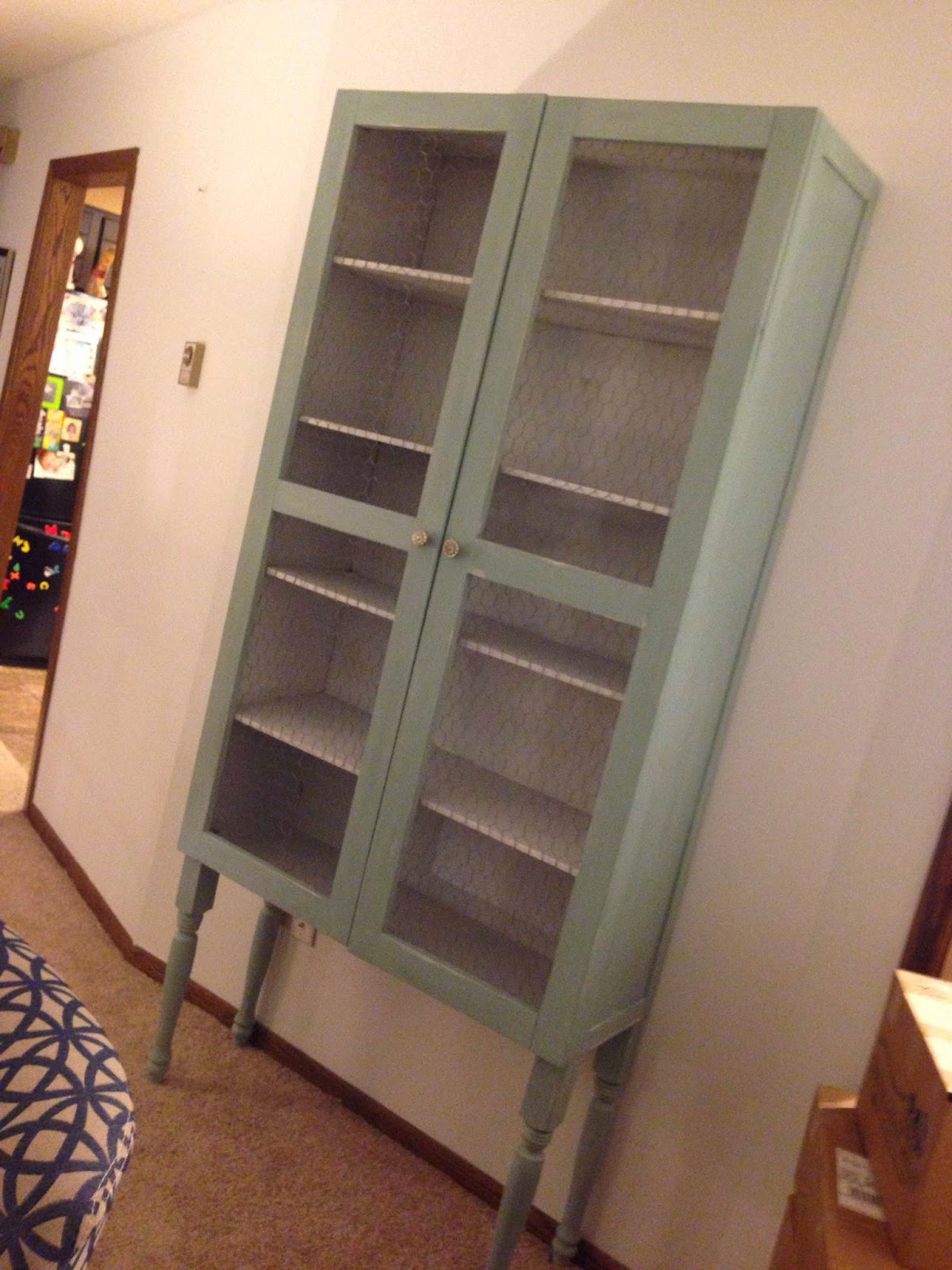 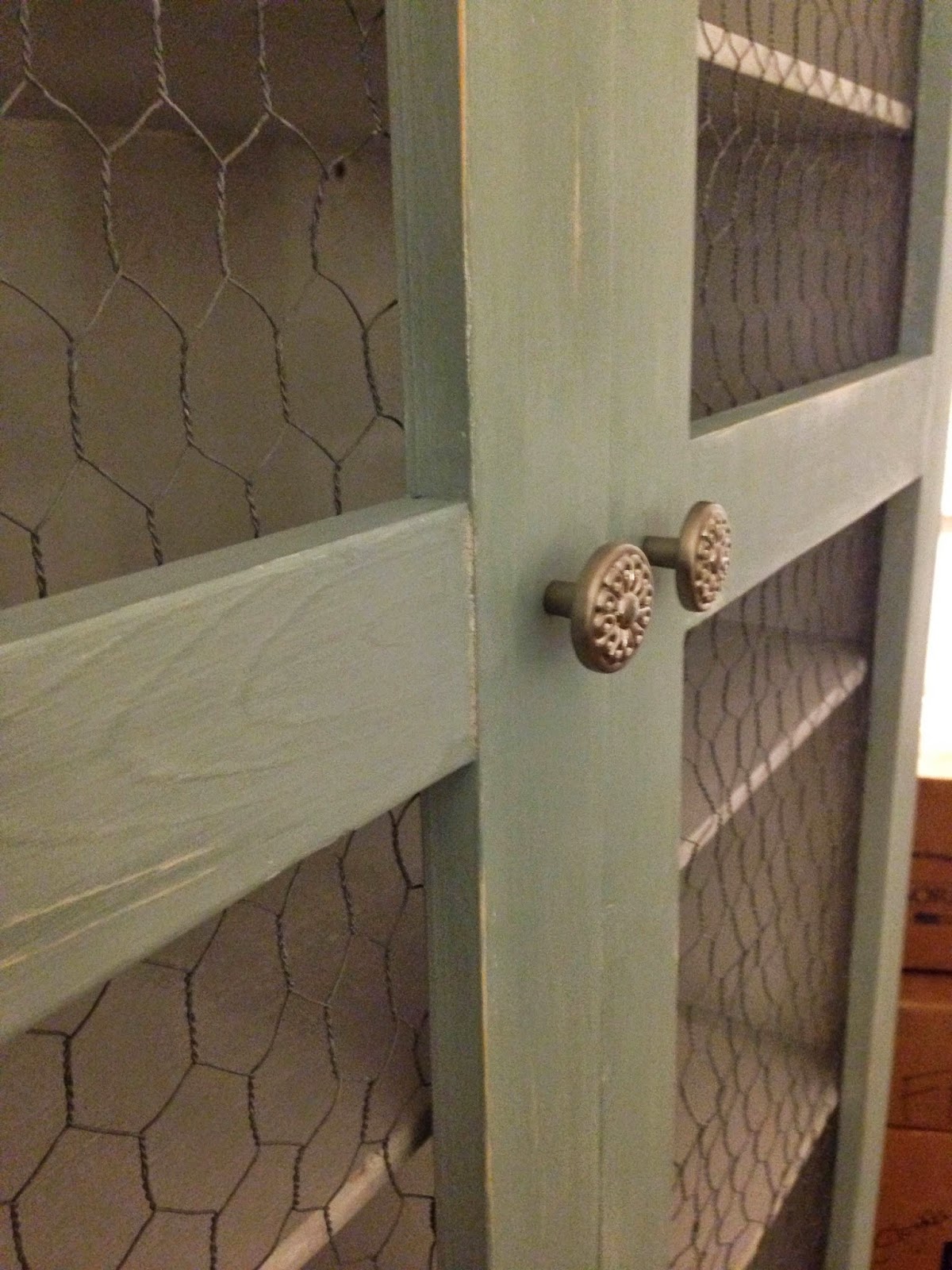 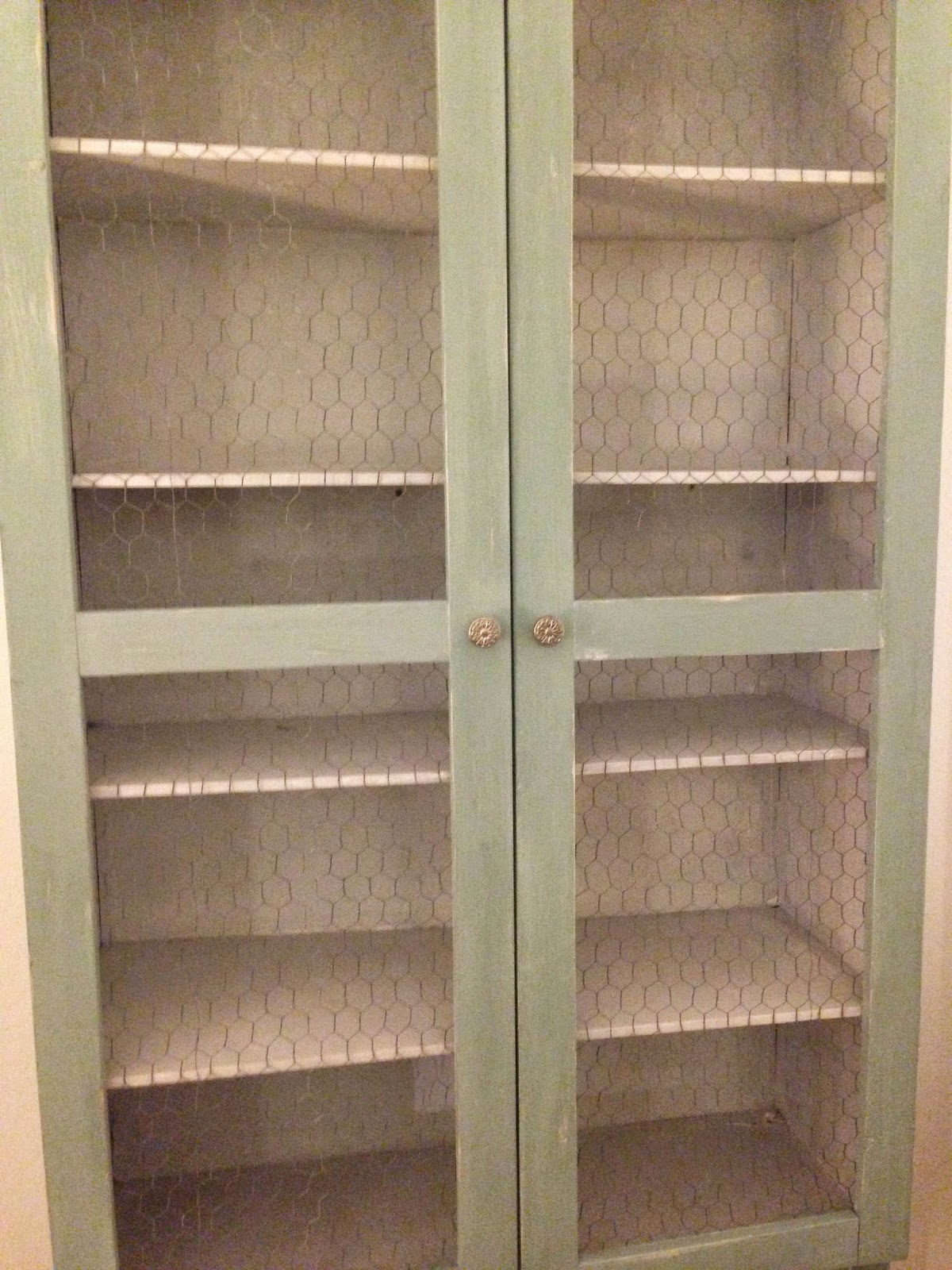 I'm extremely happy with the result, and I'm excited that it came together so quickly. I'm even more excited that I'm still married after building it. It gives me hope for the upcoming kitchen renovation. :) 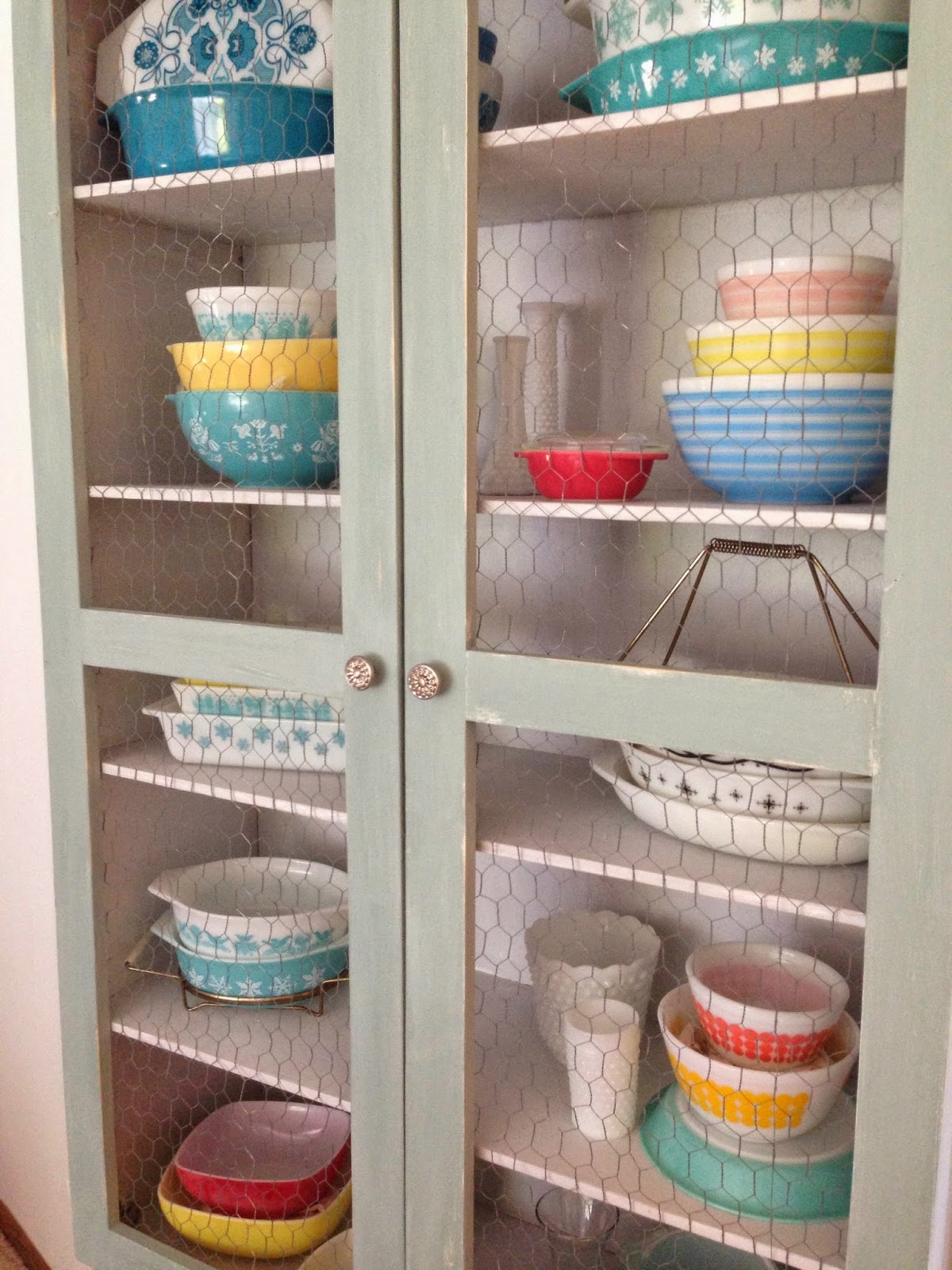 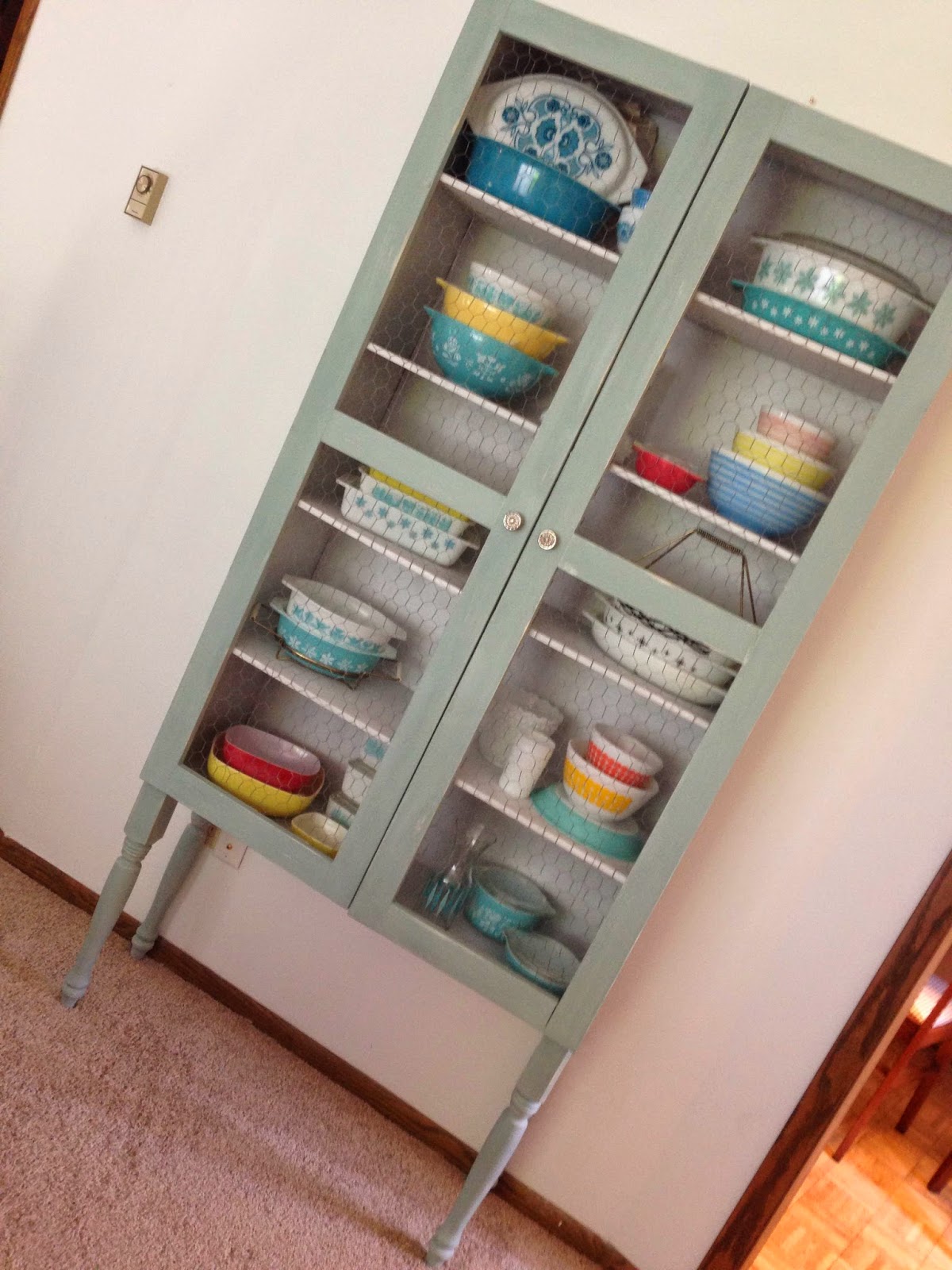 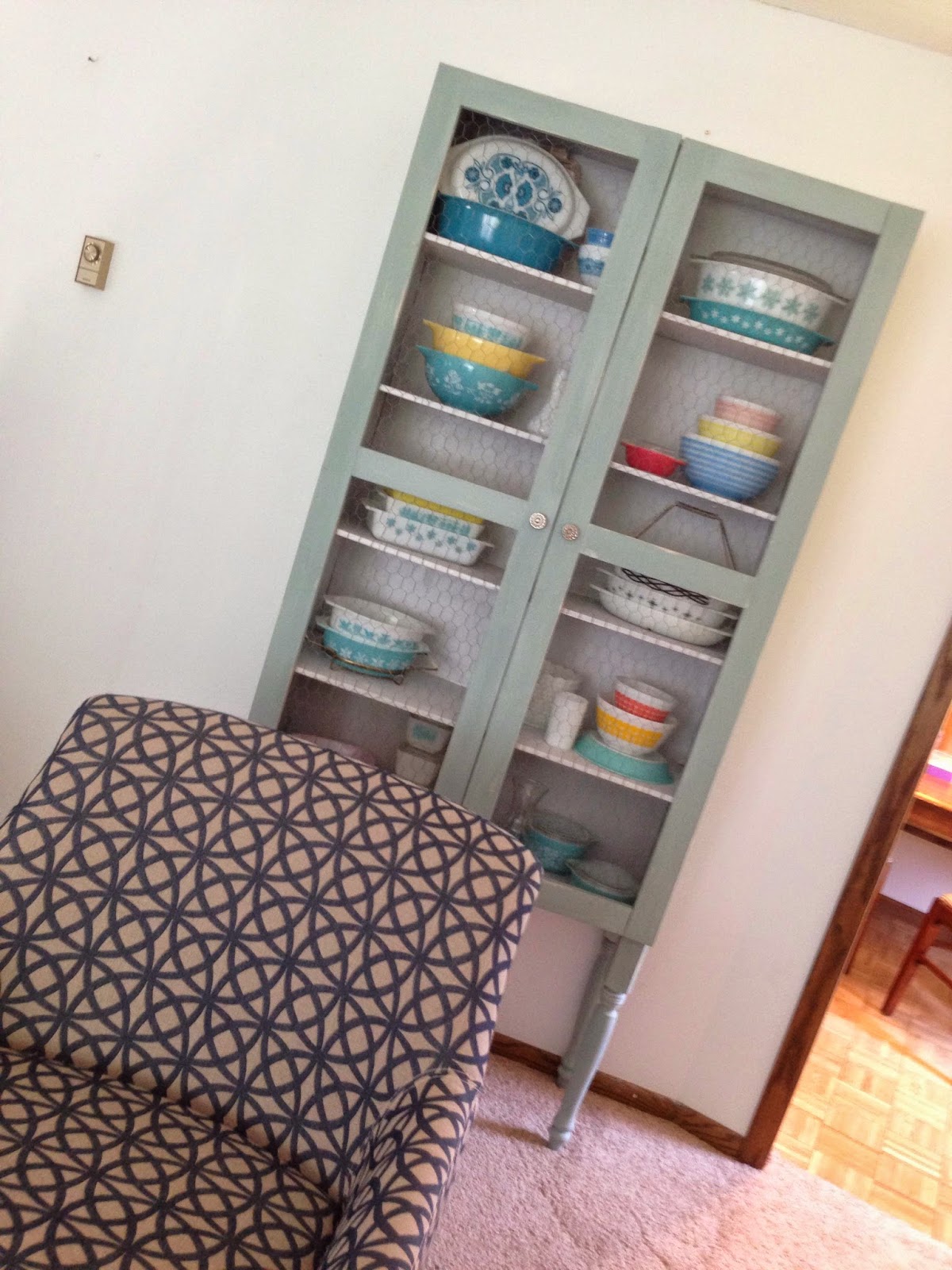 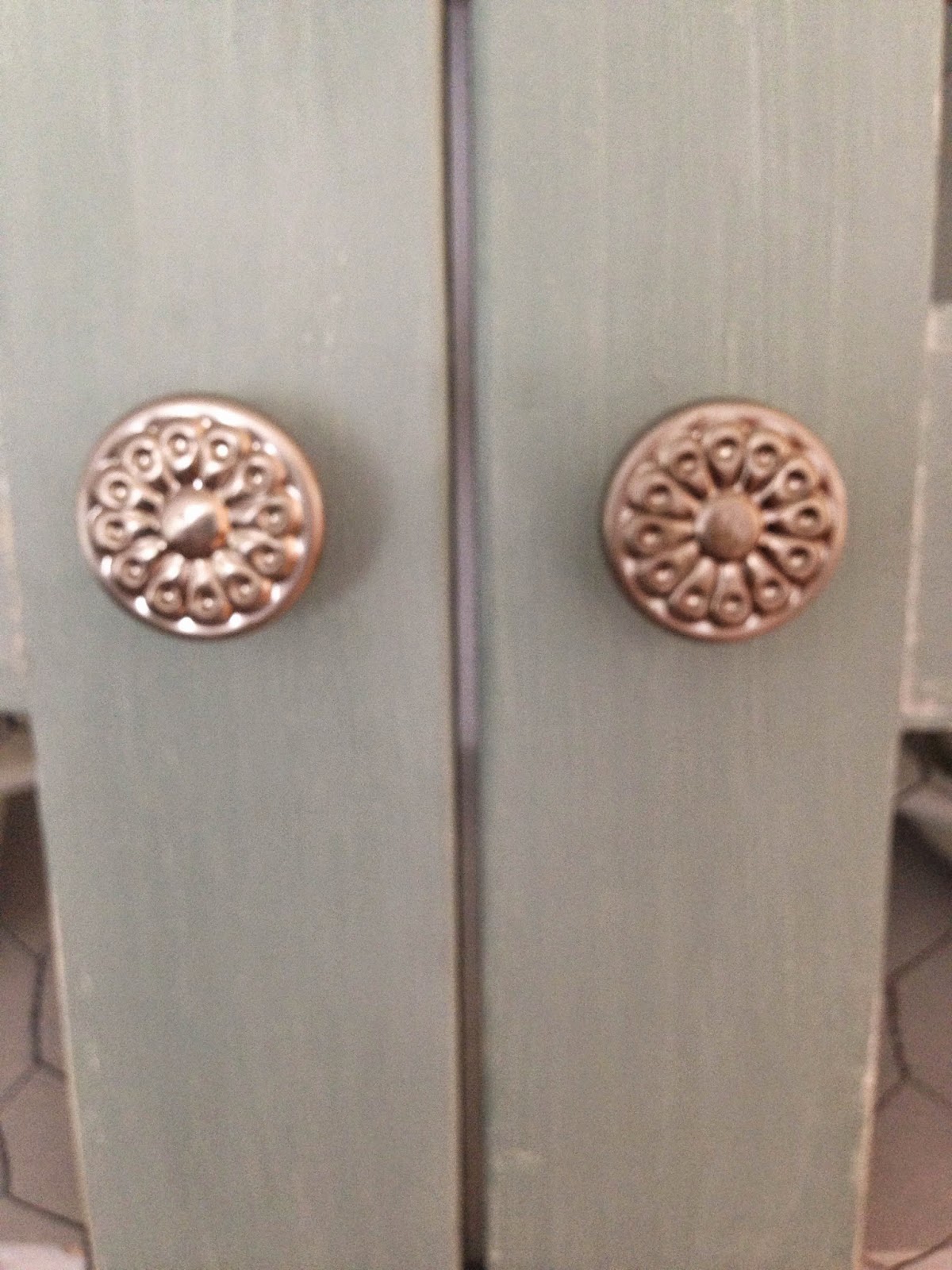 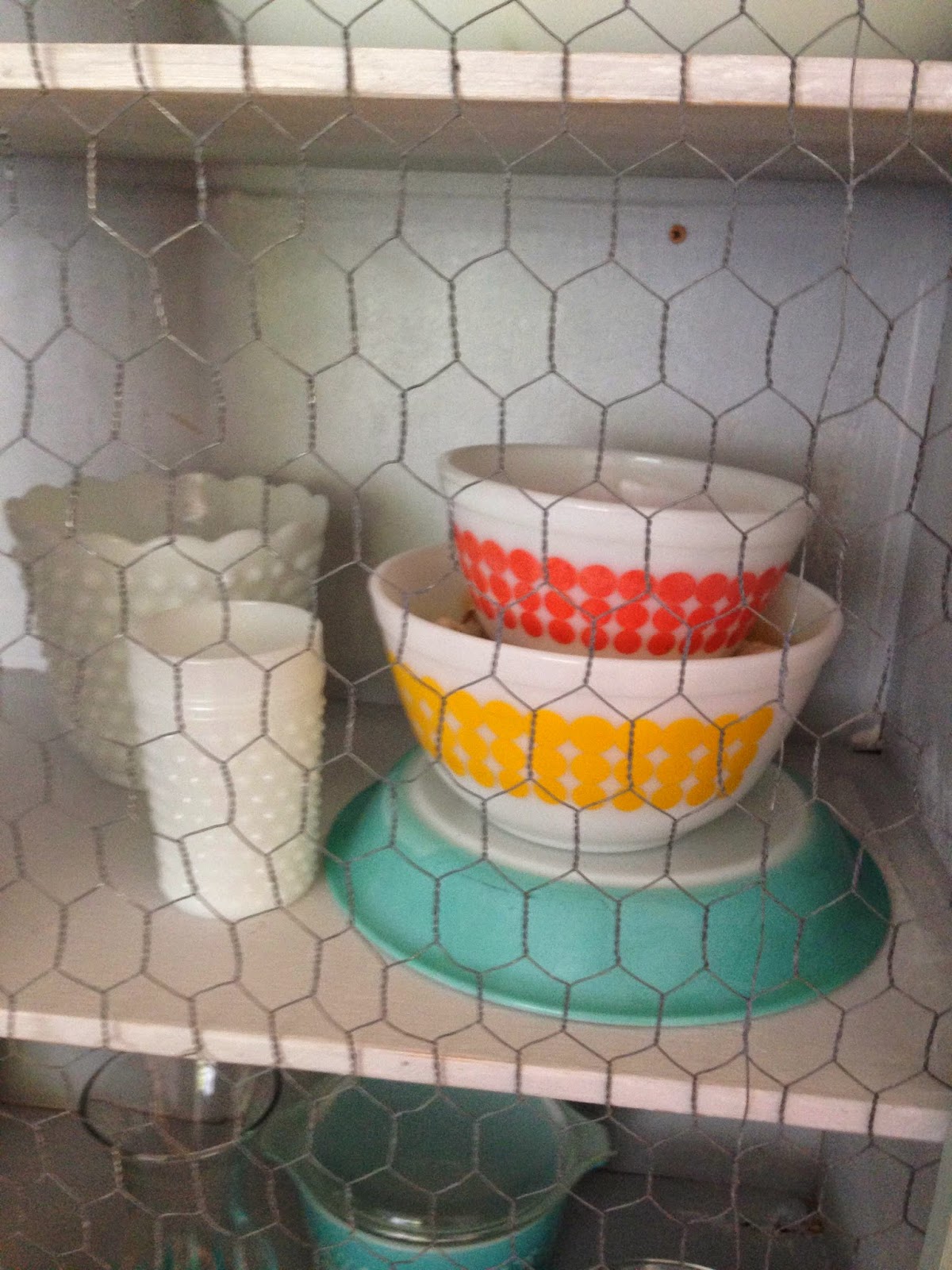 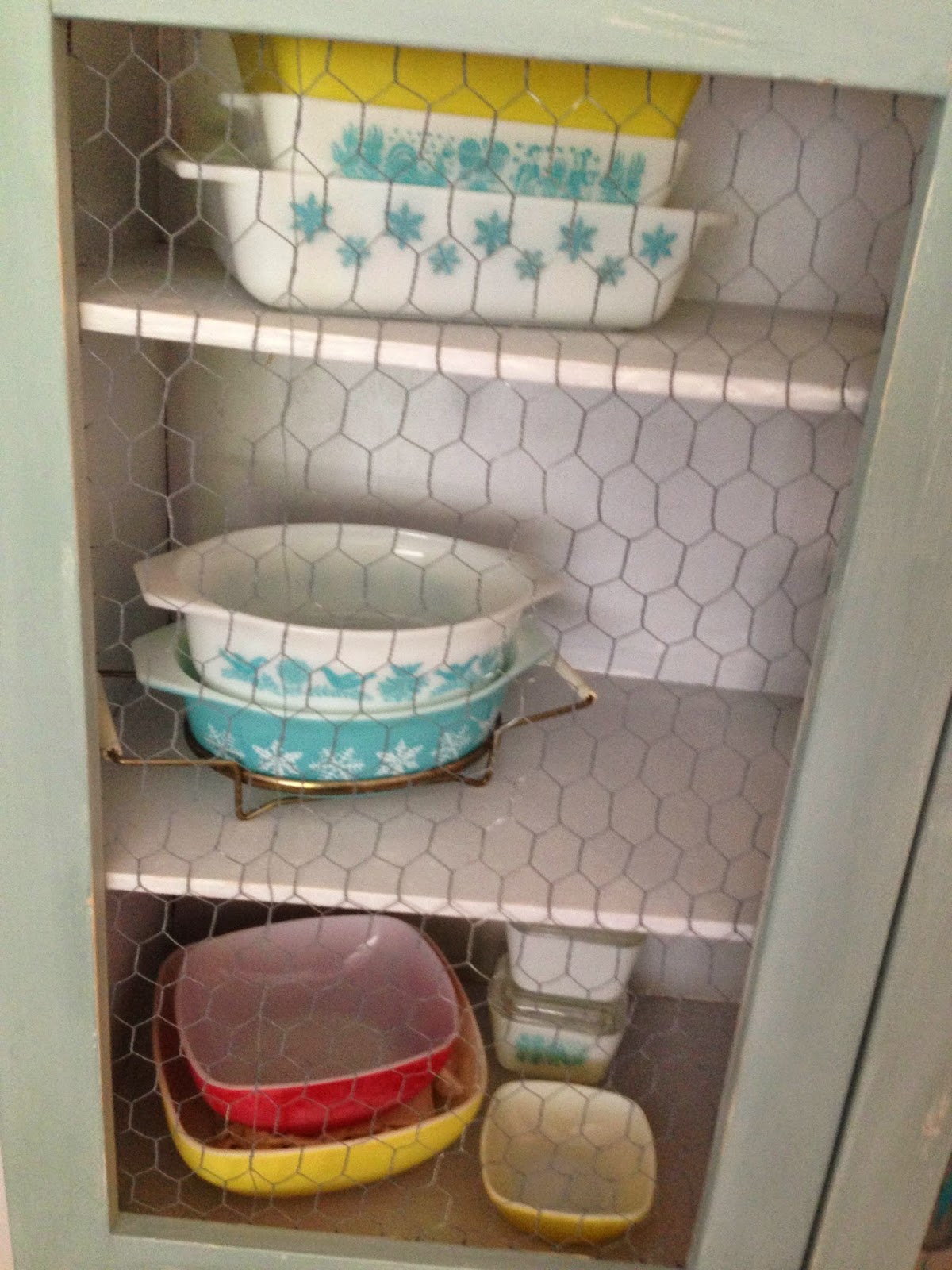 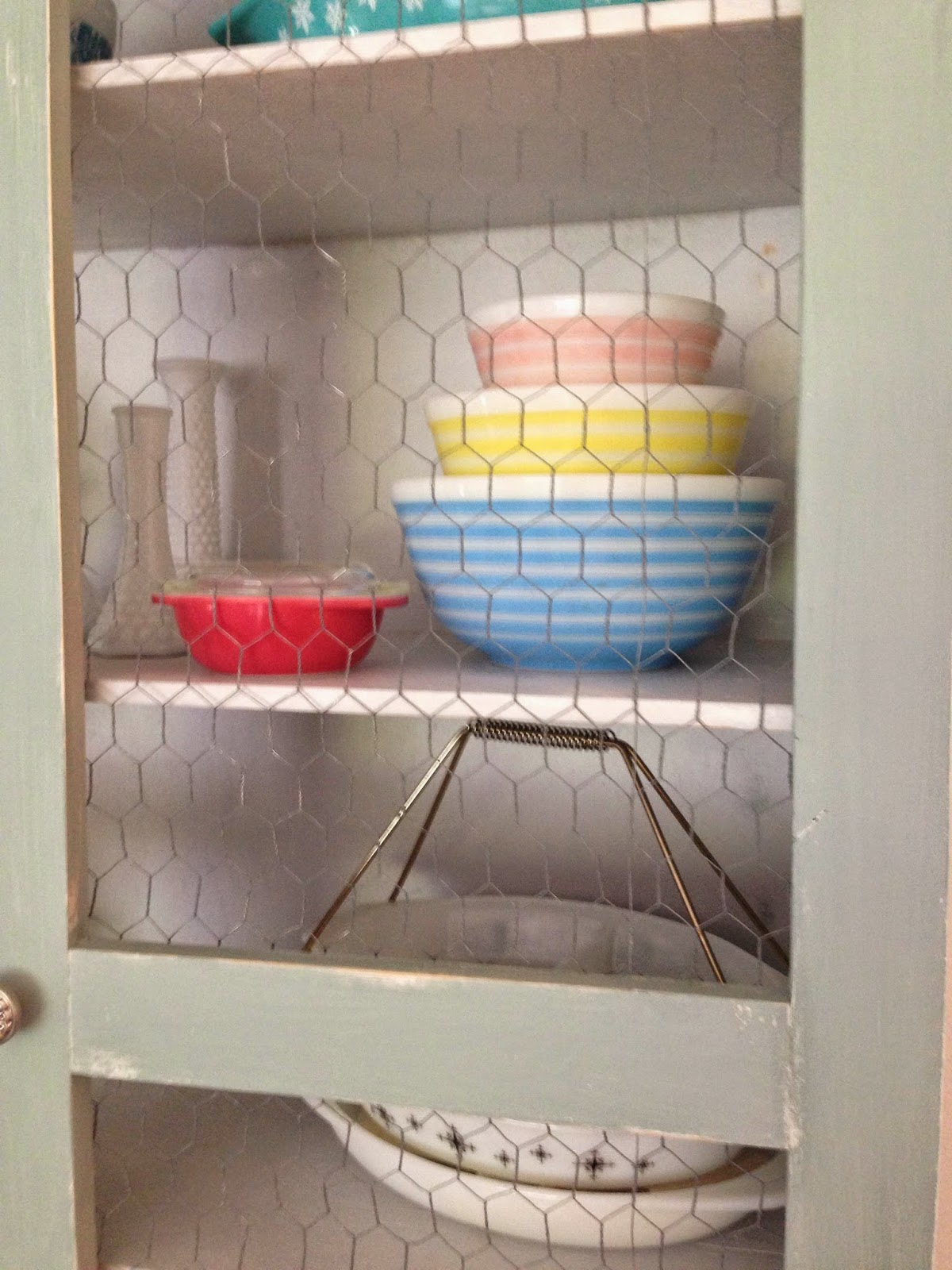 I've been on the hunt for the perfect hutch for my pyrex recently and it's been hard because the spot I want to put it is kinda small. My dad said he'd be willing to build me one. I just came across your page and this is what I want! Thanks for sharing! :)

Glad you found this! We've had it for a year now and it's still in great shape. I just keep adding pieces to it. I was worried the weight might end up being an issue, but none of the shelves had any problems even though I keep expanding my collection. :)