We had a wonderful weekend with friends. The weather was pretty perfect especially out on our new patio and firepit!

Our patio was one of those projects that wouldn't seem to end. We bought the pavers when they were on sale about 2-3 months ago. We finally started digging about a month ago, and we finished last weekend.

We decided to go with pavers after my in-laws gave us over 200 free paver bricks. The same week Lowes had pavers on sale 3 for a $1.00, so we figured, why not?

Because it sucked. Dear lordy. For someone that hates to measure, it was the fifth circle of hell.  First of all, digging up the grass was fast with a tractor but getting it to anything that resembled an even surface was work. Then you have to try to keep it level as you add in the different layers. Ha. That's funny. With two children that saw it as either a sand box or a starter hillbilly pool (depending on the day) we gave up on that myth early on. 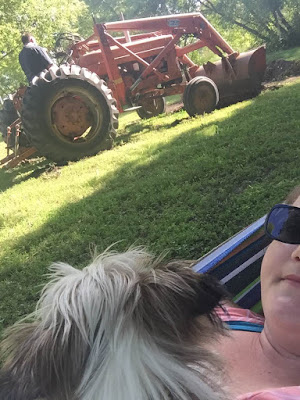 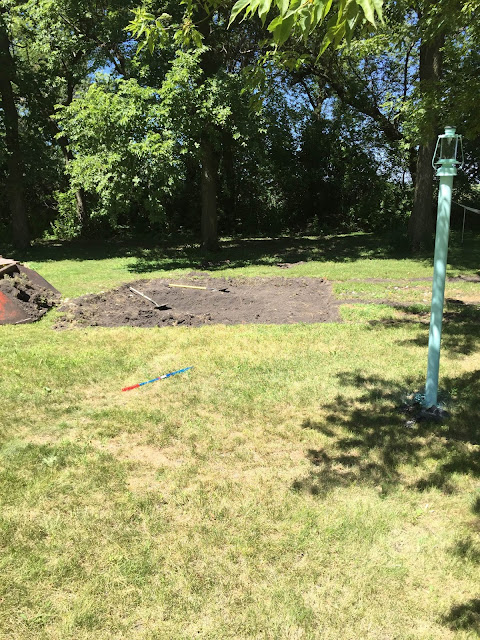 While we only spent maybe $300 or so on the pavers, the paver base and sand can add another $400 to the cost. We were lucky because my father-in-law knew a guy that could hook us up with some free rock and sand. (No. He's not in the South Dakota gravel pit mob)

When it came time to level out the sand, we just about screamed. My husband threatened to put an ad on Craigslist to find someone to finish the project. The kids removed sand at the rate we added it. They made sand castles in the area we just leveled.

My husband decided to take a nap at this point. I kept forging ahead. I decided to lay the paver edging while he slept. I got all the different tools I thought I needed to lay the patio. I worked on laying a perfect 12 by 12 square for about 3 hours.

Husband comes back out refreshed, and the first thing he says is "uh. That's not square" I step back and look from a different angle. Yes. It's not square. At all. Commence the string of expletives that would make a sailor blush.

At that moment we made a decision. How much did we value a level professional looking patio? We decided we valued our sanity, children's lives and marriage much more and just started laying bricks. We tried to keep them level as we moved along, but it isn't perfect. Which is really a metaphor of our life with two young children.

Of course, it couldn't be that easy. Remember those free bricks we got? The ones we just were sure were the same size as the bricks we bought? The free bricks that were the only reason we decided to proceed on this aggregating quest?

Nope. Not the same size. Just a hair wider and longer. Shoot. Me. Now.

So we stared at the patio in the 90+ degree 450% humidity weather. Our brains were a burnt out melted mush. The Craiglist threat became a viable solution. Finally I realized we could just do a border with the free bricks, and we survived. Since we couldn't use the free bricks, we were 92 bricks short. We just made our tri-daily trip to Lowes and got it covered. 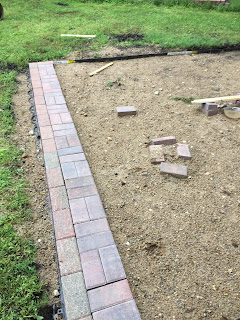 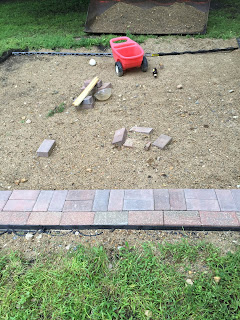 The kids were creating some sort of building with sand, bricks and wood.
Once we laid the pavers (over several days) we felt victorious. We had finished the patio. We had done the seemly impossible summer project. We no longer had a hole of mud in the backyard. 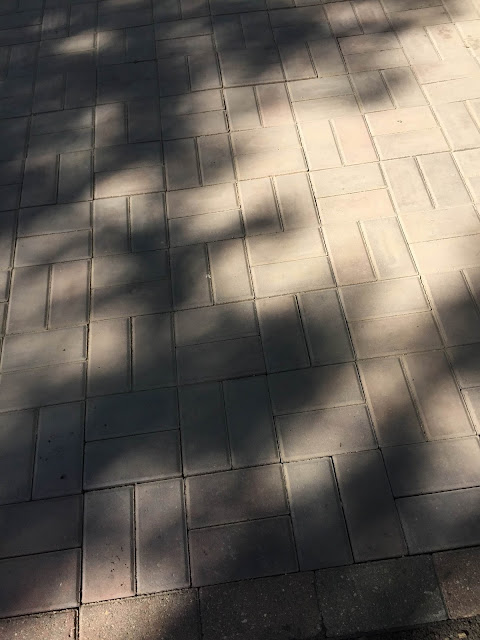 Then comes putting sand in the crevices. Easy right? Get the polymorphic sand they said. It will be easier they said. ("They" are the online tutorials I read and mostly ignored during this process)

Well once I read the side of the bucket I realized the sand wasn't going to be all that easy. Apparently you can stain the brick if there is any sand left on the surface. (Specifically, red colored brick had a higher likelihood of staining) They recommend using a paint brush to sweep into each crack. That sounds like a ton of fun. We tried with the broom first. It became very clear that we didn't have enough sand. Awesome. Another trip to the store. (Face Palm)

Also, with polymorphic sand, you're racing the clock because you need to finish and let it dry 24 hours before it rains. We checked the weather report. No rain for days. We are good to start. Next day I go back to do the second bucket. Weather report now says it's going to rain for three days starting tomorrow evening. Well that's great. I've got to get the sand down immediately.

After doing a bit  more reading on the Young House Love blog, I found I could have used less sand and had an easier life if I wouldn't have just poured the sand right on the pavers the first time around (which was what the directions on the bucket said because they are capitalist pricks that want me to buy extra sand ;) ). The Young House Love blog suggested putting the sand in a ziplock bag, cut a corner and poured it in the cracks directly ala frosting bag style. That worked way way better. I even sat there and cleared every brick with a paint brush. 6 hours of paint brushing and filling cracks later, the sand was done. I wet it down and did an "anti-rain" dance 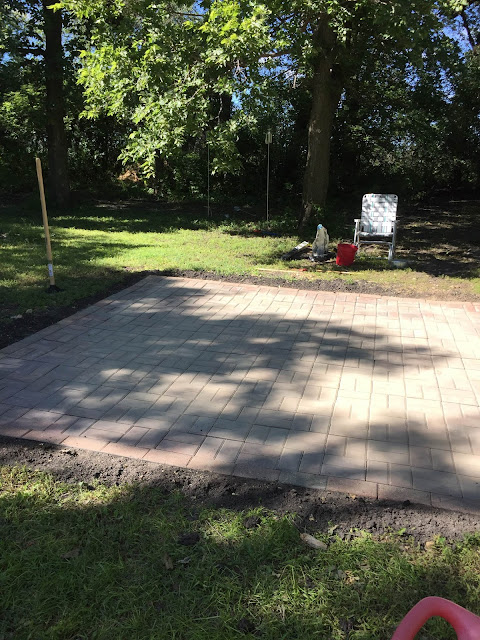 I woke up in the morning feeling rested. My bed was nice and cool, there was a nice breeze coming in, and I heard the gentle sound of rain drops on the roof. Yeah. Apparently weathermen are right on par with the accuracy of palm readers. (Bright side: I have a long life line and should have four kids)

Well the sand kinda survived and after spending 6 hours in the sun on a hot patio with a paint brush, I wasn't doing the process over again.  I moved our patio furniture out to the patio and drank a glass (okay, bottle) of wine and enjoyed our patio.

Check back next week when I talk about our much easier (and cheaper) firepit addition to the deck. Now that was a highly rewarding project I would recommend. Positive attitude restored. 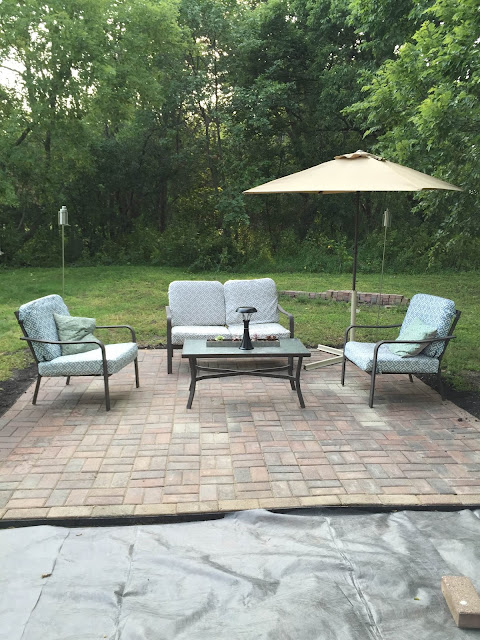 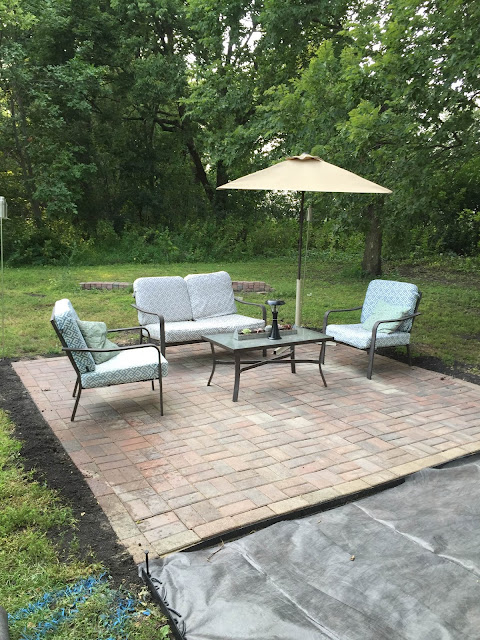