2017 is almost upon us. Thank goodness. Although this year hasn't been a great for many people, we have much to be thankful for in our house. Sweet Cheeks came into our lives, and she's a constant reminder of what is good in the world. We were able to make great progress on Ugly House. Work was pretty great for both my husband and I. On the flip side, I lost an aunt, a dog, and two cats. Then there's that election. Ugh. No other words are needed.

Since December 1st, I've been reflecting on how I can make 2017 better, and it mostly comes down to action. Taking action on the house, in my children's lives, in my work, in the community and of course, on this blog. So, buckle up because 2017 will be a good year even if I have to bend it to my will.

One big project we're still finishing up at our house is the kitchen, living and dining room remodel. We tore down the Indiana Jones Lost Tomb wall at the beginning of the summer. (Click here for that amazing before and after) We've added in a island, fixed drywall, removed all our floors & replaced them (post forthcoming on that odyssey), framed in the vertical support beams, replaced light fixtures, built a new countertop, and added a plank ceiling. We are working on trim on the floor, on the support beams and ceiling right now. One big project was figuring out how to wrap the new large support beam in the middle of the room. 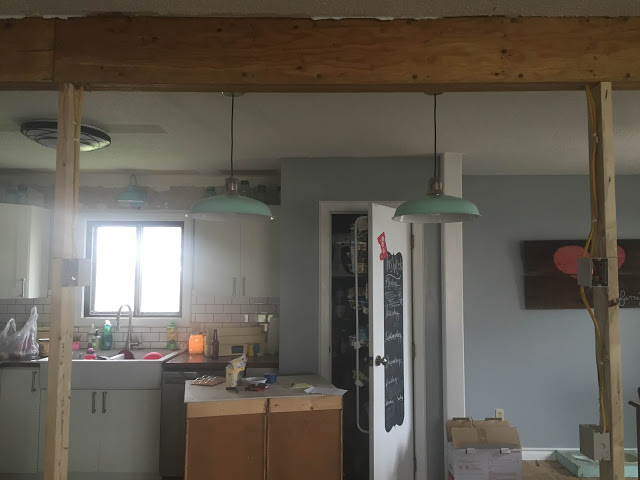 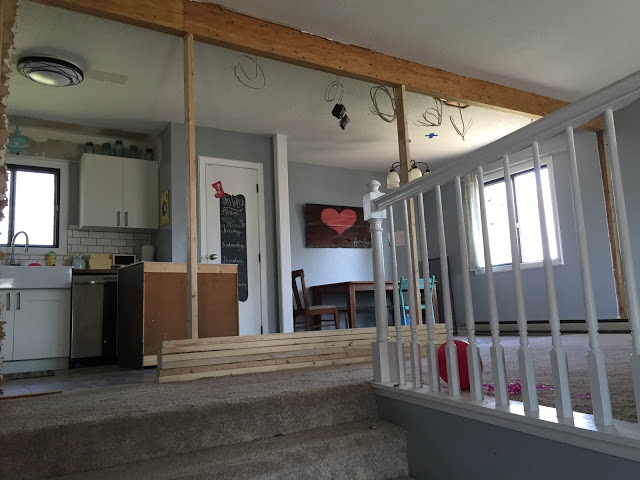 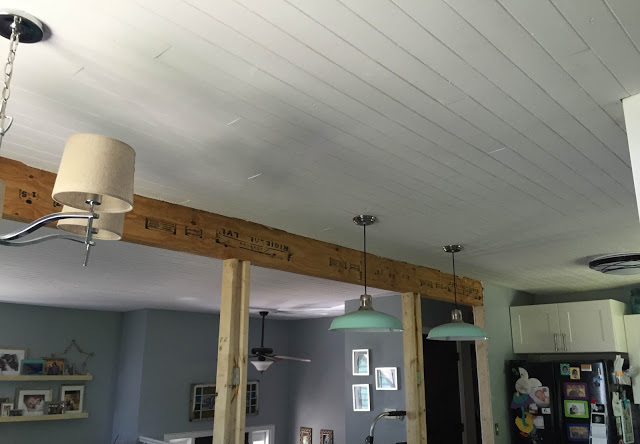 
I would like to go on record that I liked barn wood before it was cool. Before Fixer Upper made everyone want to put barn wood or ship lap into their house (including myself because I want to force the Gaines to living in my house and do work for free...just kidding..kinda). I have always loved old stuff. I collect vintage Pyrex, collected antique books growing up, and of course, I have Myrtle. So, while my house is probably more on trend now than I ever thought it would be, I hope it also has some staying power. When we bought Ugly House, it was my vision to make it fit into the farmhouse idea since we live in the country. She might not be old, but I wanted to make sure she felt like she was.

Now that barn wood is all the rage, it's very difficult to find it! We were going to to try to salvage some barn wood from the barn we got our headboard from, but the wood was too brittle. We asked around (one plus of having a large animal veterinarian as a husband), but no one had a piece that would be long enough to go down the entire beam.

My husband was over at his parents one day to cut some boards and noticed their large shed had long pieces of wood along the bottom. He went in to talk to his dad and asked if it would be possible to remove some of the wood if we replaced it with new wood. He didn't have a problem with it, so suddenly we had wood. (That's what she said..he..he..he)

I was about 6/7 months pregnant, and the husband thought we could put this 20 foot piece of wood up ourselves. Nope. That was a whole lot of nope. First problem: he decided he would hold the entire piece of wood while I drilled it in. Second problem: at the time we didn't have an impact drill, so to get through the wood, we had to use quite a bit of force. I wasn't quite tall enough, so I was drilling above my head. (Why didn't we get the bigger ladder you ask? I don't know. Don't ask obvious questions.) So picture this...6/7 months pregnant, I was leaning in trying to drill above my head while the husband is channeling Hercules holding 20 feet of thick solid wood. What could go wrong with such a safe smart plan?

Of course I slipped and tried to drill a six inch screw through one of my fingers. He knew better to ask me to try again, as I was ugly pregnancy crying and cleaning my wound in the sink.  He called his dad over to help, had him bring over the impact drill and ta-da, a couple hours later, it looked pretty darn amazing.

Oh, there's another thing to be thankful for. Father-in-laws that give you free wood, bring over the proper tools and dedicate an afternoon to helping remodel your house. Just like my dad and uncle that helped install an entirely new kitchen and our neighbors that helped bring in our countertops at 8 o'clock at night. As my new secret best friend Jen Hatmaker would say, "Love People. Love God. The End." I have many people to love in my life. 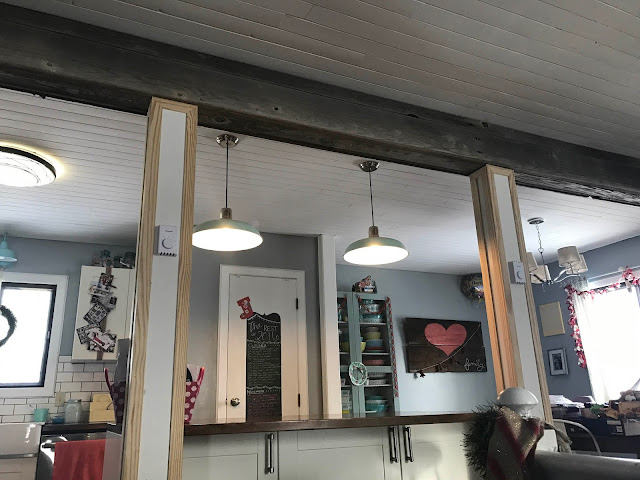 Almost done with the trim around the support beams. Just need a coat of paint! :) 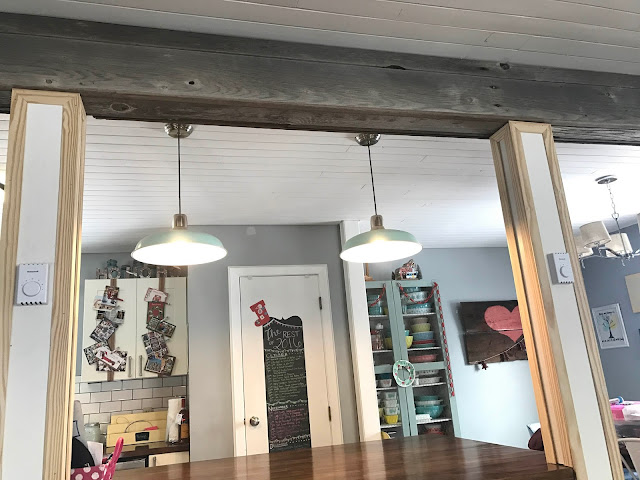 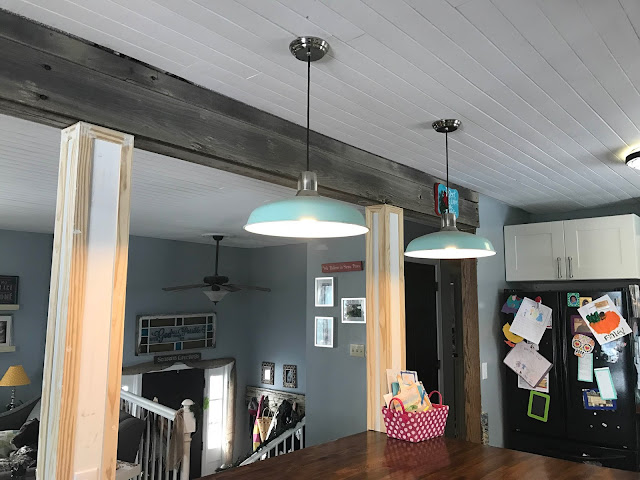 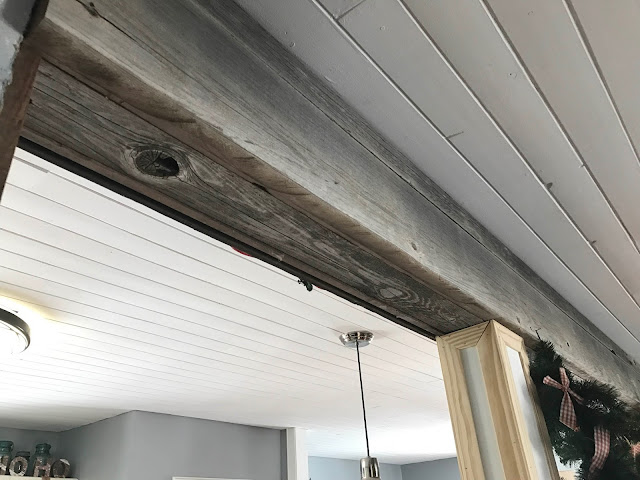