Another tutorial involving foam board & an Exacto knife. You can do quite a bit with these two supplies. That's pretty much been my theme for this party.

I was going through my Christmas decorations since I'm planning on reusing some decorations for the party, and I found some tabletop Christmas trees. They were the wrong color, but they gave me an idea to create my own standing trees. I figured since I was going to use foam board, I may as well make big trees.

With just four pieces of foam board, you can create 2 large trees, 2 medium trees and 4 small trees. Don't think this is just for a Frozen party. You can create these trees for Christmas, prom decorations, camping themed parties or even change up the shape and create stars, people, or other characters. As long as you can draw the design, you can make a 3D shape. 
Foam Board (4 pieces @ $1.49)
Exacto Knife
Pencil
Cutting Board (you could use a spare piece of wood as well or cut off the side of a table)
Glitter & Mod Podge/White Elmer's Glue OR Glitter Blast Spray Paint
Paint Brush
Clear or white tape (Clear packing tape works well)
Optional: Snowflake Die cuts & Hot Glue.

You will want to outline a tree with your pencil. I marked center and did straight lines using a metal meter stick, although you could just free hand the tree. Using your Exacto knife, cut out the tree. After you have completed one cut out, use the cut out to trace a second tree. Keep the scraps! That's how you're going to make all those trees. Repeat on the other two pieces of foam board. You will now have four cut outs of trees, which will be enough for two standing large trees.

This the step that I had a learning lesson after my first one. On the first one I didn't slit the top of one of the trees. You must do that!

On the first tree, cut a slit no bigger than the thickness of the foam board down the center of the tree. It's best to error on the small side. Start at the bottom and go up to the top branch of the tree. Hindsight being 20/20, I would take the extra time to measure a straight line down the center so the tree wouldn't tilt. I got lazy towards the end of my tree marathon.

On the second tree, cut a slit from the top down to the first branch of the tree. Again, error on the small side. If you go too large, the tree will be wobbly and will probably need to be secured with tape. 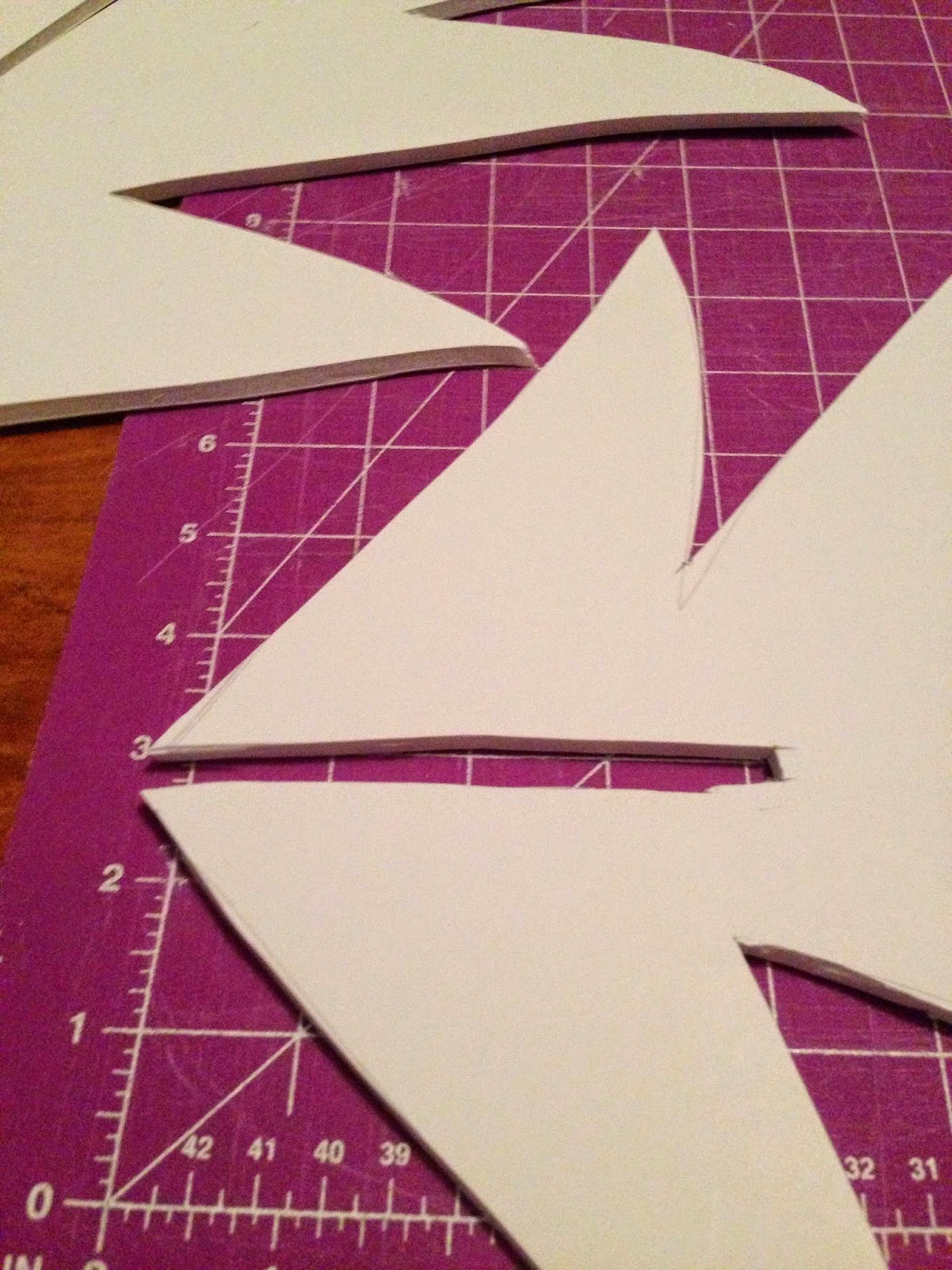 Now your two trees should slip right into one another. Ta da! A standing tree! Repeat on the other two pieces of foam board. Now you have two standing large trees. Good for you!

I did promise 8 trees with just 4 sheets of foam board. You can make 2 medium trees and 4 small trees from what remains of the scraps.

You'll have a bit of scrap left over from where you cut the base of your large tree out. Use those eight scraps (two from each sheet of foam board) to draw small trees. Follow the same steps you used to create the large trees i.e. cut a slit up the bottom and down the top.

Now you'll want to jazz up those trees. If you're going to do some Frozen trees, you can glitter blast them. If your doing something else, just give them a good coat of paint.

I did two different methods and both worked out about the same. First, I took some Mod Podge I had sitting around and mixed in a ton of iridescent glitter and some blue and purple glitter. Then, I painted on the glitter mixture. The iridescent glitter makes the mixture a bit chunky so it looks a bit more like snow and the entire thing will sparkle. This was the most time consuimg step.

After I used up all the Mod Podge I had in the house, I decided it was silly to spend the big bucks on Mod Podge and went for the cheaper route. I grabbed (and used) two bottles of white Elmer's glue. It worked about the same as Mod Podge and was about half the cost.

After spending hours painting glitter and having a glitter explosion all over my living room, I would recommend trying the glitter blast spray paint. I think the extra cost would totally be worth the time you would save. If you try that method, let me know! I'm curious to see how well it works. 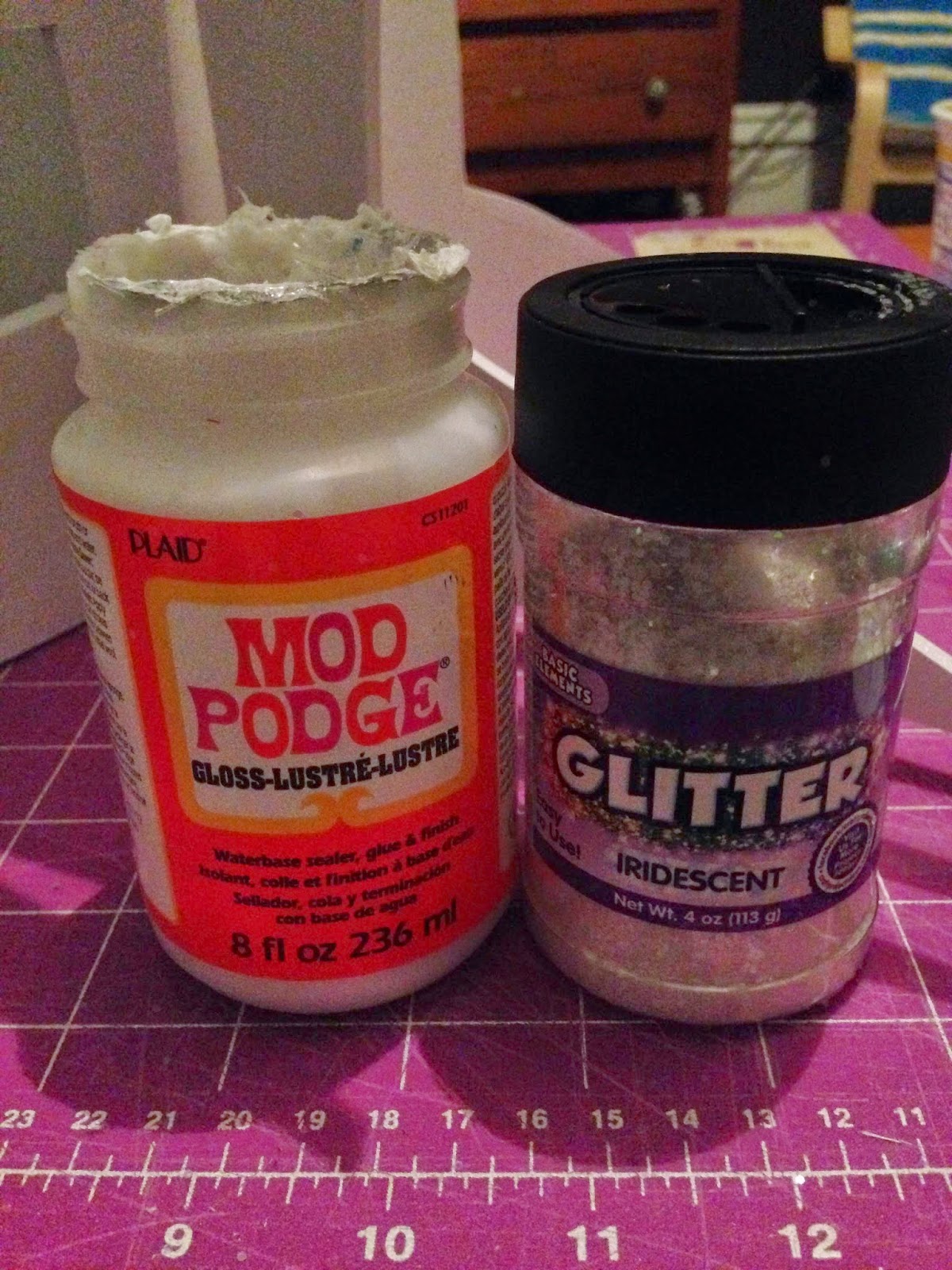 You could definitely be done at this point. I decided to go a bit further and use some snowflake die cuts I had sitting around to jazz up the tree. Using hot glue, I stuck the snowflakes to the tree.


I wanted to create the appearance of icicles, so I gobbed a ton of hot glue on the edge of the branch and let it drip off. After the glue was dry (or close to being dry), I cut off the excess. A nice little icicle remained. 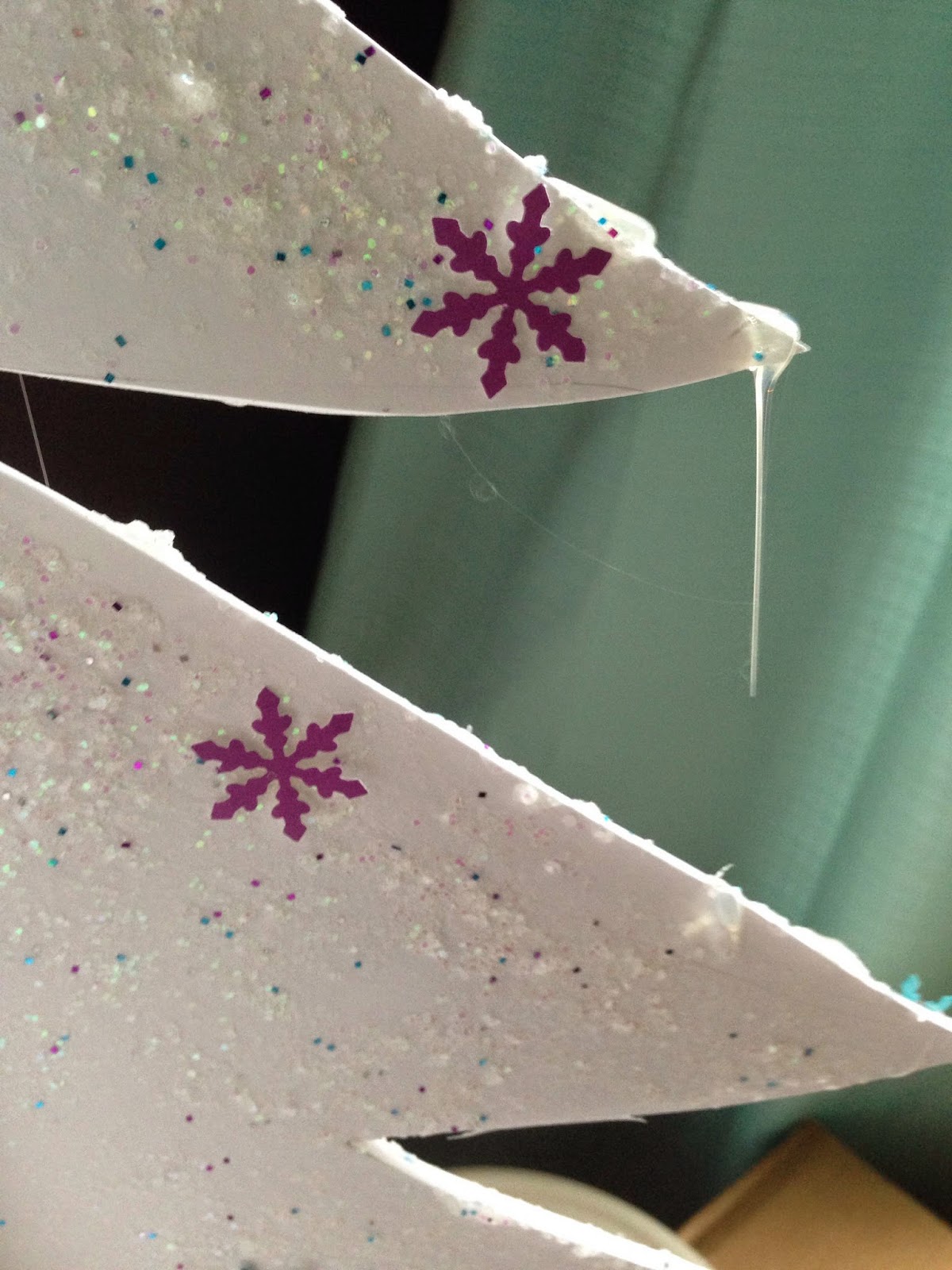 My trees are complete! I'm very happy with the way they turned out.