One of my favorite things is to hand make decorations and party favors. I try to avoid buying branded items, not because I think there is anything wrong with them, but it's a nice activity to do together as a family. Last year, I made stick horses for our Toy Story/Jessie theme. (Visit that party run down here). Since my daughter is older now, she understands what we're doing and has the patience to sit down and help. Mod Podge was a huge hit on this project...so much so it's on my table, couch and husband's tie. Don't get me started on the glitter situation.

So, I'm going to do a post about each DIY project, and then do one big round-up once we have the party. (Round up done! Check out all the projects here!)

The first project I did last night was snowflake candle holders. I'm sure I won't put actual candles in them (call me crazy but seems like preschoolers and open flames shouldn't mix), but I'll do some Christmas lights or LED candles. 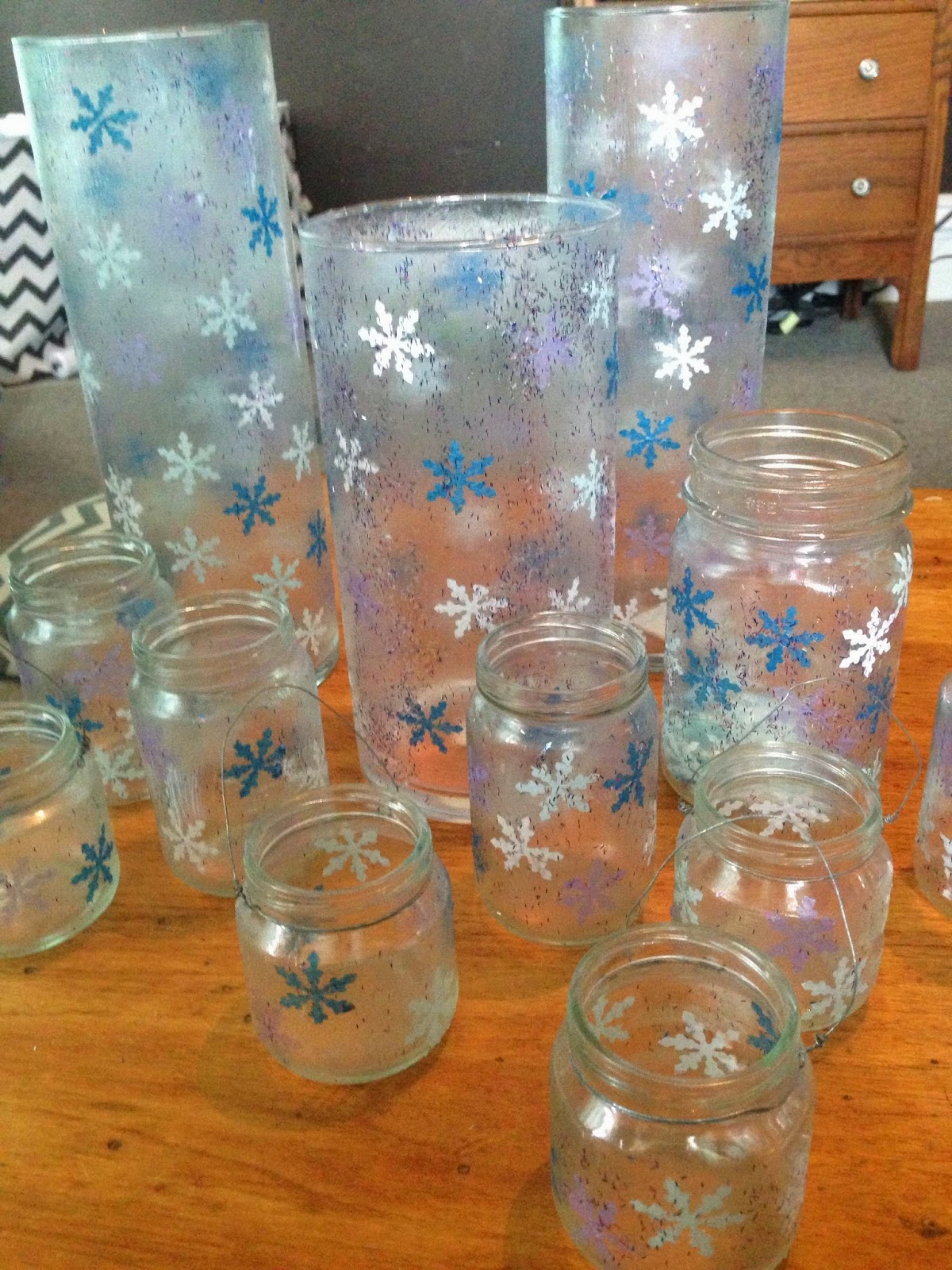 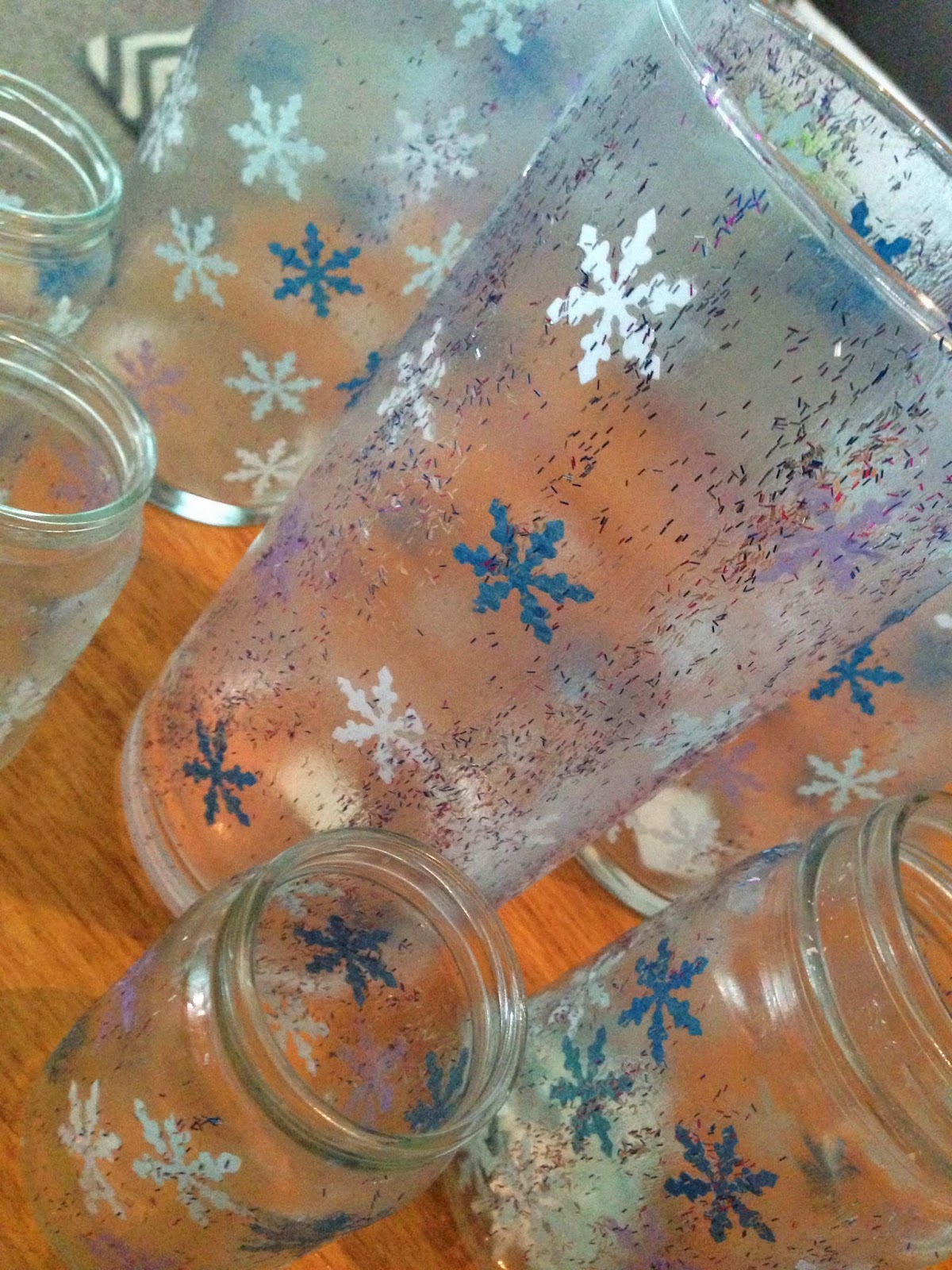 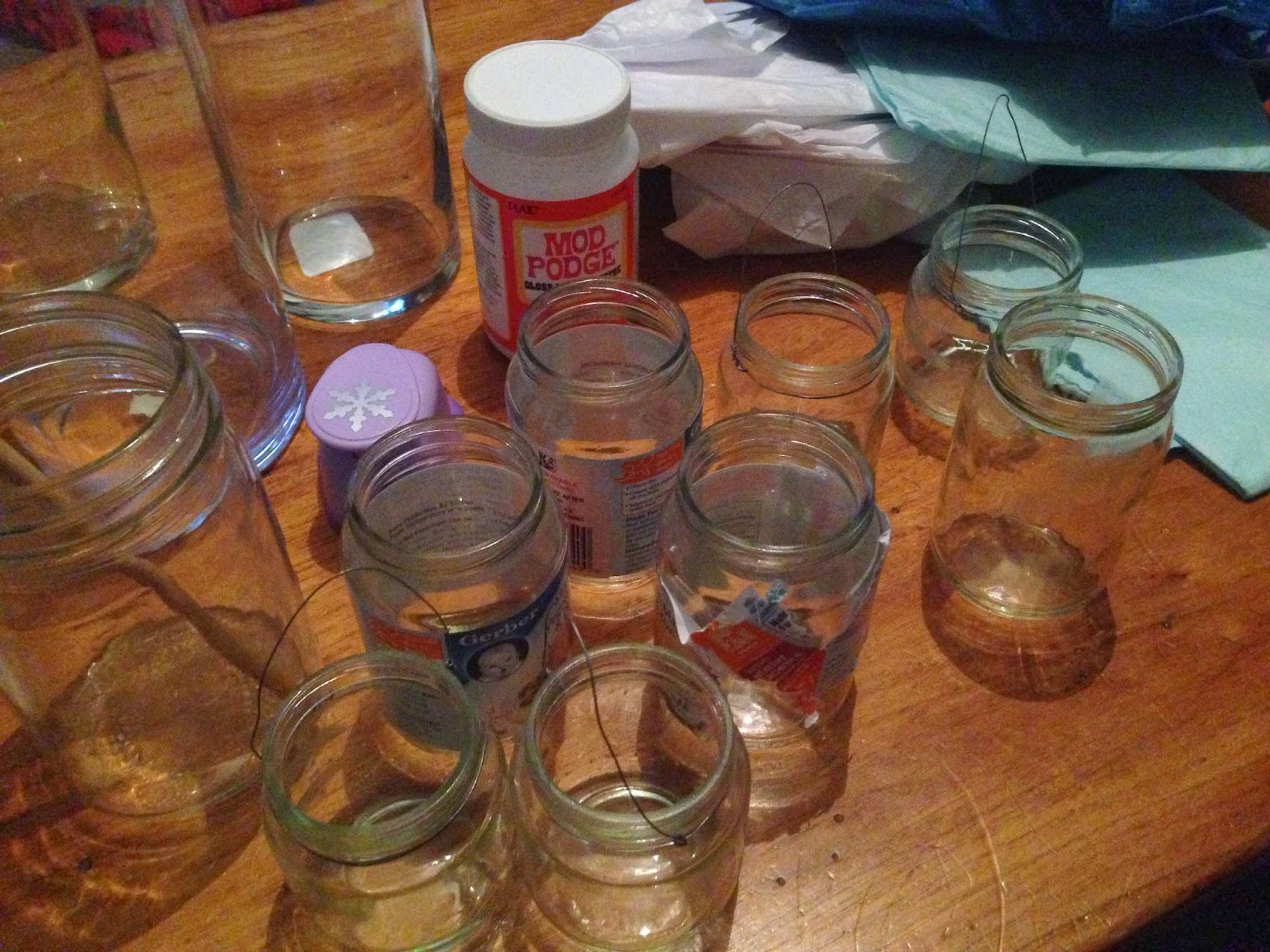 Glass Jars, Candle Holders (I used what I had on hand: vases, mason jars & baby food jars)
Mod Podge (Not much was required. About 1/10 of a small jar)
Tissue Paper (About 4 sheets)
Decorative Hole Puncher
Optional: Glitter

You will want to cut out a ton of shapes. Cut so many shapes that you'll think that it will be more than enough and then double that. I used four colors that I had in my tissue paper stash (blue, aqua, white and purple). Yes. I have a stash of tissue paper. I am a complusive gift bag and wrap horder. Tissue paper has it's own drawer in my craft room, and it's folded the same size and color coordinated. Yes. It's a OCD's dream.

I folded the tissue paper several times over so I would get more bang for my buck when I cut the shapes out. Now, if you are having issues with the tissue paper getting caught in the hole puncher, you can grab a piece of printer paper and fold it over so the tissue paper is the inside of a paper sandwich. You won't be able to get as many sheets through with one cut, but it does keep things neat.

As you can see in my picture below, which looks like an angry snowflake man, the tissue paper does rip. The more intricate the hole puncher, the more issues you're going to have. 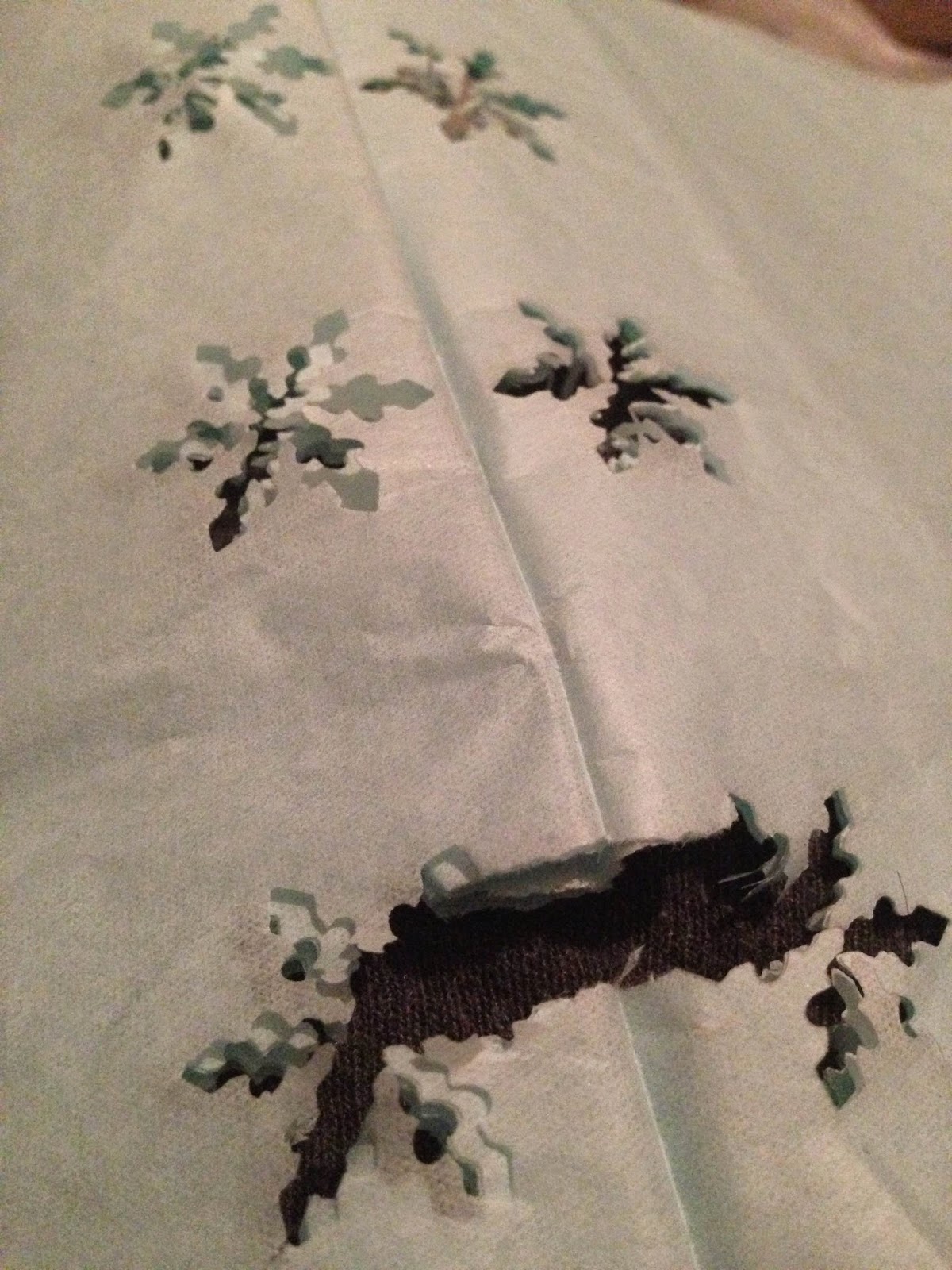 I'm sure most of you aren't new to the land of Mod Podge. Even my husband knows how to use it. You will want to do a small layer on the glass, and then you'll want to put the snowflake on top. I had a heck of a time picking up the snowflakes without ripping them and getting them on the glass without folding funny. The easiest way I found was to first separate out all the cuts (since they will be stuck together if you did multiple sheets when you cut them.) Then, use the wet tip of the paintbrush to pick up the tissue paper snow flake and place on glass. Working from the inside out, smooth out the snowflake. Sometimes they fold funny, but I figure that not all snowflakes are the same anyways. Right? 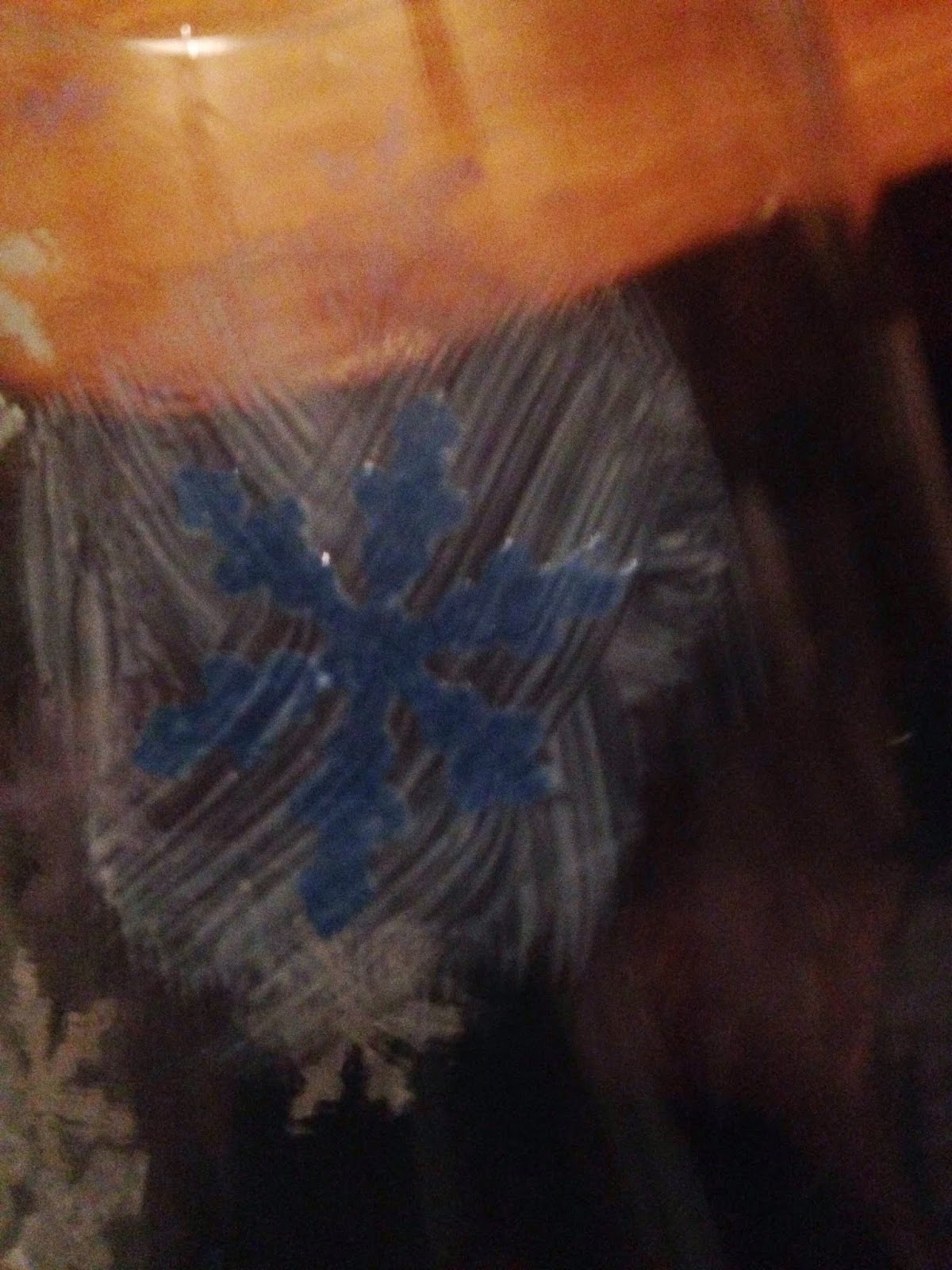 3. Final Coat (with or without glitter layer)

After you have all the snowflakes on the glass, you can seal in everything with a coat of Mod Podge on the top of the glass. I was thinking while I was doing my layer, that I should have picked up some of that special Mod Podge glitter variety. Then I realized, that I could create my own glitter layer. So I poured some Mod Podge into a little bowl and added in some glitter and stirred well. It worked pretty good. It was a bit clumpier than the actual Glitter Mod Podge would have been, but it worked for what I had on hand. 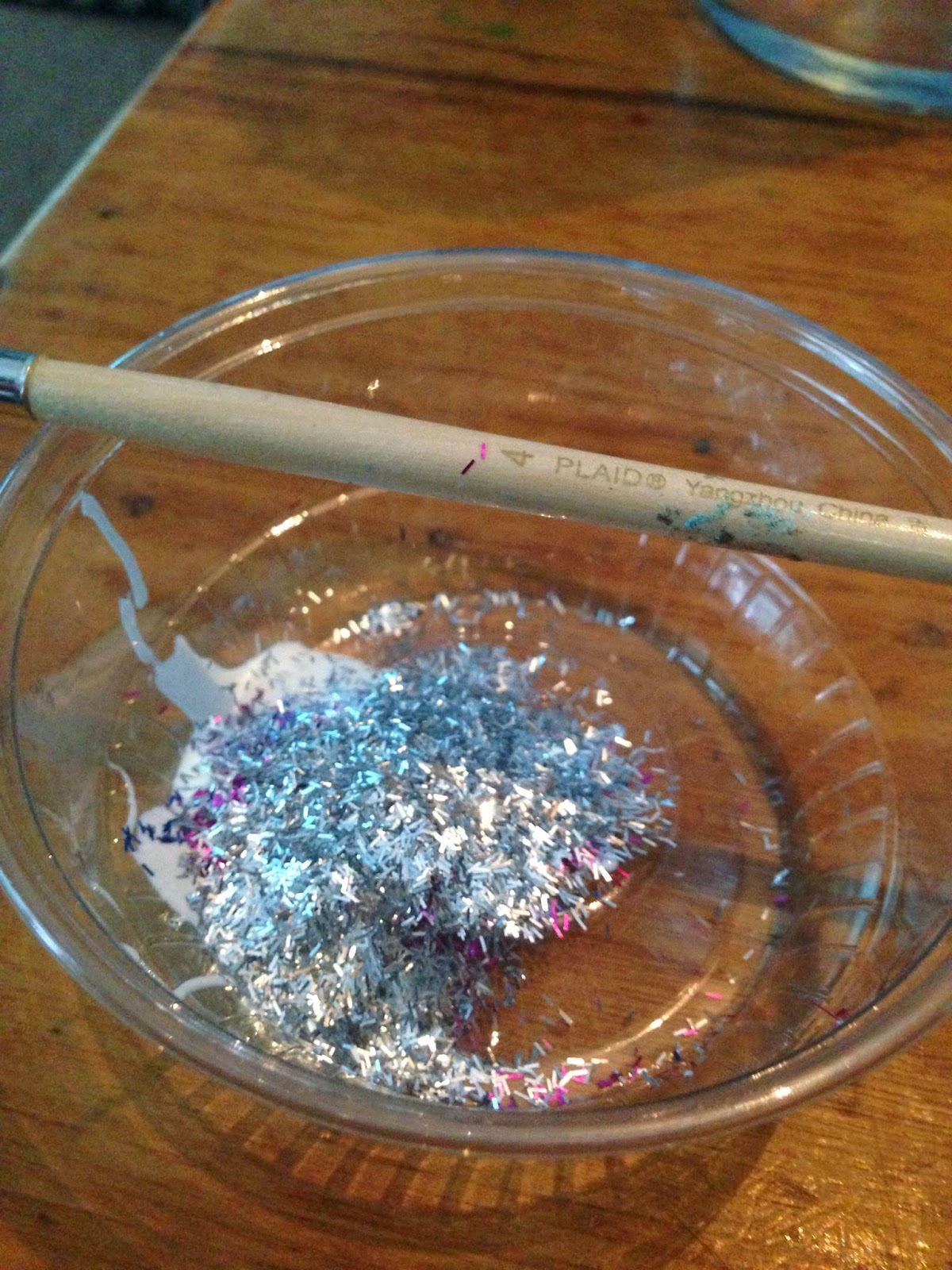 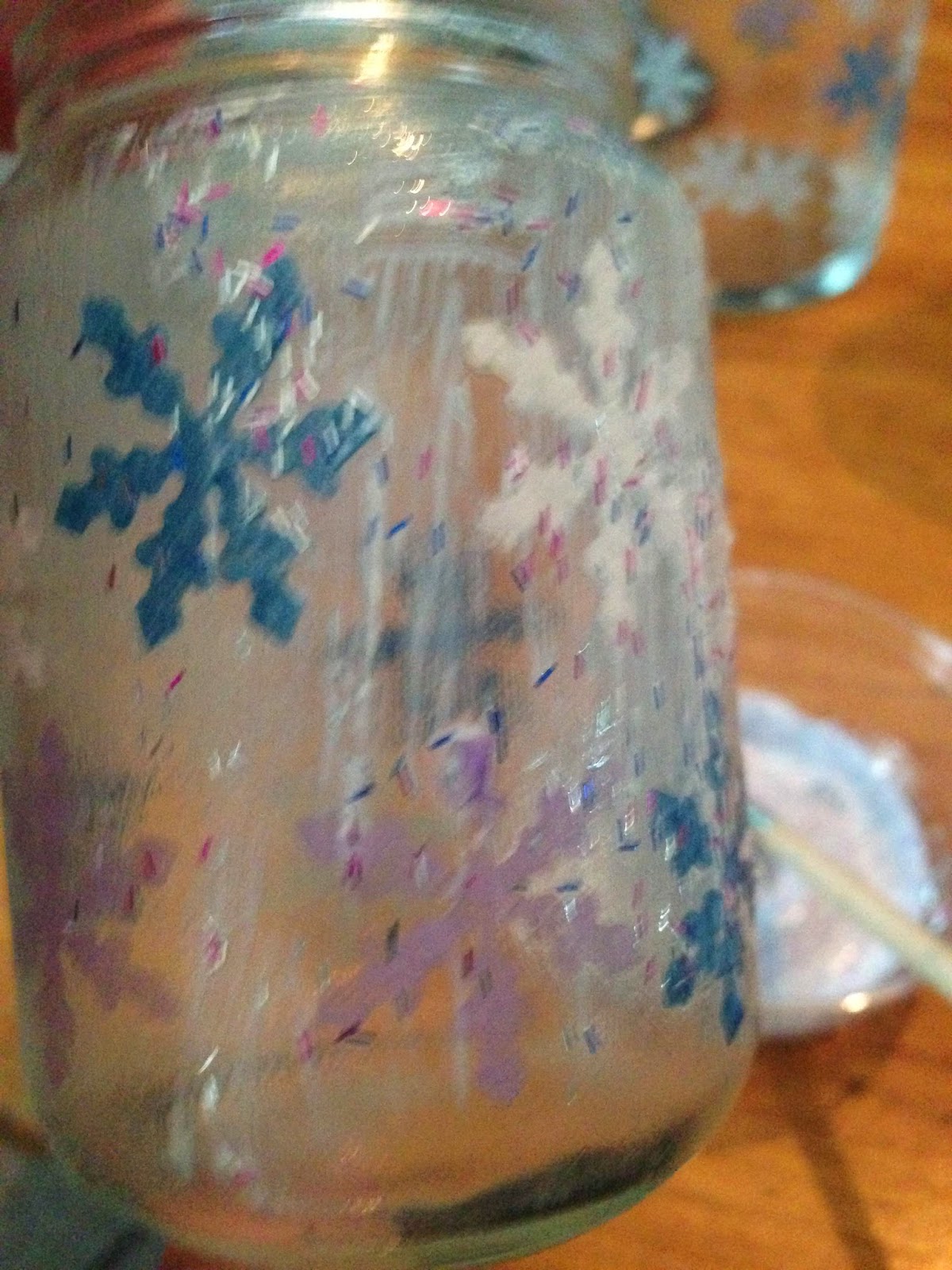 I'm going to either put some lights in the jars, or maybe fill them up with some Frozen themed items like fake snow or jewels or something. The great thing about the Frozen theme is most of the stuff I'm making I can add into my Christmas decor collection. These jars will definitely will be used again for Christmas. 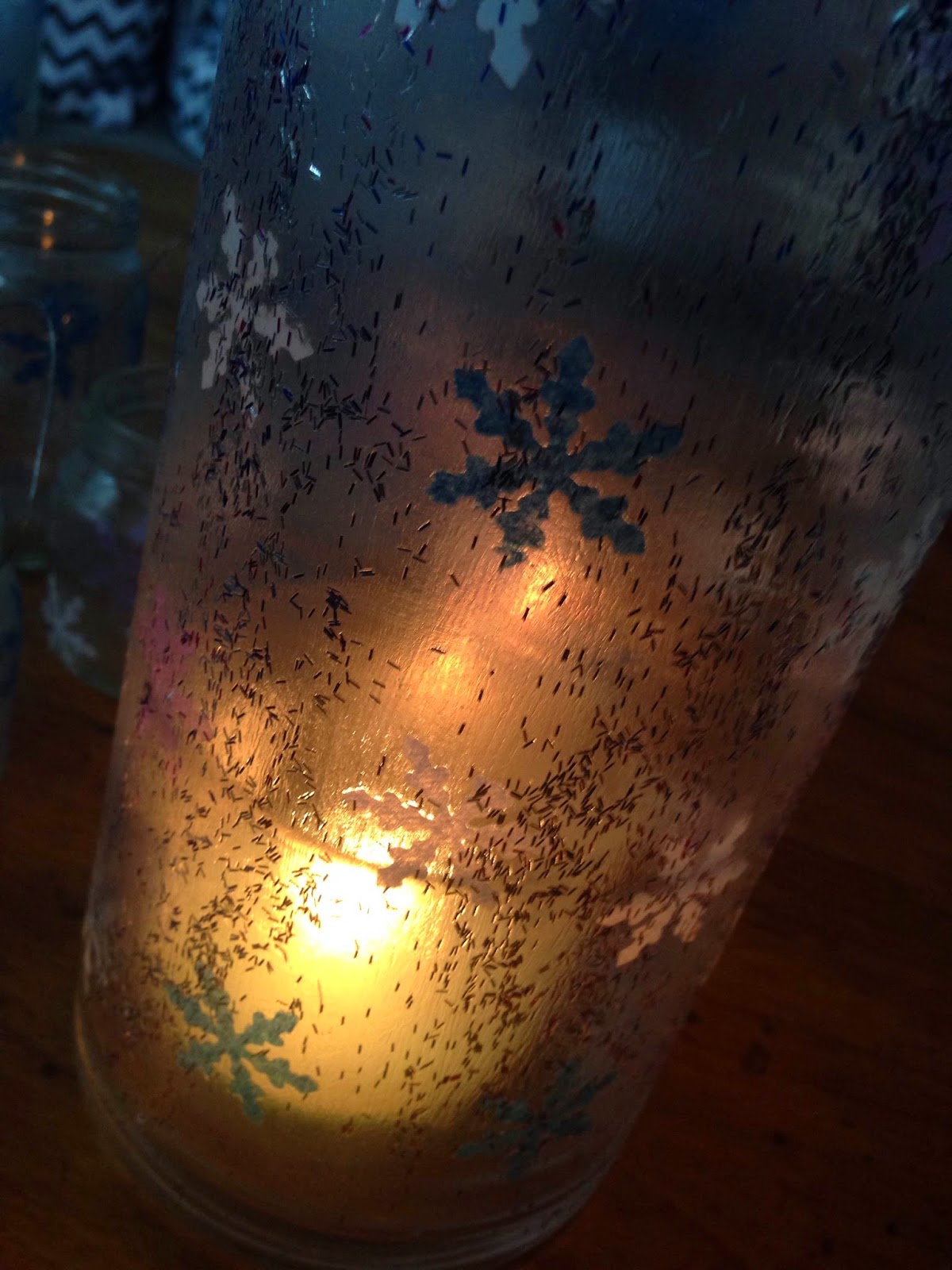 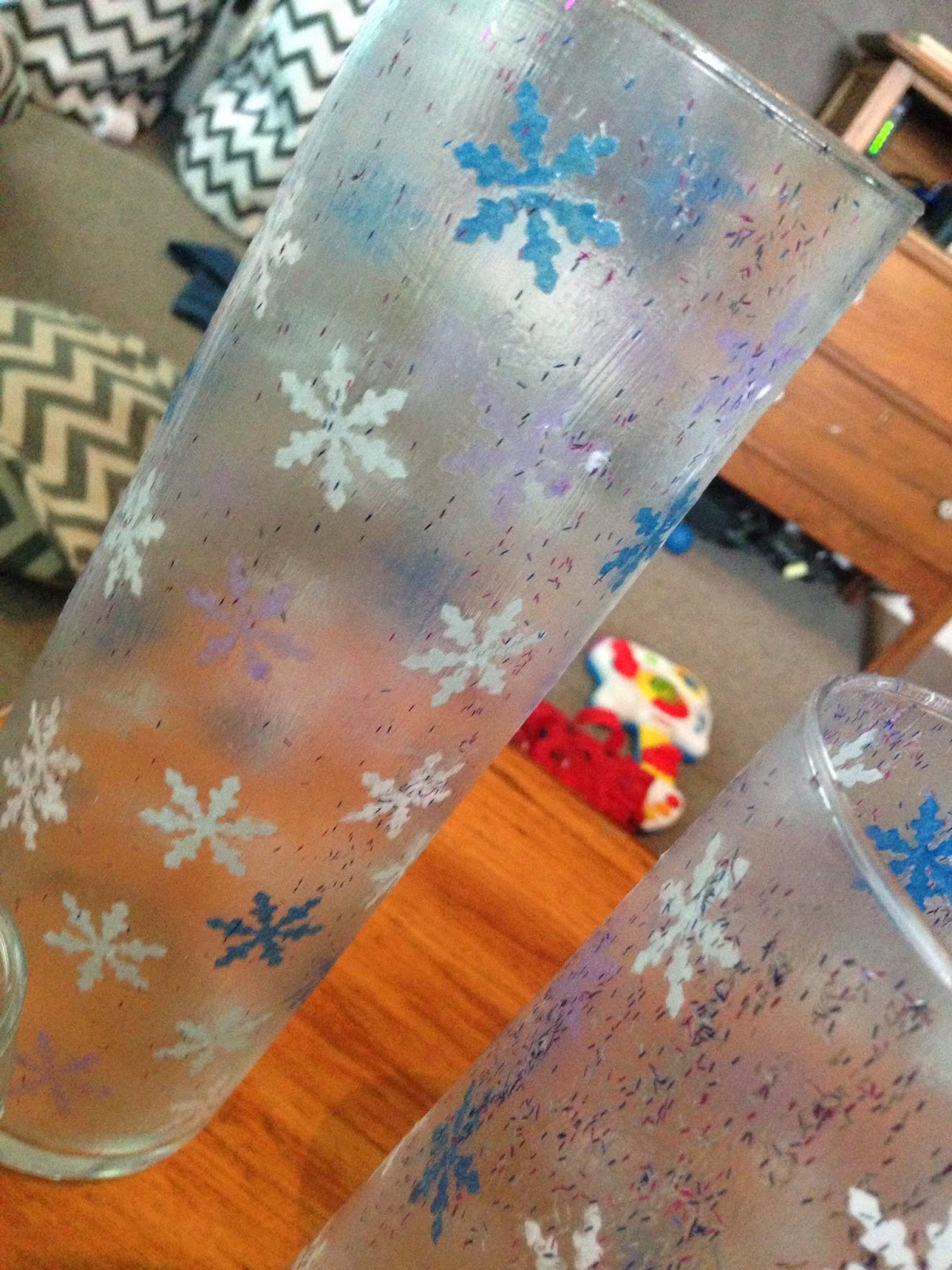